Well, dear readers, it is Thursday again, and this autumn this means it is time for our weekly date with yet another 17th century enthusiast. I stumbled upon one of my guest’s books a couple of years ago, a rather dark story involving fraternal twins and their anything but happy lives, this due to the fact that being born as twins in the 17th century had the superstitious among the then living accusing the poor mother of adultery. Unfortunately for this particular set of twins, their father was one such superstitious fool… Anyway: Katherine has written several books set in the 17th century, mostly books that highlight how the political turmoil of the time directly or indirectly affected those who were relatively far from the centres of power.

Katherine has also shared with me that she is left-handed, and that this comes with quite some challenges when following knitting or crocheting patterns. Erm… I know how to knit and purl, but have never read a knitting pattern in my life, so it took me some time to work out (empirically, of course. Us historical fiction writers like to go empirical when trying to grasp things, hence my lye soap attempt some years ago) just WHY a knitting pattern written for a right-handed person wouldn’t work for a left-handed person – they knit in opposite directions!

Well, enough about that. Instead, join me in welcoming Katherine Pym to my blog and let’s kick off with asking her why she’s so fascinated by the 17th century!

Katherine: This century is ‘packed’ with the most amazing history, from the transition of the Tudors to the Stuarts, and Mary Queen of Scots’ son, James, the very person and royal house Queen Elizabeth did not want on the throne. This century had religious wars and conspiracies, the Glorious Revolution, a great fire and plague, battles at sea to determine merchant superiority. How could one not love such a variety of rich historical detail that could be made into unforgettable stories? 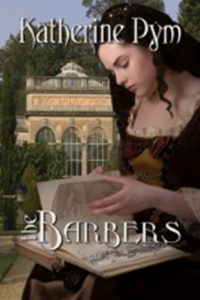 Katherine: Samuel Pepys inspired me. I found his entire diary in a used bookshop and began reading. Filled with current everyday detail and language, I began to study the era, especially 1660-1666, from the Restoration to when London burned, which I detailed in ‘Highwayman’.

Katherine: I have several books on amazon and other outlets, but I’ll talk about ‘Highwayman’, a finalist in Discovering Diamonds Review. This story is sort of a sequel, but still stands alone, to ‘Erasmus T Muddiman’, historical fiction of young boy and his brother, Desiderius, who lose their parents to the 1665 plague and leave London only to fall in league with a highwayman.

‘Highwayman’ is meticulously researched without being pedantic. One falls into the story and walks the lanes with Geoffrey and Erasmus as they steal from the rich and give some of their gains to the poor, especially the wherrimen who lost their positions due to the plague and press-gangs. (There’s a war on you know, all fought at sea.)

Katherine: Absolutely, and am thinking of the time frame of Titus Oates, who was instrumental in the imprisonment and deaths of supposed Catholics. Titus was a despicable character. (Anna: Couldn’t agree more. Horrible man!) He’s an easy comparison with Joseph McCarthy who persecuted suspected communists. In both eras men turned against neighbours and friends. They turned in family members. Harsh times.

Katherine: I am working on an almost present day story of a young woman whose husband ran off leaving her destitute with two young boys to raise. It is a story of a broken woman who rises out of the ashes into the light. It is cathartic in some ways.

Anna: that sounds like an interesting read, despite not being set in times of Glory and Gore. Like most writers passionate about a historical era, Katherine has written several posts about the 17th century. Here are some of her posts – and I just love the one about the murderous innkeepers!

Deviousness in the bedroom. There was a notorious couple who had an inn near today’s Heathrow Airport who murdered wealthy customers as they slept.
https://bwlauthors.blogspot.com/2020/08/murder-in-bedroom-by-katherine-pym.html

This post is about “iatrogenic regicide” of King Charles II. The poor guy suffered quite a lot under the learned physicians. Several days into it, King Charles apologized for taking so long to die.
https://bwlauthors.blogspot.com/2020/07/death-of-king-charles-ii-by-katherine.html

Another oft-spoken event is the Great London Fire of 1666. The below blogspot talks about it, the loud noise of fire, what people did to save their goods, and how the City tried to stem the fiery flow.
https://bwlauthors.blogspot.com/2020/05/the-great-london-fire-by-katherine-pym.html

Katherine has chosen to share a short extract from Highwayman 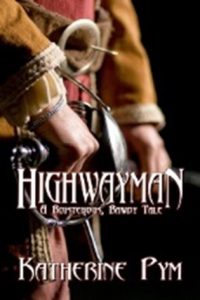 Cook pointed to the maid. “You stay here with the corpse and watch for any devilry.”
“Aye, Mistress.” The girl did not look happy.
“Well then, off to the kitchen.” Geoffrey led the way with a bounce in his step. “Light the candles. Let us put this moment to music. Does anyone have a drum, a lute or a pipe?”
The servants fled to the cellar and brought back barrels of nappy ale, red and white wines from the Rhenish House. Cook fed the coals and soon the heady scent of roasted meat wafted about their noses.
Instruments appeared, which the old man in the coffin would despise. Geoffrey grinned and tapped his foot to a lively pipe and lute tune.
“Everyone’s quite merry,” Anne commented as the servants, filled quickly to their calves with drink, danced a jig about the chamber. The Udalls gambolled, big grins on their faces. Erasmus and Reginald twirled around, sloshing ale from their cups. A chair crashed, followed by loud guffaws.
Geoffrey shrugged. “We all deserve some mirth after what has recently occurred.”
“I think there’s a barrel of mum beer, sir’s favourite,” shouted James. “I shall get it.” He ran downstairs.
Suddenly, unholy screeches enveloped the house. Merry jigs halted; fear danced upon the servants’ miens. Whilst lusty pipe notes flattened, everyone fled to the parlour.
Grandfather’s cadaver grunted and groaned. His arms flailed. Linen still upon his face, he cried, “I doth knew it. Thou art eating me out of house and home. I shall cry up the constable for riotous, thieving behaviour. You’ll see the dark side of gaol this very night.”
The corpse sat up, his hand brushing against the maid, who fell into wild screaming fits. “Spectre, spectre!” Goggle-eyed and slathering, she grabbed the iron pan from the hearth ash and swung it above her head.
Too shocked to react, Geoffrey stood rooted to the spot like a damned stick.
With a mighty heave, the maid clapped the ghostie on the head, a froth of soot flying about the chamber.
Bone cracked, a loud gasp stilled the babble. Grandfather’s carcass fell back into the coffin.
The maid’s shrieks echoed off the walls.
Geoffrey motioned to Cook, who took the girl into the kitchen.
The linen having fallen from Grandfather’s face, his features were in calmer repose. Blood ran in a thick stream from his temple down to his ear, then flooded the darkened planks of the coffin. Geoffrey replaced the linen as blood soaked into it.
He heaved a sigh, for the old man was at last completely and utterly dead.

Phew! That poor, poor maid! Thank you for that, Katherine.

Author bio: Katherine Pym and her husband divide their time between Seattle, WA and Austin, TX, which is a paradigm switch with the politics, weather, and terrain. It takes some getting used to after several months in one area. Katherine loves history, especially Early Modern England, where most of her stories originate. 17th century London has so much going on, so many human interest stories, she could immerse herself in the time as if she lived then.
Maybe, she did.

A story of corruption and greed in London 1666

A story of medicine and science during Restoration London

I hope you enjoyed this post! Don’t miss Christina Courtenay’s post from last week, and be sure to check in next week when it is Nicola Cornick‘s turn to step into the limelight.