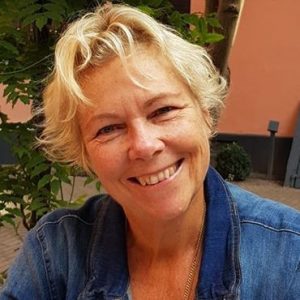 Who is Anna Belfrage?

I was always going to be a writer – well in between being an Arctic explorer, a crusader or Richard Lionheart’s favourite page (no double entendre intended – I was far too innocent at the time) Anyway, not for me the world of nine to five, of mortgages and salary checks. Oh no; I was going to be a free spirit, an impoverished but happy writer, slaving away in a garret room.

Life happened. (It does, doesn’t it?) I found myself the bemused holder of a degree in Business Admin, and a couple of years later I was juggling a challenging career, four kids, a husband (or was he juggling me?) a jungle of a garden, a dog, a house … Not much time for writing there, let me tell you. At most, I stole a moment here or there.

Fortunately, kids grow up. My stolen moments became hours, became days, weeks, months… (I still work. I no longer garden – one must prioritise) It is an obsession, this writing thing. It is a joy and a miracle, a constant itch and an inroad to new people, new places, new times.

The other day, I asked my husband to describe me in three words. Being a rather savvy guy, he sort of smiled and said I was beautiful, sexy and smart. Hmm. I asked one of my sons instead, and he said smart, funny and somewhat anal. Idiot; just because he leaves his stuff all over the place! Anyway, on I went in search of three defining adjectives. My daughter rolled her eyes, told me to get a life, but that if I insisted, she mostly agreed with her brother – especially the last one. My sister mulled it over and told me I was creative, warm and caring. I like her. My boss would probably (I haven’t asked him) say I am talkative, pushy and … err … smart. One of my former colleagues once said I was a bit like a steamroller, but, he hastened to add, with fluffy, pink rollers.

Actually, if I were to describe myself, I think I’d go for Trivial Renaissance – you know, a person with a wide spread in interests and skills, and with a smorgasbord of trivia knowledge from which to pick. I’d also say I have a lot in common with Curious George (but I don’t like bananas, nor do I climb all that much these days). I’m also a bit of a perfectionist – which is why I can sit for hours with a single sentence and move the commas around. (I know; rather weird)