Taa-daa! Time for guest number two in my 17th century fest. Today’s guest has a thing about Prince Rupert. I most definitely do NOT – but I’ve decided to forgive Christina for this, as I suspect it is mostly Rupert’s long locks that set her heart a-flutter. I met Christina in 2012. There I was, attending a writer’s conference in York and who do I stumble upon? A lady as fascinated by time-travel as I am, a writer as fascinated by the 17th century as I am and, to top it all off, she’s Swedish, like me. Well, okay: half-Swedish, but still. Add to this that we share a common addiction to chocolate, and you have all the foundations for a strong friendship. Christina admits to fuelling her writing endeavors with cocoa-based goodies, more specifically with Cadbury’s Bourneville. “I don’t drink much tea or coffee, so chocolate is the thing that gives me a boost whenever my energy is flagging. If I hit a tricky scene, I have a piece of Bourneville. If I’ve just finished a great scene, I get a square as a reward. “  says Christina. A lady after my own heart, she is even if I do not use a visual aid in the form of a photo look-alike of my male protagonist to inspire me.

But let’s get down to the nitty-gritty, shall we? Christina, please tell our readers why you are so fascinated by the 17th century.

Christina: Although it was only a part of the 17th century, ever since I first heard about the Cavaliers and the Roundheads, I’ve been fascinated by the English Civil War and that particular period of English History. I think the book that started my obsession was The Children of the New Forest by Frederick Marryat, which I read at an early age. It made a huge impression on me. And I am obviously very shallow as I’ve always preferred the Cavaliers with their beautiful long hair and flamboyant way of dressing to the staid and boring Roundheads. As I grew older and began to study the war in more detail, I was struck by how tragic and unnecessary it all was. Although a Royalist at heart, even I could see that if King Charles had not been so stubborn, if he’d listened to advisors who weren’t merely sycophants, and if he’d been willing to compromise a little, things could have turned out so differently. I did feel for him as he clearly didn’t lack courage, but he was misguided, there’s no doubt about that. Still, he didn’t deserve to be beheaded. 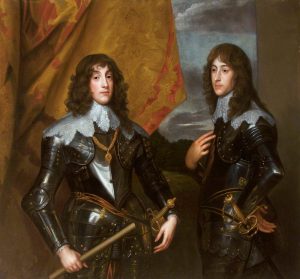 Christina: Prince Rupert of the Rhine fascinated me from the moment I first heard about him. (Anna: LOUD groan) He wasn’t just young and handsome, but a brilliant tactician on the battlefield and a great soldier – the epitome of a perfect Cavalier! I couldn’t help but be inspired by him. If the King had paid more attention to Rupert, he might have won. Further inspiration for my stories came from Anthony van Dyck, the King’s court painter. I am in awe of his immense talent and absolutely love his paintings of the important people of the day. The way he is able to render silk and other materials, as well as give life to the sitter, is out of this world.

Anna: Tell us a bit about your 17th Century books!
Christina: I have written four set during this century, but only two of them focus on the English Civil War and the UK – The Gilded Fan and The Velvet Cloak of Moonlight. (Anna: The other two are set in Japan, and boy are they a great read! Both of them. But maybe especially The Scarlet Kimono). The latter is a timeslip and the story in the past focuses on the last, tragic weeks of Raglan Castle as it was besieged and ultimately destroyed by the Parliamentarians. 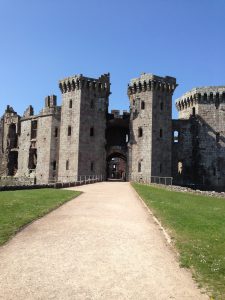 I live near the ruins of this once magnificent building, and every time I visited, I was so struck by the sad atmosphere I felt I had to tell its story. My hero and heroine are stuck inside for ten long weeks during the summer of 1646. Their hopes, and those of everyone else inside the castle, dwindle day by day, until they are forced to surrender. I tried to imagine how they must have felt, watching the New Model Army surround the castle walls, digging trenches, trampling the once beautiful gardens. How they tried to go about their daily lives inside while muskets and cannon bombarded them with noise and missiles, masonry crumbled, and their friends and comrades were injured or killed. They were fighting for their honour and beliefs, and whatever the right or wrong of the situation, they had no choice but to defend themselves.

In The Gilded Fan, however, I had to try and see things from completely the opposite point of view, as if I sided with the Parliamentarians, which was an interesting exercise considering my personal views on the subject. My heroine gets stuck in Plymouth, Devon, almost the entire war, and has to help defend the town against the Royalists. It helped that I focused on the suffering of ordinary people who probably hadn’t wanted to be forced to choose sides, rather than the political aspects. I think both parties in this conflict were too blinkered and pig-headed, and with a little more negotiation everything could have been resolved in a different way.

Anna: Are you planning on revisiting this time period?
Christina: I don’t have any immediate plans to do so, although I do have an old time travel manuscript I’d like to revise which is set around the events following the battle of Naseby. I also recently found an old-fashioned name – Arminell – which I’m dying to use for a Royalist heroine, so I think I’m going to have to come up with a story for her at some point! Right now I’m focusing on the Viking period though, so not a Cavalier or Roundhead in sight, but my love and fascination for that time will not diminish and I can’t write about Vikings forever.

Anna: For those of you who want to find out a bit more about Christina and her take on the 17th century, here are a couple of posts I think you’d enjoy:

Now, how about an excerpt? Christina has chosen to offer you a glimpse of The Velvet Cloak of Moonlight. 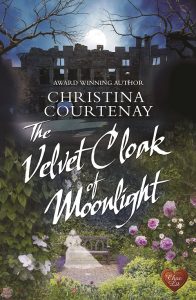 ‘Lovely day, is it not?’
The honey-smooth voice with its beautiful Welsh cadence made Arabella jump and her heart missed a beat. She looked up into the frank gaze of Rhys Cadell.
‘Yes, indeed.’ What else could she say? The sun was shining, summer almost upon them. The fact that she was enjoying this fine morning had absolutely nothing to do with the man standing beside her. Or so she told herself.
‘A shame the sun can’t dispel the storm clouds on the horizon though, wouldn’t you say? And I don’t mean that literally.’ He smiled.
‘No, we can but pray for deliverance.’ Arabella nodded towards the chapel behind them.
‘I don’t wish to alarm you, but I rather fear that God may not be able to help in this instance. Forgive me for asking, but is there nowhere else you could go, mistress? It would be wise to leave Raglan now while you still can.’
‘You think me a coward?’ Arabella drew herself up to her full height, which was only average, and glared at him.
His smile grew and he held up his hands as if warding off her anger. ‘Never! I was merely concerned for your safety. For that of all the ladies and children here, if I’m honest. This is not the place for any of you during the coming months. It will not be … pleasant, shall we say.’
‘I thank you for your concern, but we’ll manage.’ Arabella wasn’t sure whether to be pleased or offended. It was nice that he cared – if he really did and wasn’t just making small talk – but she had as much courage as the next person and if the marquis, to whom she owed so much, asked them to stay, then that was what she would do. ‘Besides, I don’t have anywhere else to go,’ she admitted.
‘I understand. Then we will see more of each other as I’m staying too.’
A strange kind of relief flooded her. He wasn’t leaving and perhaps he’d help protect them. It looked like he was big, strong and capable, a man to depend on. She felt safe next to him, she had to acknowledge, which was ridiculous really as she didn’t know him.
‘Oh, I am glad,’ she said, before she’d had a chance to stop the words. His immediate grin made her qualify this statement. ‘I mean, we need all the help we can get, obviously.’
He bowed to her. ‘Of course. I never thought for a moment you’d be happy about me staying for any other reason. Good day to you.’
It was clear he believed the complete opposite and Arabella felt her cheeks become suffused with colour. He sauntered off to speak to Lord Charles, who was standing near the fountain in the middle of the courtyard. She wanted to run after him and tell him he was wrong, but that would be a lie and she never lied.
Damnation.
And she never swore either. What was wrong with her? She was afraid she had a very shrewd idea of what ailed her and she didn’t like it. Not one bit. This was the worst possible time to develop any kind of feelings for a man, especially one she knew nothing about. And one who might be killed during the next few months.
But then, so might they all. 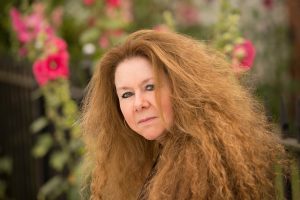 Christina Courtenay writes historical romance, time slip and time travel stories, and lives in Herefordshire (near the Welsh border) in the UK. Although born in England, she has a Swedish mother and was brought up in Sweden – hence her abiding interest in the Vikings. Christina is a former chairman of the UK’s Romantic Novelists’ Association and has won several awards, including the RoNA for Best Historical Romantic Novel twice with Highland Storms (2012) and The Gilded Fan (2014). The Velvet Cloak of Moonlight, a timeslip novel set partly during the English Civil War, was published by Choc Lit in October 2016. Echoes of the Runes (Viking time slip published by Headline in March 2020) is her latest novel. Christina is a keen amateur genealogist and loves history and archaeology (the armchair variety).

Did you miss the previous post in the series? Go here! Keep an eye out for our next post featuring Katherine Pym.