Today I am welcoming my fourth 17th century guest – no, no, no: enthusiast – to my blog. I bet many of you have already heard of Nicola Cornick and hopefully you’ve read a book or two by her as well. Her latest release is set in Tudor times, but she has the great taste of having a special fondness for our preferred century which is why she has joined us here today.

The first time I met Nicola in person was at my first ever RNA conference where she welcomed me (and everyone else) to an event that was not only very stimulating but also extremely welcoming. I have since had the pleasure of chatting with her on several occasions, and the impression she leaves behind is one of mellow warmth.

Nicola has shared with me that for a number of years she lived in a cottage haunted by a Royalist ghost. I am assuming it was a polite and non-aggressive ghost, but kudos to Nicola for hanging in there! Maybe it is this ghostly Cavalier who steered Nicola in the direction of the 17th century–let’s ask her, shall we?

Anna: So, Nicola, why the 17th century? Was it because of the ghost?

Nicola: Not really. It’s more about the intrigue and the politics, the loyalties and the betrayals, the art and the culture, the courage and the sacrifice, the hats and the boots!

Nicola: William, first Earl of Craven. I came across him over 20 years ago when I first started working at Ashdown House, the hunting lodge he built in Oxfordshire in the 1660s. It fascinated me that here was a man who had been eminent in his own day for lots of reasons – he was a soldier, a philanthropist and a spy amongst other things, yet history has forgotten him almost completely.

Nicola: I’ve written two seventeenth century set books. Lord Greville’s Captive is a classic historical romance set during the English Civil Wars that looks at the price exacted by the conflict on personal relationships and family loyalties.
House of Shadows is my dual time novel set in the 17th century and the present. This is focussed on Ashdown House, and the secret marriage between William Craven and Elizabeth Stuart, the Winter Queen, sister of King Charles I. It’s set in England and Holland during the Thirty Years War, which was a particularly rich and interesting period to research. Elizabeth was a fascinating woman, and her court in the Hague was a centre for culture as well as political intrigue.

Nicola: Absolutely! I’m currently writing a short story about Prince Rupert’s ride from Oxford to Newark in 1645 to demand a court martial on the charge of treason.
Anna: Well, I guess I shouldn’t be surprised dear Rupert pops up as a bad penny in every other post. In this case, though, I find your project extremely intriguing, seeing as Rupert fought his way across the country to demand the king court martial him. A dramatic gesture, one could say, very much in keeping with the flamboyant Palatinate Pest as one of my other guests usually refers to Rupert.

Nicola: As well as the short story mentioned before, I’m also writing another dual-time story set in a different historical period ravaged by war – the 15th century. (Anna: Ooooo – sounds like War of the Roses stuff!)

Anna: Given your passion for this era, I imagine you’ve written quite a few posts about this period. Please share your top three favourite posts with links:

Nicola: There is a portrait of Prince Rupert of the Rhine at Ashdown House and it also features one of his pet dogs. I wrote about Rupert and his love of animals for one of my very first Word Wenches posts, and particularly Boye, the famous standard poodle that used to run beside his horse. https://wordwenches.typepad.com/word_wenches/2009/07/one-man-and-his-dog.html

The Craven family were a remarkable example of the way in which the late Tudor and early Stuart period enable the rags to riches rise to prominence of “new men.”  Here I talk about the founding of the Craven dynasty.

Anna: the Craven story is so fascinating! And Hoydens and Firebrands is a great blog for those in love with the 17th century.

Nicola has chosen to give us an excerpt from House of Shadows: 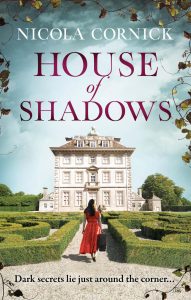 The heat was overpowering and the air laden with smoke and the sweet-woody scent of frankincense. The sun, moon and stars on the knights’ robes seemed to spin before her eyes. Her head ached sharply. Caught off guard, Elizabeth took a step back. She put out a hand to steady herself against one of the stone pillars but it met thin air.

Someone caught her from behind, his hand over her mouth, one arm about her waist, pulling her out of the room, swinging the door shut behind them. It was sudden and shocking; no one touched the Queen, least of all manhandled her. Instinct took over, instincts she did not know she possessed. She bit down hard, tasting the tang of leather against her tongue and he released her at once, though the bite could not have hurt and nor could her feeble attempts to lash out with boots or elbows.

“You fool.” She spun around to face him. She was shaken, ruffled, more than she ought to have been. “Don’t you know who I am?”

She saw his eyes widen, hazel eyes, eyes that held more than a hint of laughter. In the flaring torchlight she could see he was not tall, of no more than average height, which still made him several inches taller than she. His hair was a rich chestnut, curling over the white lace of his collar, his nose straight, a cleft in his chin. And even in this moment of stupefaction, even as he recognised her, there was still amusement in his face rather than the deference he should be showing her.

“Your majesty.” He bowed.

She waited, haughty. His lips twitched.

“Forgive me,” he said smoothly, after a moment. Nothing more, and it did not sound like a request, still less like an apology.

He was young, this man, a good deal younger than she was, possibly no more than two or three and twenty. Elizabeth thought she recognised him though she did not know his name. She could see he was a soldier not a courtier. Unlike the Knights of the Rosy Cross he was clad plainly in shirt, breeches, cloak and boots. There was a sword at his side and a knife stuck pirate-wise in his belt.

Heat and sudden tiredness hit her again, making her sway. Perhaps her ladies had been right, damn them. She was six months pregnant and should have been resting.

The expression in his eyes changed from amusement to concern. He took her hand, drawing her forward.

“Come into the guardroom-”

“There is no one here but me.”

She allowed him to usher her through the door into the small chamber. It was Spartan, with a bare floor and one candle on a battered table. A meagre fire glowed sulky in the grate. It was no place for a Queen but there was a chair, hard and wooden, and Elizabeth sank down onto it gratefully.

“You are guarding the ceremony alone?” She asked.

She smiled at that. “You could not have anticipated this.”

“That the Queen herself would choose to watch?” He shrugged, half-turning aside to pour her a beaker of water from the carafe on the table. “I suppose not.”

“I am a member of the Fellowship of the Rosy Cross,” Elizabeth said. “I have every right to be here.”

His hand checked. He turned back, dark brows raised. “Then why not exercise that right openly? Why creep in like a thief?”

Few things surprised Elizabeth these days. Few people challenged her. It was one of the privileges of royal blood, to be unquestioned. Never explain never complain was an adage that her mother, fair, frivolous Anne of Denmark, had taught her. This man evidently thought that a commoner might question a queen. That was unusual.

All the same she chose to ignore his question, tasting the water he passed her instead, which was warm and brackish but not unpleasant.

He bowed again. “William Craven. Entirely at your service.”

Anna: And so, they met… Very nice excerpt IMO. 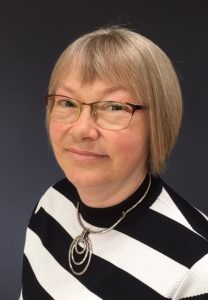 Nicola Cornick grew up in Yorkshire and studied History at the University of London and at Ruskin College Oxford. She worked in academia for a number of years before becoming a full-time writer. She is the author of acclaimed dual-time mysteries as well as of award-winning historical romance.

When she isn’t writing, Nicola volunteers as a guide and researcher for the National Trust at the 17th century hunting lodge Ashdown House. She has given talks and chaired panels for a number of festivals and conferences including the London Book Fair, the Historical Novel Society and the Sharjah Festival of Literature.  Nicola also gives talks on public and local history topics to WIs, history societies and other interested groups.

She is a former Chair of the Romantic Novelists Association and is the current RNA archivist, and a trustee of the Friends of Lydiard Park. In her spare time Nicola is a puppy walker for the Guide Dogs charity.

Did you miss the previous post in the Glory and Gore series by Katherine Pym? Check it out! Next time we meet up will be two weeks from now when Elizabeth StJohn will be dropping by.