Right: I’m going to come straight out and admit it. I am an overachiever. Always have been, always will be, which is why I have not contented myself with organising one multiple contributor event on my blog this autumn – I am going for two. The only other person I know off who does something as…err…ambitious? Borderline crazy? is Helen Hollick, but then Helen and I have a lot in common, bar her love of hats. I never wear hats. They make me look like a pug. Not so Helen’s hats on Helen—they add a certain je ne sais quoi.

One thing we deffo have in common is our love for the medieval period, and just like that I have created a segue into what this post is really about – the Middle Ages. Well, if we’re going to be correct, it’s about my second collaborative effort on my blog, namely a sequence of posts from various authors named Much Medieval Mayhem. Over the coming weeks you’ll meet (in no particular order) Nicky Moxey, Helen Hollick, Alison Morton, Annie Whitehead, Char Newcomb, EM Powell, Paula Lofting, Mercedes Rochelle, Mary Anne Yarde and Sharon Bennett Connolly, 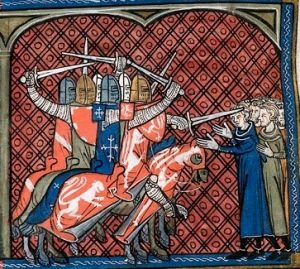 The medieval period is a very, very long period. When I went to school, it was often called The Dark Ages, with the Roman Empire blinking out as a beacon of light just as the period kicks off and the Renaissance lighting a torch to guide humanity out of the darkness at the other end. Ha! The medieval period was no darker than any other period in human history. It has its fair share of drama and tragedy but also of beauty and art, of literature and learning. It is the age of cathedrals, buildings rooted firmly to the ground while striving heavenward. It is the period of Books of Hours and Psalters’, beautiful illustrated manuscripts that drip with colour on every page. It is a period of migration, of collapsing civilisations and their new, vibrant replacements. It is the period of knights and damsels, of hermits and anchorites. It is a period that here in Europe is firmly dominated by the belief in God, in His son, in the Holy Virgin and all those saints. Many, many saints, and to judge from the number of relics left behind by these holy people, they were endowed with far more limbs, fingers and heads than your normal person—which just goes to show that the Middle Ages had their fair share of con men. All eras do. 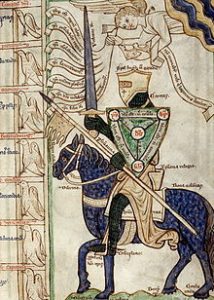 I was first fascinated by the medieval period when I began reading Henry Treece. I inhaled my way through his Viking trilogy, and then I ended up reading his book about the Children’s Crusade, and that’s where I got stuck. Not in Mr Treece’s book, but in the period of Crusades. I read about the Kingdom of Jerusalem, I lay hidden under my bedclothes at night with a flashlight and read about Saladin. From Saladin, I hop-scotched over to Richard Lionheart and now it wasn’t only Crusades, it was the Plantagenet family, and in another step backwards I was suddenly reading everything I could about 1066 and Harold. Sigh. Big, big sigh. I lost my very young heart to Harold, brave man that he was. But he died and I cried. I lost my heart again to Richard. He died and I cried. At this point, I began to realise that all of these peeps I was reading about were well and truly dead. This is when I started drawing pentagrams in my wardrobe and lighting candle stubs while attempting to chant myself backwards in time. Did not work. Instead, my frantic mother wrenched the door to my wardrobe open and wondered where in God’s name I had left my brain, seeing as I was playing with fire in an enclosed space full of clothes. She had a point. I stopped the chanting and stuck to reading. 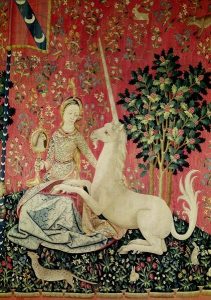 Now, many years later, I still find the medieval period a veritable treasure trove of historical events and people. We have Castilian kings (and queens—quite a few badass ladies on the Iberian Peninsula, let me tell you) fighting Muslims. We have French kings going on crusade to Aragon. We have abducted nuns, we have usurped thrones, we have massacres and sweeping pandemics. Like a brightly woven tapestry, the medieval period offers a vibrant historical setting—no wonder so many readers and writers gravitate to this period, losing themselves in damsels and knights, monks, pilgrims, beggars and kings. Over the coming months, my guests will offer you an insight into what they love the most about the medieval period. I hope you’ll enjoy the ride!

Those of you who follow my blog will know I have many, many, many, many posts about the medieval period. Quite a few feature impressive women and some of my favourite posts are the following:

Wicked Mabel. Not a nice lady, but very…erm…colourful

Maud – the birthday girl that got a very unusual gift

Rachel the temptress – of a forbidden love story

Eleanor of Castile – fortunate in love, not so much in childbearing

But the medieval ages wasn’t only about the ladies, was it?

How a tunnel led to Mortimer’s fall

Of painful and extended death

The earl who abandoned his wife for his love of another

This last of the posts above—the one about Madog—is presently very much on my mind as it is dear Madog who has caused me to extend my latest book, His Castilian Hawk, into a series. Where the first book is set against Edward I’s conquest of Wales in 1283, the third in the series will be set around Madog’s rebellion—or so my muse tells me, in between kicking me not so gently and ordering me to get on with finishing book nr 2, His Castilian Pomegranate.

I thought I’d finish this post with an excerpt from my latest book, His Castilian Hawk. If you’ve not made Robert’s acquaintance yet, here he is, bloody and sweaty in the midst of battle.

The cavalry began to move. In tight formation, it approached the bridge. The Welsh laughed, yelling insults, but on the slope the javelin men began to stand and assemble in loose formation. Robert’s pulse picked up. Despite the cold, he could feel sweat running down his back, his breathing shallowing. He adjusted his coif, clapped his helmet into place and tightened the strap under his chin. He slipped on his gauntlet and gripped his sword, raising it above his head.
“Now!” He brought the sword down, and the archers released their first volley. Chaos. Men fell like scythed corn, the survivors scrambling away while trying to determine where the arrows had come from. “Again!” Robert yelled, and arrows darkened the skies again. More dead, more screams, and down by the bridge, the cavalry charged.
“Poor devils,” John remarked as the remaining defenders were crushed beneath the horses.
“Aye.” Robert said. For a man destined for holy orders before the death of his older brother made him the Mortimer heir, Edmund Mortimer had a good head for battle strategy. He nodded at the Welsh streaming their way. “Ready?”

He had no notion how long they fought. Time lost shape in a battle, became nothing but a sequence of thrusts and parries, swings and blows. Mud, blood and gore underfoot, the stench of vacated bowels and fear tingeing the air, sweat running down his face, down his back. His arm rose and fell. Side by side with John, he ploughed through the attacking Welsh, leaving a wake of carnage behind.

The cavalry swept through the shiltrons, men screamed and begged, a young lad curled together on the ground and cried for his mother. Soon the Welsh coming their way weren’t attacking, they were fleeing. Not that it made a difference—they died anyway.
The short winter day was shifting to dusk before the fighting was over.
“Fuck!” Robert collapsed where he stood. His arms, his chest, his back throbbed, and he had trouble walking after that javelin caught him mid-thigh. He looked up at John. “Are you unscathed?”
“Nothing serious,” John replied.
“And the others?” Robert wearily got to his feet. “Harry!” he yelled. “Tom, Simon!” One by one, his men limped towards him. Injured and tired but alive—all of them.

From the other side of the battlefield came the sound of cheering.
“Seems we won,” John said with a grin.
The cheering came closer. Men on horses galloped towards them with something held aloft on a spear.
“Christ and all his saints,” Robert said. “Is that what I think it is?”
The lead rider held in his mount brutally, forcing the horse back on his haunches. “Behold my dear cousin,” the rider said, shoving back his visor to reveal a bloodied face. Roger Mortimer waved at the head adorning the spear. “He’s dead, Robert. Very, very dead.”
Robert would have to take his word for it. He’d only seen Prince Llywelyn once, back in 1277 when he met with King Edward in Worcester, and this brutally hewn-off head, with tendons still trailing from the neck, bore little resemblance to any living person. He looked away and said a hasty prayer for the prince’s soul. He’d been pushed into this rebellion by his treacherous brother, had likely not wanted to go to war again, not with a wife to mourn and a newborn babe to care for.
“Is it all over, then?” he asked Mortimer.
“Over?” Mortimer shook his head. “Not until his brother’s head adorns a pike of its own.” He grinned. “God grant me I get to do the same to him.”
“The Mortimers make a habit of collecting heads, don’t they?” John muttered under his breath as Roger Mortimer sped away with his grisly trophy.
“They’re good at it,” Robert said with a shrug. He didn’t particularly want to remember that scene at Evesham when his then lord, old Baron Mortimer, stabbed the weakened de Montfort through his throat before decapitating him. He’d done more than that, but Robert had been spared the sight of seeing Mortimer castrate de Montfort by a massive blow to his side as one of de Montfort’s men desperately tried to reach his lord. He crossed himself, thanking God for sparing him then, a twelve-year-old fool who’d insisted on accompanying his lord into battle so as to cover himself in glory, and for sparing him today.

Well: that’s it for today, peeps. Be sure to pop by on Tuesday next week to meet my first guest in the Much Medieval Mayhem extravaganza!

6 thoughts on “Much Medieval Mayhem – here we come”