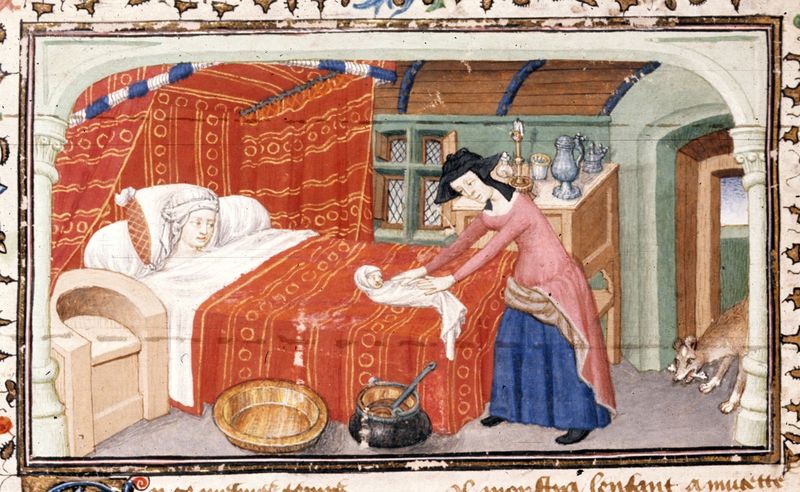 One of the things a medieval queen was expected to provide her husband with was a male heir – and preferably a spare. For a medieval king to have only female heirs caused a number of problems, primarily that of convincing the male barons to swear allegiance to a woman. Plus, from a purely dynastic perspective, whatever children the female ruler had would belong to their father’s house.
So when, in 1254, the heir to the English throne, Edward, married Eleanor of Castile, one of the expectations on the (very) young bride was that she ensure a continuation of the Plantagenet dynasty – a dynasty she herself belonged to through her great-grandmother and namesake, Eleanor of England. (Yet another young bride, this daughter of Henry II and Eleanor of Aquitaine married Alfonso VIII in 1174)
I’d have liked to present you with some wedding pics, but seeing as all this happened close to 800 years ago, there aren’t any. In fact, there aren’t any reliable likenesses of Edward and Eleanor. We know he was uncommonly tall. We know he lisped and had a droopy eye-lid. We know nada about her, but I imagine her as small – especially standing side by side with her lanky groom.
“Who is that?” Eleanor whispered, shrinking back behind a pillar.
“That?” Her maid peeked out. “Ah, that is your intended, my lady.”
“Him?” Eleanor pressed her cheek against the cold stone. So tall, so handsome – what would he see in her?
As always when it came to royalty, the Eleanor-Edward union was political. Edward’s father, Henry III, needed to sort an ongoing feud with Eleanor’s brother, Alfonso X, and stop him from invading Gascony. And so, the fifteen-year-old Edward was sent off to Burgos, there to do his duty and wed the  Castilian princess. At least they met some days before tying the knot. Two tongue-tied teenagers peeking at each other on the sly, cheeks that heated when their eyes met. A shared smile, and then Edward was off to do other things (like being knighted by his future brother-in-law Alfonso) and Eleanor could go back to embroidering an elegant E on the shirt she was making for her soon-to-be husband.
The little bride, Eleanor, came with a good pedigree. Her mother, Jeanne de Dammartin, had once been considered by Henry III as a wife for himself, but due to political reasons this was not to be. Instead, Jeanne was wed to Fernando III of Castile (the future St Fernando) as his second wife.
The thirteen-year-old Eleanor not only had a saint for a father. She also came from a notably fertile family. Her mother had given Fernando five children, four of whom were sons. Her paternal grandmother, Berenguela, had produced five children during seven years of marriage. And as to her great-grandmother Eleanor of England, well she had presented her husband with twelve children – one every other year or so. However, very few of the sons survived – in fact, once the youngest was killed by a falling tile, the Castilian crown passed through Berenguela to Fernando. (More on Berenguela here)
With all these fertile females up her family tree, no one was particularly worried about the mandatory male heir. In the fullness of time, Edward’s new wife would surely present him with a healthy, squalling son. 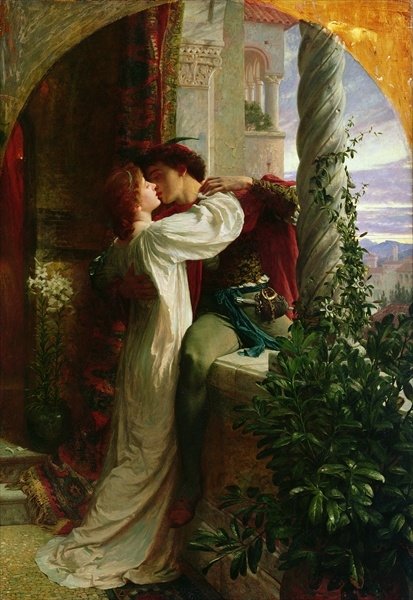 As an added bonus, the young couple seem to have taken an immediate liking to one another. This resulted in a stillborn (or dead shortly after its birth) baby in 1255, the first of sixteen (or at least fourteen) children. At the time, Eleanor was not yet fourteen, so I imagine this was a traumatic experience. There was a gap of some years – years in which the affection and love between Edward and Eleanor grew, making them almost inseparable. Whether or not there were miscarriages, we don’t know, but in 1261 Edward and Eleanor welcomed a daughter, Katherine, into this world.
Little Katherine died at three, and one year later, in 1265, Eleanor was delivered of yet another daughter, Joanna, who died some months later. I imagine that by now, Eleanor and Edward were beginning to become quite concerned. More than ten years married, and no living children – that did not bode well.
In 1266, little John arrived, and he was miraculously healthy. Prayers of gratitude rang in the royal solar, even more so when in 1268 yet another son, Henry, saw the light of the day. Two boys, albeit that little Henry was sickly. To round things off, a healthy daughter, Eleanor, was born in 1269.

In 1270, Edward took the cross. As a matter of course, Eleanor decided to accompany him, leaving her babies in the care of their grandmother and, in the case of the precious heir, their great-uncle. For a modern person, this seems somewhat callous: what sort of mother leaves her children to gallop off on adventure with her husband, hey? Well, first of all it is important to remember that royal children were quite often brought up in a separate household so as to give them some sort of stability. Being a medieval king – or royal heir – meant being constantly on the move, the entire court ambulating back and forth across the country.
Also, in the case of Edward and Eleanor, I do believe her first love was always her husband – he and his needs came first. And Edward seems to have been as genuinely in love with his wife, so maybe it was a symbiotic thing: he couldn’t go anywhere without her. Or maybe that is me being ridiculously romantic, seeing as we’re talking about a man with a very ruthless streak, as demonstrated by how he crushed the Welsh and attempted to subjugate the Scots. On the other hand, all men have multiple sides to them, and…Stop, stop, stop! Back to today’s topic – the quest for a male heir.
In 1271, there was a stillborn child. In 1272, while in Palestine, Edward and Eleanor welcomed yet another daughter, Joan. By then, they would have heard that their son John had died and what little joy they experienced at the birth of their daughter soured into fear when Edward was almost murdered. Clearly, they weren’t welcome in the Holy Land, and they set off for home. On the way, they learnt Henry III was dead. Edward was now king, and the pressing matter of a male heir became even more pressing – little Henry was not expected to live long.

In 1273, son number three, Alphonso, was born. A fine, lusty son, and Eleanor must have wept in relief. The little boy even survived his first few months, and it was therefore with great happiness Edward and Eleanor celebrated their coronation in 1274. By then, they’d been married almost twenty years, and even if little Henry died some months later, they did have their lovely Alphonso – and two healthy little girls. Does not seem much, given that Eleanor had given birth nine times. Nine. As she was only thirty-three, she could look forward to several more pregnancies. I wonder if there were times when this thought filled her with trepidation.
1275, 1276, 1277, 1279 – four pregnancies, four births, resulting in four little girls of whom two died. But at least Alphonso, this apple of his parents’ eyes, still thrived.
1281 – a little boy came and went like a shadow in the night. But still, they had Alphonso.
1282 – Elizabeth of Rhuddlan was born. A healthy child, and now there were five daughters – plus the precious Alphonso.
In April of 1284, a heavily pregnant Eleanor accompanied her husband to Wales.
“Maybe you should stay at home,” he might have said to her, patting her on her swelling stomach. Not that he meant it, not really.
“Stay at home? I accompanied you to the Holy Land – what is a jaunt to Wales compared with that?” she puffed, giving him a bright smile. 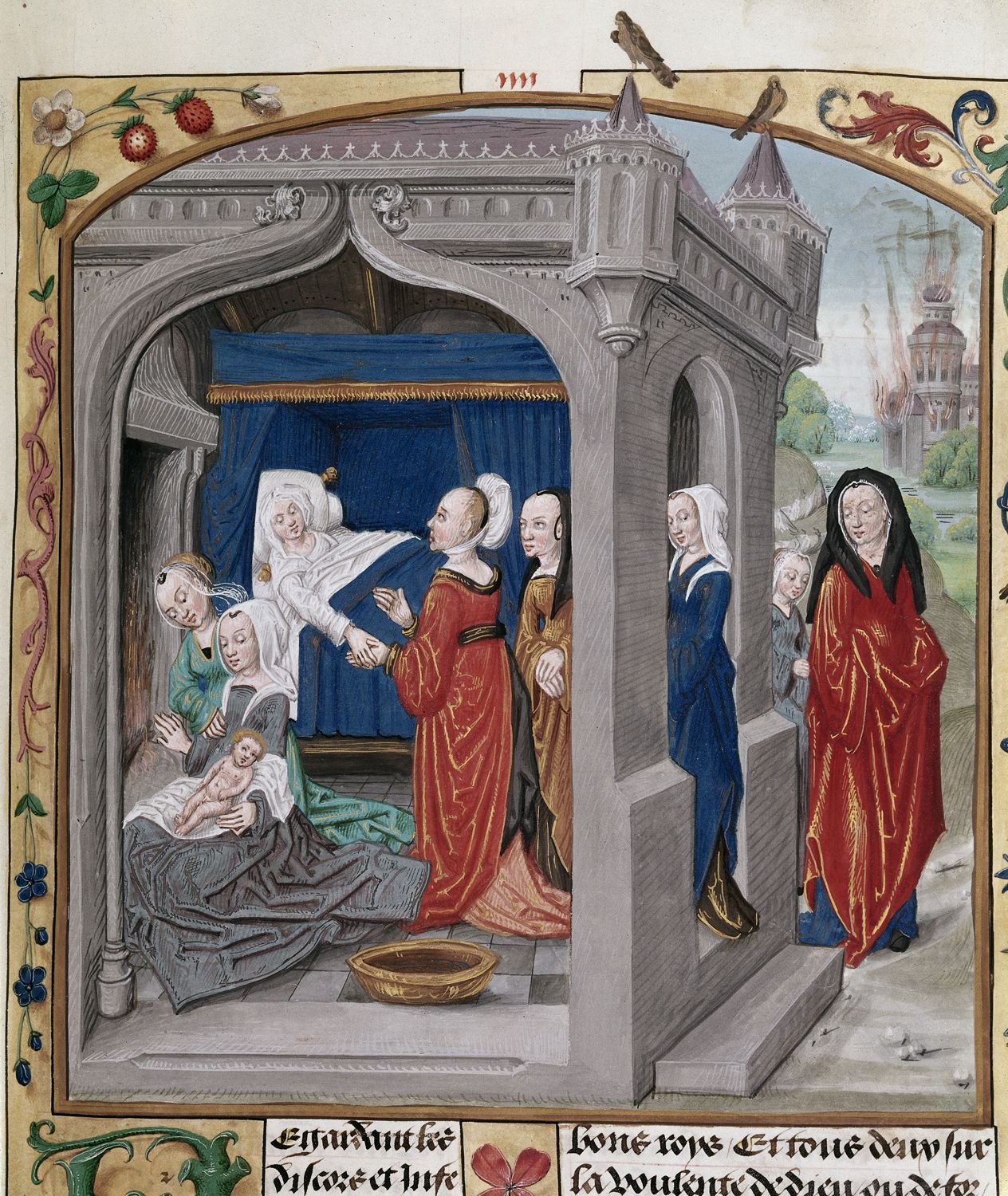 So off they went, and there, in the building site that was Caernarvon Castle, Eleanor was delivered of a boy. A boy! Yes, a miracle baby, a strong little prince, and Eleanor smiled and wept as she presented her husband with the much-desired, if not so necessary, spare. After all, their sweet son Alphonso was now old enough to wed, and a marriage had been arranged for him with Margaret, daughter of the Count of Holland. For a little while there, everything was perfect in the Eleanor-Edward household. Until Alphonso fell ill, dying in August of 1284.
Alphonso lived the longest of all those children who died. Long enough for his parents to pin hopes on him, long enough to grow from an anonymous baby into an adored boy. And then, just like that, he died. It must have been utterly devastating. Yes, they had Prince Edward, but both Eleanor and Edward knew just what frail things children were – after all, with Alphonso they buried a tenth child. Even by the standards of the time, they were singularly unlucky as parents.
Eleanor was not to have any more children. After sixteen births, I guess she was worn out, and besides, her health was failing. So all hopes for a surviving male heir now rested on Edward, and even if he was a robust child, there were concerns that he too would die young.Just like with all her other children, on a daily basis, Eleanor did not see much of her youngest son. But despite not being with her son and daughters 24/7, Eleanor was a conscientious mother, ensuring her children were in good, competent hands. Did she love her children? I’d say yes – as much as she dared to. But no matter that she loved them, she loved her husband much more. It was with him she wanted to be, it was at his side she belonged.
In 1290, Eleanor died. Edward was numb with grief – so much so that for three whole days all royal business was suspended. But life goes on, and Edward had a duty to the crown – and his dynasty – to ensure there was more than one little boy in line to the throne. So in 1299, Edward married a second wife, the pretty and vivacious sister of the king of France. At the time, he was sixty and she was twenty – and fertile enough to present him with two beautiful and healthy sons.
In the event, these little spares would not be needed. In 1307, Eleanor’s last-born, Edward of Caernarvon, became king after his father. I daresay she would have been mightily pleased. She had done her duty by her husband and his family – she had birthed the next king.

12 thoughts on “Brought to bed of a daughter? Try again!”