In Spanish, today’s protagonist is Estefanía la Desdichada, Stephanie the Unfortunate. If we’re going to be quite correct her name is Estefanía Alfonso and she was the illegitimate daughter of Alfonso VII of Castilla and León and his paramour, Urraca. (And no, this Urraca was not his mother, whom I wrote about here, she was just another lady of good birth burdened with an odd name)

Little Estefanía is mainly remembered because of her death. Always somewhat sad, IMO. I am assuming she had an okay childhood – her royal father seems to have been fond of his mistress and readily recognised his daughter, which if nothing else guaranteed a life of some comfort. We know nothing about her early years, but reasonably she was raised to be a good, pious lady – her father was a very pious king, despite his extra-marital relationships. 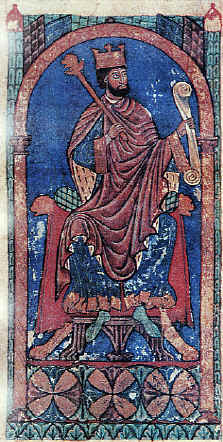 At the time, Alfonso VII was the most powerful of the Christian kings in Spain. Since the death of his step-father, Alfonso I of Aragón, there was no one to threaten our Alfonso’s position. The kingdom of Castilla and León thrived, the relationship with the Moors was, as always, fraught but not unbearably so. Alfonso VII could concentrate on giving his court the trappings of grandeur his title, Emperor of Spain, required. His co-kings did homage to him, and all in all, Alfonso was quite content: after the tumultuous years during his mother’s reign, he was now recognised as the supreme Christian power on the Iberian Peninsula.

All of this was neither here nor there for little Estefanía. Instead, she learnt to embroider and spin, to converse and sing. In 1157, when Estefanía was about seventeen, her father died, and instead her half-brothers, Fernando and Sancho took over, one as king of León, the other as king of Castilla. At the time, Estefanía was as yet unmarried. Yes, she was the daughter of a king, but she was the illegitimate daughter, which made her hand less sought after, especially as she didn’t come laden with dowry – Alfonso had many children to look out for.

Anyway, at the battle of Lobgregal in 1160,  the House of Lara hit the dust. Riding with the count of Lara was a man named Osorio Martínez. In the fighting he was killed, by none other than his own son-in-law Fernando Rodriguez de Castro. In the aftermath of the battle, Fernando repudiated his wife (he couldn’t very well have the daughter of a rebel as his wife, could he? Or maybe she couldn’t stand the sight of him, what with him having killed her father). Instead, he was given the hand of Estefanía Alfonso in marriage.

What Estefanía thought of all this is unknown. But Fernando was not a bad catch, and although older than her, he was still in his prime. Plus, of course, they were related, so it wasn’t as if she was marrying a stranger.

Estefanía’s brother, Fernando of León, had probably hoped that Fernando Rodriguez would hand over his little nephew Alfonso VIII on a silver platter. And maybe he would have, but the young king was whisked away by the surviving members of the House of Lara. Some years later, the Lara family was cornered, with Fernando Rodriguez having conquered a number of castilian cities, and they saw no option but to turn over the boy-king, now about eight, into the tender care of his uncle. Didn’t happen, as an unknown gent smuggled the boy out of the castle where he was held. Alfonso VIII would go on to claim his lands, marry Eleanor of England (daughter to Henry II and Eleanor of Aquitaine), have many babies, and in general lead his own exciting life, among which sticks out the victory over the Moors at the famous battle of Las Navas de Tolosa.

None of this had much effect on Estefanía. She presented her husband with at least one son and a daughter, and I’d assume her life would have included a lot of waiting about for her husband who was ususally off on some royal assignment or another.

By 1180, Estefanía and Fernando had been married for twenty years. She was around forty, he in his mid-fifties. Were they content with each other? Maybe, maybe not. But when Fernando was informed that his wife had been seen sneaking off to secret assignations with a man, he had no problems believing what he was told, which indicates it wasn’t all sunsets and roses in the Fernando/Estefanía marriage. Or maybe he was feeling the weight of his years, worried that his wife was not getting what she needed at home.

Whatever the case, Fernando had her followed. On repeated occasions, she was seen hastening off, returning some hours later. At long last, Fernando couldn’t stand this any longer. His honour was being dragged through the gutters by his adulterous wife, and he was not having it! Nope. No more. So one night, when the veiled and cloaked lady of the house yet again disappeared down an alley, it was Fernando who followed, dagger in hand.

He waited in the shadows, gritting his teeth at the sounds of love-making that escaped the closed shutters. And once she was gone, as veiled and cloaked as when she’d arrived, Fernando entered the room and swiftly killed the lover – a man so young he qualified as a toy-boy, except that the term wasn’t invented yet.

Fernando rushed home, burst into the bedroom and found his wife in bed, sleeping. He attacked her, stabbing her repeatedly until she died in a spreading pool of her own blood. Which was when Fernando stopped to think. How could she be fast asleep in her bed when she had at most returned home some minutes before him? And where were the clothes she’d been wearing? He couldn’t find them anywhere. So he turned the room up and down, and this is when an icy weight started to collect in his guts, even more so when under the bed he found one of his wife’s maids, dressed in her mistress’ cloak and veil.

Turns out the maid had been using Estefanía’s clothes for months so as to hide her identity when she sneaked off to see her lover. After all, having sex outside of marriage was a sin, and the maid didn’t want to risk being fired for her low morals. Instead, her subterfuge had led to two people being murdered by a man who was by now a sickly white, staring down in shock at his bloodied hands. Fernando had killed his loyal wife, the sister of his king, and all because his pride had made it impossible for him to confront Estefanía and ask her if she was cheating on him…

Fernando draped a heavy noose round his neck and went directly to the king where he confessed his crime. The king chose to pardon him, moved no doubt by the genuine grief displayed by Fernando. Estefanía was buried side by side with her paternal grandmother, Queen Urraca, a simple inscription making no mention of how she died, only who she was, who was her father, who she was married to and who she gave birth to. And as to the maid, she was burned alive at Fernando’s orders.

Some centuries later, Lope de Vega (Spain’s equivalent to Shakespeare – well, together with Calderón de la Barca) would write a play based on Estefanía’s fate, La Desdichada Estefanía. Other than that, she remains a footnote in history, a woman who never quite steps out of the shadows – except for her gory death. And even that, dear people, we may have to take with a pinch of salt, as not all sources relate the same story. All we really know is that she died on July 1, 1180 and was survived by her husband and son.

Finally, in the below Fernando Rodriguez “borrows” the words of  Ramon de Campoamor, 19th century Spanish poet:
Mi esposa Estefanía, que está en gloria,
fue del Séptimo Alfonso hija querida;
desde hoy sabréis, al escuchar su historia,
que hay desgracias sin fin en nuestra vida.
Yo la maté celoso; y si, remiso,
no me maté también la noche aquella,
fue por matar después, si era preciso,
a todo el que, cual yo, dudase de ella.
My wife Estefanía, who is in glory,
was of Alfonso VII a dear daughter;
As of today you will know, upon listening to this story,
that there are sorrows without end in our life.
Jealous, I killed her; and if, remiss,
I did not kill myself also that night,
it was to kill later, if it was necessary,
all who, like me, doubted her

12 thoughts on “The unfortunate Stephanie”