Remember how I told you a week or so ago that I would be hosting a blog featuring writers who have a passionate relationship with the 17th century? Well, dear peeps, today I am very happy to introduce my first guest, Andrea Zuvich. I almost called her “my first 17th century guest” but that would either indicate Andrea was no longer around or was extremely long-lived – or a vampire (which, given that she has written a book featuring a 17th C person who becomes a vampire would be most à propos) But no: Andrea is very much a here and now person who wears “love pants” when she writes. “Love pants?” you ask. Yup. soft things with hearts and Minnie Mouse all over them – something no proper 17thC lady would be seen dead in.

Andrea’s passion for this time period is evident in everything she does. She has taught me to love Henry Purcell’s music, has almost made me forgive Mary II for her betrayal of her father, and introduced me to the rather splendid movie Farinelli about a castrate singer.

But less of me and more of Andrea, right? So, let us dive straight into our “meet and greet” with her. Andrea, over to you – and let’s start with why you’re so fascinated with the 17th century.

Andrea: The seventeenth century has it all! Whilst in many respects it was quite a brutal and harsh time in which to live, there were so many beautiful parts about it. The architecture, the music, the art, the fashions—oh! *swoons* They are simply glorious! (Anna here: I am somewhat hmm about the fashions – too much ruffle and lace on the men, IMO)

Anna: Is there a particular event or person that/who inspired your writing?
Andrea: I developed a reputation in high school for being that girl who was obsessed with William Shakespeare and Jacobean England, so I’d say Shakey-boo initially, and then I became interested in Mary II out of annoyance (I was working at a palace and many, if not most of the visitors thought Mary II was Mary Queen of Scots or Mary Boleyn. Most people gravitated towards the Tudors because that’s the period which has been the focus of many books and films. I wanted to address this and that started my blog writing, then books).
Anna: Tell us a bit about your 17th-century books!
Andrea: My first book, His Last Mistress (2013), was a novella about the Duke of Monmouth and Lady Henrietta Wentworth which I wrote in my mid-twenties. I then wrote a historical horror, The Stuart Vampire (2014). I then started writing nonfiction history starting with The Stuarts in 100 Facts (2015) and A Year in the Life of Stuart Britain (2016). My latest book, Sex and Sexuality in Stuart Britain, came out in June (2020).
Anna: probably a stupid question, but are you planning on revisiting this time period?
Andrea: Oh yes! Thing is, I’m so enamoured with this time period, that I find I really don’t want to do another historical period.
Anna: What are you working on right now?
Andrea: I am currently researching the life of Barbara Palmer, the notorious mistress of King Charles II. What a minx! After that, I’m contracted to write about Queen Mary II. So… I’ll be working on biographies for the foreseeable future, although I am quite desperate to write fiction again(!)
Anna: I can imagine. But you are so GOOD at the non-fiction writing! Other than your books you maintain an excellent blog, and then there are all those guest posts you’ve written. Like these three, which I really recommend you, dear readers, to check out! (I am especially fond of the one about Queen Anne)

1) Stuart Britain: What was life like for ordinary people?: https://www.historyextra.com/period/stuart/stuart-britain-what-was-life-like-for-ordinary-people/

2) The Shocking Sex Scandals of the Seven Stuart Monarchs: https://www.historyhit.com/the-love-lives-of-the-royal-stuarts/

Anna: I have asked Andrea to share an excerpt with us, and she has chosen to give us a peek of her latest book. For those who go all “aaahhhh” when considering the handsome Earl of Rochester, this little excerpt may have you reconsidering – at least a bit! 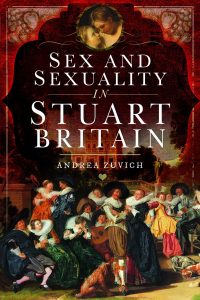 Excerpt from Sex and Sexuality in Stuart Britain (2020):

According to Stuart-era physician Richard Wiseman:
‘when a man hath had to do with an impure woman, either he hath some heat of inflammation on the Penis with excoriation, which ariseth soon after coition, and is caused by the affliction of a virulent humour, or else he finds a heat in his Urine, and in a day, two or three, a Gonorrhoea or issuing of virulent matter out of the seminal vessels through the urethra’.

Gonorrhoea, akin to many other STDs, includes symptoms which affect both men and women, such as a ‘burning’ pain while urinating and discharge from the penis or vagina—which may have led people to assume that they had a urinary tract infection (which could nevertheless be fatal during the Stuart period if the infection spread to the kidneys). Gonorrhoea was very dangerous for pregnant women since it could cause miscarriage and, even if that didn’t happen, the bacteria could cause permanent damage to the child’s vision.

Of course, the Stuarts didn’t have antibiotics at their disposal, but suggestions for the treatment of Gonorrhoea were available in many herbal remedy books of the time. William Salmon’s Pharmacopæia Londinensis:
Or, The New London Dispensatory (1702) suggested that Gonorrhoea could be treated with a drink made from Iris Florentina mixed with vinegar.
John Wilmot, 2nd Earl of Rochester—one of the most infamous seventeenth-century hedonists—had a solution for when he wanted the services of a prostitute but worried about contracting a venereal disease:
‘I send for my whore, when for fear of a clap, I spend in her hand,
and I spew in her lap’.
In other words, he opted for a ‘hand-job’ and ejaculated onto her lap. Later in the same poem, however, he has no such qualms when he has sex with (or anally rapes?) his page.

Syphilis is believed to have been brought to Europe from the New World by conquering Europeans (who in turn took smallpox to the Americas, devastating the indigenous populations). It is one of the most notorious
sexually transmitted diseases because the ulcers that are associated with it are intensely painful and, if the disease is left untreated, it can lead to blindness and even insanity.

There are four stages to syphilis, which increase in severity: primary (in which generally painless chancres appear), secondary (a large rash appears and fever occurs), latent (symptoms go away), and tertiary
(in which any number of internal organs can be severely affected, potentially leading to death). Regarding genital sores, men who suffered from syphilis could have extremely painful ulcers appear on their penis and perineum, and women on their vulva. Pregnant women who had syphilis passed the disease on to their children. The effect of congenital syphilis on children is particularly heart-rending, due to the disfigurement and painful ulcers the disease causes.

The aforementioned John Wilmot, 2nd Earl of Rochester, is believed to have suffered from several sexually-transmitted illnesses, including syphilis. According to John Aubrey—whose short biographies in his
Brief Lives should be taken with a pinch of salt—Elizabeth Broughton was ‘a most exquisite beauty, as finely shaped as nature could frame’. This beauty, Aubrey went on to write, moved to London, where she became
a courtesan. She was eventually spotted by Richard Sackville, 3rd Earl of Dorset (1589-1624), who made her one of his (many) mistresses. Unfortunately, Elizabeth contracted ‘the pox’—and died from it. 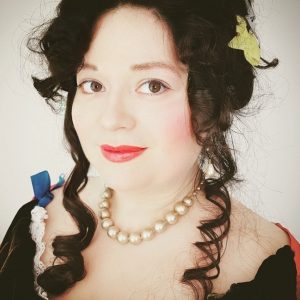 Author bio:
Andrea Zuvich (b. 1985) is an independent seventeenth-century historian and anthropologist specialising in the House of Stuart (1603-1714). Zuvich obtained degrees in History and Anthropology at the University of Central Florida and is the host of the popular ‘The Seventeenth Century Lady’ blog. An active user of Twitter since 2009–as @17thCenturyLady–she created the well-received #StuartsSaturday hashtag.

Zuvich is also a historical consultant for TV, film, and radio (NTR Netherlands, BBC, BBC Radio 4). She most recently appeared in BBC Four’s Charles I: Downfall of a King. She has been a frequent contributor to various history magazines and has written for The Huffington Post UK, History Scotland, BBC History Extra, All About History, Britannia Magazine, and History of Royals.

She was one of the original developers of and leaders on the award-winning Garden History Tours at Kensington Palace. Zuvich is also a trained actress and professional voice-over artist and audiobook narrator.