Being a medieval king came with all sorts of challenges, chief among them how to stop people from rebelling and in general causing unnecessary upheaval in your country. Sheesh: couldn’t they just accept that the one in charge was the king? Only the king? Clearly, something had to be done to keep people on the straight and narrow, which is why – or so the story goes – late in the 13th century, Edward I decided he needed to up the death-penalty somewhat, make it even more of a deterrent. Specifically, Edward I wanted people considering treason to think again – which was why, on October of 1283, he had the last Prince of Wales, Dafydd ap Gruffydd, subjected to horrific torture before the poor man finally died. Dafydd thereby became the first recorded person to be executed by the gruesome means of being hanged, drawn and quartered. I’m guessing Dafydd would have preferred being remembered for something else… 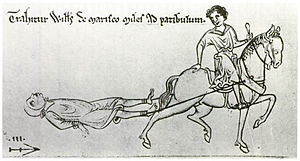 To be thus executed involved a lot of stages. First, you were tied to a horse (or in some cases several horses) and dragged through the town. Doesn’t sound too bad, you may think, but imagine being dragged over uneven cobbles, over gravel and stones, mud and slime, while the spectators lining the road pelt you with stuff – hard stuff, mostly. By the time the victim arrived at the gallows, he was a collection of bruises and gashes, his garments torn to shreds. Chances were, the man couldn’t stand, but stand he had to, and soon enough he was hoisted upwards, to the waiting noose. 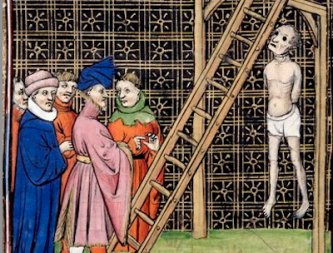 The second stage involved the hanging as such. Now, in medieval times, hanging rarely resulted in a broken neck. The condemned man didn’t drop several feet. Instead, the victim was set to swing from his neck and slowly strangled to death. A painful and extended demise, with the further indignity that when a man dies, his bowels and bladder give. However, the unfortunate sod who’d been condemned to being hanged, drawn and quartered, never got to the bladder and bowels part. He was cut down before he died and placed before the executioner and his big, sharp knife. The horror was just about to begin.
In some cases, the executioner started by gelding the man. Loud cheers from the spectators – or not, depending on who was being executed. Executions generally drew huge crowds, people standing about and snacking on the odd fritter or two while watching the condemned die. Nice – but hey, we must remember this was before the advent of TV and stuff like Counterstrike 4. People have always enjoyed being entertained with violence – which says a lot about the human race in general. 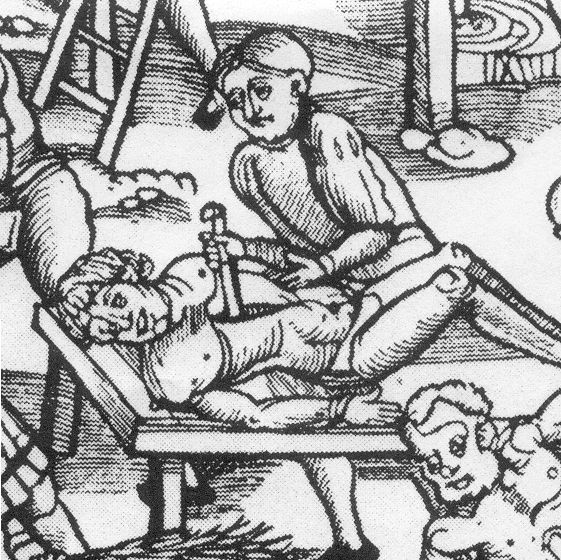 Once the condemned man had been relieved of his manhood (not something he’d ever use again anyway), he was cut open. A skillful executioner would keep him alive throughout the process, ensuring the dying man saw his organs being pulled from his body. And then, once he’d died, they chopped him up, sent off selected parts to be displayed in various parts of the kingdom, and buried what little was left over.
Not, all in all, a nice way to die. Men condemned to die that way must have swallowed and swallowed, knowing full well that no one could bear such indignities and die well. Before he drew his last breath, he’d have cried and wept, suffered horrific pain, hoped for the release of unconsciousness, only to be brought back up to the surface so as to fully experience what they did next to him. A truly demeaning death – most definitely a deterrent! 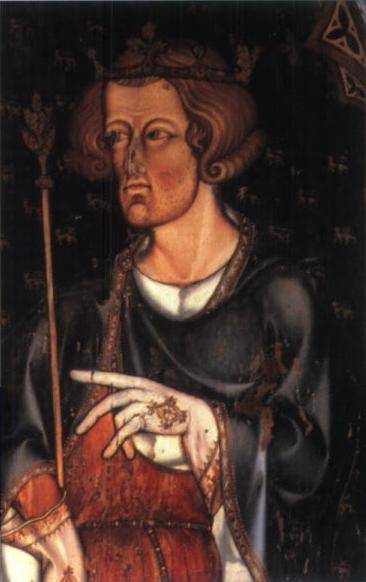 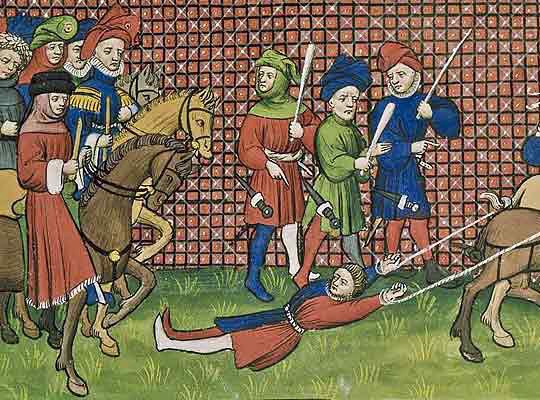 To celebrate his new lands, Despenser had Llywelyn Bren removed from the Tower. Despite the lack of a formal royal approval, the Welshman was handed over into the less than loving hands of Despenser and carried back to Wales sometime in early 1318. In Cardiff, the poor man was attached to two horses, dragged through the town to the waiting gallows where he was subsequently hanged before being cut down and resuscitated enough to see (and feel) his heart being cut out. Once dead, he was quartered and Hugh Despenser appropriated Llywelyn’s lands, imprisoned his widow and as many of his sons as he could lay his hands on.
The English nobility was appalled. More particularly, Roger Mortimer and Humphrey de Bohun were enraged. With what right had Despenser deprived Llywelyn Bren of his life? After all, Llywelyn Bren had been sentenced to imprisonment in London, not execution in Cardiff. Even worse, the man had died the death of a traitor, an awful extended death that a man like Llywelyn Bren did not deserve – this was a man both de Bohun and Mortimer held in high regard, an educated man with whom the Mortimers even shared (distant) kin. The king was expected to act, punish his favourite for this blatant disregard of the law. Except, of course, that Edward II didn’t, proving yet again to his disgruntled barons that he was not much of a king – or a man of his word. Or a defender of law and justice. All in all, a lesser king than his father.
When Roger Mortimer and Humphrey de Bohun – together with the royal cousin Thomas of Lancaster – rose in rebellion in 1321, one of the reasons they put forward was the despicable treatment of Llywelyn Bren. The royal chancellor Hugh Despenser had violated the law and effectively murdered a loyal servant of the king, with not so much as a slap on the wrist as retribution. England, the rebel barons claimed, deserved to be ruled by better men, men who respected law and order.

And so, indirectly, the awful death of Llywelyn Bren set in motion events that would subsequently lead to the deposition of a king – and the equally harrowing death of Hugh Despenser, who died just like Llewlyn Bren did, in November of 1326. Maybe Llewlyn smiled down from the skies as he saw Hugh suffer. One who definitely smiled was Roger Mortimer, now permanently rid of that personal burr up his backside, the equally ambitious – and capable – Hugh Despenser.
(The original version of this post was written for English Historical Fiction Authors – but it has been somewhat modified)

4 thoughts on “Hanged, drawn and quartered – not a death to aspire to”