Some years ago, I was a member of a retweet group. One of the other members was today’s guest, Jessica Knauss, and I very soon discovered she and I had a lot in common, starting with a love of all things medieval—especially if set in Spain. Having discovered Jessica’s blog—because seriously, how can one NOT like a blog with the subheadings “Spain. The Middle Ages. Rhinos.” –I have since had the pleasure of enjoying several of Jessica’s well-written post, most of them geared towards the dramatic events that make up the building blocks of her recently released novel, Seven Noble Knights. I have as yet to read this—it just came out some days ago, but to judge from the first few chapters, I’m expecting nail-biting entertainment, if somewhat bloody at times. And I can tell you I am already very, very sceptical of the fair maiden. Methinks all that beauty hides a dark and twisted soul… 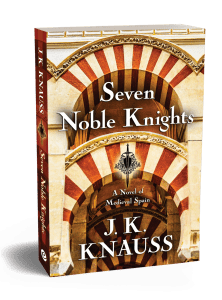 These days, Jessica lives in Spain. She, like me, is fluent in Spanish but she has the added benefit (from a medieval perspective) of having studied Medieval Spain extensively. She is therefore a handy go-to person when considering if the patronym Juanez (son of Juan) was ever used (Yes, she said, although it hasn’t survived into our era) and is also a fount of knowledge on anything related to Alfonso X of Castile. Frequent visitors to my blog may note that although I have written about a lot of other Alfonsos, I have not dedicated an entire post to this Alfonso, which is due to the fact that this is a figure that must be approached with caution and respect.

Jessica is a dedicated writer. How else to describe a woman who has doggedly stuck with writing her daily quota no matter if she’s moving or in a car. And should there not be a laptop handy, Jessica will simply resort to any piece of paper she finds laying around. It goes without saying that today’s guest a) does not need a structured environment to write b) would have been quite at home as a clerk in medieval times, carrying her little portable desk with her as she moved from one place to the other.

Anna: Why the medieval period?

Jessica: I’ll keep it simple and say my love of the Middle Ages began with The Princess Bride. The movie came out when I was a very impressionable twelve-year-old. I couldn’t get enough of the colors, castles, and adventures and read the novel ten times before I turned fourteen.

Jessica: The real watershed moment for me to take a serious interest in the Middle Ages occurred in a music appreciation class while studying abroad in Córdoba, Spain. One of the first pieces we listened to was a Cantiga de Santa María—talk about color and adventure! This largest medieval songbook was assembled in the court of thirteenth-century King Alfonso X el Sabio, whose fame as a lover of culture, science, and learning quickly turned him into the first love of my life. After many other adventures, I ended up writing my PhD dissertation about the Cantigas (available as Law and Order in Medieval Spain). Once I was out of grad school, I finally decided that the best way to show my enthusiasm for the Spanish Middle Ages was to bring the excitement to readers in English through stories and novels.

As an important side note, I’m grateful to have had my serious introduction to the Middle Ages through the multicultural, multiethnic court of Alfonso X. That first listen to the cantiga revealed obvious Arabic influence, and learning the stories and looking at the illustrations, I could take for granted that the medieval world was not monolithic in any way. Throughout modern history, radical groups have appropriated medieval imagery to promote nostalgia for a white masculinist and religiously bigoted idea of the past that, thankfully, never existed. These narrowminded falsehoods have become the cultural current of the idea of the Middle Ages. Sometimes people ask me why I’m interested in such a “backward” time period. Thanks to Alfonso X’s embracing of all knowledge, I avoided false impressions like that. (Anna: I think you make a very important point here, about diversity in medieval times. Obviously, the Iberian Christian states would have had easier access to different cultures, languages, philosophies and religion than other European states—this due to closer geographic proximity—but I believe we tend to believe things were much more monochrome than they actually were)

Anna: Tell us a bit about your medieval books!

Jessica. Seven Noble Knights is based on a lost medieval epic poem I read about while studying for my PhD. The only fragments that survive are found in Alfonso X’s history of Spain, so I justified my fascination with the story by telling myself I was still honoring Alfonso’s work. This legend has it all: family, romance, battles, revenge, northern Spain, southern Spain… and it’s still the only novel with a bloody cucumber toss. That bizarre episode was what first captured my imagination and more or less forced me to write this novel. (Anna: Peeps, do NOT miss out on that cucumber post!)

I was also honored to have a story in the aptly timed We All Fall Down anthology, which though it focuses on the effects of the Black Death, is a book full of resilience and hope for humankind.

Jessica: There’s loads of material burgeoning with strong women, rash actions, and impassioned consequences left in the histories, and they’re calling me to write a female-focused sequel to Seven Noble Knights. A further continuation of the history would show what happened when the young Castilian count was murdered the same day he met his bride-to-be! Given world enough and time, I’ll write those and many other stories! (Anna: Wait, wait: he’s murdered upon meeting his intended???How sad is that? You need to write an opera, honey.)

Anna: What are you working on right now? (may be redundant, depending on your reply to the question above)

Jessica: For 2021, I want to celebrate Alfonso X’s 800th birthday by releasing a book of short stories based on some of the miracles in the Cantigas de Santa María. These stories are set all over Spain and a couple of places abroad, and are always surprising. There’s a woman who has to defend a castle, a man who accidentally hires the Devil, and a woman who has to jump off a cliff to prove her innocence, to mention three. Spoiler alert: There are only happy endings in this bright and colorful medieval world! I’ve written most of the stories, so editing and publishing will soon become the priority. (Anna: What a lovely idea! I bet Alfonso would be thrilled.)

Anna: I have had the pleasure of reading Jessica’s posts for some years by now—yes, I’ve been lurking in the shadows, dear Jessica, intrigued by the fact that you’re as interested in (although much more knowledgeable) as I am in medieval Spain. Anyway: I asked Jessica to choose some of her favourite posts and she came back with these three excellent suggestions:

That time a Castilian queen and an Aragonese king got married and unleashed a costly war (this would make a fantastic novel!): https://unusualhistoricals.blogspot.com/2014/06/hea-or-not-urraca-of-leon-castile-and.html (Anna: Ah yes: that’s one of my own favourites which is why I also wrote a post about it ? It would make a great novel, but where is the Happily Ever After, I ask you?)

A visit to a Romanesque church in Zamora with a free download of a zany local legend: https://jessicaknauss.blogspot.com/2020/01/zamoras-medieval-treasures-santa-maria.html

Jessica has chosen to present her recently released Seven Noble Knights in a somewhat different format than your traditional excerpt. Instead, she gives us a sequence of teaser pictures. Enjoy! 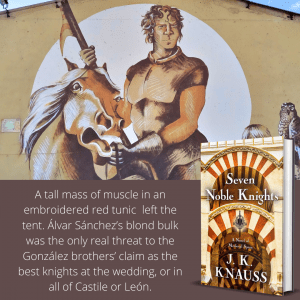 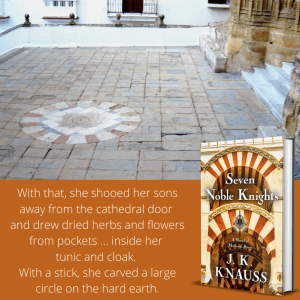 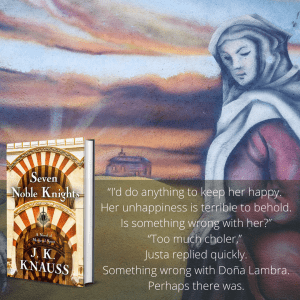 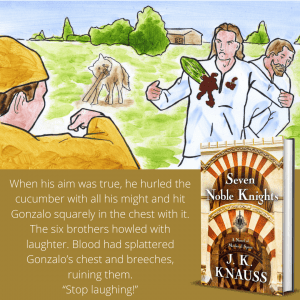 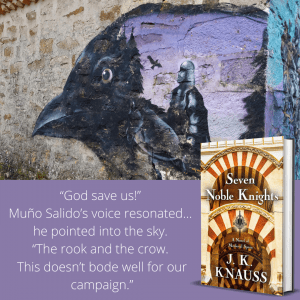 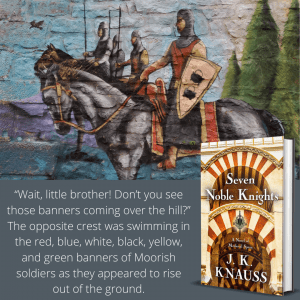 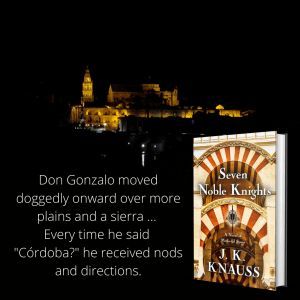 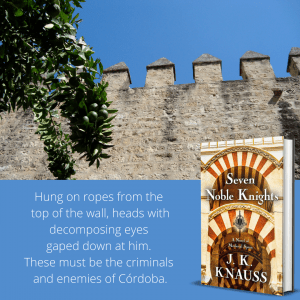 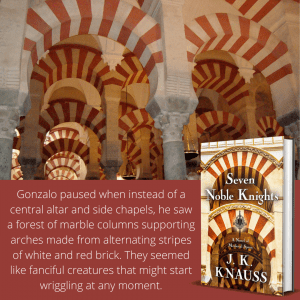 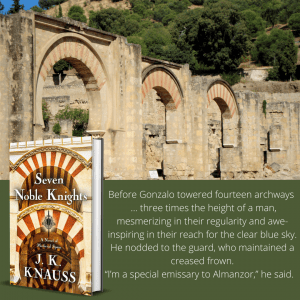 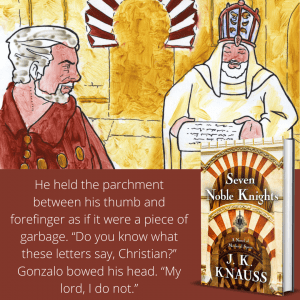 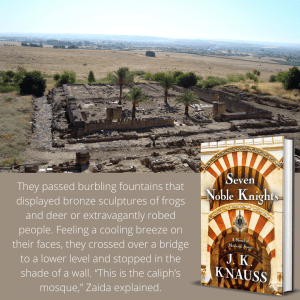 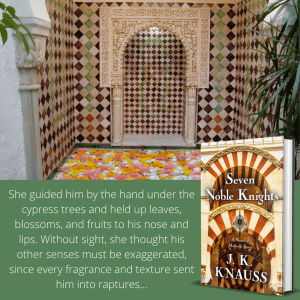 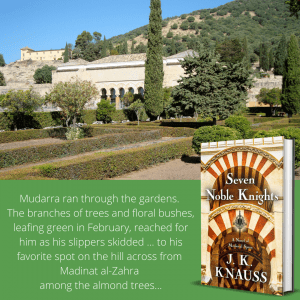 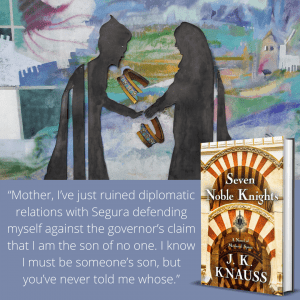 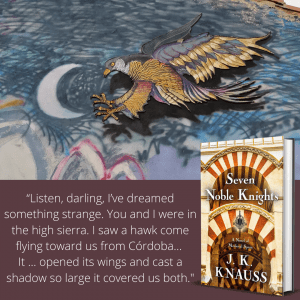 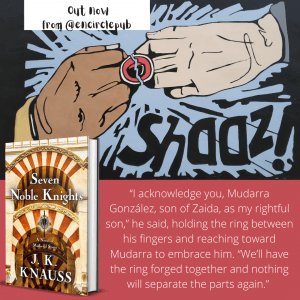 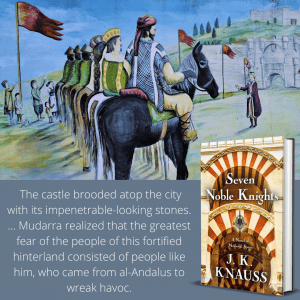 Well, peeps, what did you think of this? I found it all rather intriguing – and as frustrating as I imagine it is to find fragments of a medieval legend and wonder just what happens in the cracks 🙂 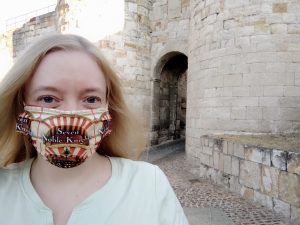 J.K. Knauss has settled in beautiful, historical Zamora, Spain. She also writes fantastical, unpredictable contemporary fiction under the name Jessica Knauss. She is a professional editor who can help make your book the best it can be when she’s not singing in one of Zamora’s many choirs or enjoying traditional Spanish cuisine made by her roommate.

Find out more about Jessica on her website. www.jessicaknauss.com

Other than on Amazon, Seven Noble Knights can also be found here and here!

This is the last Much medieval mayhem post. I hope you, dear readers, have enjoyed meeting the various writers as much as I’ve enjoyed hosting them. Thank you to all participants, and for those of you who missed last week’s post, check out Mary Anne’s contribution. Or start at the very beginning and read your way through all of them!