I’ve had a couple of chapters lying around for ages on my laptop. My Alex and her Matthew (protagonists of my time travel series The Graham Saga) have been trying to get my attention for about as long, Alex growing increasingly irritated as I’ve focused on other stuff, like my recently released medieval book, His Castilian hawk.

“Who cares about a medieval knight and bloody Wales?” she exclaimed repeatedly. “Seriously, Anna, they’re make-believe! But our little Duncan…” She twisted her hands together, and I didn’t quite have the heart to tell her that she is also make-believe. Well, okay, okay, seeing as I TALK to her on a regular basis she is almost real. Almost, mind you.

Anyway, I was pretty worried about little Duncan as well, which is why I was suddenly writing like crazy, because both Alex and I just had to find out how things would turn out. Phew. Very exhausting—and mentally quite confusing, as Noor and Robert (you know, the make-believe protagonists of His Castilian Hawk who are presently in medieval Aragon) have required some help as well. It’s not as if I can ignore when their lives hang in the balance.

But, to Alex’s relief (and mine, because this character of mine sure can nag. “Och aye,” Matthew says. “Like a ratter with a mouse when she sets her sights on something.” Err… Matthew and I both throw a quick look at Alex. “A very wonderful ratter,” Matthew adds hastily. “Are you comparing me to a dog?” Alex asks in a dangerous tone. “You?” Matthew pulls her close and smacks a kiss on her cheek. “You’re my very own personal miracle, lass.” He kisses her again. On the mouth this time. Nice distracting move…)
Apologies for a very long parenthesis. Where was I? Oh, yes: to Alex’s relief I have now finished the Duncan story. Allow me to rephrase: I have finished this Duncan story, which should be seen as a starting point to future books in which the adult Duncan will play a central role.
“Adult Duncan?” Alex gives me a flustered look. “But if he’s an adult, that means…” She swallows and throws Matthew an anguished look.
I am equally anguished, but no one has eternal life—not even characters like Alex and Matthew. Except, of course, that in my head and heart they will always live. Always—no matter how adult Duncan is.

Right: back to the subject of today’s post—before I start crying. I give you The Soft Touch of Angels. At only 0.99c/0.99p this novella gives you a couple of hours of immersion into the loving and somewhat chaotic world that is the Graham family. 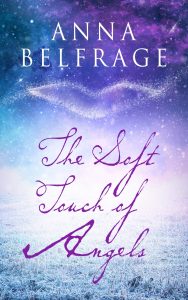 After months of torment, Duncan Melville has had enough and punches one of his bullies in the face. In retribution, he is set upon by the tormentor’s much older brother…

There are few things that upset Alex as much as seeing a member of her family hurting. So when her ten-year-old grandson is severely injured she decides the only thing to do is to take him home, never mind that Duncan’s biological mother, Sarah, will likely throw a fit.
Sarah does throw a fit. She wants the living reminder of the terrible events that led to his unfortunate conception gone, immediately. Alex refuses. Duncan is a child—a child of her blood—and she will not fail him.
The Christmas spirit in the Graham home is seriously threatened as unhealed wounds break open. Caught in the middle is Duncan, a boy who doesn’t quite know where he belongs—or with whom.

I hope you found that tantalizing. And to celebrate this release, I am offering a give-away. Leave a comment and win your own e-book copy! I will choose the winner on Friday.

12 thoughts on “Celebrating Christmas early with a new release and a giveaway!”