Today’s guest has the UK record in most Bronze Age axehoards found on one field.  Impressive – as is the fact that there is a record in this somewhat obscure “sport”. Other than her axehoards, Nicky Moxey is also a lady one should avoid riling as she is an avid practitioner of Karate.
Nicky and I met online. Over the years, we’ve discussed this and that about our most favourite period ever. But until I read her answers to my various questions below, I had no idea the story behind her own novels was so extraordinary. I think you will all agree once you’ve heard it, so let’s get down to the nitty-gritty.
Anna: Nicky, welcome to my blog! How about you start off by telling us why you’re so fascinated by the medieval period.

Nicky: Hi Anna – nice to be here. As to the medieval period, I literally fell over it ? I was doing some metal detecting in a meadow, and got a signal that nearly blew my head off. I got my friends from the local archaeology unit in to do a dig, and it turned out to be a lead sheet, about 2’x18”, on top of a destruction layer. Much research (and carefully plotted finds) later, and we decided that what I’d found was a 12thC priory, not on the map. (Anna: I told you this was pretty awesome, didn’t I????) Wonderfully, it turned out that the local Records Office have about 1/3rd of the priory’s cartulary; and that the man who founded it was regularly mentioned in Henry ll’s Pipe Rolls; research material in plenty!

Anna: That is so wow! So, this find inspired your writing, right?

Nicky: Yes, that founder, Wimer the Chaplain, most certainly did. He was born less than 100 years after the Norman invasion, the son of a moderately well off Saxon peasant – they held ¼ of a knight’s fee; Wimer should have stayed a Saxon peasant, maybe becoming apprenticed to a tradesman in Ipswich and setting up in a trade. Instead, he first appears in the Pipe Rolls as the personal Chaplain to Hugh Bigod, then shortly after the rebellion of 1173, he was made the Sheriff of Orford, and was building King Henry’s new castle and church there; Wimer had become a priest, and was the Rector of the church. Being a Sheriff was a huge step up – and Henry was fussy about his Sheriffs; he must have become known to the King personally to have been offered the job.

Then he got excommunicated by Thomas a’Becket, and he lost job, his church, everything as a result; it must have been truly awful for him. Luckily, Henry stood by him, and after a short period of exile, Henry called him back to a huge promotion – the Sheriff of all Norfolk and Suffolk, probably the 3rd richest job in England at the time. He was still excommunicated, though – and the sentence was confirmed 3 times by a’Becket and even the Pope! There’s no record of him being de-excommunicated, if that’s the term; but eventually he retires as Sheriff and comes home to found a Priory (the one I discovered!) to save his soul.

The thing that turned all this digging, in the field and the library, into a novel (Sheriff and Priest)  instead of just a short historical paper was finding out that the person who gave him the land to found the Priory – 1000 acres, conservatively worth £14M in today’s money – was the King’s mistress…

Anna: Absolutely mind-boggling. Are you planning on revisiting this time period? If yes, tell us more!

Nicky: Wimer’s Priory is in a lovely spot, on a gentle slope above a small stream fed by a couple of springs; with woodland as a windbreak, and plenty of grazing for sheep. The meadow has never been ploughed, and my metal-detecting efforts have pinpointed church, cloisters, stables, gatehouses, fish kitchens, accommodation for lay brothers or guests; it’s a pretty much perfect location.

But somewhere in the 13thC the Priory moved – lock, stock, and barrel as the saying goes – to a terrible location about a mile and a quarter downstream; to a meadow that floods every year with the first rain of winter and stays that way until summer. The second book, The Priest’s Son, is the result of much unpicking of 12th and 13thC lawsuits to try and figure out why, and why the Papal Nuncio in charge of supervising the signing of the Magna Carta decided to take a personal interest – and the answer came scrawled in pencil across the court book of one of our local manors ?

Anna: Ha! That’s quite the cliff-hanger you’re leaving us with. What are you working on right now?

Nicky: The third book will come up-time a little and be linked to the local parish church. Here in Suffolk, many churches have near-identical carvings on either side of the church door; a king and a queen. We have the regulation queen, but instead of the king, there’s a bishop. Who he was, and why he’s been allowed to upstage the King, will occupy my mind as soon as the Norwich Cathedral library allows scholars back.

In the meantime, an entirely fictional monk-candidate called Thomas has elbowed his way onto my notebooks; he’s a physician who learned medicine in Sicily then found himself healing wounds on crusade. He’s suffered what we would know today as PTSD as a result, and has slunk home to run away from medicine… But the need to heal keeps finding him, even in my sleepy little Priory. I’m loving the research for this one, which is all text book based – and it’s all transcribed into English, what bliss! About half the book (a series of short stories) is done.

Anna: Just so you know, Nicky breathes impressive life into Wimer. For those intrigued by fiction firmly rooted in researched fact, this is a must read. Nicky maintains a blog called Eclectic Pleasures where she tends to write about her finds. For obvious reasons, it is important not to disclose the position of the priory mentioned above, so she has not written about it at all. Still: here are a couple of posts I’d recommend you to read. In difference to me, Nicky has mastered teh art of abbreviation, so her posts are often short and informative 🙂

Now for an excerpt from the first book about Wimer, Sheriff and Priest ; 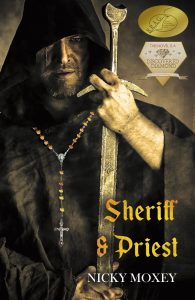 Wimer chooses the place for his Priory…

Ida’s factor had met him at Cattawade with a map of her estate. They spread the parchment on a sun-warmed rock at the port, and Wimer pored over it with the same feeling of awed amazement that had filled his soul since the land grant had succeeded. To his delight, he noted that his own bit of land did indeed abut hers, on the Eastern edge.

Once he was sure that he had the boundaries straight in his head, he dismissed the factor and rode on alone. He climbed up from the river valley, the wind pushing him uphill, until he came to the old Saxon ditch and bank – the start of his new domain. Now to find the perfect place for the Priory…

He stayed on the Great Way for a while, following it over the sandy soil of the Heath. A little more of it was being farmed than he remembered from his boyhood, but still he caught sight of a hare sunning itself in a gorse thicket. He waved to a couple of distant figures working on their strips and continued on.

After a mile or so, he followed a hunch, and took an old footpath down to the left. It wound through ancient woodlands, and then opened up to a wide valley. He dismounted and went on afoot. Sheep dotted the hillsides. Brother Stephen would approve – this is rich land. A rivulet cut through the valley bottom, the sound of it and the scent from an alder grove reached him on the breeze.

My boundary on this side is the stream between Dodnash and East Bergholt – is it this rivulet, or is the boundary further north? He climbed the hill. The line of trees in the far valley showed his border, hay meadows stretching steeply down to it.

He turned back to the broad valley and lent against the trunk of a massive oak. He felt completely at peace – not sleepy, but invigorated by the view. A hunting sparrowhawk swung into place, almost level with him. It made eye contact with him, and cried once, insistently. “Here!”

He pushed himself upright. Dear God, yes! Here! The church rising from the meadows, there by the alders. Dormitory and refectory next to it, forming part of the cloister square! Stables and fish ponds over there towards the birches, and houses for lay brothers and servants upstream!

He ran down the slope, and paced out the buildings in his vision. It can all be done, and more! He fell to his knees in the middle of his church-to-be, and tried to find words for the emotions filling him. Instead of words, music came.

Anna: Praise the Lord indeed! I just love how enthusiastic Wimer becomes as he does his mental lay-out. 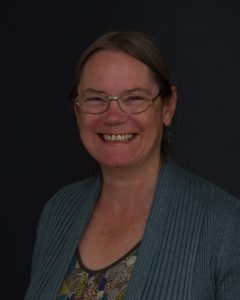 Nicky lives in the middle of rural Suffolk, UK, with a slinky black cat who’s far too clever for her own good.

In her spare time, she is an amateur historian/archaeologist, and in sunny daylight hours can usually be found out on a field somewhere with a metal detector and/or a trowel. Her first job was as an archaeologist’s digger, but alas, that didn’t pay the rent! She has added quite a few things to the Heritage England Record and the Portable Antiquities Scheme; but what really fascinates her is the stories behind the artefacts.

Finding the original site of the 12thC Priory she writes about (not where it’s shown on the map) is still one of Nicky’s proudest discoveries.

Nicky can be found on Twitter as moxeyns, and on Facebook as herself, plus The Dodnash Priory Chronicles. She is active in history, archaeology, and writing circles.

That’s all for today, peeps Check out last week’s post by Paula. Next week, Mercedes Rochelle will be popping by!

4 thoughts on “More Medieval Mayhem – meet a writer who dug her protagonist out of the ground!”