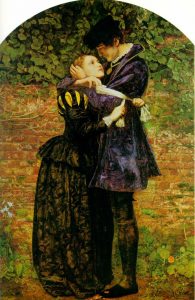 It is estimated that approximately 40-50% of all present-day marriages in the Western Hemisphere end in divorce. A rather depressing statistic, some say. A consequence of longer lifespans, the anthropologist will counter, adding that few marriages in the past spanned several decades—usually they ended due to the untimely death of one of the parties.

According to the anthropologists, human beings are serial monogamists by nature. If that is true, it must have been quite a relief for our ancestors (those living in pre-divorce times) when spouse number one croaked, leaving them to free to pursue their next relationship.

Personally, I am sufficiently romantic to believe in forever after love. After more than thirty years with the same man, I can also verify that such love does occur. Not that we go about in the throes of passion all day long, but still.

I am also of the opinion that people deserve to aspire to happiness, and if a marriage doesn’t work out, why condemn the parties to years of dissatisfaction? Divorce seems a much better option for everyone involved, including the children, who should not have to witness the bitterness of a disintegrating relationship at too close quarters.

Divorce has been around for much longer than us modern people believe. Even in pre-Reformation times, a dissatisfied husband who was sufficiently powerful and knew what hands to grease could get out of his marriage, mostly by claiming some degree of obscure consanguinity. Other valid reasons for divorce (or annulment) were insanity, pre-contracts or impotency. However, for the rank and file, marriage according to the Holy Church was an indelible sacrament, and once you’d said your vows there was no going back. I suppose people dealt with this by having low expectations on marital bliss and finding the love they needed elsewhere. Once again, easier to do if you were a man.

In the 16th century, Europe was swept by that religious whirlwind known as the Reformation.  One of the more fundamental consequences of the Reformation was that the level of literacy exploded (Protestant teachings expect the faithful to read their Bible, not listen to someone relate it to them). Another consequence was that certain matters were moved out of ecclesiastic control to secular control.  The issue of dissolution of marriages was, in some countries, one of them. Prior to the Reformation, a person desiring to be released from a marriage had to appeal to the bishops of an ecclesiastic court. After the Reformation, such matters could be handled through the “normal” legal channels.

One country that very quickly reformed its views on marriage – and divorce – was Scotland. Already in 1563, matters related to divorce were moved into a secular court, and in a very novel approach to this matter, Scotland allowed both parties to demand divorce due to adultery. (To exemplify just how modern this approach is, until well into the 20th century a woman demanding divorce due to adultery in f.ex. England also had to prove cruelty or incest or bigamy or “unnatural crimes” to be granted a separation) The 16th century legislators in Scotland went even further: a marriage could also be dissolved due to abandonment – by either party. 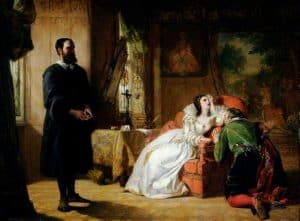 The powerful Scottish Kirk was all for these changes. The even more powerful Scottish reformer, John Knox, saw no reason to fetter people in unhappy marriages. (But in this post you can read how he and Mary Queen of Scots- – usually adversaries – worked together to try and salvage a disastrous marriage)  This is not to say it was easy to get a divorce – of course it wasn’t, and the number of granted divorces remained low. But the possibility was there, and over time marriages were “downgraded” from a sacrament to a contractual obligation – in line with the policy to have a secular court ruling on divorce.

In general, the Presbyterian Church frowned on arranged marriages. It was important that both parties enter their marital union willingly – at least in theory. These beliefs were also held by the Puritans – in many ways very influenced by the teachings of the Scottish Kirk, especially during the Civil War – who actively encouraged young people to ensure there was an affinity before wedding.  (Probably through religious discourse rather than wild and carefree jiving, but still…)

The relatively modern view on divorce as expressed by Scotland and the Presbyterian Church was far from universal. In England, getting a divorce remained a tricky and humiliating experience well into the 20th century.  Other Protestant countries, such as Sweden, also allowed divorce for adultery and abandonment from the 17th century and onwards, but the rulings remained in the hands of the ecclesiastic courts and the number of granted divorces was therefore extremely low. (However, Sweden expanded the reasons for allowing divorce around the 1660’s so that the king was given the right to dissolve a marriage if one of the spouses had attempted to murder or grievously harm the other. Woohoo) 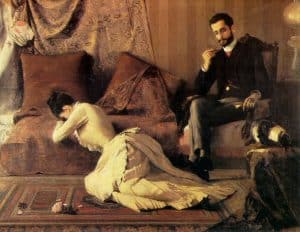 The collapse of a Presbyterian (or Puritan)  marriage in the 17th century was still something of a disaster – especially for the wife. Any children from her marriage remained as a matter of course with their father, and she had no visitation rights. Also, the stigma on a divorced woman was huge – even more so if she was the adulterous party. Adultery was considered a serious crime and the humiliated spouse had the right to claim redress – could even press for execution. In general, the parties settled for divorce, at times coupled with humiliating hours in the pillory for the faithless wife. 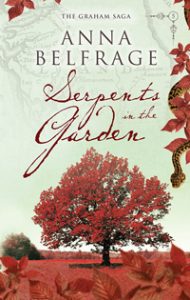 In my book Serpents in the Garden, fifth in The Graham Saga (albeit you can read every book as stand-alone), the marriage of a young couple comes to an unhappy end when the wife falls in love elsewhere. As my books are set in Maryland, and the couple in question belong to the Presbyterian congregation, the legal aspects can be quickly sorted, even if the cuckolded husband is left with anger and grief. Below is an excerpt:

“Adultery?” Minister Walker wrinkled his nose and looked Jenny up and down. “And you don’t deny this accusation, daughter?”
Jenny shook her head, keeping her eyes on her clasped hands. If only someone would hold her, not leave her standing this alone in front of the elders of the congregation.
“And you want a divorce,” Minister Walker went on, directing himself to Ian.
“Aye.”
The men before them huddled together in deep discussion, several disapproving looks thrown in the direction of Jenny who shrank further into herself, sinking her nails into the skin of her wrist to stop herself from crying.
“And the post-nuptials are in order?” a minister Jenny didn’t recognise asked. In reply, Ian handed over the contracts, drawn up by Simon.
“Well,” Minister Walker cleared his throat, “that was most generous of you, young Ian.”
Ian shrugged, a gesture that showed just how unimportant he found this aspect of the whole affair, and Minister Walker nodded compassionately.
“She must be punished,” the new minister said. “Such behaviour cannot be condoned.”
Jenny’s knees dipped, but she remained silent, concentrating on her breathing.
“I don’t want to,” Ian said.
The minister smiled benignly at him. “No, of course you don’t. This is, after all, your former wife. But this is a matter for us to decide, not you.”
“I don’t want to,” Ian repeated. “Isn’t it enough that I have to live through this pain? Must I also be humiliated in public?”
“You? But it isn’t you, it’s her,” the minister said. “A few hours in the pillory to make an example of her to all women here.”
A murmur of agreement rose from his colleagues.
“Aye, and all will ask themselves why.” Ian shook his head stubbornly. “No, I ask you not to do this to me.”

They had walked into the meetinghouse a married couple, and they walked out divorced, with Ian carrying the deeds. The midday heat struck them like a wet blanket, and they hurried for the shade afforded by the meetinghouse building.
“Will you be alright?” Ian asked.
“Do you care?” she snapped back, unable to help herself. She raised a hand to her tender chest and liked it that he noticed, a faint blush colouring his cheeks. Let him realise what he was doing, stealing her daughter from her!
“Not as such.” He shifted from foot to foot, looking uncomfortable. Finally, he gave her a stilted bow and made as if to leave.
“Ian?” He turned back towards her, and she tried to smile, although to her consternation her eyes were filling with tears. “Thank you for not allowing them to put me in the pillory.”
“I promised you, didn’t I?”
She scuffed her shoe back and forth over the cobbles. “Take care of my children.”
“I will.”
There was nothing left to say. For some minutes more, they stared at each other before he shrugged and turned away. “And I do care,” he added as he was leaving.
“I know you do,” she whispered to his retreating back, “and that makes it all such a waste.” Oh God, what had she done? She stood very still until he had disappeared from sight. Never until this moment had she been utterly alone, entirely without protection. Jenny sighed, bent down to pick up her few belongings, and, with a constricted throat, took the first steps of her new life.

Jenny is fortunate. Her ex-husband is a decent sort (understatement: Ian Graham is one of my favourite characters—vulnerable but strong—and I hope my readers agree) and ensures she has enough means at her disposal to start anew. Even so, she’s facing a struggle—and a lonely one, seeing as her children are lost to her, her family shuns her because she’s been unfaithful and she can’t exactly remain in Maryland, not when she’s walking about with the equivalent of a huge, if invisible, scarlet letter on her forehead.

The Graham Saga is about the life of two people who should never have met. My male protagonist, Matthew Graham, is a devout Presbyterian, a veteran of the Commonwealth armies and a man who, initially at least, tends to see the world as black or white. Which is why I gifted him with Alex Lind, an opinionated modern woman who had the misfortune (or not)  of being in the wrong place at the wrong time, thereby being dragged three centuries back in time to land concussed and badly singed at an astounded Matthew’s feet.

Due to religious persecution and an adventurous life in general, Matthew Graham and his wife end up in the Colony of Maryland, there to build a new life for themselves and their children. Not an easy existence. In fact, things are often excessively exciting—and dangerous—for both Matthew and Alex. You can read more about The Graham Saga here

2 thoughts on “I want out! – or how the history of divorce can inspire a book”