Today, I’ve invited Christina Courtenay over to share some information on runes, the Viking way of writing. Up here in Sweden, we have a number of runestones standing like silent sentinels over those that came long before us. These days, we consider them precious remnants of our past, some generations ago, they were viewed with fear, a vestige of a time when Sweden was pagan. 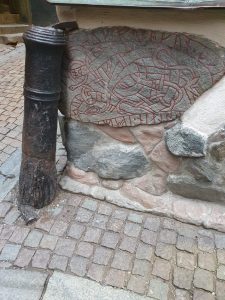 Once Sweden had embraced Christendom (you can read more about that here), many runestones were torn down and used as building material for churches – or for other buildings, like in the pic to the right, in the Old Town of Stockholm.

Christina has recently released a book called Echoes of the Runes in which the runes play an important role. I read the book in one sitting and really enjoyed the way Christina wove together the past with the present, allowing the story of Ceri and Haukr set in the 9th century to echo evocatively to the present day. Warmly recommended reading for those of you who enjoy a good dual time-line story!

Anyway: back to the runes, right? Christina, take it away! 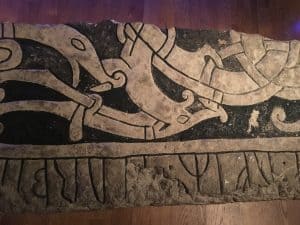 The word ”runes” is very evocative, isn’t it? It immediately conjures up images of fearsome Vikings, picture stones adorned with slithering snakes and dragons, as well as mysterious fortune-tellers or seeresses. Because runes weren’t just used for writing – they were also talismans against evil, part of secret rituals and carved into bits of wood or bark as protection. Magical!

The great thing about them is that they are not that difficult to learn because they were loosely based on alphabets similar to our present one, and therefore use more or less the same principle. Although that depends which runic alphabet you utilise of course – the older so called futhark (named after the first six letters f, u, þ, a, r, k) is the easiest one for us since it had a corresponding rune for almost all of our present day letters (24 altogether). It can be roughly adapted to write modern words, which makes it fun. This elder futhark dates from the 2nd to 8th centuries AD, so had been phased out by the time my story takes place (in the 870s), but I decided to stick with it anyway as it was easier for me – artistic licence ? (From the late 8th century the younger futhark took over, but this was a simplified version with only 16 runes which I believe requires you to speak Old Norse in order to know which one to use).

Vikings never wrote any books with runes – although in theory they could have done if they’d stolen enough vellum from some poor Anglo-Saxon monastery. Instead, in terms of writing, they seem to have only used them to either mark objects with the name of its owner or maker, carve inscriptions on rune stones which honoured a person for some reason, or to add graffiti in inappropriate places the way people still do nowadays. Laws, history and stories were instead passed down orally through the generations, usually in the form of story-telling or poems recited by the skald (poet/bard). 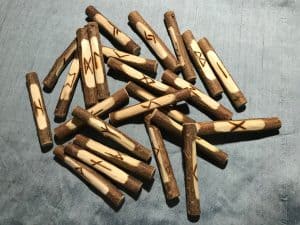 The other main use was for magic, and possibly divination and fortune-telling, although that has never been proven. Runes were definitely thought to have power and could be charms against things like evil, illness, bad luck etc, as well as curses. The word “rune” supposedly means something “secret” and perhaps the people who first used them were seen as special or powerful. Certainly, the vōlvas (seeresses) who performed ceremonies called seiðr might have used runes to create amulets. These days lots of people “cast the runes” to tell fortunes or predict the future, but that may be a modern invention.

Reading old runic inscriptions can be fun, especially the graffiti which can be found in the most unlikely of places. There are even a couple in the mosque of Hagia Sophia in Istanbul, Turkey, which are basically of the type “Halfdan was here” – so nothing changes! At Maeshowe, a Neolithic burial mound in Orkney, there are no less than twenty-nine runic inscriptions thought to have been cut some time in the mid-12th century. The place may have been used for shelter and the Vikings who overwintered there must have been exceedingly bored! A lot of the inscriptions are just names, but some are more informative, hinting at buried treasure or religion, while others contain sexual innuendos. Absolutely fascinating!

Even a beautiful stone lion statue now located in Venice, Italy, was defaced by Norsemen. The so-called Piraeus Lion is one of four, and originally during Viking times it stood in the port of Athens. Vikings serving in the Varangian Guard (a special elite unit of Scandinavians in the Byzantine Emperor’s army) would have come across it there. The lion has two long runic inscriptions on its flank and shoulders. This carving wasn’t just any old graffiti though, it’s been elaborately done in the way a rune stone would have been decorated, with the writing enclosed in inside a snake-like scroll.

Some of the most famous rune stones mention Vikings who travelled to faraway lands – Garðaríki (Russia), Grikkland (Greece/Byzantium) and Serkland (the Middle East), for example – but they didn’t go there as tourists or sunseekers, and if they had stones raised in their memory, it was usually because they didn’t come back. (Although some did and a couple of stones claim that a man “took his share of gold” and returned). From Sweden lots of Norsemen travelled the incredibly long and arduous route through Russia down to the Black Sea and on to Istanbul (Byzantium in those days, although the Vikings called it Miklagarðr). The majority went as merchants, hoping to make rich profits – and they did, if they actually managed to make it back in one piece! But some stayed for a while and joined the Byzantine Emperor’s army as mercenaries in the Varangian Guard. They were known for their fierceness and for being tall and fair-haired. 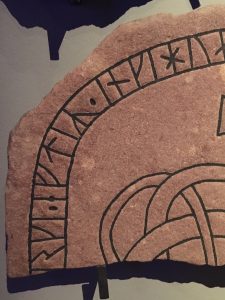 I couldn’t resist having a rune stone in my story and a character has one raised in memory of her father. The inscription goes something like this: “Jorun let ræisa stein þenna æfter faður sin …” If you are Swedish, like Anna and myself, you can easily understand this even though it is written in Old Norse, and that, for me, is part of the fascination. The runes may never have been used to write fat tomes on the history of the people who invented them, but nevertheless they give us tiny, important and fascinating snippets. Little insights into the minds of the Vikings that are truly precious! I, for one, am very grateful to them.

As to Echoes of the Runes, here is the blurb: 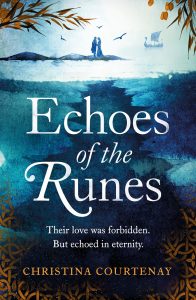 Their love was forbidden. But echoed in eternity.

When Mia inherits her beloved grandmother’s summer cottage, Birch Thorpe, in Sweden, she faces a dilemma. Her fiancé Charles urges her to sell and buy a swanky London home, but Mia cannot let it go easily. The request to carry out an archaeological dig for more Viking artefacts like the gold ring Mia’s grandmother also left her, offers her a reprieve from a decision – and from Charles.

As Mia becomes absorbed in the dig’s discoveries, she finds herself drawn to archaeologist Haakon Berger. Like her, he can sense the past inhabitants whose lives are becoming more vivid every day. Trying to resist the growing attraction between them, Mia and Haakon begin to piece together the story of a Welsh noblewoman, Ceri, and the mysterious Viking, known as the ‘White Hawk’, who stole her away from her people in 869 AD.

As the present begins to echo the past, and enemies threaten Birch Thorpe’s inhabitants, they will all have to fight to protect what has become most precious to each of them …

Buy it on Amazon UK or Amazon US

If you want to find out more about Christina and her many books (I’ve read them all – so should you if you enjoy good historical fiction with a dollop of time-slip!) check out her website.
You can also follow her on FB, Instagram, or Twitter.