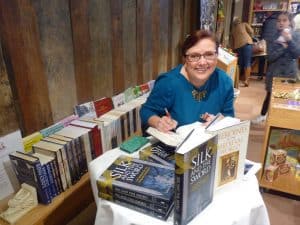 Today, I’ve invited Sharon Bennett Connolly to visit. For those of you who have as yet to make Sharon’s acquaintance, I suggest you pop over ASAP to her blog to read her interesting posts about medieval ladies – or read one of her books. Sharon writes non-fiction and is a fount of knowledge on all those women who contributed to the tapestry of medieval life. I am looking forward to reading her latest book but decided to have her over to share some info about herself and an excerpt. I rather like Sharon’s choice of excerpt: she introduces us to one of the true mystery women of the medieval ages! But first some questions:

So, what drove you to start your blog?
Shortly after joining Facebook, I joined several history groups, but noticed that most were king-orientated – all about the men. So, I started a group called Medieval Queens (it is now called Medieval Queens and Heroines), just to give the women some attention. As a consequence, I also started writing short biographies of different queens, to share in the group. It got to be such a habit that, in no time at all, I found myself doing one a week. A few months later, my husband gave me a blog as a Christmas present – History, the Interesting Bits. It was a title I’d had in mind for a book for a number of years, but never had the confidence to actually write it (the reems of research are still in the house, somewhere!).

So, I started writing and publishing short biographies of historical characters, and the stories that I have always found so fascinating, such as the French Affair of the Silk Purses and the murder of Arthur of Brittany. The first few posts were fairly short – about 6/700 words long, but as I gained confidence, they got longer and are now regularly around the 1,500-2,000 words mark. I love doing the research, finding the stories that I find fascinating, and also the links between individuals; for instance, after writing a blog post about Joan of Kent, I thought it only fair that I should also write one about each of her husbands. I still have to write the article on the Black Prince (it’s going to be rather long), but Thomas Holland and William Montagu were wonderful stories to write, and completed the scandalous love triangle that saw Joan’s marriage to Montagu annulled so she could return to her ‘first’ husband, Holland.

How different is it to compile mini bios for a book versus the posts you’ve been writing?
It isn’t that different and has been quite a natural progression. My blog posts were already getting longer when the idea of Heroines of the Medieval World came to me. Heroines is also a series of short biographies, though longer and more in-depth than on the blog, with four or five women in each chapter. It took me a while to decide how the book would be presented, but in the end, using different women as examples of the way these incredible people helped to shape the medieval world seemed the sensible way to do it. So you have chapters entitled The Medieval Ideal, Warrior Heroines, True Love and The Survivors. 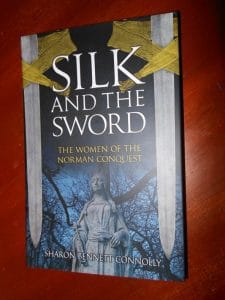 Silk and the Sword: The Women of the Norman Conquest goes one step further from the blog, where each chapter is a biography of one of the prominent women of 11th century England, such as Emma of Normandy, Edith Swanneck and Matilda of Flanders. This gave me the chance to explore deeper into the individual stories, but also presented a problem; what to do with the overlaps? There were several events which touched the lives of a number of women, and I was afraid that I would simply end up repeating the same stories again and again. However, I think it worked, as I looked at the stories from the individual’s point of view. So, although some events get repeated, the focus is changed and you are analysing the event from a different viewpoint – and it actually makes the story more complete.

Would you have wanted to live in medieval times? If so, in what period?
I love reading and researching the medieval era – I spend most of my life there, to be honest. However, I do like my creature comforts and I’m not sure I would enjoy actually living without an electric shower and a kettle! And I like the fact there are opportunities for women to be successful, without them being accused of being masculine, or not acting womanly. So, no, I am quite relieved that I live in modern times.

If I had to live in the medieval era, I think I would choose Edward III’s England. He has always been my favourite king, I love the ideas of honour and chivalry that seem to have been an integral part of his court. It was also a time of great literature, with the likes of Geoffrey Chaucer, John Gower and Julian of Norwich, creating some amazing works.

It would have been an interesting time to live – that’s so long as you survived the dreadful Black Death, of course!

Agree. Dying of the plague seems to have been something of a bummer…Thank you, Sharon for this, and let us now move on to the excerpt you’ve chosen to share with us. First of all, why this lady?

There is one lady associated with the Norman Conquest who I found particularly fascinating. However, she is quite an enigma. No one seems to be sure of her actual identity, which has caused a lot of discussion among historians over the centuries. She appears in one scene of the Bayeux Tapestry, under the name, or designation, of ‘Ælfgyva’. 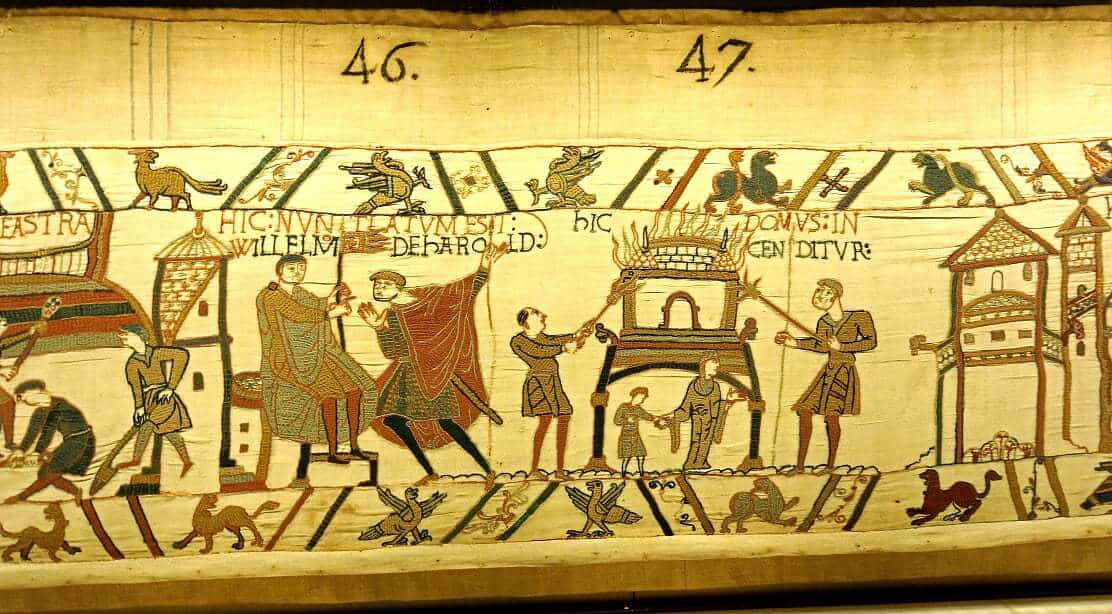 As a prime example of how women have been given little or no part in the story of the Norman Conquest, out of 626 human figures, there are only three women who appear in the main narrative of the Bayeux Tapestry. One of these is easily identifiable as Edward the Confessor’s queen, Edith of Wessex, attending her husband on his deathbed. Another scene, as the Normans land on the shores of England, shows a woman and her child fleeing from a burning house, set alight by the invaders. The most intriguing woman in the Bayeux Tapestry, appears in one scene when Harold is in Normandy. She is identified as ‘Ælfgyva’, the name sewn into the tapestry above her head. However, the scene does not appear to be related in any way to the scenes either before or after, and has therefore caused much discussion and theorising among historians. 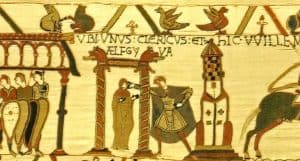 Ælfgyva appears to be in a doorway, possibly as a suggestion that she was indoors, with a priest touching her cheek. Whether the touch is in admonishment or blessing is open to interpretation, some take it is a collaboration of some sort between the two. The full inscription above the scene is, in itself, either incomplete or deliberately ambiguous. Written in Latin as Ubi unus clericus et Ælfgyva, it simply reads ‘Here a certain cleric and Ælfgyva’. The phrase in itself is an anomaly, and the only incidence of an incomplete phrase in the tapestry. It does not identify the priest, nor the context in which the two are together. In the borders, at Ælfgyva’s feet, is a naked man, imitating the stance of the cleric, perhaps placed there to indicate some kind of scandal associated with the lady. Ælfgyva appears to be well dressed and, given that she is one of very few women in the whole tapestry, may well have been a lady of some significance. The name, Ælfgyva or a derivation such as Ælfgifu, was quite popular in the eleventh century, but could also be used to simply mean ‘noble lady’. As this is the only scene in the entire Bayeux Tapestry in which the woman is the leading character, and considering that she is only one of three women depicted in the entire embroidery, the story which is depicted must be of some significance to the story of the Norman Conquest.

The story of Ælfgyva raises several questions. Who is she? What is the story that the tapestry is trying to relate? Why is that story so important to the events to merit inclusion in the Bayeux Tapestry? Unfortunately, we are not without a substantial number of potential candidates who could be identified as Ælfgyva because Ælfgyva and its variants, Ælfgiva, Ælfgyfu, Ælfgifu and Elgiva, were popular names in England in the eleventh century; indeed, Emma of Normandy’s name was changed to Ælfgifu on her marriage to Æthelred and, just to make matters more confusing, the first wives  of each of her husbands, Æthelred and King Cnut, were also called Ælfgifu. Many historians have their own favourite theories for the identity of Ælfgyva; the numerous possible candidates include Emma herself, a sister of King Harold and the first, handfast wife of King Cnut, as well as a nun kidnapped by King Farold’s brother, Sweyn. Each possibility comes with her own reasons for being the mysterious Ælfgyva, and her own claim for inclusion in the tapestry that tells the story of the Norman Conquest.

However, as I discovered, not one woman fits the bill perfectly. Which is what makes the story so intriguing…. Who was she?

Thank you Sharon, most intriguing. This lady has grabbed the imagination of other writers as well. I guess we will never know for sure who she was, no matter that someone tried to “out” her by sewing her into the tapestry! 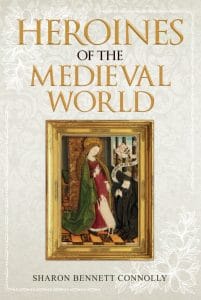 Sharon Bennett Connolly has had a lifelong fascination with history. She has studied academically and just for fun – and even worked as a tour guide at historical sites, including Conisbrough Castle. Born in Yorkshire, she studied at University in Northampton before working in Customer Service roles at Disneyland in Paris and Eurostar in London.
She is now having great fun, passing on her love of the past to her son, hunting dragons through Medieval castles or exploring the hidden alcoves of Tudor Manor Houses.

Sharon started researching and writing about the lesser-known stories and people from European history, the stories that have always fascinated. Quite by accident, she started focusing on medieval women and made them the focus of her popular blog. In 2016 she was given the opportunity to write her first non-fiction book, Heroines of the Medieval World, which will be coming out in paperback in 2019. Sharon has just published her second non-fiction book, Silk and the Sword: The Women of the Norman Conquest, and is now working on a third, Ladies of Magna Carta.