For many years the presence of a lady known as Ælfgyva on the Bayeux Tapestry has baffled historians. No one knows who she is or why she is depicted on the tapestry. Today’s guest, Paula Lofting, spends most of her free time researching the 11th century (and writing great books set in the period). She has her own theories as to who the mystery lady was. I suggest you sit back and enjoy the ride as Paula guides you through this rather convoluted story!

There was a plethora of women called Ælfgyva/Ælfgifu amongst the women of 11th century England. King Cnut’s first consort and the mother of his sons, Harald and Swein, was known as Ælfgifu of Northampton. Her father, Ælfhelm, had been executed and her brothers blinded during Aethelred’s reign, so her hatred of the ‘unready’ king must have made it easy for Cnut to win her, and her relatives, over.
Cnut wasn’t content to have one woman. No, he had to have two. Greedy chap, I hear you say. Well, it was fashionable to have an official wife and a handfasted wife. For the sake of continuity, Cnut decided to hook up with King Æthelred’s widow, Emma of Normandy, who’d been forced to change her name on marriage to Æthelred and be known as, – yes, you’ve got it – Ælfgifu. Emma, however, seems to have preferred her own name, and to avoid confusion as we go on, I’ll refer to her as Emma, no matter what her Anglo-Saxon name was.
The Ælfgifu on the Bayeux Tapestry appears in one scene where it says, Here Ælfgyva and a cleric. In the scene, the priest, or monk, is touching her face, signifying a collaboration with her. But it isn’t the priest that draws the eye: it’s the two naked men at the bottom. Question is, who is this Ælfgifu?

Having made studies of the various primary and secondary sources, I believe that the woman on the Tapestry is Ælfgifu of Northampton, as J Bard McNulty (1980) first identified her. Why do I believe this? Because Ælfgifu of Northampton became the subject of a scandal when she was accused of presenting Cnut with two sons that were neither his nor hers. One was rumoured to be the son of a workman and a serving maid and the other, the son of a priest and the same serving maid – or maybe Ælfgifu herself.
In the Tapestry scene featuring Ælfgifu the pictures at the bottom depict a naked workman with a monkish style haircut, his genitals exposed as he works with a hammer and wood. In the next scene, the naked man mirrors the stance of the cleric who is touching her face. The scene comes just after a scene depicting Harold and William meeting, and maybe it is there to illustrate what the two men talked about, namely an old scandal involving a royal consort and a priest. Whatever the case, it is the only scene of its kind in the tapestry.
Whether there is any truth to the scandal, around 1030 Cnut sent Ælfgifu with their son Swein to Norway to govern on Cnut’s behalf. This may have been to keep her out of Emma’s way. No doubt the two women would have been directly at odds with each other. After all, Emma agreed to marry Cnut on the surety that her children with him would take precedence over Ælfgifu’s in the succession.
Ælfgifu’s heavy-handed taxation did not endear her to the Norwegians. She and Swein were ousted after some years. Nothing more was heard about her after 1040 and it is thought that she had died in Denmark after her son Swein.
Not everyone agrees with the above interpretation. Historian Eric Freeman states that he believes, owing to a 14th century legend, that Emma of Normandy is the woman being portrayed disgracefully on the Tapestry. I am unsure as to how and why a 11th century scandal may have only emerged in the 14thcentury, but whatever the case, it goes thus:
Edward, the king, believing that his mother had entered into sexual relations with a Bishop Ælfwine, (or a Bishop Stigand) sent her into a monastery and had the bishop locked up. Shown in a heroic light, Emma offered to prove the Bishop’s innocence by ordeal by hot iron, but Robert, the Bishop of London, threw more coal on the fire by announcing a list of her sins which included conspiring to murder her son, Alfred, and defaming her other son, Edward himself. Emma was ordered to undergo the ordeal and survived, the tale transforming into some sort of miraculous legend, with Edward begging forgiveness and mercy of her and restoring all that he had taken and more. There is no contemporary evidence for this strange story, beyond illustrating the strained relationship between Emma and her son.
Emma had always had a reasonably good relationship and reputation with the English whilst she was wed to Cnut. In Normandy, however, her reputation was sullied by her second marriage. After all, she put aside her sons from her marriage to Æthelred (a marriage arranged by her brother, the duke of Normandy) and abandoned them in Normandy, dissolving any Norman ambition of future successions to the English crown.
Then Cnut died. Emma’s reputation and power did not suffer overmuch—at least not while her son by Cnut, Harthacnut, was king. But when her son by Æthelred, Edward, succeeded to the throne, things changed. Unsurprisingly, Edward’s view of her was coloured by her abandonment of him in his adolescent years for a man who essentially caused the downfall of his father. Edward removed all Emma’s wealth and assets and basically told her to stop prying in England’s affairs and lead a quiet life in Winchester. Emma seems to have done so, right up until she died in 1052. No indications of a passionate affair with a bishop, no detailed account of an ordeal by hot iron, just an older abandoned woman living out what remained of her life.
There is another reason to discount Emma as the scandalous Ælfgifu on the Tapestry: her great-nephew William of Normandy. His claim on the English crown was tenuous at best and depended entirely on his kinship—via Emma—with King Edward. Therefore, with Emma being integral to William’s claim to the crown, it would hardly seem a good idea to represent her on the Tapestry in this way. William was already a bastard; he needed all the ‘decency’ in his backstory he could get.
William had no relationship with Ælfgifu of Northampton. She was not a person whom he would have greatly regarded, so the embroiderers would not have worried too much about stitching her and her clerical (potential) lover onto the tapestry.  Due to the lack of info stitched onto the tapestry regarding the scene, it seems this was a well-known scandal of the day. In other words, it was anecdotal to the time and it fits far better than the story of Emma.
In conclusion, I have no doubt that the mystery lady on the Bayeaux Tapestry is Ælfgifu of Northampton—but that does not mean we should necessarily assume she was involved in a scandal. After all, gossip back then was probably as vicious as it can be now!
**************************
Thank you for that, Paula! Now, as I stated already at the beginning, Paula’s love of the 11th century isn’t restricted to researching the period – she also writes. So far, she has published two books about Wulfhere of Horstede and his complicated life in which marital issues, war and an infected blood-feud figure prominently.  I have recently read the second book in her series, The Wolf Banner, and this is my review: 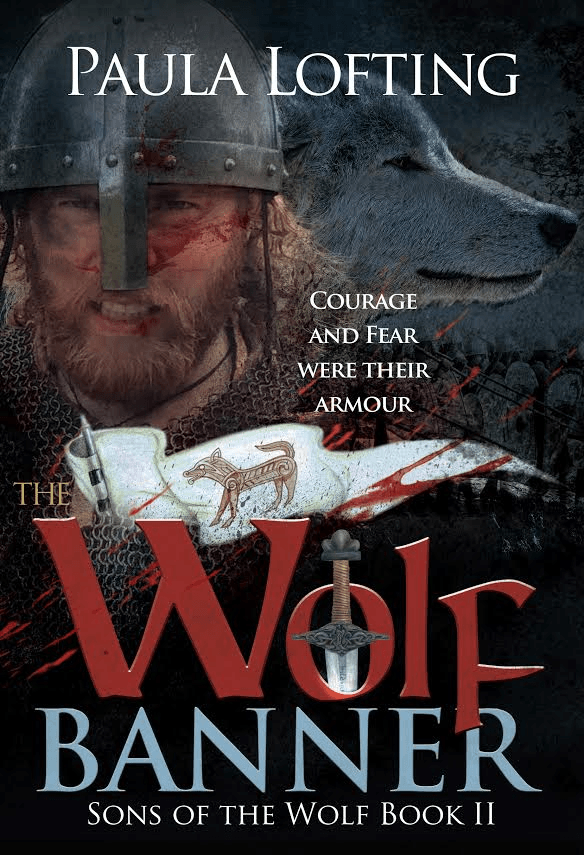 There are a couple of things that are very apparent when reading Ms Lofting’s The Wolf Banner: the author knows her history inside out and the author loves her chosen period. This results in a vibrant historical setting, little details of everyday life blending together to create quite the time travelling experience. While reading Ms Lofting’s book I am transported to the 11th century, walking side by side with her characters.
Further to the setting, Ms Lofting adds a well-developed plot and an interesting cast of characters. Not all of these characters are likeable – notably Wulfhere’s wife Ealdgytha is very difficult for me to warm towards, no matter that the woman has her fair share of woes – but then that is how it is in real life as well. The protagonist is Wulfhere, thane of Horstede and sworn to serve King Edward the Confessor. Other than doing his duty by his lord Wulfhere has a somewhat infected situation at home and a bitter feud with his nearest neighbour to handle. Plus there are all his children, from his eldest daughter Freyda to Tovi, the son who is treated like an enervating afterthought by both his parents.
Ms Lofting does an excellent job with Tovi who very quickly grows into the character I care the most about. Some scenes involving this young boy and his parents are quite heart-breaking, and I can only hope we will see more of Tovi as the story progresses.
The personal lives of Wulhere and his family are interwoven with the political events of the times. King Edward, Harold Godwinson, the Welsh king Gryffud ap Llywellyn, the ever-present Danes – they all affect the narrative, culminating in vivid—I would even say excellent—battle scenes with Wulfhere in the thick of things.
The Wolf Banner is a sequel to Sons of the Wolf and to fully enjoy it I recommend the reader starts at the beginning. Likewise, The Wolf Banner does not conclude all the stories begun in it. For that we must await the next instalments of the saga.
At times, I feel the novel would have benefited from some abbreviation—this is a very long book and some pruning would, in my opinion, have enhanced the narrative. But this is a minor quibble: all in all The Wolf Banner is a gripping read, offering quite the insight into pre-Conquest England.
About the Author: 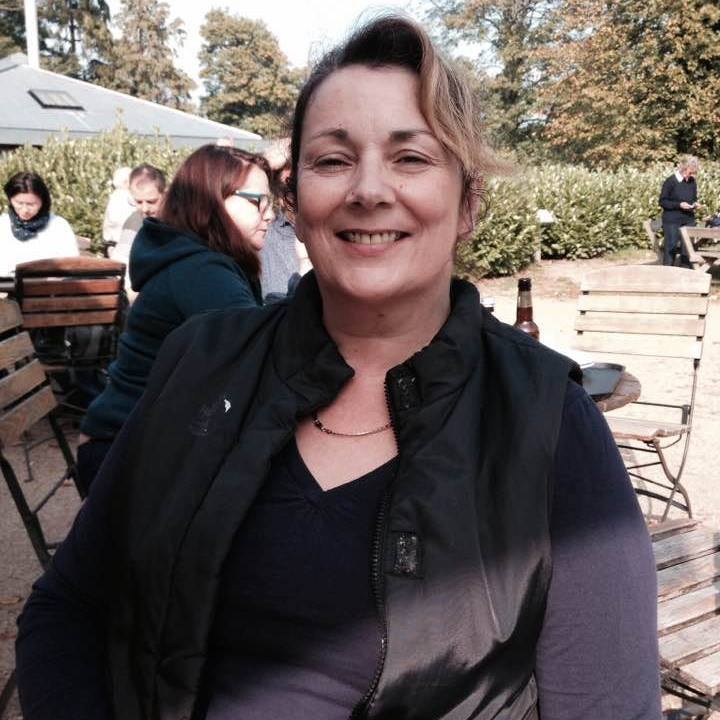 Writing has always been a lifelong ambition for Paula. A prolific reader, she loved to spend weekends buried in a book. Earliest influences such as Rosemary Sutcliffe, Leon Garfield, Charles Dickens, inspired an interest in history and a longing to write historical fiction. However, this ambition was reluctantly put on hold due to life events.
Her début novel, Sons of the Wolf eventually materialised, followed by the sequel, The Wolf Banner. These are stories set in the years leading up to the Norman Conquest of England. She is now working on Book 3 in the series, Wolf’s Bane.
History is a great love of hers and her interest in the subject goes beyond that of the keyboard. She also enjoys Anglo-Saxon re-enactment with Regia Anglorum, also a great source of research for her writing.
Twitter – @paulalofting
Facebook – https://www.facebook.com/Paula-Lofting-Author-Page-436306319727806/
Paula’s books can be found on Amazon!

2 thoughts on “Ælfgyva, The Mystery Lady of The Bayeux Tapestry”