In early September of 1312, Fernando IV of Castile died alone. Medieval kings were rarely alone. Even when they slept, there tended to be someone close at hand, sleeping on a pallet or standing guard. Not so in the case of our Fernando.

Even more suspiciously, Fernando was a young man in his prime. All of twenty-six, he was a vigorous ruler who expended as much energy as his predecessors on the ongoing Reconquista, always on the move through his extended kingdom, always preparing for one fight or another with those nefarious Moors.

So why did this young king die? Well, dear peeps, you’ll have to wait a bit for that. Let us instead get to know Fernando a bit first.

Fernando was born a year or so into his father’s reign. Sancho IV succeeded his father, Alfonso X, in 1284. Not something everyone was happy with, as Sancho thereby usurped the rights of his nephew, Alfonso la Cerda.
“Nonsense,” Sancho likely said. “Castile needs a man as its king, not a puny lad.” Many agreed with him—according to ancient Castilian law, the crown did not automatically pass from eldest son to eldest son. Sancho’s father, however, had worked very hard to implement new laws, according to which primogeniture was a given.

Sancho was a capable leader. When his elder brother, Fernando la Cerda, died, he put himself forward as heir to the crown. Many of the nobles who were less than enchanted with Alfonso X saw an opportunity to get at their king by supporting Sancho. For a while there, Castile was afflicted by something akin to civil war. Alfonso did some dithering: first he expressed his support for Sancho’s claims, then he had a change of heart and loudly defended his grandson’s rights, probably because Alfonso’s wife, Violante of Aragon, insisted he do so.

When Alfonso X died, his grandson was all of 14. Sancho was twenty-six and a proven warrior. And while Alfonso Jr (I know, I know: too many Alfonsos…)  had his somewhat impressive grandmother in his corner, Sancho had the rather amazing Maria de la Molina as his wife. Plus, he had the support of several of the key Castilian nobles. This did not mean Sancho had an easy time of it. Effectively, he was fighting one battle or the other throughout his reign and then he managed to contract tuberculosis and died in 1295 at the young age of thirty-seven.

Which is how Fernando IV became king at the age of ten. Now, of course, the situation was somewhat reversed. Fernando was the weak boy-king, his cousin, Alfonso la Cerda, was twenty-five. Once again, the person riding to the rescue was Maria de la Molina. Through a combination of bribery, intelligence, wedding alliances and everything else in between, Maria managed to keep her son on the throne. Yes, there was a moment there when Fernando’s uncle, Infante Juan, was crowned king of substantial parts of Fernando’s kingdom. At one point, Alfonso la Cerda was proclaimed king of Castile. But Maria somehow navigated her way through one crisis after the other, battling the enmity of her brother-in-law, of the old Infante Enrique who was a brother of Alfonso X and therefore (in his opinion) entitled to a mayor say-so in how things should be run. Maria was smart enough to give Enrique a say, thereby legitimising her son’s position.

Many of the Castilian nobles disliked the strong relationship between their young king and his mother, and poor Maria was accused of stealing money from the royal coffers (proved false) of giving away the jewels her husband had given her (nope), of planning to always keep her son under her thumb. Fernando was young and impressionable, and for a while there he distanced himself from his mother, probably causing her quite the broken heart. But Maria, wise woman that she was, allowed her actions to speak for herself, and soon enough Fernando realised that his staunchest supporter and best advisor was none other than his Mamá. His Mamá, however, was tired and when things finally seemed to settle down, she retired, leaving Fernando to cope on his own.

Fernando was not an inept king. He doesn’t exactly stick out as a great king either, but he managed well enough and during his reign some of the deep wounds caused by daddy Sancho and his usurpation were somewhat healed.

In 1302, he married Constanza of Portugal—an alliance brokered by Maria to buy her son peace on his western border. He was seventeen, she was thirteen. I have no idea if theirs was a happy marriage, but in 1307 there was a daughter, followed by another daughter and then, in 1311, by the much desired son, the future Alfonso XI.

And so, we now come to the legends surrounding Fernando’s death. Like most medieval monarchs, Fernando’s life was somewhat nomadic. One day here, the other there, and one day in 1312 he rode into the town of Palencia. He was met by a group of very upset elders. They had terrible news for their king: the king’s privado (a man high in the king’s confidence) Juan de Benavides, had been murdered. And no, this was not a deed performed by your normal run-of-the-mill murderer. Oh, no: these rascals were belted knights, members of the Order of Calatrava, and yet they had slaughtered the defenceless Juan.

“Who?” said the king. The elders hastened to inform him the criminals were Pedro and Juan Carvajal.

The king was determined to find the nefarious brothers. One day, when he was in Jaén, he was informed that the brothers were in nearby Martos. Early in August, the king rode into Martos where the brothers were hauled before him. They denied everything. Well, they would, I suppose. Thing was, there was no real proof except for those sightings in Palencia, and those could not really be considered as conclusive. Fernando, however, had no reason to listen to the brothers: a close friend was dead and here before him stood the two bastards responsible for killing him. Except, of course, that Pedro and Juan loudly insisted they were innocent and had nothing to do with the unfortunate death of Benavides.
“I swear on everything holy,” one of them may have said. “I tell you, my king, I did not do this!”
Those pleas fell on deaf ears. No matter their protestations, the Carvajal brothers were found guilty by the king. True, there was no real evidence, but the accusations of the Palencia elders was good enough for Fernando. Justice had to be served. Now. The Carvajal brothers threw themselves before the king and pleaded. They begged. They repeated ad nauseam that they were innocent. Fernando just shrugged and ordered them killed.

There are various versions of how the Carvajal brothers met their death. The most lurid (and common) one has the poor men being stuffed into a small, circular cage adorned with long and sharp metal spikes on the inside. Said contraption was then bounced down a nearby hillside causing a gory and gruesome death. Ouch. Other versions don’t specify how they died, just that they died.

All versions agree on one thing: as the brothers were led away to their imminent death, one of them pointed at the king and cursed him, telling him that God was his witness that he had done nothing wrong and if the king went through with this, then God would summon the king to stand before Him in exactly thirty days.

Oops. A silence swept through the assembled men. Fernando was probably quivering with rage: to threaten a medieval king was not a smart thing to do. So he sneered and told the Carvajals they’d be spending eternity in hell and had his soldiers proceed with the execution.

The king went on his merry way, doing his best to laugh off the unease Carvajal’s curse had caused. One week passed. Another. I bet Fernando was keeping close track of the days, even if he pretended not to. A third week passed.  The fourth week, and the king was in the best of health. He began to relax. It had all been the words of a desperate, evil man, trying to sway the king to save his worthless life. On the thirtieth day, the king decided to ride over to join his brother in one of the endless skirmishes against the Moors. But first he ate and then he retired for a little siesta. Alone. Some hours later, when his squires came in to wake him they found him dead…

Fernando has gone down in history as Fernando el Emplazado, Fernando the Summoned. How he died, we don’t know. Nor do we know if he did, in fact, end up cowering before the throne of God. But his contemporaries took this as a sign from above that the Carvajal brothers had been innocent, and whether one believes in the hereafter or not, his death thirty days after the execution is quite the coincidence. Or maybe a medieval spin-doctor got hold of the two stories and twisted them into this legend of innocence, dire death and divine retribution. 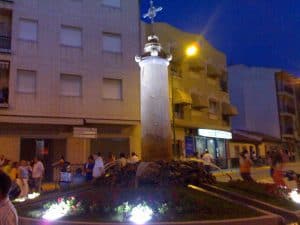 The spot where the cage holding the by then very dead Carvajal brothers ended up after bouncing down the steep hillside was adorned by the people of Martos with a huge pillar crowned by a cross. It is called La Cruz del Lloro (the cross of weeping) and it is still around, albeit in surroundings that look less than medieval.

With Fernando dead, Castile was yet again in the unenviable position of having a boy-king, Alfonso XI. Reluctantly, Maria de la Molina overcame her grief over the loss of her eldest son and emerged from retirement to yet again help rule a kingdom. 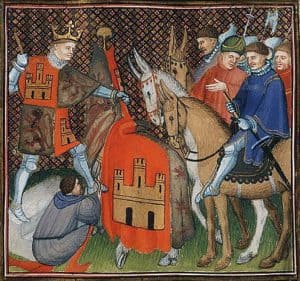 In the fullness of time, Alfonso XI would become a powerful king. He also managed to leave behind quite the marital mess: married to one woman, he lived with another for most of his life, fathering a litter of royal bastards. One of those bastards would one day kill his half-brother and take the crown for himself. I swear, who needs Game of Thrones when all you have to do is to open a history book or two to find stories just as juicy, just as bloody?

1 thought on “The mysterious death of a summoned king”