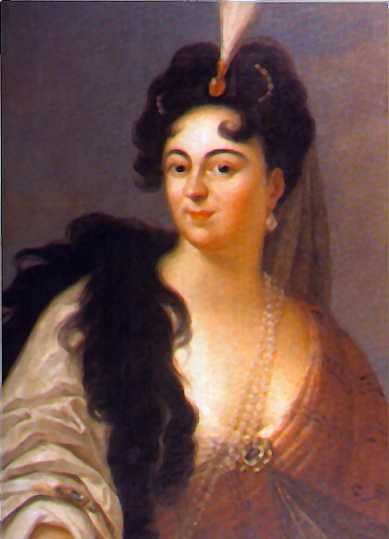 … and no, this is not  a post about returning light. Seeing as us Scandinavians are already experiencing how our days are growing shorter, I am simply not in the mood. Instead, I aim to introduce you to Aurora von Königsmarck, one of the first documented examples of female Swedish sin.

Aurora, apparently, was drop dead gorgeous. With black hair, black eyes that shone with “fire and passion”, perfect teeth and skin as smooth and white as alabaster, one could think her Snow White’s sister. Nor was our Aurora shy: when the occasion required it, she would gladly dress up as a Greek goddess and swan around with one perfect breast openly displayed – all in the name of art, of course.

Born in 1662, our little Aurora was in no hurry to wed. In fact, thirty-two years on she was still merrily unattached – if not inexperienced – and kept a long line of suitors ranging from the tender age of seventeen to the somewhat more staid age of sixty, jumping through hoops. In 1694, being thirty-two and unwed was more or less the equivalent of a social disaster, but this does not seem to have bothered Aurora much – or her family.

And talking of her family, Aurora was not the only Swedish sinner among her siblings. Oh,no, she had a handsome brother, Philip von Königsmarck, who is famous for three things. First, he was the lover of Sophia Dorothea, wife to the future George I of England, mother to the future George II. Secondly, the man had a major romantic streak, and so he saved all the letters between himself and his mistress, a huge collection of passionate writing and passed them on to his sister (yup; Aurora) for safekeeping, which is why they still exist. Third, the man went up in smoke one night, propitiously just as he and Sophia Dorothea were planning how to somehow get around the irritating obstacle of her husband. (Sophia Dorothea wanted nothing so much as divorcing her husband – a lecherous type – so lecherous that poor Sophia Dorothea once came upon him in bed with his mistress while his newborn daughter was fast asleep in the same bed) Anyway; one moment Philip was there, the other he was not, gone up in smoke, some would say…(Others would suggest George had something to do with his disappearance) Poor Sophia Dorothea got the divorce she’d desired to start anew with Philip – but at the price of her freedom. She was kept under lock and key until she died.

Back to Aurora, who, I am sure, took the whole matter regarding her brother badly. They were obviously close – why else send her all those letters? – and they also shared a propensity for sleeping with people not their spouses. Aurora suspected her brother had been murdered – a logical conclusion, given that George of Hanover did not take kindly to being cuckolded, no matter how unfaithful he himself was –  and she chose to enlist the help of a man whose exploits in bed would make her seem like a mere amateur. Enter Fredrik Augustus of Saxony – soon to be Augustus the Strong, King of Poland –  lebesman extraordinaire and more than willing to come to Aurora’s aid. Once he saw this voluptuous (if somewhat overage) Swedish cherub , his heart burst into a gallop.

Augustus and Aurora’s brother had spent several months in their youth together, sowing wild oats and in general enjoying the good life a rich young man was entitled to back then. Augustus was a veritable Don Juan, and it is said that he had more than 365 mistresses during his life, and well over sixty children from these liasons, even if he only acknowledged a handful of them.

Anyway: love was in the air, as they say, that enchanted evening when Augustus clapped eyes on Aurora. While he may have been enlisted by Aurora to help clear up Philip’s disappearance, this very quickly became his – and her – secondary concern. He was eight years younger and recently married. She compensated with her come-hither eyes and a sultry inviting manner that set his blood aflame. But Aurora was not a one-night-stand proposition, oh no, the lady expected to be wooed, and  Augustus went at this new challenge with everything he had. Balls, hunts, little picnics, more balls, jewel-encrusted clothes – he did it all, and finally his lady succumbed, allowing him, so to say, to climb aboard.

Oh joy!  Augustus did cartwheels, he had an entire house prepared for Aurora in Dresden – conveniently close at hand to the palace. His wife and mother did not seem to mind – and to give Aurora her due, she went out of her way to befriend Augustus’ wife and even chided her lover for being remiss in marital matters. Maybe she now and then needed to catch up on her beauty sleep…

It is said Augustus had her bed hung in silks dyed the colours of a rose-tinted dawn. He couldn’t get enough of his sloe-eyed nymph – no doubt attracted not only be her physical attributes but also by her wit. Aurora was a well-educated lady, fully capable of holding her own in any intellectual conversation. She was also, apparently, more fertile than anyone had assumed, and in 1696 she gave birth to a son, Maurice (Moritz), one of the few of his numerous illegitimate children that Augustus ever acknowledged. At the same time,  Augustus’s wife also gave birth to a son, so it would seem Augustus followed his mistress’ advice and gave his wife the joyful experience of his intimate presence on occasion.

At 34, Aurora’s charms were somewhat dimmer – plus she’d been recently delivered of a son. Augustus was not the constant type, and soon his roving eye found other women to woo and win. Not that Aurora seems to have borne him any ill will – and he was gentleman enough to make provisions for her upkeep. Their son he raised as he saw fit, and little Maurice spent most of his time in close proximity to his father’s court. Aurora had no choice but to comply – and besides, she wanted the best for her son. (Maurice went on to make a very good life for himself as a military man, and several decades later, his descendant Aurora Dupin would become a well-known author under the pseudonym George Sand)

In difference to one of Augustus’ future mistresses, the most unhappy Constantia von Brockdorff, Aurora was pragmatic enough to accept that her relationship with Augustus was over and arrange her future life without him. Constantia, on the other hand, did not. But her very sad story will be the subject of a future post – that much, at least, Constantia deserves.

Back to Aurora, who spent her remaining days as some sort of laywoman abbess for the Quedlinburg abbey. Not that she lived there much, her time mostly divided between Berlin and Dresden, where now and then she’d share a glass of wine or two with her former lover – maybe even a flirty look or two – while bantering with him about the headaches all his future mistresses cost him. Did she ever regret not having married? I think not. Aurora was a free spirit, an adventurous soul who much preferred her freedom to security. In many ways, quite the modern woman, wasn’t she?