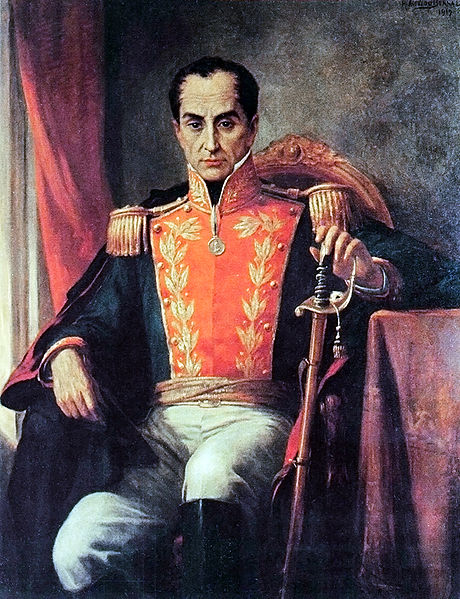 Ha! I can see you reading the title, a small crease between your brows. Spanish? Now what is she on about? Those among you who hail from Venezuela, will of course recognise the line as being from the National Anthem, glorifying the people and its leader who broke the yoke of colonialism, back in the early 19th century.

The leader at the time was Simón Bolívar, wealthy scion of one of the pure-blood criollo families in Venezuela. A criollo is a person who has undiluted Spanish – or at least European – blood in his/her veins. And for all that he led a revolution, Bolívar was no democrat in the modern sense – he wasn’t out to empower everyone to vote, after all women and other such weak-minded creatures were best kept at a fair distance from any influence on government. Don’t get me wrong; Bolívar liked – loved – women, but preferably in a horizontal position and definitely nowhere close to the offices of power. In particular, Bolívar loved Manuela Saenz – quite ironic as this particular lady was a most active participant in the revolution against Spain. Not that it helped; in Venezuela, women won the right to vote as late as 1946…

As we speak, the people of Venezuela have yet again risen against oppression. Ironically, the vociferous students, the opposition lead by Henrique Capriles, are protesting against “La Revolución Bolivariana”, which is how Hugo Chavez chose to label his democratic dictatorship, built on a flagrant populism liberally dosed with home-made socialism and quite the pinch of personal idolatry. Hugo Chavez had no problem with women voting – as long as they voted for him. He encouraged the disenfranchised to speak up for themselves (must be applauded), he spoke of education for everyone (yet again; applause) and along the way he strong-armed the Venezuelan constitution into extending the number of terms he could serve as president (bad, bad behaviour), he used his presidential powers to gag the opposition (tsk, tsk) and he eliminated all potential threats to his own power, thereby creating a following of sycophants with few original ideas of their own, and even fewer convictions.

So of course, when Chavez died, Venezuela was left in the hands of a less than competent government – that still went on talking about “La Revolución Bolivariana“. Let me tell you, dear old Simón must be spinning like a top in his grave at hearing his name so misused… There; done with the very abbreviated version of the background to the present situation in Venezuela. Let us instead return to that glorious leader, El Libertador, Simón Bolivar.

Simón Bolívar was a patrician, a well-educated rich young man who fell under the influence of the liberal ideas that flourished in the late 18th – early 19th century. Inspired by what had been done in the U.S., more and more of the South American criollos began thinking about breaking away from Spain, at the time a rather sick empire.

The Bolívar family was filthy rich. Seriously, seriously rich, with sugar plantations and gold mines, and more plantations, even more mines. The family empire depended on slave labour – as did most colonial enterprises at the time. The family could also count itself among Venezuela’s ancient families, having been in situ since the 16th century.

Little Simón, burdened with the full name of Simón José Antonio de la Santísima Trinidad Bolívar y Palacios Ponte y Blanco, was born in 1783, in Caracas. Quite a mouthful, those names; when I was/am very angry with my children, I call them by all their names. If Simón’s poor mother had tried the same, she’d have sprained her tongue – sadly, this was not going to be an issue for long, as she died when Simón was nine, thereby leaving the little boy an orphan. Simón’s father had died six years earlier.

Growing up, Simón only had one constant in his life, the slave Hipolita. After the death of his mother, a series of tutors were engaged to ensure he was properly schooled. One of these tutors, Simón Rodríquez, was to have a profound impact on his pupil, inculcating a fervent desire for freedom, for independence from under the Spanish yoke, in his young adept. So vociferous a proponent of revolution was Rodríguez that he was forced to flee Venezuela in 1797, and our adolescent hero was therefore enrolled in a military academy – probably in the vain hope of steering the misguided young man away from ideas of subversion and revolution. Didn’t work. But the years at the military academy gave Bolívar a strong grounding in military strategy, which was to come in useful in his later life. 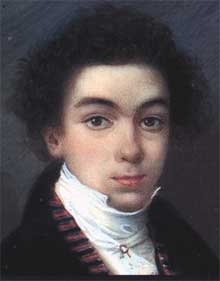 It wasn’t only the rich English aristocrats who did the Grand Tour back then. As a matter of course, Simón was dispatched to Europe somewhere in his late teens, and spent a number of heady years travelling the European continent. This was at the peak of  Napoleon’s career, and a wide-eyed Bolívar watched Napoleon’s coronation as emperor in Notredame. Did he dream of similar glories for himself? Probably.

In 1810, Venezuela took advantage of the political upheaval in Spain (Napoleon again. That man knew how to stir things up) and declared itself an independent country. Bolívar was sent off to England to request aid against an aggravated Spain – and to entice Francisco de Miranda to return to Venezuela as its first President. Not a very successful republic, this first attempt, and by 1813 Miranda was out of the picture, rather callously betrayed by Bolívar. Oops: I see some of my readers frown, not liking my depiction of their hero. Tough. Bolívar was a man who set himself goals and set out to achieve them. Such men always leave casualties along the way.

With Miranda in the hands of the Spanish, the Venezuelan republic teetered on the brink of extinction. Well, if we’re going to be correct, the republic was as dead as a door-nail, with Spain in control of all major cities and ports. And yet the fight went on. On the Spanish side, leaders such as Boves terrorised the opposition by murders, rape and pillage. So effective was this terror that in 1813 Bolívar  felt obliged to issued his decree of “War to Death”. Not at all a nice document, as it allowed for anyone of Spanish birth to be summarily killed unless he could prove he was collaborating with the rebels. Nice; now BOTH sides were using indiscriminate violence to intimidate the civilian population. But then, as Abimael Guzmán, leader of Sendero Luminoso, once said “A revoultion requires rivers of blood”. Or not, depending on your inclination… (Sendero Luminos was a marxist guerilla group that wreaked havoc in Perú during the 1980’s)

It would take until 1821 for Bolívar to rid his native land of its colonial oppressors. He won, he lost, he fled, he returned, he won again, and again. At the Battle of Boyacá, present day Colombia was liberated. At the battles of Carabobo and Pichincha, Ecuador and Venezuela were similarily liberated, and a new republic, Gran Colombia was formed, comprising all these states (Which is why, even today, Colombia, Ecuador and Venezuela have the same tricolor flags).

Bolívar was hailed, glory was heaped upon him, and he was accorded the title El Libertador (the liberator). He also became president of Gran Colombia, was active in supporting the freedom fighters further south on the continent, drafted the constitution of the country named after him, and in general was quite the busy bee. But, as we all know, popular opinion is a fickle thing, and the once so adored liberator was suddenly a much less admired president, accused of being far too power-hungry.

Gran Colombia was an unstable construction. So unstable, in fact, that Bolívar saw no option but to make himself dictator. Not a popular move, and had it not been for fair Manuela Saenz, who saved her lover in the nick of time, Bolívar would probably have been assassinated. As it was, he became disenchanted with all these ungrateful louts who demanded influence and power now, but who had not as much as lifted a finger to help during the revolutionary wars. In 1830 he resigned and prepared to leave for Europe. He was sick of strife, of “ploughing the seas” as he bitterly described his revolutionary efforts. Maybe he was hoping for some years of intellectual pursuits in civilised company, far from the heaving cauldron of passion and conflict that was his native land. If so,  he was to be disappointed. In December of 1830, Bolívar died of tuberculosis in Santa Marta, a rather nondescript village in northern Colombia.

Years later, his bodily remains were moved to Caracas. Centuries later, the remains of Manuela Saenz were interred beside his, a belated recognition to all those women who risked their lives together with their men in the revolutionary wars.

To end where I began, I believe Bolívar would, had he been alive today, been very upset at having his name linked with Hugo Chavez’ “revolution”. Neither President Maduro nor Hugo Chavez would have met with his approval, being far too uneducated, too unsophisticated for a man of Bolívar’s intellect (Yes, he was a snob – or a product of his age). And as to present day Venezuela, well, I think Bolívar might have sighed, wondering why on earth he bothered.

Gloria al bravo pueblo que el yugo lanzó, la ley respetando, la virtud y el honor.
May Venezuela, this country of so much beauty, so many natural riches, one day realise all its potential. May the people of Venezuela one day have the leaders they deserve and need, leaders who step away from opportunistic populism and settle down to create a country that lives up to that first line in the National Anthem, a country that respects law, virtue and honor. One can always hope.