Our lives are defined by relationships: parents, siblings, spouses/partners, children – they all affect who we are and how we evolve. As do friends. My BFF once gave me a magnet which says “Friends are the family we choose ourselves”, and while I am (mostly) quite happy with the family I have, she does have a point. My friends and I have other things in common than blood ties. My friends share my passions and interests, fully comprehend my obsession with words and do not look bored stiff when I eagerly recount a new little facet of medieval life I have just unearthed. 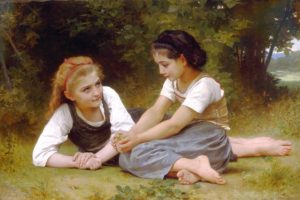 Thing is, though, the friends I have today are not the friends I had when I was twenty – well, with one or two notable exceptions. This is to some extent due to the fact that the person I am today is rather different from the bright-eyed, bushy-tailed young girl who was going to conquer the world and lay it at her feet. (Didn’t happen – and I don’t lose to much sleep over it…) More importantly, friends change because we lose people along the way. Sometimes we lose them because we take our eyes off the ball for an instant and when we look back the person is gone, having slipped off in a different direction than ours. Other times, we lose people because it hurts too much to hold on to them, and so, reluctantly, we must release our grip and watch them float away.

Once lost, these people are rarely found again, and for the rest of our lives there will be a scabbed wound in our hearts, reminding us of them, the people we once knew and now no longer do. Squandered opportunities, we might sigh, thinking that perennial “what if?”.

All of us have such bitter-sweet losses: the best friend in kindergarten, the boy you kissed while dancing to “Stairway to Heaven” (and wasn’t it wonderful, just how loooong that song was?) the girl (what was her name again?) that lent you that beautiful blue silk dress when you were going to that dance back in 1985. And then there was X, the man you were meant for, who tore your heart into shreds, who begged you to forgive – and you did, once, twice, thrice – before deciding to cut your losses and throw him out, even if it resulted in weeks sitting on your kitchen floor crying your eyes out.

At times it’s all quite random; in a rooftop bar in Paris you bump into a man, eyes meet, there’s a shadow of a smile and with a slight bow he moves over to his table, his group. A couple of seconds of connecting with this absolute stranger, and nothing more comes from it. A loss, of sorts, because it could have been different; that little smile could have become words, a shared bottle of champagne at the bar, and two hours later you would have felt as if you’d known Henri for ever.

Sometimes, the timing is off.  Take Stephen, the boy who had a huge crush on me when I was fourteen and who would have made an ideal partner had we met when we were seven years or so older. As it was, I was too young, too naive, and I hurt him.  His crush killed our friendship, but to this day, I think of Stephen Kitson and wonder what became of him and if he met someone who loved him as he deserved.  I had a best friend once who I lost due to a bitter quarrel over a stupid incident on the soccer field. Had we been older, we’d have worked it out, but as it was we were twelve and the days of cold silence that followed on that fateful match grew into a ten metre high wall of impenetrable ice. I still miss her, though.

Fortunately, just as we lose people we find them. I found one particular little gem twenty years ago, a fantastic friendship that grew out of something as inane as realising we both preferred tea to coffee.

My husband was a case of love at first sight – from my side, at least – during a university event. (It took me several months and a LOT of hard work to make him understand his own good and realise just how well matched we were) 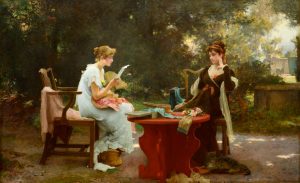 Making new friends requires making an effort. That digital acquaintance can bloom into something much, much stronger if you nurture it, invest time and attention it. It’s a bit like tending a delicate plant. If you want someone to care for you, you need to care for them. If you need someone to hold your hand when things get bad, you’d better practise your own hand-holding skills.

Over the last few years, I have been fortunate enough to upgrade quite a few of my virtual peeps to real friends. We may not meet up all that often, but we use social media to interact, we have tea sessions over internet in which we talk about the truly relevant stuff – you know, like life and Roman history and whether or not William the Conqueror really was that bad. (We disagree on the last one). Sometimes, we end up in heated debates about vaccines and abortion and politics in general, but because we’re friends, we can handle it. Friends don’t have to agree with each other all the time, but they must respect each other. Always.

Friendship is about giving. It is about helping the people you care about become better versions of themselves by being supportive and honest. It is about being there when things get rocky. It is about allowing ourselves to be vulnerable enough to open our heart to someone who might – inadvertently or not – one day hurt us. Mostly, our friends don’t hurt us. They enrichen us.

We never know for how long we are allowed to keep the people that matter to us. Circumstances may tear us apart, stupid misunderstandings balloon into irreconcilable differences, geographic distance can be quite the death knell in some cases. And all of us will at some point experience the pain of losing someone dear to death. 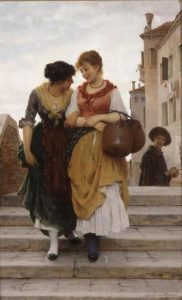 We lose some, we find some. And some of the people we lose we will miss until our dying breath, but being a resilient species we square our shoulders and carry on, finding joy in the new friends we make. Over time, even the painful losses acquire something of a golden sheen to them. At a distance of several years we are capable of remembering the good times rather than the bad ones, with advancing years and wisdom (well, in theory at least) you come to understand that X never meant to hurt you, not really.  And you can laugh a bit at yourself and stupid, stupid X, thereby finally healing that old wound you’ve been carrying around for years.

We lose some, we find some. That’s the way it is. But starting today, how about taking good care of the people you presently have? Tell them – at least once in a while – just how much they mean to you. Never, ever take them for granted. Friends must be cherished as the precious gifts they are.

We lose some we find some. But by extending an open hand to the people you meet on the way, you may find more than you lose!

4 thoughts on “Lost and Found – a reflection on friendship”