Today, I am hosting a stop in the ongoing Coffee Pot Book Club blogtour for Where The Gulls Fall Silent by Lelita Baldock. I must say I find the title very evocative: seeing as I live by the sea, I know that it would take quite the startling event to stop the gulls from their plaintive mewling, so obviously Ms Baldock’s protagonists are in for quite an adventure. I am also rather taken by the setting. I mean, Cornwall, peeps. Who doesn’t want to go to Cornwall – especially Cornwall in the 19th century?

Where The Gulls Fall Silent – Blurb 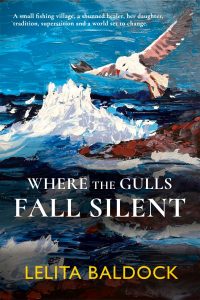 A small fishing village, a shunned healer, her daughter, tradition, superstition and a world set to change.

Kerensa lives with her mother, the healer Meliora, on the edge of a small fishing community on the Cornish Coast.
The townsfolk, who work the fish runs of pilchard and mackerel that make their way up the Atlantic coast, call on her mother for help with their ailments, but never for her company.
Kerensa does not know why.
Curses and superstitions whisper around her as she grows into a competent young woman, fighting for her place amongst the people of Porth Gwynn.
But what has caused the rift between her and the town?
And can their traditional way of life survive in the face of changing winds?

Where the Gulls Fall Silent is an historical fiction that explores the lives of the fishermen and women who made their living from the rough Atlantic Ocean; the hardship they faced; the secrets that divided them; and the community spirit that pulled them through.
A story of love, loss, hope and second chances.

To further tweak our interest, Ms Baldock has sent me this little excerpt, titled A Feast of Fish and Thyme

“Heave, two, three, four. Heave, two, three, four… keep up lads!” Kenver called the stroke as Rewan and his brothers streaked out across the bay, heading for the opening to the ocean beyond. Rewan bent to his task, pulling on his oars with all the pent up enthusiasm of his months away on the farms.

They’d come home early to prepare, after purchasing the new drift nets from a merchant at Padstow and had spent hours practicing with them in the bay. He and his father and crew had been so busy repairing the boats, sanding the hulls and repainting the wood to protect the beams from the whipping waves and rains that Rewan had had barely a moment to himself. Of course, time to himself was not essential when the person you dreamed about walked past your workplace every morning.

And every morning he’d been ready. As Kerensa strolled past, her right foot marking her distinctive shuffle, Rewan had made his way to the cobbled main street to intercept her path. First he brought smiles and good days, then thoughts on the weather and the coming season. Yesterday, confidence buoyed by the progress they were making in their use of the nets, and knowing they would soon launch out beyond the bay, he’d picked a bunch of wild flowers and fashioned them into a simple bouquet.

Kerensa walked past, head facing forward, wry smile touching her lips, she knew to expect him by now. Rewan approached, bouquet secured behind his back.
“Fine day my lady.”
“My lady indeed!” Kerensa had almost snorted, flashing him a smile both bewildered and joyous. She really didn’t see it, he realised, she didn’t see her beauty.
“You prefer I call you by your name then, Kerensa.” He lowered his voice, deep and soft as the sound of her name purred through his lips.
Her face turned scarlet, the smattering of freckles along her nose and cheeks lost in the reddened hue. He grinned.
“We are to sea tomorrow, out beyond the bay.”
Kerensa stopped dead in her tracks. “Beyond the bay? Into the sea?”
Surprised, Rewan cocked his head at her. “Why, yes. That’s what we’ve been preparing for all month. Why we came back sooner.” His lips quirked into his natural lopsided smile. “Me though, I came back for you.”
She didn’t laugh or demur, just stared straight at his face.
“Is it safe… beyond the bay? The seas are wild. The trading vessels are far larger than…’
“Hush,” Rewan laughed and brought the bouquet from behind his back, “For you.”
This time she startled, eyes fixed on the purple and yellow petals he’d spent his evening hours searching for.
Her lips pursed as if holding in a laugh. “They are lovely, Rewan. But… how long did the nettle bite burn? I have salves for that you know.”
His bravado dimmed slightly. How did she know he’d grabbed a handful of the infernal stinging herb in his search?
Seeing his discomfort, Kerensa quickly continued, “They are lovely, thank you.” And reached out to take them from his hand. As she did so her fingers brushed his. All thoughts of embarrassment vanished and, as if of their own accord, his fingers curled about hers, holding their hands together across the pretty flowers.
His lip quirked up, eyes shining bright and hot he leaned forward, “They are lovely, as are you.”
He struggled to contain the surge of desire that raced through his core as he watched her swallow, her throat bob up and down.
She pulled her hand away and placed the flowers within her basket. Tonight, when she returned from her daily forage, that basket would be filled with herbs and wild vegetables. He loved the smells of the land that trailed in her wake.
“To sea then,” she said, eyes looking over his shoulder towards the calm waters of the bay. “If I don’t see you before you set out tomorrow. Be… careful.”
“There is nothing to fear,” he announced bravely, almost believing his words. Leaning closer he brought his lips to her ear, “Do you think I would ever leave? I will always return for you.”
Their eyes met, locked for a moment, two. Then Rewan, eyes shining bright, turned and ran down the beach to his crew.

Now that crew were cresting the waves, making fast for the open water.
Rewan pulled hard on the oars, his limbs moving fluidly, his body poised and ready. His muscles worked powerfully but he barely registered the strain on his limbs, he knew only the excitement of the day, of the new adventure before him and his brothers.
They crossed the cliff heads.
Cardor gave a “Whoop!” of excitement and the brothers grinned as one.
“Slow it down boy!” Braneh’s cry echoed over the waves.
Kenver looked to Rewan for direction. The men grinned at each other.
“Keep pace boys,” Rewan cried, “Let’s show those old men what we’re made of! Make ‘em chase us!”
Eyes bright with mirth, Kenver called the strokes as they glided farther from the protected waters of the bay.

It was a bright clear day, the winds off the coast were moderate and warm, the sun and gulls high overhead. As they stroked farther from the bay the swell grew, but not by much. It was a perfect day to set out, but Rewan knew not all days would be so calm. He would have to talk to his father about the mast and sail designs the drift net merchant had told him of.Imagine the sea they could cover, the catches they could make if the wind powered them on!Shaking his head he brought his focus back to the moment.

Braneh and his crew were now in the open waters too. While Rewan loved the idea of continuing to outpace his father, this was not a race. The two boats were needed to stretch the net, moving through the water collecting the fish. He ordered Kenver to slow the stroke and their pace changed. Soon the two boats came into line.

Rewan looked over the water to his father. Braneh’s face was stern and focused, but when their eyes met across the water, Rewan saw it, the glow of adventure that matched his own. Nodding to each other they set the net then rowed out, pulling the cords taunt between them, before advancing on the school of pilchards the huer had spotted beyond the break. Rowing as one father and son guided their crews through the school of white-bellied fish, collecting them up and trapping them in their drift net, before hauling the nets up full to bursting with squirming, struggling bodies.
“Haha!” Carawon let out a whooping cry and then the men grinned to each other.
This was going to work.
********

Personally, I was rather taken by that scene with the flowers…

For those of you that just have to get your hands on Where The Gulls Fall Silent, here are the buy Links

It is also available on Kindle Unlimited. 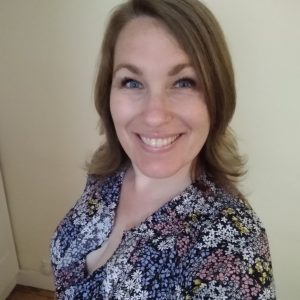 About the author: Lelita Baldock is an author of historical fiction and crime fiction. She has a passion for dark stories, with an unexpected twist. It was during her years studying English Literature at University that Lelita discovered her love of all things reading and writing. But it would be another 15 years before she would take up the challenge and write her own novel.

Her debut novel, the historical fiction Widow’s Lace, is an Amazon best-seller.

Her follow up, The Unsound Sister, saw her take a different direction in her writing, trying her hand at crime fiction and has been warmly received globally.

Her third novel, Where the Gulls Fall Silent, a traditional historical fiction set in mid-1800s Cornwall, is out now.

Lelita also runs a blog and newsletter featuring fellow authors and other creatives. 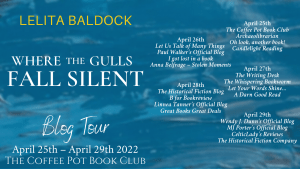 2 thoughts on “Where the Gulls Fall Silent – welcome to 19th century Cornwall!”