Since many years back, I am fortunate enough to call Helen Hollick a friend. She’s been a constant support in my writing journey, be it as a honest critic or as a shoulder to lean on. She has also made me wish I could wear a hat as rakishly as she does 🙂
Now, Helen isn’t “only” a friend. She is also teh author of several books, and while I have never been able to finish her  Harold the king (because I cry too much), I have inhaled my way through her fabulous books about pirate Jesamiah Acorne, one of those dashing, mouth-watering piratical types that would be more than welcome to anchor in my harbour (wink, wink) albeit that isn’t going to happen as he has lost his heart to the mysterious Tiola.

Last year, Helen told me she had a new release coming.
“Yay!” I said. “I need a Jesamiah fix!”
“Well,” Helen said, “it’s not a Jesamiah book. It’s a cosy mystery.”
“A what?” I asked, because to me, being Swedish, there are two literary phenomena I haven’t quite embraced: cosy mysteries and Christmas books (i.e. romance books set during the Xmas period. It is therefore sort of amusing that Helen’s second cosy mystery is set during Christmas)
Since then, I’ve read both of Helen’s cosy mysteries, and found them very enjoyable (but that does NOT preclude me being in serious need of more Jesamiah, Helen! Just sayin’…) Still, to me the leap from an 18th century ship’s deck to the 1970’s England seemed rather huge, so I decided to ask Helen to explain why she decided to explore a new genre. Helen, being Helen, said “Of course!” which is why I will now turn you over to her capable hands.

So Why Go Cosy?
By Helen Hollick 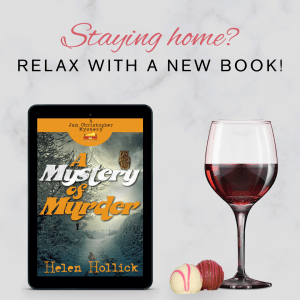 It’s freewheeling downhill for winter here in England (I guess elsewhere in the Northern Hemisphere as well?) The clocks have gone back an hour, it’s been raining a lot and it’s getting cold, so a cosy log fire (wood well dried for over a year because of climate change,) a glass or two of wine, box of chocs at hand to nibble… and, of course, a good book to curl up with.

The only problem with ‘good book’ is finding the sort you really want to read. Occasionally, you find a  good author and devour their work, but other times – zilch, can’t find what you’re looking for.

That happened to me when I wanted to read something that was similar to the first Pirates Of The Caribbean movie. Good fun adventure with a handsome, charismatic hero and a touch of adult fantasy. There was plenty of ‘straight’ nautical fiction to read, quite a few Young Adult fantasy novels as well, but nothing with the two combined for us grown ups (with adult content in other words.) So I decided to write my own. As you do. Sea Witch was the result. That one-off novel soon turned into a rather successful series, the next of which IS on its way. Honest. (Anna’s heartfelt comment: THANK GOD!!!)

The same thing happened with Cosy (Cozy for our US spellers) Mysteries. I read several really good ones (Debbie Young’s Sophie Sayers Mysteries to name but one series) but then couldn’t find much more to snuggle up with.

So, once again I decided to write my own. Not that I had any idea what to write or how to write it! Producing a quick-read cosy mystery was somewhat different from Historical Fiction and Piratical Adventures… Or was it? 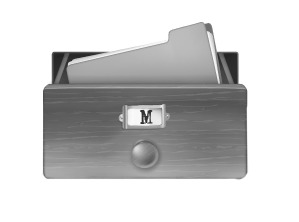 First thing I had to decide was when and where to set the series. I’d been toying with writing some sort of fiction based around my 12+ years of working as a library assistant back in North East London (where I lived before moving to Devon in 2013). Except libraries had very much changed since my days of being there in the 1970s – no digital filing; we had cardboard library tickets back then and drawers for index cards. All of which had to be sorted and filed (in order) by hand.

Hmm… what about setting the series in the 1970s then? Good idea!

On cue, my protagonist appeared from wherever pre-published characters live: Jan Christopher a shy, somewhat naïve young lady who wants to be a writer but finds herself working in the library after leaving school at sixteen. Her uncle is DCI Toby Christopher, and she is to meet DC Lawrence (Laurie) Walker … but will young love blossom, even when a murder disrupts their first date?

So that’s the story in a nutshell, interspersed with red herrings, of course, and a nostalgic trip back to the days before we had computers, the Internet, Facebook and mobile phones.

I used the real places  of the London Suburb of Chingford – including the library itself (which sadly is no longer a library, just offices.) So to follow Jan catching the bus or walking home from work is perfectly do-able, apart from the bus numbers have changed now, and I did alter the name of the road where the murder took place.

Oh, and that bit of the story is entirely made up! I have used several anecdotes from those library days but I assure you, I have never been involved with a murder – well, not outside of a good Agatha Christie novel, that is!

The nicest thing, though, is the feedback I have received for the first book A MIRROR MURDER. Several people emailed or messaged me to say how well they remembered the library, and even remembered me! (I assume because I was jolly and helpful. I don’t think I was a grump too often…)

I must stress that the book is not autobiographical – I’m actually nothing like Jan – but some of the ‘background incidents’ were real enough. Like the boy who wanted a book on copper knickers, and the ‘flasher’ in Epping Forest…

Episode 2 of the series is A MYSTERY OF MURDER. This time, Jan and Laurie are in Devon for Christmas. I’ve disguised my village and house a little, but other places I have openly used, even though I had to do quite a bit of research! Umberleigh Station is now a request (yes, you have to hold out your arm to stop the train,) but when did the station become ‘unmanned’? And where was the hospital and police station located back then?

I found the research to check these little details just as hard to undertake as I do for my sailing scenes or historical fiction. It’s surprising how many things you think you remember – but don’t!

As a similarity, Jan is also a wanna-be writer, and yes, like her I did pen a chapter or two while supposedly writing out overdue slips in the office. I got very adept at quickly hiding my notebooks… But the rest is fiction. Just fiction. 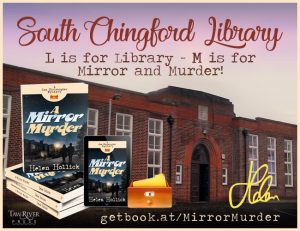 Thank you, Helen, for sharing the above with us! As I stated already at the beginning, I’ve read Helen’s cosy mysteries and enjoyed them – a lot. They’re the equivalent of snuggling up under a blanket with a cup of tea close at hand. So of you’re looking for that kind of read, check out the Jan Christopher Murder Mysteries!

A Mystery of Murder  http://mybook.to/AMysteryOfMurder 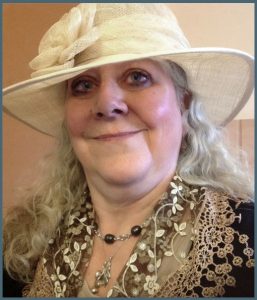 More information about Helen and all her other books you can find on her website or on Amazon: