Today, I am delighted to be hosting a stop on The Coffee Pot Book Club tour for Ms Bazos’ latest release, Rebel’s Knot. Some of you may recall that Cryssa Bazos has been my guest on this blog before, mainly because we share a passion for the 17th century – and LoTR! We also seem to share an affection for the history of Barbados, as both of us have set books in this location, albeit my protagonists visit later than Cryssa’s do.

Rebel’s Knot is Ms Bazos’ third novel, and like her two previous books, the story is set in the 1650s. Oliver Cromwell is in controll of England and Scotland and is determined to bring Ireland to its knees as well. We all know Cromwell succeeded, and most of us know that for many of the Irish the years that followed would be nightmarish. Before I leap into my review, here is the blurb: 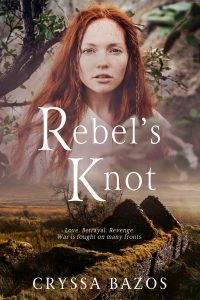 Ireland 1652: In the desperate, final days of the English invasion of Ireland . . .

A fey young woman, Áine Callaghan, is the sole survivor of an attack by English marauders. When Irish soldier Niall O’Coneill discovers his own kin slaughtered in the same massacre, he vows to hunt down the men responsible. He takes Áine under his protection and together they reach the safety of an encampment held by the Irish forces in Tipperary.

Hardly a safe haven, the camp is rife with danger and intrigue. Áine is a stranger with the old stories stirring on her tongue and rumours follow her everywhere. The English cut off support to the brigade, and a traitor undermines the Irish cause, turning Niall from hunter to hunted.

When someone from Áine’s past arrives, her secrets boil to the surface—and she must slay her demons once and for all.

As the web of violence and treachery grows, Áine and Niall find solace in each other’s arms—but can their love survive long-buried secrets and the darkness of vengeance?

So what did I think of Rebel’s Knot? Here’s my review:

The 17th century was not a good time for Ireland – not in the aftermath of the English Civil war, when Parliamentarian troops did their best to squash any royalist sympathies that might be lingering on the Emerald Isle. It quickly became a war of religion, with papist loyalist Irishmen taking up arms against the fiercely protestant English troops.

As always when war ravages a country, the heaviest price is paid by the innocent, by those who just try to survive. In Ms Bazos’ excellent opening chapters to Rebel’s Knot, she paints a vivid depiction of a military raid on a small manor, a raid that leaves everyone but one person dead or taken captive.

Áine Callaghan is the “lucky” girl who escaped the English marauders who descended on the manor where she worked as a dairy maid. Somewhat fey, very much given to keeping to herself, Áine is suddenly very alone in a dangerous world. Some days later, that changes when Niall O’Coneill comes riding down to the manor, hoping to visit briefly with his sister Mairead before re-joining his Irish loyalist regiment. But Mairead is gone, and instead he comes face to face with a terrified and somewhat fey redhead, a young woman he refuses to leave to fend for herself.

Niall is devastated by the disappearance of his sister, and Rebel’s Knot is very much shaped around his need to find out what had happened—and exact revenge. Meanwhile Áine struggles with surprisingly tender feelings for her saviour—not that she needed saving, or so she insists—and somehow keeping her secrets hidden from him. Things, as they say, will get quite complicated…

Ms Bazos presents us with a war-ravaged Ireland, a land where hope is in short supply and peace is more of a dream than a possibility. She doesn’t shy away from depicting the brutalities of the time or the vulnerability of women in this man’s world. Áine is no exception, but in Niall she has found a capable protector, even when whispers about her past and her potentially doubtful allegiances begin to spread.

It is easy to fall in love with Ms Bazos’ protagonists—Áine in particular is an intriguing blend of self-sufficiency and innocence, this despite harrowing experiences in her youth. But Niall and Áine do not stand alone, and Ms Bazos adds a colourful and well-depicted supporting cast, all the way from the impressive Eireen and her daughter Maude to Niall’s comrades in arms.

Rebel’s Knot is a well-written novel with a gripping and layered plotline. It’s one of those books you start to read and find yourself incapable of putting down, because you just have to read one more page. And another. And yet another… A truly addictive read, warmly recommended!

Cryssa Bazos is an award-winning historical fiction author and a seventeenth century enthusiast. Her debut novel, Traitor’s Knot is the Medalist winner of the 2017 New Apple Award for Historical Fiction, a finalist for the 2018 EPIC eBook Awards for Historical Romance. Her second novel, Severed Knot, is a B.R.A.G Medallion Honoree and a finalist for the 2019 Chaucer Award. Her third book in the standalone series, Rebel’s Knot, was published November 2021. 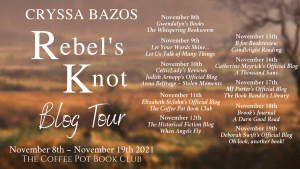