Today’s 17th century enthusiast and I have a lot in common. Like a fascination with LoTR (Lord of the Rings for those among you who do not share this affliction). In Cryssa’s case, this means she has a complete set of LoTR figurines – still in their original packaging. Her then young sons wanted to play with the miniature hobbits, elves, dwarves and whatnot’s, but Cryssa went all Gollum on them, hissing “my precioussss” before stowing them safely out of reach from young, eager hands.

We have more in common: we are both financial peeps. We have both invested time and effort in the Historical Novel Society. We both like our heroes to be men of integrity, men who survive whatever life throws at them through sheer grit and determination, even if they emerge somewhat scared. *sighs happily* We are also both of us rather taken by Charles II. Only one of us has a thing about Prince Rupert (guess who), but both of us have a fondness for Prince Maurice, Rupert’s younger brother who came to an untimely and unknown end while at sea.

Cryssa has so far published two books but is aiming to give us more of her excellent literary concoctions, a heady mix of action, political intrigue, honourable heroes and strong, “unfeisty” heroines. Me, I am rather happy with them being “unfeisty”. Cryssa’s ladies are realistic depictions of women handling lives within the confines imposed by society in their times. And speaking of times, let’s get things started by asking Cryssa just what it was that drew her to the 17th century to begin with.

Cryssa: This era is a watershed moment in history. It’s a time of social upheaval when traditional roles were challenged and people began to question their place in society. We find scientific advances, an explosion of literacy and a movement of people through colonization and exploration that forever changes our world. The seventeenth century is a conflict-rich era that is gold to the historical novelist.

Cryssa: I dare not mention Prince Rupert for fear of being banned from your blog. (Anna: Tut, tut, sweetie: you just did…) Seriously, I’ve always been fascinated with Charles II, in particular his daring escape from the Parliamentarians following his defeat at the Battle of Worcester. This episode demonstrates his resourcefulness, resilience, and ability to connect to all his subjects, even those on the lowest social rung. To evade Parliamentarian forces, who were combing the countryside for him, he disguised himself as a servant, hid in an oak tree, hung out at Stonehenge, and learned to pass himself off as a commoner. He had so many close shaves until, finally after six weeks, he found safe passage to France.  His adventures had the flavour of a thriller but were more incredible as they were real.  (Anna: As an aside, Cryssa knows A LOT about the battle of Worcester and its aftermath and has even been invited to give talks about it at the Commandery in Worcester)

Anna: So tell us a bit about your 17th century books. 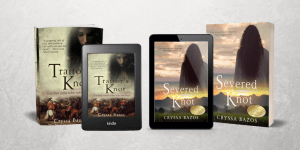 Cryssa: I’ve written two books about this era, Traitor’s Knot and Severed Knot. Traitor’s Knot takes place during the uncertain era between the execution of King Charles I and the start of the 3rd English Civil War. Elizabeth Seton is a young woman who has been shunned for family’s Royalist activities. In the midst of this new social order, she risks her life by sheltering fugitives from Parliament. To further complicate her life, she meets James Hart, a former Royalist officer turned highwayman, who preys on Parliamentarians in order to raise funds for the restoration of the king’s son. Their lives and love are in jeopardy once the war breaks out again.

The second novel, Severed Knot, is a standalone story and features one of the side characters from the first book. Set in 17th century Barbados, two prisoners of war, Mairead O’Coneill and Iain Johnstone, are forced into indentured servitude and transported to a sugar plantation. In the harshness of their new world, they discover passion in each other’s arms as they struggle to survive and escape from their captivity.  (Anna: I forgot that Cryssa and I share another thing: we both feature Colonial Barbados in our books. After researching the brutal slavery and the harsh conditions on the sugar plantations, somehow this Caribbean island no longer evokes rum and calypso… And Cryssa’s depictions of Iain’s and Mairead’s suffering on Barbados is so vivid it made my guts twist)

Anna: This is probably a stupid question, but are you planning on revisiting this time period?

Cryssa: Yes! I’m completely enthralled by the period. I have two more full length novels in the works (though the wheel is being turned by a pair of turtles). One takes place in Ireland during the Cromwellian invasion and the other brings us back to London with a spy thriller. I’ve been flirting with heading to Scotland as well to wrap up this standalone series. I’m also involved in a historical fiction anthology called Betrayal which comes out on November 17th. “Honour of Thieves” is a 17th century heist featuring a few of the characters from Traitor’s Knot and Warwick Castle. I had a great deal of fun writing that story.

Anna: Ah, yes! I think Betrayal will appeal to many #histfic readers, and who doesn’t love a good heist story? So, what are you working on right now?

Cryssa: I’m working on a project that started as a long “short” story, then grew to a novella before expanding to a full-length novel. Everyone who knows me laughs and rolls their eyes when I tell them. (Anna: Been there, done that…)Rebel’s Knot is set during the Cromwellian invasion of Ireland, in the final days of Irish resistance. It’s the story of an Irish Tory soldier avenging the destruction of his family and a vulnerable woman, torn from her home, who finds herself between two armies.

Like most of us history nerds, Cryssa has a tendency to disappear down the rabbit hole of research, often returning with the most interesting little nuggets. All this researching results in some excellent posts, like the ones below:

The Life of Indentured Servants in Colonial Barbados

Today, Cryssa is sharing an excerpt from Severed Knot 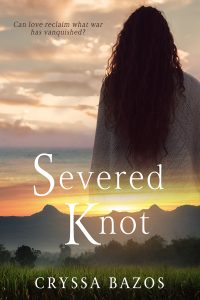 The Ayrshire lad lay mouldering in a corner for days before their English captors thought fit to drag him out. This proved to be the only way to get past their gaolers: a bloated body seeping blood and foam.

Iain Johnstone watched as the door shut, heard the bolt slide into place. The meagre light from the corridor extinguished. One hundred twenty-four days a prisoner of war. Deep in his marrow, he feared that he’d never see Scotland again.

His world was confined to a stone cell filled with his broken countrymen, a plague of rats, and the fetid stench of shite; his only nourishment a cup of thin ale and a few ounces of bread each day. This the reward for following Charles the Second into England to regain his lost throne. Fortune never favoured the invaders—unless they were Oliver Cromwell. If Iain’s mouth wasn’t parched and filled with sores, he’d spit on the ground.

“A pox on the damned curs,” Iain muttered to himself, and not for the first time. He leaned against a gnarled post, his muscles stiffened by the cold. His torn, hodden-grey cloak provided little warmth. Though a couple of braziers were positioned at either end of the cell, there never seemed to be enough coals to heat the room beyond a few feet. Iain alternated between stamping his feet and pacing a short loop until exhaustion defeated him. Those who rested on the stone floor succumbed the fastest to gaol fever, their battle-worn bodies claimed by damp and misery.

Once a battalion of proud men, they had been driven to London like a herd of cattle. Now each and every one of them waited for the cull. Daily their numbers shrank. In this cell alone, one hundred beaten men had dwindled down to fifty. Bouts of wheezing coughs and streams of bloody spittle eventually settled into deafening silence. With every loss, Iain found it harder to call out the names of the newly dead, but he forced himself to do it. He hoped when death finally claimed him, someone would be there to announce that Iain Locharbaidh Johnstone was on his way to join his ancestors.

A racking cough seized him, and he doubled over, chest burning while he gasped for breath. Damn it, his bones would not be buried in this shitten land. They belonged in the hills of his forefathers and buried beside his wife, not dumped into the common fields of his enemy. No worse fate for a Scotsman.
****

Severed Knot is available through Amazon, and Kobo, Nook, and Apple 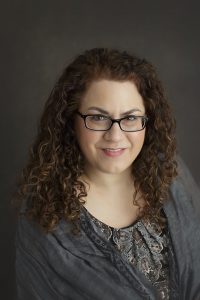 Cryssa Bazos is an award-winning historical fiction author and a seventeenth century enthusiast. Her debut novel, Traitor’s Knot, is the Medalist winner of the 2017 New Apple Award for Historical Fiction and a finalist for the 2018 EPIC eBook Awards for Historical Romance. Her second novel, Severed Knot, is a B.R.A.G. Medallion Honouree and a finalist for the 2019 Chaucer Award.

Well, that’s all for today, dear peeps. Check out Elizabeth’s post if you missed it last week. Stay tuned for Deborah Swift’s post next week!

11 thoughts on “Glory and Gore – meet Cryssa, a LoTR fan with a thing about Charles II”