Some weeks ago, I visited Birka.
Okay, so for many of you, the name does not lead to an immediate “Oh. Birka! I’d love to visit some day.”
Understandable, as Birka is nothing if not understated. In fact, stepping ashore the island Björkö in the Stockholm archipelago where Birka is located is more or less like stepping ashore on any small island in our part of the world: birches, water lapping at the shores adorned with stands of reeds, and an undulating landscape covered with grass. Hang on: very undulating landscape. Everywhere you look, you see grass-clad mounds.
“Graves,” our guide tells us, before adding that there are well over three thousand registered grave mounds on this little island. 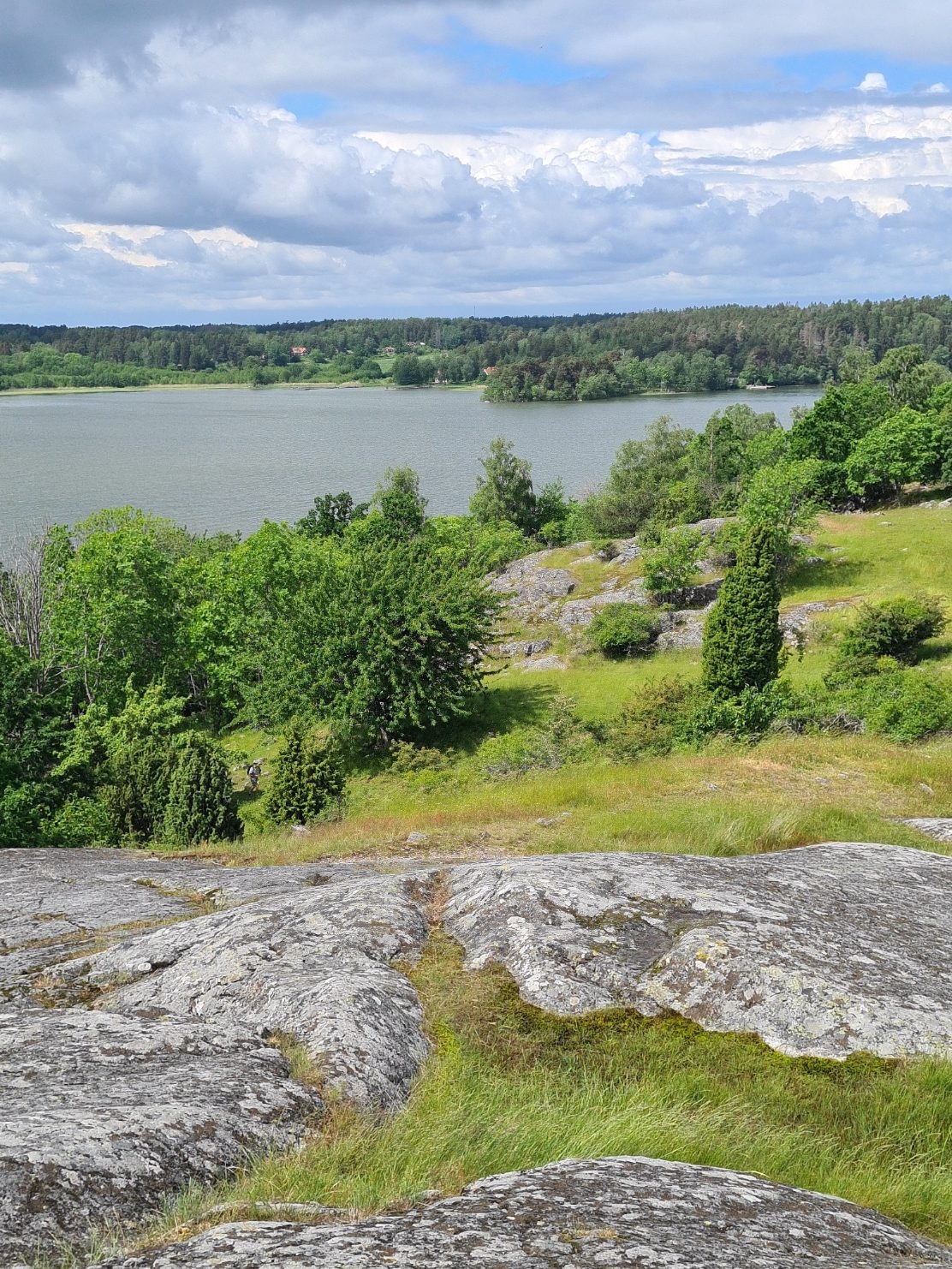 You see, once Björkö wasn’t the bucolic quiet place it is now. Once, Björkö was home to a bustling centre of commerce called Birka, home to approximately 4 000 people which makes Birka the largest city in Sweden in the eighth and ninth century. Here you could find bronze-casters and comb-makers, men who traded goods from faraway places Like England and Constantinople. The majority were Vikings, but the craftsmen came from far and wide to settle in this prosperous place.

Among the over 200 000 finds in Birka are coins with Arabic inscriptions, precious glassware, tools for metalworking, a surfeit of fox and marten paws, beads of all kinds, remnants of shoes and belts, of weapons and utensils. Most of this comes from the excavated graves. Of the buildings that once stood here, nothing remains—the people of Birka built in wood, wattle and daub. There are indications that some of the buildings were burned, but mostly it seems as if the site was abandoned and left to decay sometime late in the tenth century.

But in the ninth century, Birka was a place heaving with life: people came from all over to trade. The locals sourced furs (hence all those fox paws) and slaves, iron and boats. The travelling merchants brought silver and amber, rich textiles from the East and elegant headwear. 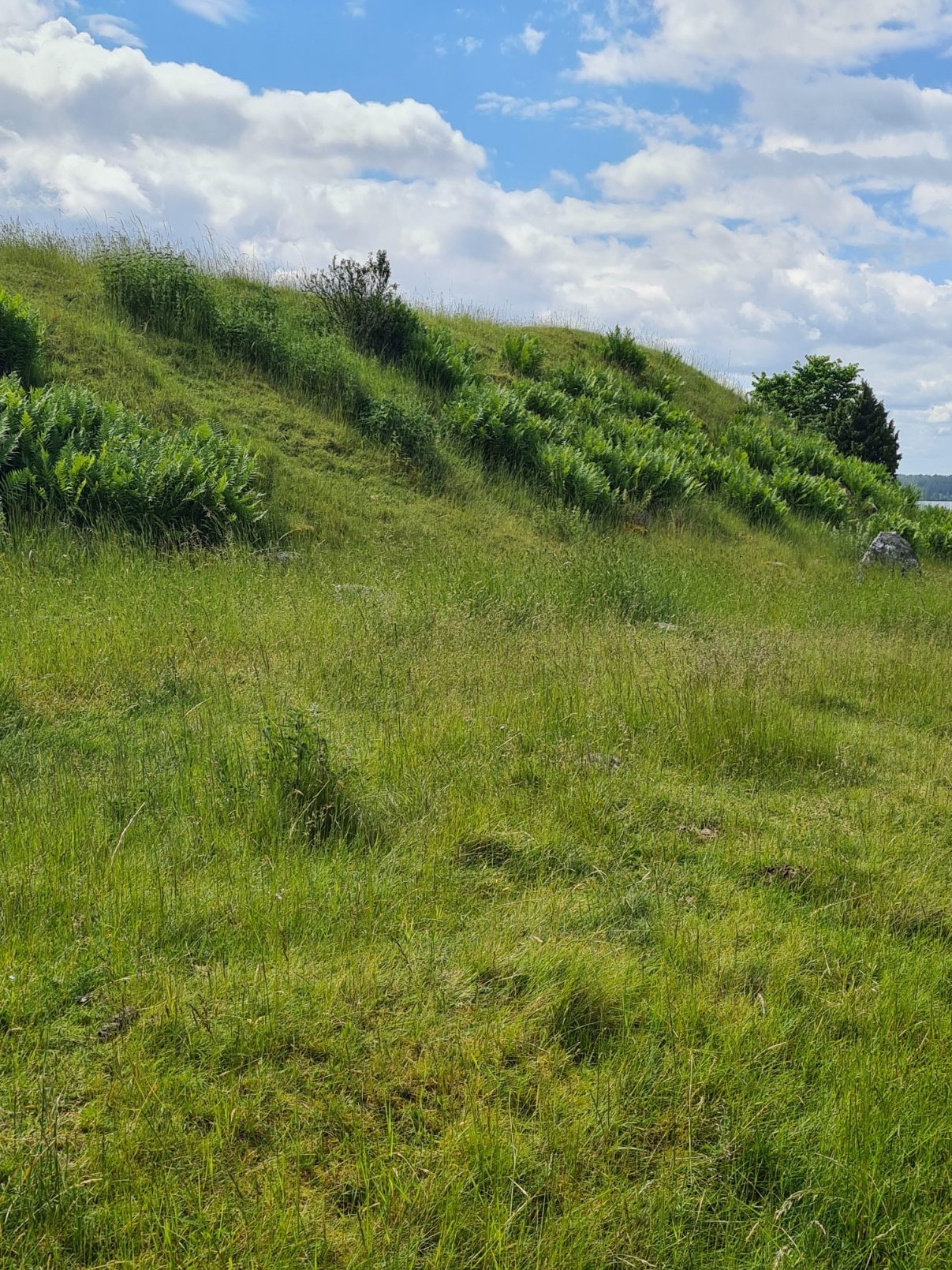 The town was relatively well protected, enclosed by a high earthen rampart atop of which sat a wooden palisade. Approximately 40 warriors were taxed with the defence of Birka—but I imagine it would have been hard to defend yourself against an attack from the sea. After all, the entire town of Birka lay along the shore, each narrow alley ending in a little jetty. Convenient when loading and unloading all the various boats and ships. Just as convenient for offloading men intent on destruction. 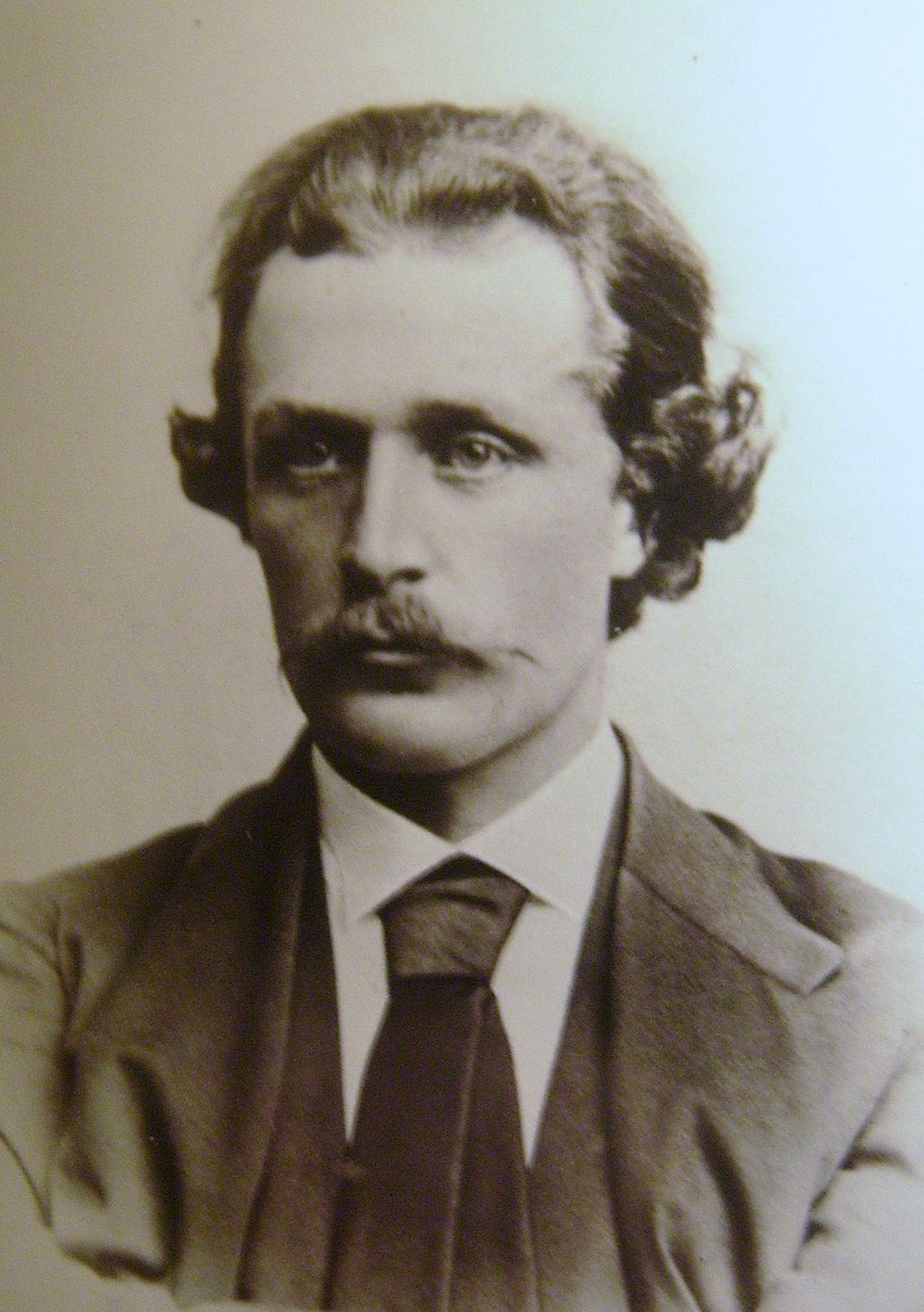 The man responsible for most of the excavations at Birka was called Hjalmar Stolpe. He spent two decades in the latter half of the 19th century meticulously digging his way through the various graves. In one of these, he came upon a skeleton that had been buried sitting astride a saddle. In the same grave were the remains of two horses, as well as weapons of all kinds.
“A warrior,” Stolpe concluded, before assessing the individual to have been in relatively good health and 173 centimetres tall. That was that, according to Stolpe, who was rather unsurprised at finding a Viking warrior buried in a Viking site. He was, however, very impressed by the two horses. While many graves in Birka have a horse among the items sent along to the afterlife, this is the only grave with two—one of which was a mare. It was very unusual to sacrifice a mare. 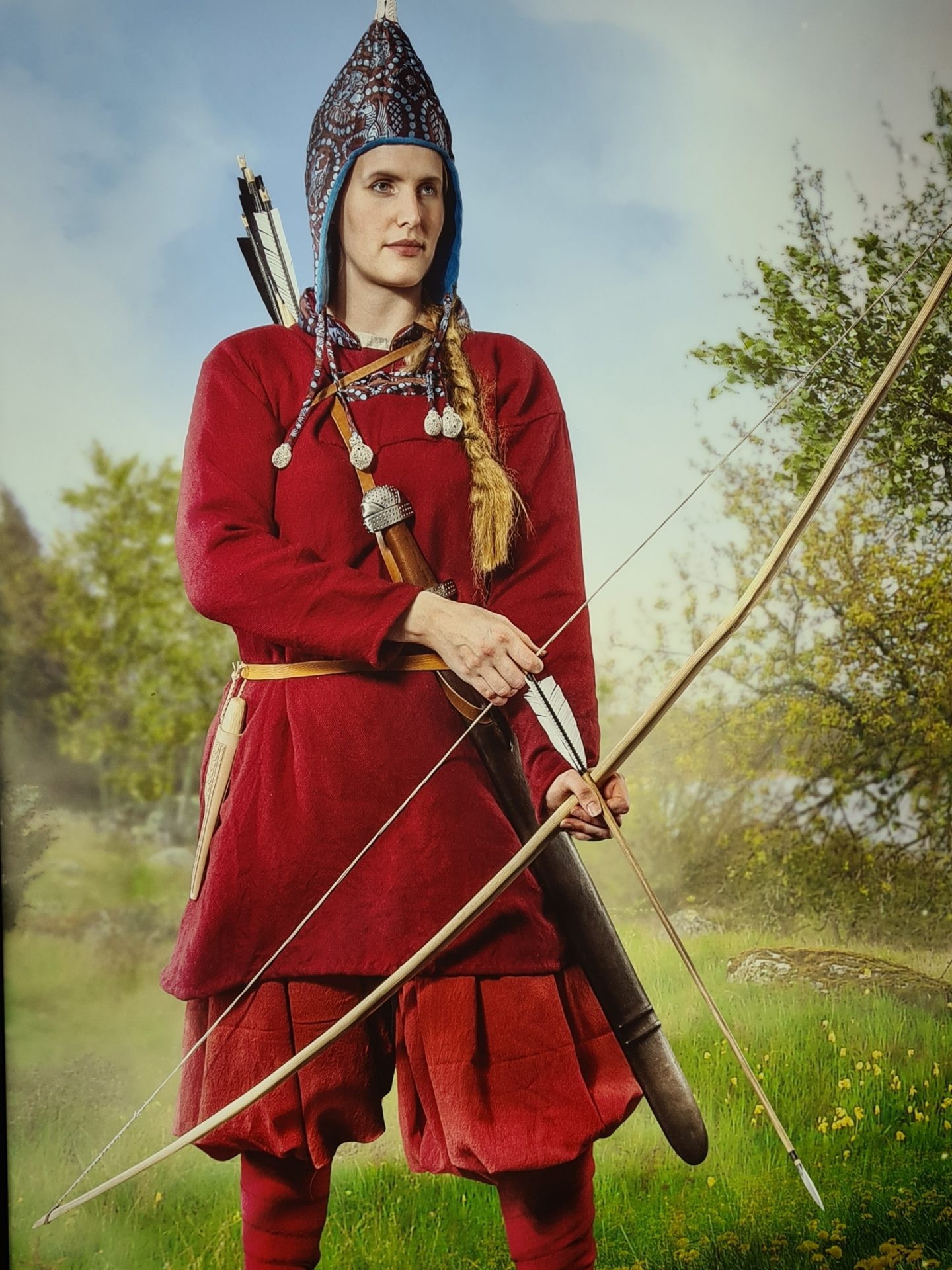 In the 1970s, a group of osteologists inspected the remains of the Viking warrior.
“Hmm,” one of them said. “I think this could be a woman.”
What? Seriously? A female Viking warrior? Everyone knew shield maidens were just a myth!(Segue discreet snickers)
Except, of course, that the warrior Hjalmar Stolpe dug up has now been proven to be a woman—and a powerful woman at that, given the war axe, the sword, the battle knife, the arrowheads that were found with her.
Me, I am of the opinion that this unknown kick-ass lady was an exception rather than the norm, if nothing else because back in Viking times, sheer physical size and strength was important if you were a warrior. But looking at the recreated images of what the Birka shield maiden may have looked like, I am tempted to high-five her and say “You go, girl!”

There is not much left of Birka. As a visitor, you have to close your eyes and activate your imagination. A cluster of small buildings, neatly laid out along narrow alleys, the stench of ordure and intestines from behind the butcher. Children play as well as they can in the constricted space, from the various workshops come the sounds of hammer on metal, of looms clacking. Loud voices, someone rolls a barrel of mead towards one of the long houses. From somewhere to my right comes the smell of roasting meat, and a sequence of young girls come carrying baskets of bread. 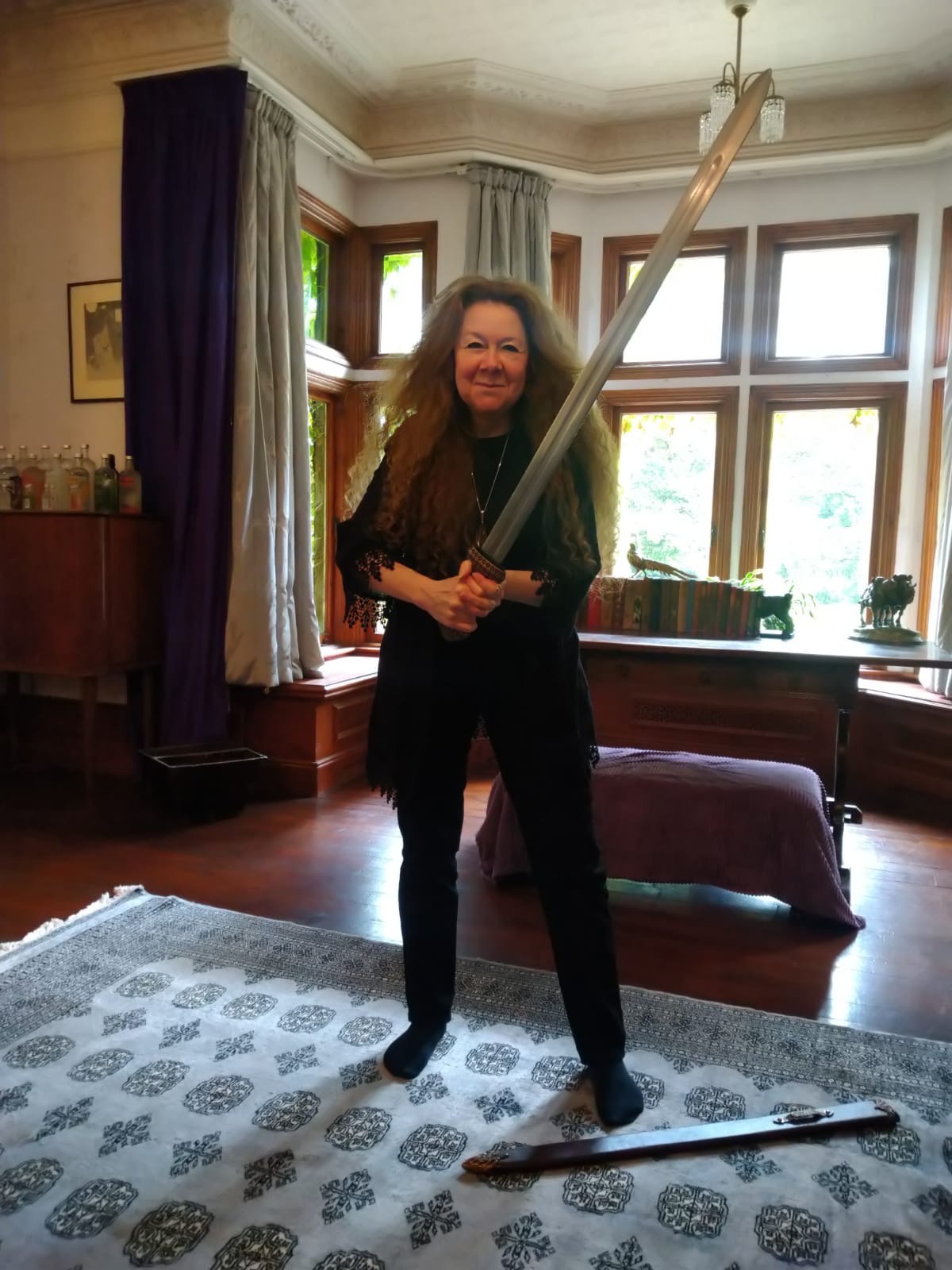 Yes, I can envisage life as it was then—barely. Someone who excels at breathing life into this period—and this place—is Christina Courtenay. She has spent the last few years immersing herself in the Viking culture—the lady even has a Viking sword, so best not rile her—be it how they dressed to what they ate to how they wrote. All of this research explodes into vivid life in her latest release, Whispers of the Runes. 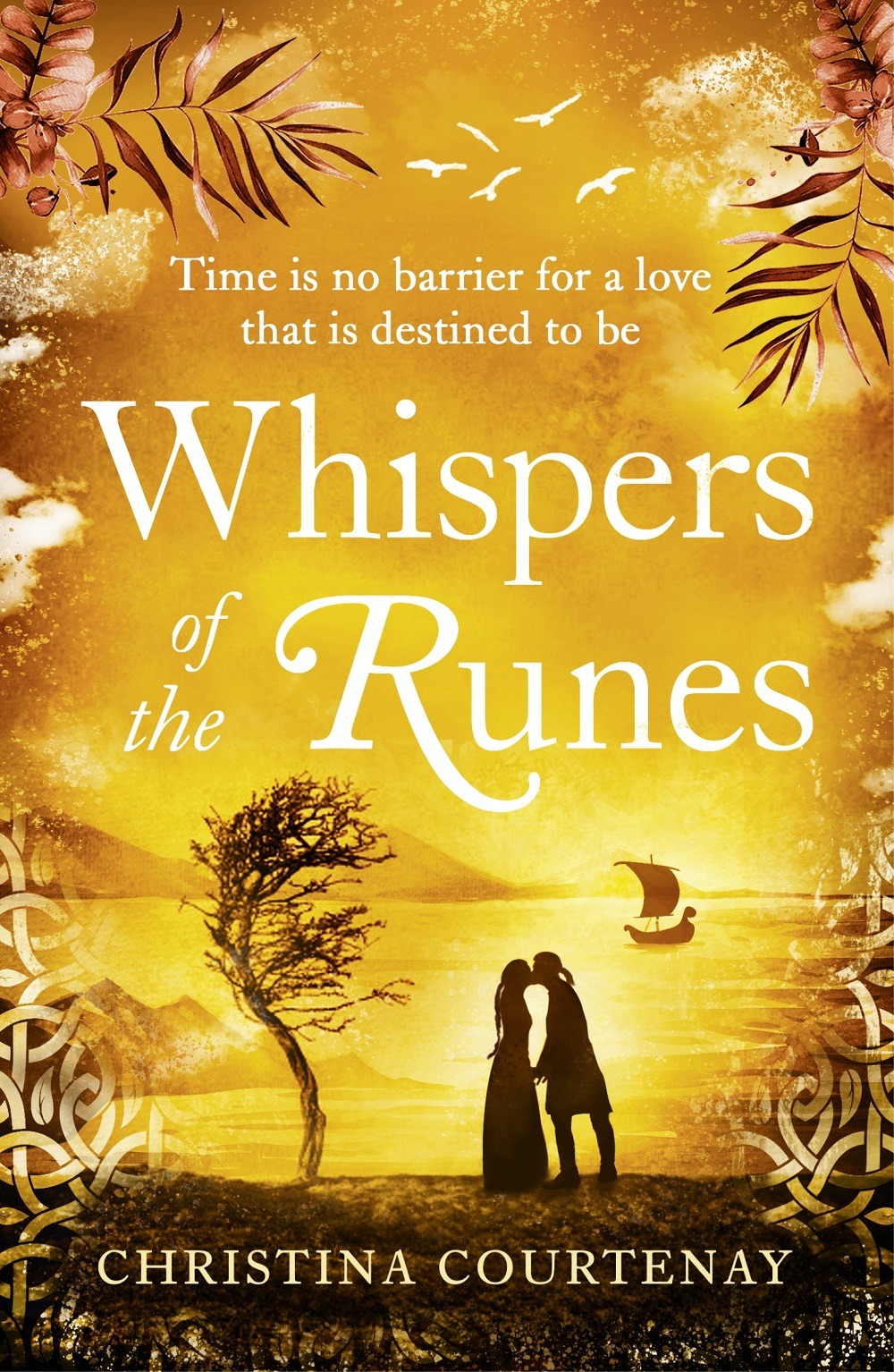 Time is no barrier for a love that is destined to be.

She couldn’t be sure that she had travelled through time … but deep down she just knew.  And her only way back had just disappeared.

When jewellery designer Sara Mattsson is propelled back to the ninth century, after cutting herself on a Viking knife she uncovers at an archaeological dig, she is quick to accept what has happened to her. For this is not the first Sara has heard of time travel.

Although acutely aware of the danger she faces when she loses the knife – and with it her way to return to her own time – this is also the opportunity of a lifetime. What better way to add authenticity to the Viking and Anglo-Saxon motifs used in her designs?

As luck has it, the first person Sara encounters is Rurik Eskilsson, a fellow silversmith, who is also no stranger to the concept of time travel. Agreeing that Sara can accompany him to Jorvik, they embark on a journey even more perilous than one through time. But Fate has brought these two kindred spirits together across the ages for a reason…

Sounds exciting, doesn’t it? Having read Whispers of the Runes in one, intense sitting, I can verify that it is exciting. It also like taking a dive straight into the past. Having read several of Christina Courtenay’s previous books, I was prepared for being immediately swept away by the story—and Whispers of the Runes did not disappoint, landing me in the distant ninth century in less than five minutes.

I love how Ms Courtenay weaves her beautiful prose into this vivid depiction of Viking life. From utensils to clothes to dwellings and transportation – with a touch as light as gossamer, she paints the past, breathing life into a world that no longer exists. I particularly enjoyed her descriptions of Birka—even more so now that I have been on site myself.

Add to this a well-developed plot and two wonderful main protagonists, and you have a read that sucks you in and holds you captive right up to the moment when you emerge only to discover with a little sigh that you are no longer with Rurik and Sara in long-ago Eskilsnes. Fortunately, Ms Courtenay has written more books featuring Vikings and time travel – and is planning at least one more!

Want your own copy? Buy it here! 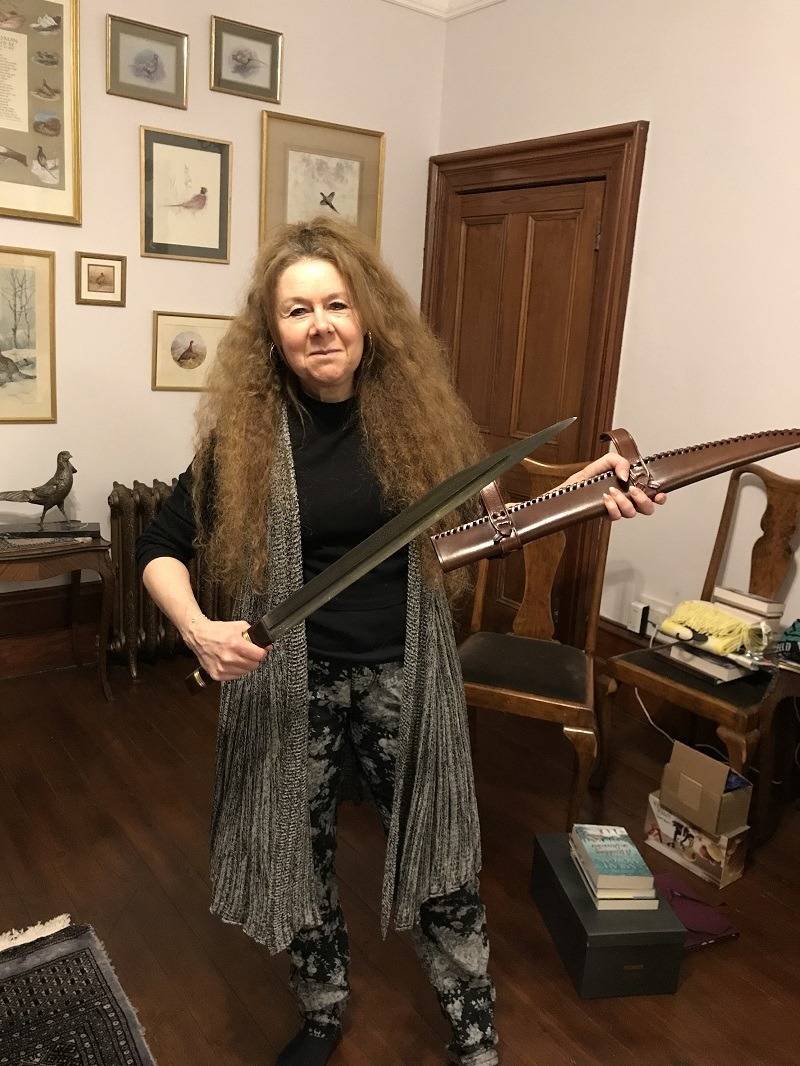 Christina Courtenay writes historical romance, time slip and time travel stories, and lives in Herefordshire (near the Welsh border) in the UK. Although born in England, she has a Swedish mother and was brought up in Sweden – hence her abiding interest in the Vikings. Christina is a former chairman of the UK’s Romantic Novelists’ Association and has won several awards, including the RoNA for Best Historical Romantic Novel twice with Highland Storms (2012) and The Gilded Fan (2014) and the RNA Fantasy Romantic Novel of the year 2021 with Echoes of the Runes.  Whispers of the Runes (time travel published by Headline 24th June 2021) is her latest novel. Christina is a keen amateur genealogist and loves history and archaeology (the armchair variety).

5 thoughts on “Visiting with Vikings – of Birka, shield maidens, and a brand-new release”