Today, I am hosting Sarah Kennedy on my blog as part of her book tour arranged by The Coffee Pot Book Club. This isn’t Sarah’s first rodeo. Queen of Blood is the fourth book in her series The Cross and the Crown, featuring Catherine Havens. Catherine is a nun – well, to be exact she’s an ex-nun, seeing as there are no longer any convents in England. Henry VIII saw to that. Those that still hold to the Catholic faith have had a hard time of it for the past few decades but now, perhaps, there is reason to hope, seeing as Henry VIII’s eldest daughter, Mary, has just become queen. Mary has never renounced her Catholic faith. Not necessarily good news for England – or for former nun Catherine.

One of those determined to rid England of this papist queen was Thomas Wyatt. He plays a central role in Ms Kennedy’s book, which is why I am very happy to pass you over into Ms Kennedy’s capable hands as she gives us a bit more detail about Wyatt and his rebellion. Take it away, Ms Kennedy!

My latest novel, Queen of Blood, has at its heart the Wyatt Rebellion, which took place very early in Mary Tudor’s reign. The Wyatt here is Thomas Wyatt, son of the poet Thomas Wyatt, who is still famous for his translations of Petrarch’s sonnets into English, including one that may have hinted at an affair with Anne Boleyn.

The elder Wyatt has always interested me, because his poetry (often translated from Italian originals) is not only beautiful in its language and structure but also depicts the workings of the court of Henry VIII, sometimes in quite unflattering terms. Wyatt’s narrator is ignored and discarded by court ladies who “sometime did me seek,” and the famous poem “Whoso list to hunt” suggests that one particular lady, often thought to be Anne Boleyn, can no longer be “hunted” by a love because she belongs to “Caesar” (likely Henry VIII). He paints a portrait of a court of intrigue, backstabbing, and general disloyalty. Wyatt spent some time in the Tower of London, though, unlike some of Henry VIII’s other victims, he didn’t die there. He died, rather ignominiously, of a fever.

This provides some context for the rebellion of his son, the younger Thomas Wyatt. Wyatt the younger was no poet, that we know of, but he was certainly involved in court intrigue. When it became clear that Mary Tudor would claim the throne of England, he set out to overthrow her, or capture her, or assassinate her—it’s not very clear what he and his cohorts really thought they would do with a sitting queen if they managed to get to her.

Wyatt was not alone. His co-conspirators included, among others, Henry Grey, the Duke of Suffolk and the father of Jane Grey, and he managed to raise somewhere between 3000 and 4000 followers before he marched on London. Unhappily for him, his co-conspirators did not succeed in garnering the support they required to attack London and the queen, and the other armies upon whose assistance Wyatt was depending failed to appear.

It was February, not an auspicious time for an attack. I imagine the cold, wet weather they must have encountered, which would have been dispiriting in and of itself for men on foot. They were approaching from the southeast, and the first bridge they attempted to take, London Bridge, was already fortified against them. The little rebel army was forced westward, on the south bank of the Thames, only to find that bridge after bridge was impassable.

They finally made it across at Kingston, only to discover, as they came toward the city, that Mary’s forces were ready for them. Many deserted, and many others were captured. Wyatt himself was taken quickly, and he, along with some of his men, met a horrible death.

In hindsight, it was a foolish and doomed venture. Mary remained queen, and Wyatt’s rebellion likely led directly to the executions of Jane Grey and Guildford Dudley, who might have remained figures upon which to raise further rebellions, had they remained alive. So what was gained? Very little, as it turned out. And much was lost. Mary Tudor’s execution of Jane Grey still lingers in the historical record as part of her “bloody” legacy.

Thomas Wyatt may have learned his politics at his father’s knee. He may also have inherited the curmudgeonly, bitter attitude toward authority and personal disloyalty that his father expressed in his poems. He may simply have been a Protestant who would not stand for a Catholic queen and a Spanish king on the throne of England. Whatever his motivations, his rebellion ended almost before it began, and it’s one of the events of Mary Tudor’s reign that is often forgotten in her later religious persecutions and military failures. Thomas Wyatt the Younger might have done more to further his cause—and to make himself more enduringly famous—if he had chosen, as his father did, to write poems instead of to wage war.

Ha! I think the world would have been a fairer place entirely if people throughout the ages had chosen poetry before violence. Thank you, Ms Kennedy for an interesting post. Now to the book itself: 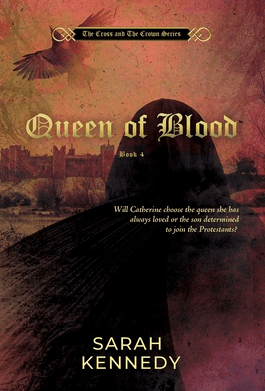 Queen of Blood, Book Four of the Cross and the Crown series, continues the story of Catherine Havens, a former nun in Tudor England. It is now 1553, and Mary Tudor has just been crowned queen of England. Still a Roman Catholic, Mary seeks to return England to its former religion, and Catherine hopes that the country will be at peace under the daughter of Henry VIII. But rebellion is brewing around Thomas Wyatt, the son of a Tudor courtier, and when Catherine’s estranged son suddenly returns from Wittenberg amid circulating rumours about overthrowing the new monarch, Catherine finds herself having to choose between the queen she has always loved and the son who seems determined to join the Protestants who seek to usurp her throne. 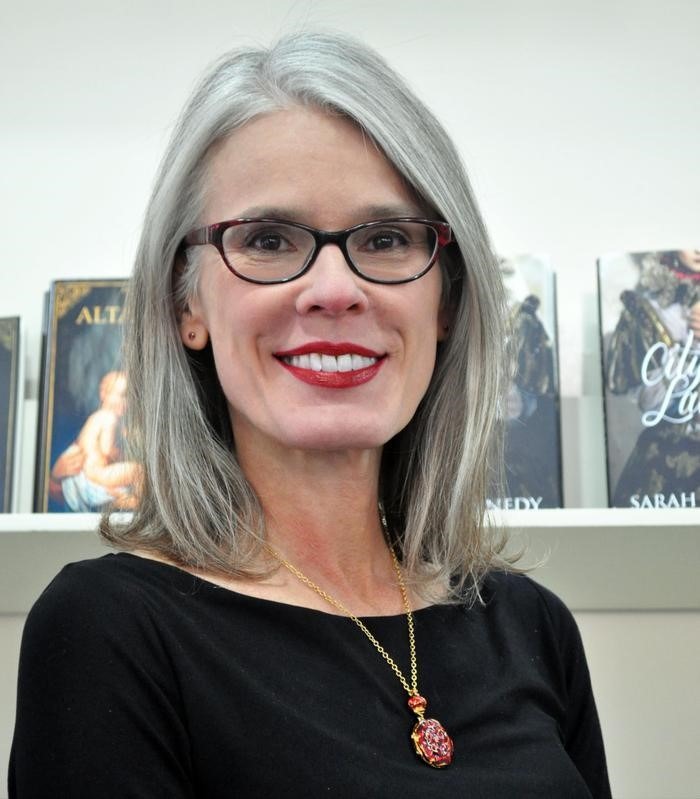 Sarah Kennedy is the author of the Tudor historical series, The Cross and the Crown, including The Altarpiece, City of Ladies, The King’s Sisters, and Queen of Blood. She has also published a stand-alone contemporary novel, Self-Portrait, with Ghost, as well as seven books of poems.  A professor of English at Mary Baldwin University in Staunton, Virginia, Sarah Kennedy holds a PhD in Renaissance Literature and an MFA in Creative Writing.  She has received grants from both the National Endowment for the Arts, the National Endowment for the Humanities, and the Virginia Commission for the Arts. 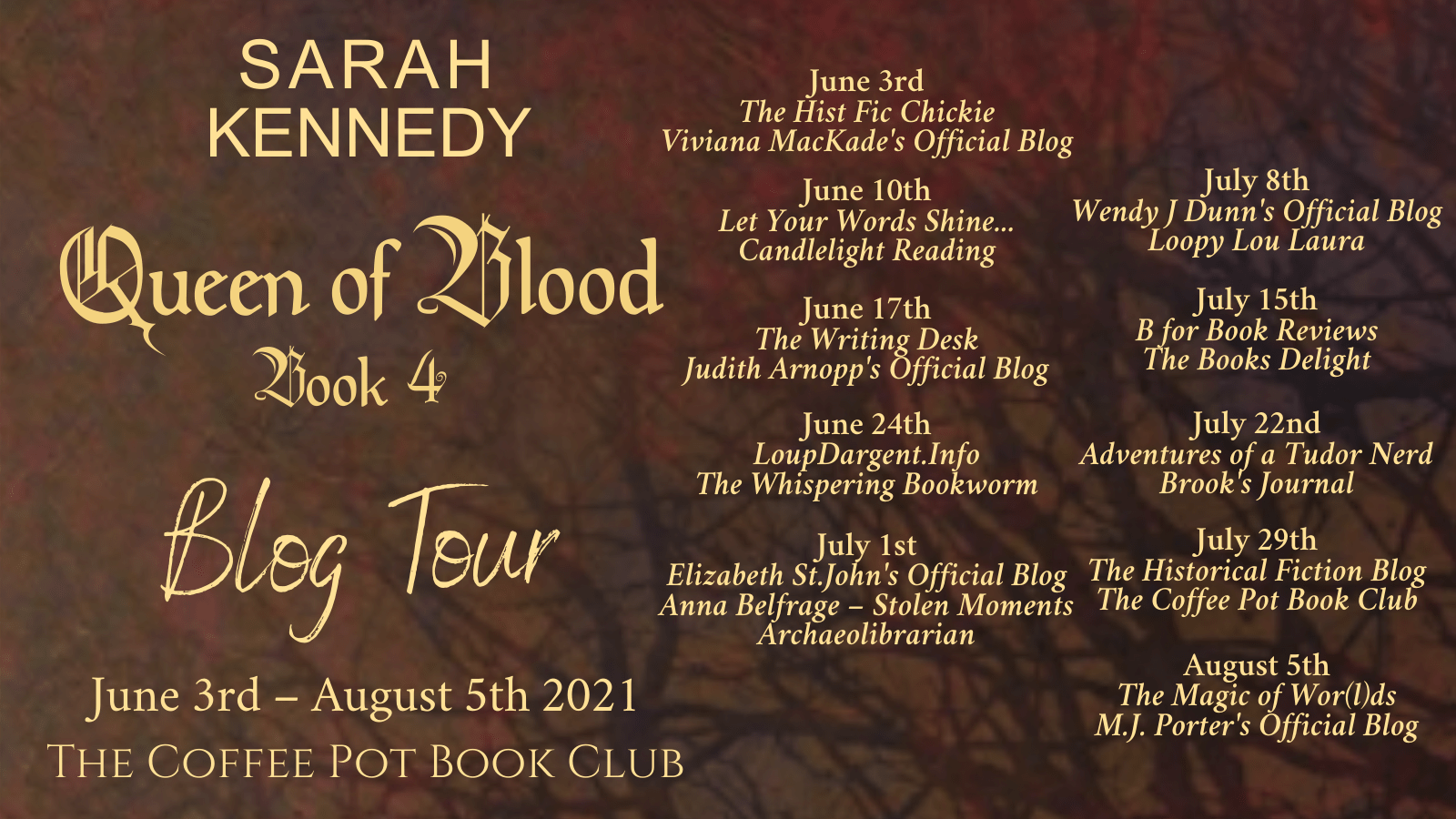