The above is supposed to symbolise the fact that most women I know grew up playing games in which they were as strong as any boy—sometimes even stronger, endowed with superhuman abilities. (Superman, go break a leg – here comes SUPERWOMAN!) And yet, for some odd reason, the old trope that most girls dream of being a princess seems to be very much alive and kicking. Mind you, some princesses are deffo very kicking—they’re the ones that wear their lycra emblazoned with an S underneath all those layers of lace—but in most cases IRL princesses have until relatively recently been a commodity, something to be dangled as a marital prize when negotiating alliances, peace treaties and whatnot. In the good old days, a princess was a bride-in-waiting from the moment she excited her mother’s womb—but she would have no say in who she wed or when or how.

Before we go any further, I think it is important to point out that princes (and kings) were quite often also obliged to set personal preferences aside to wed as it best served their country. The big, big difference, however, was that the world at large accepted that said prince or king had someone on the side. A princess never had that option. An adulteress was always considered far more sinful than an adulterer (because, let’s face it ladies, everyone knows it is woman who inflames lust, men being incapable of controlling themselves when faced with come-hither eyes…Err…) In the specific case of a princess who was wed to someone for dynastic reasons, she was watched over constantly as it would sort of kill the dynastic aspirations of the royal hubby if a future baby was sired by someone else than him.

Anyway: for all these princesses (or noblewomen, or rich merchant daughter) the rise of Christianity led to things going downhill. Take, for example, my northern corner of the world.  Viking women had a strong position in society, in many ways considered equal to any man. A woman could raise rune stones—and many did. She could build bridges, run farms, inherit property, decide who’d inherit her property, have a say in her marriage, tell Mr Abusive Husband to sod off – an early version of “walk out the door, don’t turn around now, I don’t need you anymore”. A Viking woman was respected, with similar rights as a man had.

The same thing goes for Anglo-Saxon ladies. Initially as pagan as the Vikings, these were strong independent women, snickering at such idiotic ideas as wifely obedience. Once the Christian missionaries landed, many of these ladies embraced the new faith, but retiring violets they were not. Well, we all know what happened to the Anglo-Saxon ladies: the Normans – and in their wake came an army of determined priests, with the objective of wiping away any remnants of the old pagan society, such as the lunacy of assuming women were intellectual equals to men.

According to legend, Rollo the Viking (and, we must assume, his faithful companions as otherwise poor Rollo must have walked about in a state of constant sexual exhaustion) was the forefather of the Normans. Clearly, Rollo did not make it his mission in life to help empower the Frankish ladies along the lines of his Viking sisters. In France, the influence of the Holy Roman Church was strong—this was, after all, the land of Charlemagne, crowned emperor by the pope himself. Not that there weren’t strong and independent women in France, but the voice of the Church was loud and carrying, drowning out any potential feminine protests.

Some of those early Church fathers really had it in for women – misogynists, one could almost call them, except that they’d disagree, having no understanding of the term as such. Plus, they’d hasten to point out, their opinions of women were based on facts, like it being Eve, a woman—the first woman—who yanked the apple off the Tree of Knowledge, thereby banishing mankind from Paradise. Besides, St Thomas and St Augustine would add, probably quoting St Paul, “man was not created for the sake of woman, but woman was created for the sake of man”. Alternatively, they’d throw in yet another quote from Corinthians: “man is the head of woman”. Or mutter something about “the weaker vessel”. (And here I just have to stand up and say HA! Weaker vessel indeed: had it been men giving birth to babies, humankind would have died out before we left the caves behind)

Christianity in its early forms was virulently patriarchal (as were/are Judaism and Islam), which clashed with societies in which women were considered just as capable as any man when it came to managing land and other property. Uh-uh, the Church argued, such matters were best managed by men, and if the woman in question stood to inherit, it was best that someone else – a man – managed it for her. Woman was reduced to a chattel: either she belonged to her father or brother, having little say in her affairs, or she belonged to her husband – having even less say in her affairs. This, of course, was not always valid. Strong women – and especially those with substantial wealth – have always managed to prove themselves an exception to the rule, but for most girls in the Middle Ages, be they princesses or not, it was very much about duty and obedience.

It wasn’t only those ancient Catholics: Religious leaders of all ilk have, throughout the ages, repeated ad nauseam that woman is weak, woman is defective, woman must obey. Legally, woman was compelled to obey – in some Western countries well into the 20th century, in other places she is still relegated to being a second-class citizen. At best.

Anyway: back to the Middle Ages. A girl was born, she was married off, she had babies – and in many cases she died having babies – and then she died. If her husband predeceased her, she could, as a widow, experience a degree of freedom she’d never had before. A widow was allowed to manage her own affairs, was even allowed to continue conducting her deceased husband’s business. I’m thinking there was a lot of high-fiving going on among widows… 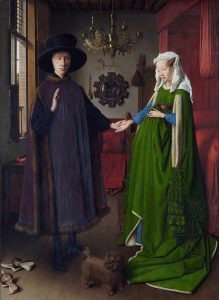 For most women, they passed from being the property of their fathers to that of their husbands on their wedding day. A momentous occasion, to be sure, and I do hope some of those brides skipped to church, elated at being joined in matrimony with the prince of their hearts. Many did no skipping. This probably applied to a greater extent to princesses and other high-born ladies. For them, marriage was a business transaction, a young fertile womb traded for influence, for peace, for future alliances. But on the wedding day as such, our little bride was the queen of the day, decked out in as much finery as her father could afford. This seems to be a tradition that has survived the vicious gnashing of the teeth of time: in this day and age, a bride is still very much a queen—or a princess, no matter if in secret she’s wearing something emblazoned with Superwoman beneath all the lace.

The status of our bride was signalled not only by what she wore. In some countries, brides tied the knot adorned with a crown. Heavy wedding crowns were kept in various churches, and the brides could borrow them for the day. These crowns were in gold or silver, some were massive, some were dainty. Whatever the case, they underlined the fact that on this day – this day alone – the bride took centre stage.

Often, the bride crowns were the ones that normally adorned the statues of Virgin Mary. This led to expectations on the brides wearing the crowns. They had to be pure and unmarried. Should a little baby make its entrance into the world too soon after the wedding, questions would be asked, and heavy fines imposed on a bride who’d worn the crown while no longer virgo intacta.

In Sweden, the tradition with bride crowns took off AFTER the Reformation. (What can I say? Not a nation of early adopters – at least not back then.) Yet again, there were expectations that any bride wearing a crown came to the marriage bed “untouched”, and as the ancient tradition of betrothal here in Sweden quite often allowed consummation prior to the wedding, one would have thought the number of young brides wearing crowns would have been low. The Reformed Swedish Church had a solution: couples who were betrothed were no longer allowed to sleep with each other. See? Easy-peasy.

Now, a virgin bride would enter the church with her hair hanging loose. This would be the last time anyone would see her hair like that, and I assume ample care was taken to ensure the hair shone with health. Once a married woman, our young bride would be expected to hide her hair permanently from view (in some cultures, the long hair was cut off – this was the case in some parts of Sweden, well into the 20th century) but on this single day in her life she was allowed to show off her crowning glory, atop which might have perched a real crown. 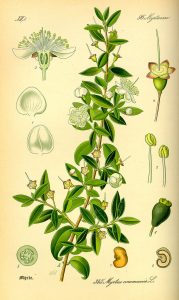 Not all crowns were made of silver or gold. Already in the Middle Ages, alternative crowns were made with myrtle. Why myrtle, one wonders, and I suppose the easy answer is that myrtle is associated with Aphrodite, goddess of love. The other, somewhat obscure reason, is that myrtle was once seen as a contraceptive herb. By wearing a myrtle crown, the bride was telling the world that so far she hadn’t been sipping myrtle tea, ergo, she was as pure as they came. Hmm.

Here in Sweden, myrtle crowns were all the rage in the 19th century and onwards. Mothers would plant a myrtle tree on the day of their daughter’s baptism, and then sprigs from those myrtles would be used in the future crown.

To this day, some Swedish brides wear crowns – as a tradition, not as an indication of purity. Some families have crowns that have been handed down for generations – my mother-in-law wore the Belfrage crown on her wedding day, an experience she summarised as “excruciatingly uncomfortable”. But she did look rather spectacular, IMO, regal almost.

These days, most brides in our parts of the world do skip on their way to church. They have chosen their groom, they have hopes and dreams of a Happily Ever After with the prince of their heart. Divorce statistics of 40-50% indicates that HEA is rather elusive – or maybe expectations are too high. Our medieval bride had few illusions. She knew her duty, she knew her place – beneath her husband. Did she aspire to HEA? Rarely. Did she hope for contentment? Possibly. But on that day, her wedding day, she was, for one brief moment, a true princess.