In 1283, little Isabel saw the light of the day. This the latest fruit of the proud House of Ivrea was the first of seven siblings. At the time of her birth, her daddy, the future Sancho IV, was at loggerheads with his daddy, Alfonso X. Why? Because Sancho wanted to become king once Alfonso died, but there was a teensy-weensy complication in the shape of his two young nephews, sons to Sancho’s older (and now deceased) brother. Obviously, the eldest of these nephews was in line for the throne, right?
“No, no, no, absolutamente no,” said Sancho (somewhat repetitively). “Castilla necesita un hombre, Castile needs a man to lead it, not a half-grown pup!” He had a point: Castile was constantly at war, leading the charge in the fabled Reconquista against the Moors who still clung on to the Iberian Peninsula. Plus, now and then Castile locked horns with Aragon—or Portugal.

Alfonso X died in 1284. By then, a majority of the Castilian noblemen supported Sancho who became king, his wife Maria de Molina crowned queen.

Sancho seems to have been a competent king – and smart enough to rely heavily on his wife, who was to go on to prove herself an extremely ruler in the future. 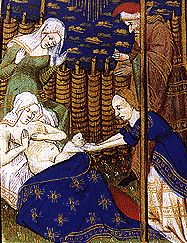 For now, though, Maria was busy with babies. In 1285 she presented Sancho with an heir, Fernando, and over the coming years the pitter-patter of five more children would echo across the tiled floors. For Isabel, the birth of her brothers meant she became less important. Yes, she was still an Infanta of Castile, but as there was a male heir and four spares, she was demoted to a marital prize, an asset to be used to protect Castile’s interests. Such was the fate of most royal daughters (and sons) at the time, and Isabel was educated accordingly.

The political situation in Castile was volatile. Sancho had a younger brother who happily fanned the flames of dissent –seems to have been a recurring problem in medieval times: a surfeit of royal sons usually had a destabilising effect. In Sancho’s case, things were further complicated by his two nephews. His now-not-so-loving Mama, Dowager Queen Violante, firmly sided with her grandsons. She was also the aunt of the king of Aragon, and Aragon never missed an opportunity to yank Castile’s chain, so obviously Aragon supported the young nephews. What to do, what to do, Sancho may have muttered at which point Maria sailed in and suggested they do what they always did in situations like this: “Offer Jaime of Aragon Isabel’s hand in marriage.”

Jaime of Aragon was sixteen years older than Isabel. At the time, he was an adult man and, one would think, eager to fill his own royal nurseries. He had also recently become king at the death of his older brother and an alliance with Castile was quite the prize, which is why Jaime agreed.

In December of 1291, Isabel of Castile married Jaime of Aragon in Soria. The bride was eight and, one supposes, somewhat overwhelmed. The groom not so much. With a bride that young, consummation was out of the question, and four years later the untouched little bride was returned home with a “thank you but no thank you” note. The marriage was annulled and Jaime hastily wed Blanche of Anjou, a woman who would deffo fill up his royal nursery as she gave him ten kids. (As an aside, several years later, Jaime would propose a marriage between his eldest and another princess of Castile, Leonor. Pretty much same old, same old…)

So why did Jaime change his mind about his alliance with Castile? Well, in 1295 Sancho IV died, leaving the crown to his ten-year-old son, Fernando. Things were a bit all over the place as Maria de Molina did her best to safeguard her son’s inheritance. Out of the woodwork all sorts of nasty things came crawling, principally the young king’s uncle, Infante Juan, and his cronies. But Maria was resilient and intelligent, capable of combining diplomacy with brute force. Plus, she was a mama bear defending her cub, and we all know just how dangerous they are…

Anyway: for Jaime all that turmoil made him decide he no longer needed a Castilian alliance. In fact, he didn’t want one, eager to take advantage of the Castilian upheaval to strengthen Aragon’s position in the world. For twelve-year-old  Isabel, the political context was probably uninteresting. She was coping with the fact that she was no longer queen consort of Aragon—not that she’d ever been Jaime’s consort, but still.

Isabel sort of disappears at this point. OK, she wasn’t all that visible earlier either—very few people back then were. But fifteen years later, Isabel is yet again in the limelight as a bride.  A bit long in the tooth, some would think. After all, at the age of twenty-seven Isabel was no longer a blushing maid, but at least this time round her groom was of an age with her, three years younger in fact. Jean of Brittany was the son of Arthur, Duke of Brittany, and just like Isabel he’d been married once before—in his case at the tender age of eleven.

Now Jean had a problem: well, he may have had many problems, but one very central issue in Jean’s life was his strained relationship with his stepmother, Yolande of Dreux, and the half-siblings this former queen of Scotland had given him. To not put too fine appoint on it, Jean detested his stepmother and was determined to ensure the Duchy of Brittany never, ever ended up with his half-brother. Best way to do that? Marry a fertile wife and have many, many sons.

Jean’s first marriage was childless. Obviously, that wasn’t Jean’s fault—everyone “knew” the woman was to blame if there were no babies. (As an aside, I do not think peeps back then were that stupid, but it was sort of convenient to blame the woman—if you were the man) Anyway, with Isabel Jean had a new wife, and judging from how fertile Isabel’s mother had been, things looked good. They looked even better in 1312 when Jean became the Duke of Brittany. Except, of course, that there were no babies. Nope. None.

As part of the wedding contract, Isabelle became Viscountess of Limoges. This did not please Jean’s younger brother Guy, who claimed he had rights to the title. Things became a bit tense between the brothers and at some point Jean decided to make Guy happy and transferred the title to him instead. Isabel was not pleased. At all. In fact, so displeased was she that she appealed to the pope and to her husband’s humiliation he was obliged to return the lands to her and instead appease his brother with other titles. I rather like it that Isabella stood up for herself. It offers us a glimpse of a woman who was not only a bride to be bartered but also a person who knew her rights and refused to be brow-beaten into giving them up.

I suppose the issue of no babies and the bitter quarrel over Limoges must have had a negative effect on the Jean and Isabel union. Or maybe it didn’t. Maybe, once the dust had settled, they developed a genuine liking for each other. Except, of course, that Jean was by now getting a bit desperate regarding the “I will never let my half-brother get his hands on my duchy” as one of his full brothers were dead, and the other was seemingly as incapable as he was of siring a child. “I will not let that bastard Jean inherit Brittany,” he may have yelled. And here it is time for a little break to clarify that yes, Jean of Brittany’s dad, Arthur, must have been a man very lacking in imagination as he gave his eldest son in his first marriage the same name as he gave the eldest son in his second marriage. I imagine this did nothing to endear the new half-sibling, Jean de Montfort, to his older brother and namesake…

Anyway: back to our Jean and his wife. The years passed. No babies. But in 1319 brother Guy welcomed a girl to the world. Baby Jeanne was welcomed enthusiastically—especially by her uncle. Here, at last, was a child that could throw a gigantic monkey wrench into de Montfort’s hopes of ever inheriting Brittany.

As to Isabel, she was now 36 years old and probably resigned to being barren. It is interesting to note that her hubby only sired one child, an illegitimate son, which would indicate the lack of children may have been more due to him than her. Brother Guy only sired one child—and I imagine he too would have held out for a son, so it was probably not due to lack of effort. (Come to think of it, half-brother Jean de Montfort did not exactly fill his nurseries to bursting; one son, one daughter in sixteen years of marriage…)

None of this would have mattered to our Isabel. The facts were that she had not been capable of presenting her husband with what he most desired: an heir. When she died in 1328, our Jean wasted little time in getting married again, this time to a woman twenty-four years his junior. No luck that time around either, and Jean therefore had to bite the bitter apple and realise he would never hold a legitimate child of his own. So instead he married off his niece to Charles de Blois, nephew of the French king, and announced them to be his heirs. Did that work out? Not so much, but that is an entirely different story.

Isabel lived most of her life in the shadows. Had she been older when she first wed, old enough to consummate the marriage, she may very well have been the Queen of Aragon, mother to future kings. But she was nothing but a child when she was wed, still a child when she was returned home. Many years later, she set out on an adventure to a distant land with a new hubby. What were her hopes, her dreams as she set out for Brittany? We do not know. What we do know is that eighteen years later, Isabel died, far away from where she was born. She strikes me as having been a lonely lady, but I do hope someone was there to hold her hand as she slipped from this world to the hereafter.