New Year’s Eve is a date imbued with hope. It is also host to a variety of traditions, all of them meant to ensure a happy future—or at least give us a glimpse of what is to come. Eating twelve grapes at midnight is one of those “let us hope things go well next year” traditions. Cracking an egg into a glass of tepid water and attempting to read the resulting shape is more into “I see a handsome stranger waiting for you” – except that no matter how you crack that egg, it never resembles a handsome stranger. And, of course, New Year’s Eve is the day of dreaded resolutions…

New Year is also a marking of time. One more year lived, reasonably one year less left. Was it a good year? A productive year? Well, when it comes to 2020, I imagine the consensus is that it was not a good year. It was a year in which we were obliged to come face-to-face with our vulnerability—as individuals and as societies. It was a year when we were brutally reminded of the fact that we’re all mortal. I mean, we know we won’t live for ever (we’re not stupid), but mostly we manage to push that thought away, right? Not so during 2020, when many of us have friends and relatives who succumbed to a “simple” virus.

As I write this, close to 1.8 million people have died of Covid19. Many, many more are struggling in the aftermath of having had it, and even more have seen their financial security ripped away, have lost income and home.

2020 has also been a year of increased polarisation. People drift right or left and those who believe in consensus and dialogue are a dwindling crowd. Problem is, neither the extreme left nor the right will ever achieve a full majority and unless we somehow find our way back to the art of compromise, the future for democracy looks somewhat grim. We, the people, seem to lap up divisive rhetoric and glide further and further away from those advocating a more balanced approach to things.

I do, however, believe that we, the people, are smart enough to realise that divisive policies will harm us all—even those presently in power. Or maybe it is hope more than belief, but still…

Long before there was Covid 19 or complicated political systems, people marked time. Even our long-gone cave-dwelling ancestors marked time, even if they didn’t exactly break out the champagne (seeing as it wasn’t invented yet). Originally, I imagine it was the winter solstice that marked the end of one year and the beginning of another. The return of the light was a pre-requisite for life, so our ancestors likely did a lot of praying and whatnot as the days grew colder and darker, rituals to somehow beg the sun to return. Places like Newgrange are testament to just how important the solstice was. It promised a new beginning. It promised a return of warmth and sunlight, ensuring future crops and life.

At some point, civilisations began to evolve. Once a certain level of sophistication had been reached, these ancient civilisations needed to record important events and it therefore became important to keep count of the years. New year became an important date and in the Mesopotamian cultures the new year seems to have coincided with the spring equinox. Centuries rolled by and a new power arose in Italy: the Romans. Originally, the Romans celebrated the new year around March 1 (which is why September is essentially named “the seventh month” when it actually is the ninth month) but a couple of centuries before the birth of Christ, the Romans decided to move the new year to January 1st. While this became the beginning of the civil year, most Romans continued to celebrate in March, probably because the weather was better…

Still: thanks to the Romans, a large chunk of the known world now had a common beginning to a new year, a good thing, right? And then came the fall of the Roman Empire and the somewhat chaotic years that followed from which emerged the medieval world, complete with a very varied approach to when the new year actually began.

To some extent, we must blame this on the Holy Church which was no fan of what they defined as pagan celebrations. According to the church, celebrating January 1st deffo fell into pagan territory which was why the council of Tours abolished new year, recommending other dates be used to define when a new year started. Unfortunately, the various representatives to this 6th century council did not agree on one alternative date. Instead, they all returned home with their own individual preferences.

This resulted in a varied bag of dates. Some countries used December 25th as the new year marker. In many countries—including England—new year was now celebrated on March 25th, in connection with the feast of Annunciation. Other countries stuck to the January date, Russia went with September (!), some city-states in Italy chose to start the new year on March 1st instead. Very, very confusing, at least for those who travelled extensively at the time. You could jump back and forth between the years just by travelling from east to west over the Italian peninsula…

In the 16th century, someone high up in the Church had had it with all these confusing dates—and with the Julian calendar, which was slowly but safely slipping further and further away from the actual solar year. In connection with the implementation of the Gregorian calendar in 1582, January 1st was reinstated as New Year’s Day. Yay, one would think—everything was now neatly sorted. Err… Well, no. First of all, the Gregorian calendar was promoted by a Catholic church and named after a pope. Fee fi, fo fum, said the Protestants. “As if we will ever accept some sort of popish date-fiddling! It’s probably a conspiracy.” Which is why almost all the Catholic countries in Europe adopted the new calendar while the Protestant countries did not.

To add further confusion, some of the countries still holding to the Julian calendar adopted January 1st as New Year. Sweden did so in the mid 16th century, Scotland in 1600. (Obviously, their January 1st was a totally different day than in Spain or France as the Gregorian calendar differed approximately 11 days versus the Julian calendar which is why it is a lie that William Shakespeare and Miguel Cervantes died on the same day, namely on April 23, 1616. They both died on that date, but they were two different days, seeing as Cervantes lived in progressive Spain that had adopted the Gregorian calendar while Shakespeare’s life was ruled by the erroneous Julian calendar. I know, I know: totally irrelevant to this post. Or maybe not…)

These days, all this confusion is well in the past. Since a hundred years or so, most countries agree that the new year starts on January 1st—and they even agree on which day has this date. A giant leap for mankind, one could say…

Now that we’ve sorted out the matter of when New Year actually occurs, how about considering those resolutions? A modern invention, you might think, but nope, we know those very, very ancient Babylonians made resolutions—along the lines of promising to pay their debts which also sounds surprisingly modern. The good old Romans also made resolutions. Medieval knights renewed their oaths of chivalry around new year. But it is a relatively modern invention to make resolutions with the intention of making you a better person or have you address challenges that are just that: challenges.

When I was a child, New Year was never about parties and celebration. No, my parents were into introspection and reflection on the past year. There was very little of “ring in the new”, very much of “ring out the old” in that we were expected to review our resolutions—specifically those we’d failed at—and consider just what to do about it in the much shorter lifespan left us. It is not a bad thing to reflect. But for a child of ten or twelve to be lectured on just how life is slipping through your fingers because of indolence and lack of application—well, it kills the festive mood.

Because of the memories of my childhood New Year celebrations I don’t do resolutions. Not that I don’t think I need to improve—of course I do—but New Year Resolutions give me the jitters. Instead, I have hopes. 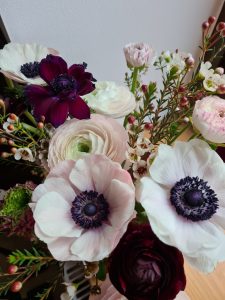 I hope my family and loved ones will remain safe.

I hope Covid19 will soon be a thing of the past,

I hope someone is there to lend a hand to those that need it.

I hope we all embrace the basic goodness within and do something—anything—to help those less fortunate than us.

I hope we become wiser and realise just what a miracle this world of ours is—and just how fragile. We owe it to us and the coming generations to forsake today to salvage the future.

I hope we learn that violence is never, ever the answer. It is always the problem.

I hope we turn a deaf ear to divisive rhetoric and instead listen to the voice within.

I hope I become a better person—kinder, wiser, more patient.

I hope 2021 will be a better year for the world—and for you, dear reader.

Most of all, I hope love will flourish. Because, as St Paul said, “if I do not have love, I have nothing.” Wise words, peeps. Very wise words.

I shall now go on to celebrate my New Year. This year, it is me and hubby and we will put on our dancing shoes and go wild and crazy to the songs we danced to when we were young. And as the clock strikes twelve, we will toast and cheer for the new year. Ring in the new, peeps, ring it in and embrace it, because tomorrow is a new day, a day in which the sun still rises and the world still turns. What can be more wonderful than that?

Allow me to end this post by raising my virtual glass (with virtual champagne) and wish you all a Happy New Year. Hold on to hope, hold on to love. Hold on to your dear ones and hold on to life!