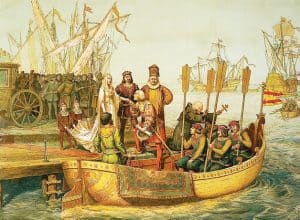 The single biggest tragedy to befall the native people of the Americas was the arrival of Columbus upon their shores. Over the course of a couple of centuries, a deadly cocktail consisting of slavery, disease and warfare was to reduce the native population with 40-80% (it varies substantially from area to area) and what had been thriving civilizations were reduced to memories and ruins.

In 1607, The Virginia Company of London established its first bridgehead into its charter territories. Jamestown was founded on a marshy island in present day Virginia, and a couple of boatloads of settlers were deposited in the wilds to make a new life for themselves. Things did not go as planned, and the first few years of its existence, the colony teetered on the brink of extinction more than once. Fortunately, the colony had a capable leader in John Smith, adventurer extraordinaire, and this gentleman spent quite some time exploring the Chesapeake area and making contacts with the local people. 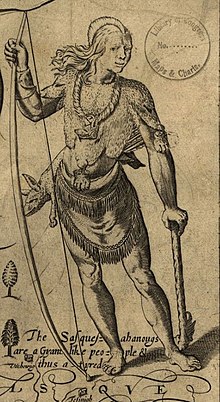 Many of the tribes John Smith visited no longer exist. One such lost people is the Susquehannock. Disease and warfare – both with their fierce cousins the Iroquois and the white settlers – caused the extinction of a once flourishing nation. In fact, today we have no idea what these Native Americans may have called themselves, because there is no one around who speaks their language anymore. Once a language becomes dead, an entire culture disappears—something conquerors throughout the ages have been very aware of. Rip away a language and you are ripping away an identity, especially if the language in question has no written tradition. Languages that are only oral leave nothing behind. Once the last speaker is dead, gone are the stories, the traditions, the unique knowledge and perception the people who spoke it had of the world. Without the words that once belonged to a particular way of living, there is no recounting of those long-gone lives which is why  we have no idea what beliefs, what myths, the Susquehannock held dear. It’s almost as they never existed – well, apart from the odd artefacts that are presently displayed in one or other museum.

But the Susquehannock did exist, a power to be reckoned with, masters over a large swathe of land that stretched from Delaware, through parts of Pennsylvania and into Maryland. John Smith was very impressed by the Susquehannock, claiming they went around dressed in wolf and bear pelts and were all of them big and strong, fully capable of beating the brains out of a man. Despite these ferocious qualities, for the first few decades of their co-existence both the Susquehannock and the Maryland colonists prospered – a win-win situation for both.

Things were not quite as peachy-pie in Virginia. The colonists repeatedly broke the treaties they had signed with the Powhatan Confederacy, and when the angered natives retaliated, the colonists screamed ‘murder’ and demanded that the natives be subdued once and for all. 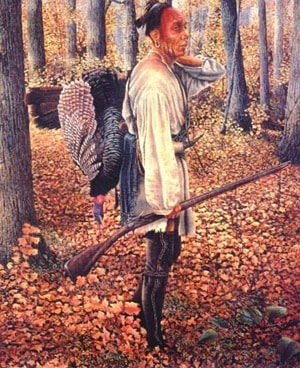 In the 1670’s, the constant skirmishes between the Powhatan and the Virginia colonists escalated into open warfare, and through a series of unfortunate events, the Susquehannock were dragged into the conflict. A decade later, the once so mighty Susquehannock had more or less disappeared. Their wooden forts had been razed to the ground, their men had been slain, their women enslaved, and what few remnants remained had fled due north-west, seeking the protection of the Iroquois, their former enemies.

Some Susquehannock made it over to Pennsylvania and founded a community there, Conestoga Town. There they eeked out a living far removed from their former life, hiring themselves as labourers to adjoining farms. But in 1763, the last three dozen or so of true-blooded Susquehannock were massacred by the Paxton Boys, a militant group of white bad boys that killed whatever Native Americans they could get their hands on in retaliation for the recent French-Indian war. Less than two centuries after their first contact with the European settlers, the Susquehannock had ceased to exist. Had they fought off the white invaders instead of welcoming them as guests, that might not have happened—but then, history is full of ‘what ifs’, right? 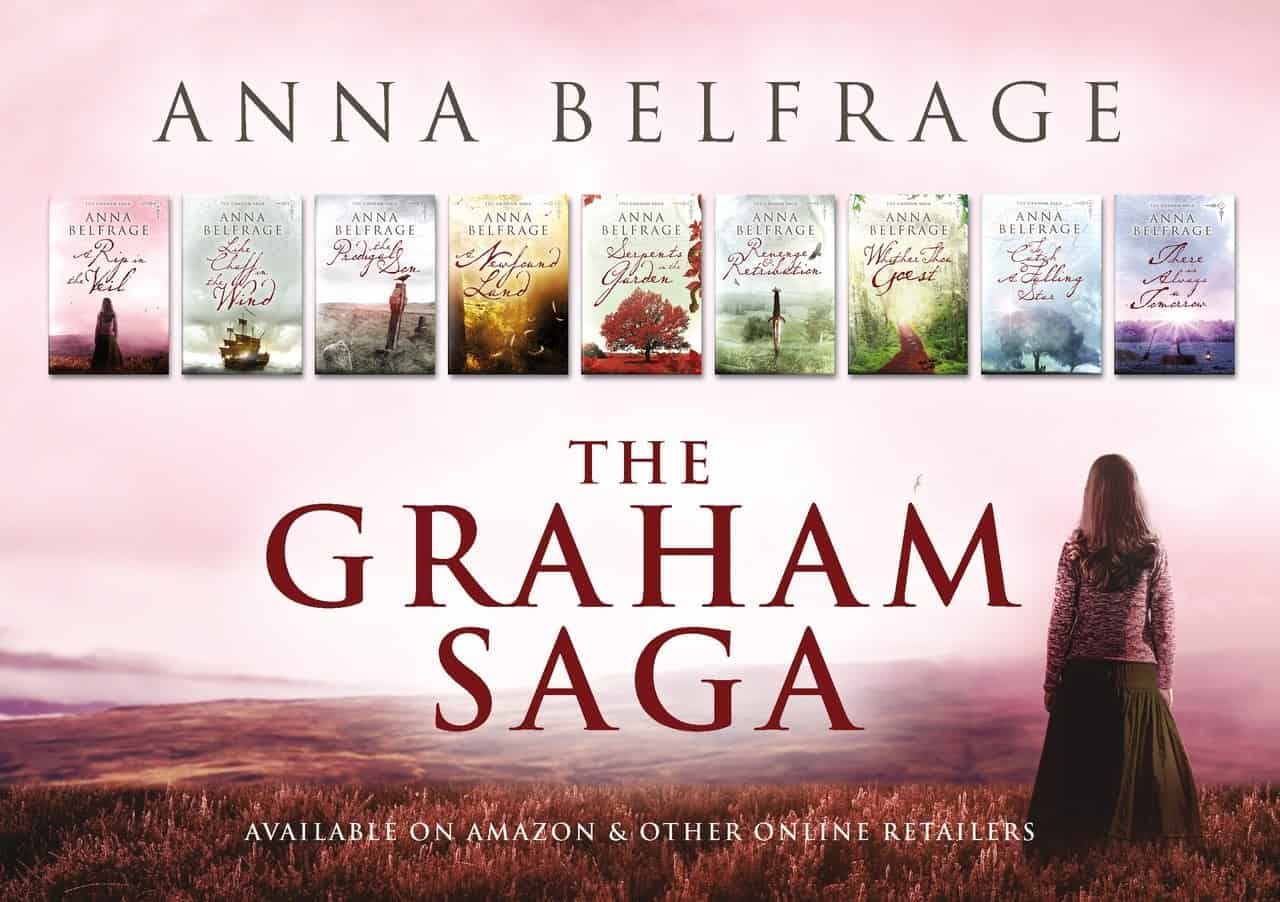 The Susquehannock play an important part in my series The Graham Saga. My male protagonist, Matthew Graham, is a devout Presbyterian, a veteran of the Commonwealth armies and a man who initially at least tends to see the world as black or white. Which is why I gifted him with Alex Lind, an opinionated modern woman who had the misfortune (or not)  of being in the wrong place at the wrong time, thereby being dragged three centuries back in time to land concussed and badly singed at an astounded Matthew’s feet.

Due to Matthew’s religious persuasions, the Graham family is forced to leave their homeland behind and immigrate to the Colony of Maryland where they establish cordial relationships with the nearby Susquehannock tribe. They help the natives, the natives help them. But as the tension between colonists and Indians increase, the fragile friendship between Matthew and Qaachow, a Susquehannock chief, is put under severe pressure.

The below excerpt is from A Newfound Land, the fourth book in The Graham Saga, which is when Qaachow first enters Matthew’s and Alex’s lives. 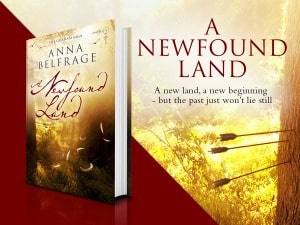 Alex didn’t see him until she had sat down on her normal perch, a fallen log just to the east of the clearing. Qaachow was sitting in absolute stillness a bit further on, his gaze locked on what Alex supposed had been the main house of the settlement but that now reminded her of an elongated tomb. She shivered at the thought; after all, to some extent it was.

Qaachow tilted his head to show he’d heard her but otherwise remained where he was.

“You come to think of your daughter,” he said, gesturing at the ‘RACHEL’ she had carved on a nearby tree. “Those thoughts do not intrude on mine.”

Alex sat back down again. Not that there was any possibility of her thinking about Rachel now, with this slim, half-naked Indian some yards away, but it would be rude to walk away and disturb his meditation again. He was gaunter than last time she’d seen him, more careworn. He shifted on his perch and the breechcloth rustled, releasing a fragrance of crushed pine needles.

“I sit here at times and remember the life that was. Before…” His low voice cut through the silence.

“Before we came,” she filled in, following the dancing beams of afternoon sunlight that fell in from the west to pattern the ground with eerily lifelike shades of that long gone existence.

“Yes, before John Smith brought the white man over.” He looked away through the screen of trees towards the river, barely visible from here. “He came to our village once.”

“I’m not that old.” He smiled. “I never met him in person, but my grandfather did. We should never have let you land,” he added in a darker voice. “We should have listened to our wary brethren of the north and pushed you back into the sea.”

Alex quietly agreed. Soon nothing would be left of the Indian way of life.

Qaachow gave her a look of grim amusement. “We could steal in like shadows in the night, and none of you would notice until you lay dying in your blood.”

Alex huddled together with physical pain at the thought. “But you won’t, will you? You won’t kill my babies.”

“Your people? Are there any other Indians we need to worry about?”

Qaachow shrugged. “This is our land. They will not touch you. But, elsewhere, white women and children will be slain, and their men will be killed slowly and in agony. The coming years will be bad, Mrs Graham, very bad.”

Alex nodded and bent to pick up a pine cone from where it lay on the shimmering green of the moss.

“I know. That’s why Matthew’s been called down to Providence.”

Qaachow looked away, saying something in his own language that sounded very sad. For some time he sat sunk in thoughts, eyes lost in the dappled shadow of the surrounding woods.

“I’ve never thanked you or your husband for what you did for my people, in particular for my wife.” Qaachow stood up in one fluid movement. He was an attractive man, Alex reflected, his hairless torso outlined with muscles without becoming too excessive. Long, beautiful hands, and a mouth that, when relaxed, was soft and tender – kissable. Their eyes met. For a couple of heartbeats he held her gaze, the shadow of a smile playing round his mouth.

Alex cleared her throat. “Your wife?”

“Thistledown-in-the-wind; it was her sister that died.”

“She’s very pretty,” Alex said, thinking of the young Indian woman with the thick braids – young enough to be his daughter, but apparently his wife. He seemed to see what she was thinking and smiled crookedly.

“I loved my first wife very much, and it took many moons before I wanted to look at another woman.” He stared off into the distance. “Morning Dream – always first in my heart.”

“Morning Dream, what a beautiful name.”

“As was she.” With a courteous nod in her direction, Qaachow blended into the surrounding trees.