…or the downside of bonding too much with your characters…

Today is the release date for the third book in my series The Wanderer. It is also the last book in the series, and as always, I am torn in two between pride at having completed yet another series and a desire to weep as it is time to say farewell to Jason and Helle. Okay, okay: those of you who know me well have likely worked out that I haven’t quite let them go—I never seem to be able to let my characters go—but this time round, the series will not go beyond three books. What further adventures Jason and Helle may have—assuming they survive A Flame through Eternity unscathed—will likely remain between them and me. Although Darius and Zadie may be given some insight into things in their book, tentatively titled No Wolf Howls Alone. 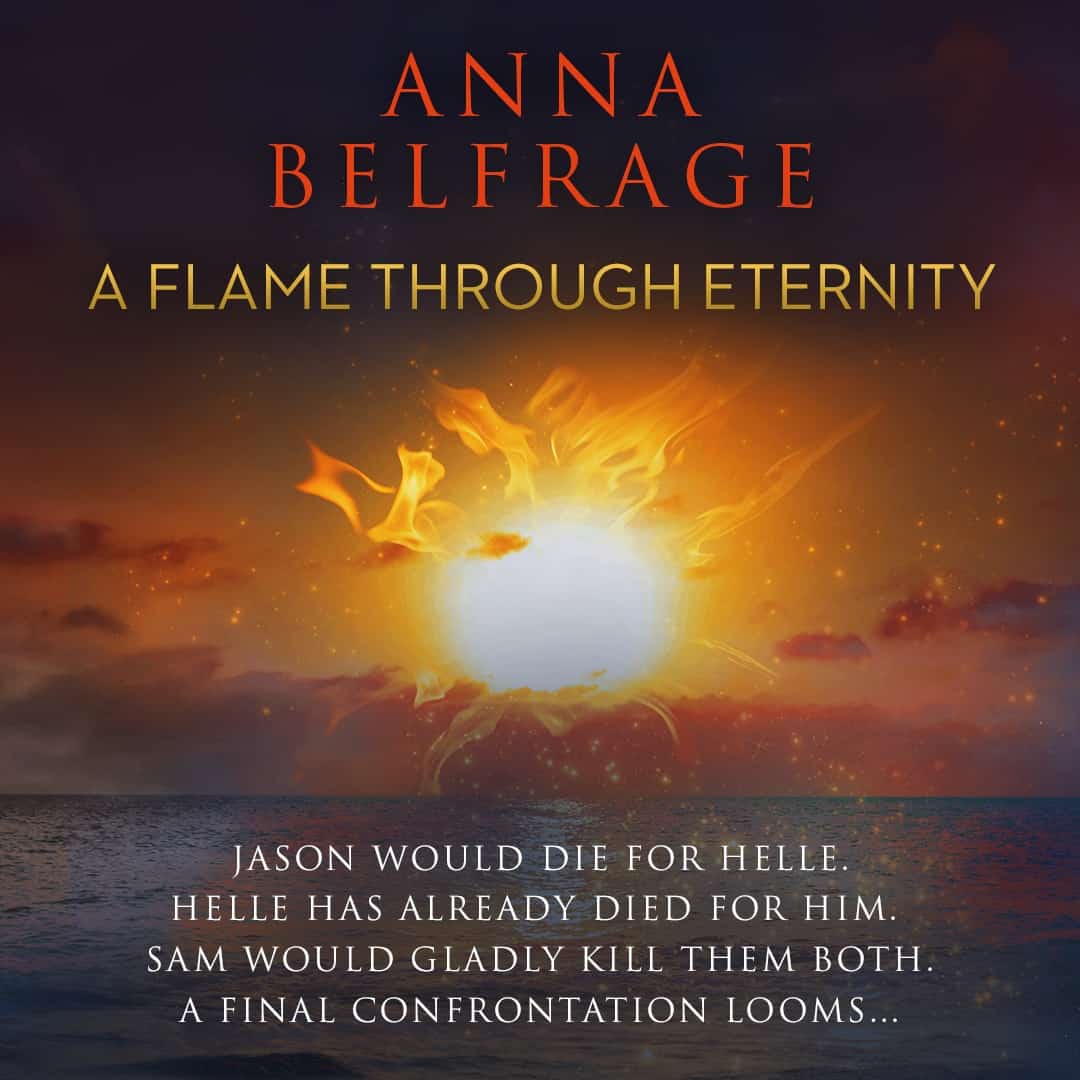 See what I am doing here? I am so aware of the fact that this is the last book about gorgeous, reincarnated Jason Morris and his equally wonderful (and reincarnated, although she has no memories whatsoever of her previous lives) Helle, that I am already thinking ahead, to other stories, other characters that may allow me a discreet future peek into the Morris household.

I am doing something similar when it comes to Alex and Matthew, protagonists of The Graham Saga. Indirectly, I carry them with me as I write the story of their grandson, Duncan. And Kit and Adam, my medieval characters, are suddenly on the move again, because Edward III has plans and he needs his former captain of the guard to do something for him—obviously something involving secrecy and danger and a stubborn Kit who absolutely refuses to let Adam go anywhere on his own. Mind you, just because I am plotting and writing, does not mean I intend to publish. Rather, these writing efforts are driven by my need to maintain contact with my characters, keep them very much alive in my heart and head.

“Alive?” Jason snorts. “Let me tell you, your brain is over-populated with all your invented peeps.”
He has a point. There are days when I can’t quite hear myself think because of all those voices. But the alternative—a silent mind with no Lord Roger Mortimer in one corner, no Matthew Graham in the other makes my gut twist. Hard.
“Of course,” Jason says. “We’re like family to you. All of us carry some small part of your soul with us, and should we scatter or fall permanently silent, then that little part is lost.”
I eye my reincarnated hero with some irritation: when did he qualify as a psychologist?
“Oh, Sigmund and I…” he begins and I wave him silent. Problem with having a hero who has lived plus fifty lives and remembers all of them is that he is scarily experienced and a veritable fount of knowledge on almost anything. He is also in danger of becoming mentally fragile, although in Jason’s case this risk is alleviated by the single constant in all those lives: his love for Helle, his dogged determination to find her again. Somehow. Somewhere.

Which brings us back to today’s release. Jason has found his Helle again. Yay! But the third member in this very, very ancient love & hate triangle is also here, except that Sam Woolf is more into the hate part of things… And so, the final act of this epic love story can begin. It started 3 000 years ago. It ends now. Who survives the final conflagration? I suggest you rush over and get the book. Now!

Me, I will retire to submerge myself in one of my new stories. That Darius is proving quite intriguing, and…
“Intriguing?” Jason hisses. “Intriguing? Have you any idea how many times he’s killed me over the centuries?”
Err…Yes, I do actually. And in difference to Jason, I also know why Darius has hated Jason so much. Poor Jason has no idea. Yet. But that story is as yet unwritten. Until then, I give you A Flame Through Eternity! (And have I mentioned it already has a Reader’s Favorite Five Star Seal? No? Well, it does 🙂 )

According to Helle Madsen, being the protagonist of a time-spanning epic love story has some things going for it, primarily Jason Morris. Because seriously, meeting up with your fated lover after 3 000 years apart is not bad—at all. Unfortunately, where Jason goes, there goes Sam Woolf, yet another very, very ancient acquaintance—with the fundamental difference that Sam is not into Happily Ever After. He’s into destruction, more specifically of Jason and Helle.

Helle may believe in second-chance love, but she sure doesn’t believe in reincarnation. Okay, she didn’t believe in stuff like that until she met Jason Morris a year or so ago. By now, she has accepted that sometimes impossible things are quite, quite possible—like an ancient princess being reborn as an ambitious financial analyst.

Finding Jason was like finding the part of her that had always been missing—a perfect match. But handling Sam Woolf, the reborn version of their ancient nemesis is something of a trial. No sooner do you have him well and surely beat, but up he bounces again. Sheesh, will it take an oak stake to permanently rid their lives of him?

Sam Woolf is a powerful adversary. Too powerful, even. Jason and Helle will need help from unexpected quarters to finally bring this tangled, ancient love-and-hate triangle to some sort of conclusion. Question is, will they survive the experience?

Buy it on Amazon!