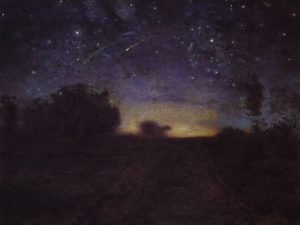 Right: How many readers are still with me after that opening, hey? Now and then, though, I must remind myself—and you—that I am Swedish and this is one of our most beloved poems by Victor Rydberg, one we hear quoted repeatedly over the weeks around Christmas. Why? Well, because it is about winter and cold and glittering stars and…the tomte.(Our very own Swedish gnome, as Swedish as the leprechaun is Irish)

A rough translation of the above would go like this:

Midwinter night and the cold is harsh
The stars they sparkle and glimmer
Everyone sleeps in the lonely farm
So deeply do they sleep through the midnight hour
Silently, the moon traverses the winter sky,
The snow lies white on spruce and pine
The snow lies white on the homestead’s roof
Only the tomte is awake. 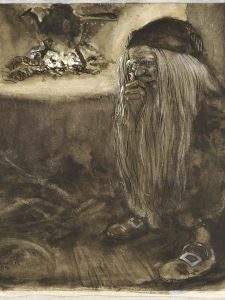 Now, a Swedish tomte is one of those folklore creatures one must approach with respect and wariness. These days, we tend to equate our tomte with dear old Santa, a jolly gent dressed in red with blossoming cheeks, benign eyes and a flowing white beard. Ha! The traditional Swedish tomte does not do red. Seeing as he is as old as the rocks, he probably has a long, long beard, but it is not a pristine white—rather a tangled grey.

Until Jenny Nyström decided to do a radical makeover on the tomte in the late 19th century, this creature was one everyone knew existed, few had seen and even fewer wanted to talk about. Every single farm in Sweden had its own resident tomte, and depending on how well he was treated, the farm thrived. Or it didn’t. A tomte never moved. If the family left, it left without the tomte. If the farm was abandoned, the tomte remained, incapable of leaving the place where the rocks knew his name, the silent forests echoed with his memories and the burbling waters whispered stories to him. 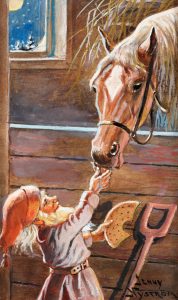 In difference to Jenny Nyström’s apple-cheeked tomte with a bright red cap and a generally benign and extrovert air, the traditional tomte excelled at camouflage. A scurrying shadow, and you whipped round to see what it was that had moved but saw nothing but a darker shadow by the barn door. And there, what was that? Yes, something definitely moved, or was it just a figment of imagination, because that really looked like an old tree stump. The tomte, you see, did not want to be seen—at least not by humans. It was another thing entirely with animals: the tomte was more than happy to spend time in the stables with the oxen and the horses, the cows, pigs and sheep. Probably because the beasts didn’t talk all that much. 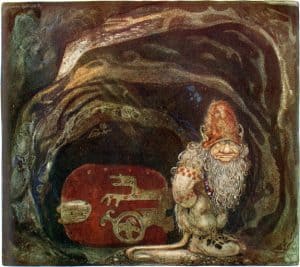 The wise mistress ensured to keep the tomte happy. The odd rind of cheese, a slice or two of bread dipped in pork drippings, now and then an apple or a small bowl of beer. And when Christmas loomed, the tomte expected the good stuff, something warm and filling and sweet to take the edge of the chilly nights. In this case, the good stuff was a steaming bowl of rice porridge. I can almost see you smirk: a bowl of porridge? Seriously? This tomte dude has low expectations. Except that he doesn’t. In medieval times, rice porridge was luxury food. Rice was imported, and further to that, rice porridge is made by boiling the round-kernel rice in milk. Milk was not something readily available—what the cows gave was mostly used to make cheese and in some cases butter. Plus, of course, few cows gave all that much milk in December as their calves were generally weaned by then. However, the wise mistress ensured she had at least one cow (or goat—the tomte was not picky as to what sort of milk was used) that would give her enough milk with which to make the rice porridge.

So: round-kernel rice, milk, and then a piece of cinnamon bark—yet another luxury item. Plus, the porridge was sweetened by adding sugar. Now sugar was really, really expensive in the good old days. It remained really, really expensive well into the 19th century when the cultivations of sugar beets made local sugar production possible up here in the north. But no matter how expensive, the rice porridge demanded sugar to make it as tasty as possible.

Once the rice porridge was made (and I see the mistress stirring while her children stand expectantly around her, hoping that some of that white creamy goodness will land in their bowls) a bowl was heaped with it and someone took it outside, setting it down somewhere close to the barn for the tomte. Inevitably, come next day the porridge was all gone, irrefutable proof that the tomte was still there and thriving. 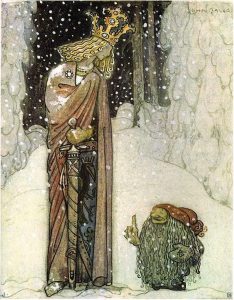 These days, the tomte leads a waning existence. The Swedes have become city-dwellers and the expanses of forests hide uncountable abandoned farms, the little clearings reclaimed by the woods, the buildings slowly rotting away. In some places, all that remains are the stone foundations, a general outline of what was once a barn or a cottage. There are no beasts in the stalls. No crops are grown, no one harvests the apples on the overgrown orchard trees. The raspberry brambles have long since gone wild, and where once stood a neat kitchen garden, now it is mostly ground alder. Where once there were children and bustling life, now there is only stillness and a sad whiff of decay. And yet, as I stand among the moss-covered stones, for an instant I see something darting out from behind the ancient oak. A glimpse of bright eyes, of a cap as grey as the beard, and then it is gone, disappearing into the shadows of the wood. The tomte, it seems, remains. As silent and watchful as ever, he lives on, likely waiting and waiting for someone to return back home and bring light and warmth and the yearly plate of porridge with them!

9 thoughts on “Of ancient sprites and how to bribe them”