On misty mornings, when the fog curls lazily along the water’s edge and brushes gently over trees and shrubs, the grazing horses can, for a moment, be taken for something else: sun filters down to make their damp hides shimmer, and when the large blue roan turns this way, one can for an instant see (or imagine) a horn, a twisted thing of polished ivory that ends in a lethal point. That is as close as I have ever got to a unicorn. And yes, I know the roan isn’t a unicorn but just before the fog evaporates there it stands: a magical beast that has for centuries titillated the human imagination.

While modern man generally does not believe in unicorns, until relatively recently a lot of people did believe they existed. A unicorn was no more unusual than an elephant or a rhinoceros. And just like a rhinoceros, a unicorn had a horn. Just like the horn of rhinoceros, the horn of a unicorn was considered to be chock-full of beneficial substances. Grind up some unicorn horn and you had the ultimate remedy for everything from poison to impotency. Legends described the unicorn as dangerous and proud beasts that could only be tamed by the purity of a young virgin. (Hmmm) In some ancient descriptions, unicorns were extremely colourful creatures. In others, they were that classical shimmering white which we mostly associate with unicorns. Well, unless you’ve bought rainbow-coloured My Little Pony unicorns for your daughter… 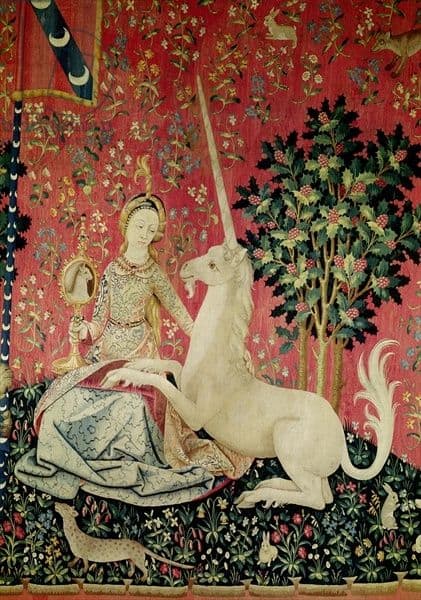 For a long, long time, no one questioned the existence of the unicorn. Rich men would gladly pay a minor fortune for an authentic unicorn horn and proudly display it in their home. In the 17th century, no gentleman’s collection of curiosities was complete without such a horn. Interestingly enough, while unicorns were thought to live in the unexplored wilds of Asia, the horns mostly came from the north.

Now, while most people believed in unicorns, a select group did not really care if they existed or not: those that traded in unicorn horns knew for a fact that the beautiful twisted horns they sold at such great profit did not come from a fabled four-footed beast. No, that much-desired horn was a tusk—more specifically a narwhal tusk.

For centuries, northern fishermen and traders earned a lot of money peddling narwhal tusks as unicorn horns. Already the good old Vikings realised that the tusks brought in much more money when they were presented as unicorn horns. Did the Vikings believe in unicorns? No idea—but they did not let such things as truth stand in the way of a good trade.

Some merchants remained endearingly naïve. Take Anthony Jenkinson, for example. This 16th century trader and explorer is famous for being one of the first Europeans to be given access to Russia. Representing the Muscovy Company, Mr Jenkinson had a cordial—and mutually beneficial—relationship with Tsar Ivan the Terrible. He was also of the firm opinion that opening  safe trade routes between England and Russia would not only give England access to a huge market for their goods  but also to an endless supply of timber, furs and…taa-daa…unicorn horns, seeing as everyone knew unicorns were plentiful in the Russian wilds. 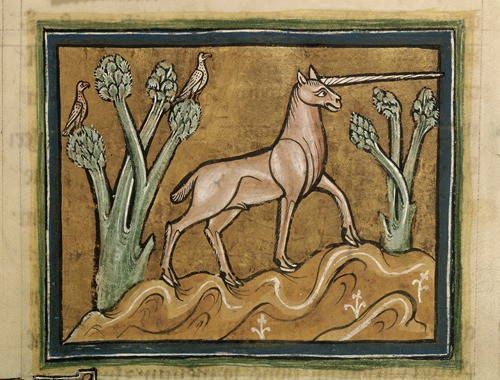 Elizabeth I did not buy into the unicorn thing—but she had the utmost respect for Mr Jenkinson and his invaluable connections in Russia. Jenkinson’s maps and surviving letters offer fantastic insight into the life and woes of Russia under Ivan the Terrible. They offer little when it comes to unicorns, which is not exactly surprising.

Anyway: well into the 17th century, the lucrative trade in narwhal tusks a.k.a. unicorn horns thrived. Okay, so among the more educated there was a growing scepticism, especially after the first non-Scandinavian European explorers came face to face with a narwhal and sent descriptions of this creature back home. The more scientific among the apothecaries were beginning to doubt the medicinal power of ground unicorn horn. After all, man was entering the age of rational thought, the Early Modern Age applauded education, science and empirical research while scoffing at myths.

The interesting thing about myths and legends is that they can be difficult to disprove. A bit like the big, big issue “does God exist?”, how does one go about proving a myth is false? God, as we know, must be taken on faith: we cannot prove He exists, nor can we prove He does not. Likewise, in the 17th century no one could adamantly state that unicorns were figments of imagination. There were too many unexplored corners of the world and who was to know if there might not be a unicorn or two somewhere in the Ural mountains like Anthony Jenkinson suspected? Plus, of course, there was that most tangible proof of their existence: the seemingly endless supply of horns that were still sold at high prices. And then three overly enthusiastic Danish scientists ruined the whole unicorn horn market, indirectly killing the myth of the unicorn as a living, breathing beast along the way.

First out was Caspar Bartholin, a well-travelled and educated man who was a professor in medicine at the University of Copenhagen. Caspar had something of a fixation on chambers of curiosities and had spent many a happy hour perusing the various collections of friends and colleagues he came across during his travels. One thing that bothered him a bit was that the so proudly displayed alicorns (an alicorn is the horn of a winged unicorn, the thing to have for the fervent 17th century collector) and unicorn horns were remarkably similar to the narwhal tusks that arrived regularly in Copenhagen from Greenland.

Caspar chose not to say something—but he discussed the matter with his brother-in-law, the avid antiquarian and collector Ole Worm, and Ole went a tad wild and crazy verifying Caspar’s theories. His conclusion: the horns so proudly labelled as coming from alicorns or unicorns were, in fact, narwhal tusks. 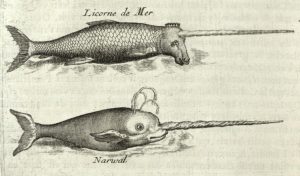 Oh, dear, oh dear! What had Ole done? In one fell swoop, he had killed the lucrative trade in narwhal tusks. No, no, no, Thomas Bartholin (Caspar’s son) said. Yes, the horns were aquatic to their nature, yes, they came from the narwhal, but what was to say these strange teeth were not every bit as potent as the fabled unicorn horns? In fact, Thomas Bartholin went on to say, maybe the four-footed unicorn had never existed, maybe the only unicorn around was the narwhal, now hastily rebranded the Greenland Unicorn?

The world at large was struck mute by Bartholin’s theories. Okay, okay: major exaggeration: Most of the world did not care one way or the other, but what Bartholin had done was to confirm that all those horns so proudly displayed did not come from unicorns, winged or not. Instead, they came from a relatively ugly aquatic creature that did not shimmer in the sunlight or have a penchant for virgins. Nor did the narwhal all that often leave the water to wiggle about and dip its tusk in poisoned wells, thereby purifying them.

“Hold on,” Bartholin said, “the narwhal tusk has amazing medical properties. It can be used to cure a number of ailments! I tell you, gentlemen, the Greenland Unicorn is as magical as they come!” He also hastened to add that just because so far no one had ever seen a terrestrial unicorn that did not mean they did not exist—but the proud medical profession had no need to look for these creatures as the tusk of the sea unicorn contained incredibly potent substances.

Whether or not those of the medical profession believed Bartholin we do not know. But Bartholin himself did brisk trade in unicorn powder, ordaining it to his patients to cure a number of ailments. I imagine apothecaries and physicians in general continued doing the same: the profit was good, the supply was steady and the patients did not expire from the doses of “unicorn horn”.

Not until Carl Linnaeus classified the narwhal as being a whale and not a unicorn did the myth of the sea unicorn die. This he did in the early 18th century, and by then apothecaries and physicians had long since moved on to other drugs, scoffing at the imagined properties of the sea unicorn. And so our narwhal was yet again rebranded, dragged down a step or two from its exalted state as a mythical, if aquatic, unicorn to an everyday whale. Not that the narwhal cared… 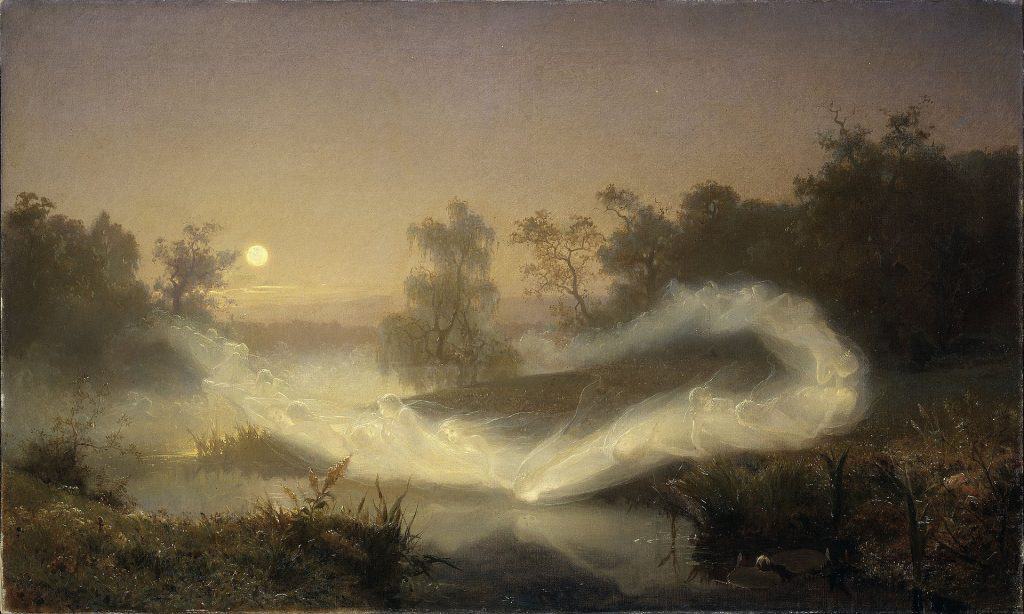 Today, there remain few unexplored pockets of the world. Should unicorns exist, we should have come upon one by now. Someone should have caught sight of a shimmering, prancing creature, its hide sparkling like diamonds, its horn catching the light of the sun. Sadly, no one has, which I suppose means we must conclude unicorns really don’t exist. Unless, of course, you join me on my early morning walks when tendrils of fog curl and dance round our feet. There, in that moment, magic hovers over the ground, it caresses the trees and shrubs, it touches beast and human alike and for a moment everything is possible. Everything – from winged unicorns to dancing elves.

***************************
This post was inspired by the tail-end of an interview with Dick Harrison, Swedish historian speaking about Anthony Jenkinson and his interest in unicorn horns. Mr Jenkinson deserves his own post, fascinating gent that he is….

Should you want to read an EXCELLENT essay about the Bartholins, Mr Worm and the Greenland Unicorn, I recommend that you visit the Public Domain Review