In 1271 or so, Roger de Mortimer and his wife Joyce de la Zouche welcomed a son to their home. For those who know of my fascination with the Roger Mortimer, the man who ruled England for four years or so and was hanged in 1330, I must hasten to clarify that this namesake belonged to another branch on the Mortimer tree, namely that part of the family that had Richard’s Castle as their seat rather than Wigmore. Richard’s Castle lies on the border of Herefordshire and Shropshire and was originally constructed by a Norman knight names Richard FitzScrob (hence, one assumes, the singularly unimaginative name) whose descendants held onto it for a couple of generations before it passed to the Mortimers. The Mortimers, in turn, held onto it until a decade or so into the 14th century after which it passed to the Talbot family via marriage.

Anyway: let us not get ahead of ourselves. As I said, in 1271, a little boy was born who was baptised Hugh after his grandfather. At the time, Roger de Mortimer had more lands than those abutting his family seat. Specifically, through the machinations of his wife’s father, he was the lord of a manor in Northamptonshire called Whilton. Thing is, this manor really should have belonged to Joyce’s daughter from her first marriage, Felicia, as it was Felicia’s paternal ancestors who owned Whilton. But Joyce was young when Felicia’s father died—young and in need of a new husband, which was why her daddy was determined to secure Whilton as her dower. How all that came about, you can read more of here. The legalities concerning who actually owned Whilton manor is the longest running legal case in English history, stretching over well over a century. After all, while Felicia was defrauded by her mother and maternal grandfather, she did have other people determined to fight her corner, which is why she made claim to her parental lands.

Throughout most of Roger de Mortimer’s and Joyce’s married life, the ownership of Whilton was a contested case, albeit that the Mortimer succeeded in having their title to the land recognised. Felicia was not about to back down, and once she reached her majority of age she brought a new suit, now aided by her new husband, Philip Montgomery. Philip had every intention of securing Whilton for his wife—for himself—and early in 1287, he managed to overturn the previous ruling. Whilton was once again back in the hands of Felicia. As Roger de Mortimer died in some months later, no one contested this ruling. Joyce had her hands full managing her dower—a lady had to keep her wits around after the death of her lord to ensure she wasn’t cheated—and Hugh was a minor. As such, he could not contest the ruling himself.

Hugh was around fifteen or so at the time, and I imagine he had other things on his mind than lands and income. Like most young boys, he was more into the present than in planning for the future, so I imagine he preferred martial training, hunting  and falconry to the somewhat more tedious pursuit of reviewing his accounts. 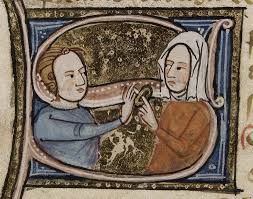 We know next to nothing about Hugh. We know even less about the lady he married in 1289, a certain Matilda. I imagine she would not have been a destitute bombshell—medieval peeps belonging to the upper classes generally wed for other reasons than hot attraction and love. We can therefore probably assume that Matilda brought something to the marriage that Hugh wanted. Whether he also wanted her is unknown, but whatever the case, they did manage to have at least two children—two recorded daughters survived into adulthood. There seems to have been a third child, yet another daughter, but if so, she either died young or dropped out of sight at a very young age.

As to Whilton, Hugh’s efforts were neatly foiled by the opposition. In fact, in 1299 the king himself interceded on behalf of Felicia and her offspring,  essentially stating that in this matter he expected the rights of Felicia to be upheld.

Other than marrying and begetting—and blowing new life into the infected feud with his half-sister Felicia over the ownership of Whilton—Hugh spent most of his time serving the king. In the closing years of the 13th century, that meant spending time in Scotland, with Edward I determined to bring that part of Great Britain under his sway, thereby completing the work of “unification” he had begun with the conquest of Wales in the 1280s.

In the year 1300, King Edward led his host north.
“There,” he said, pointing at Caerlaverock Castle, “besiege it, take it. Now.” His loyal men were not about to question his orders. A mighty force consisting of close to 3 000 men descended on the castle, a rather original triangular construction that was defended by somewhere around 80 men or so. I imagine the garrison swallowing nervously as they studied the Englishmen set up camp.
“Oh, shit,” they may have muttered. “here they come again…” The English were something of a huge thistle up the Scottish butt at the time, would continue to be so for quite a few years more, no matter that William Wallace was grimly determined to lead Scotland out of England’s shadow and into the sunlit days of freedom and self-governance. Thing is, Edward was just as determined to remain a dark and ominous shadow, a puppet-master yanking the Scottish strings as it suited him. 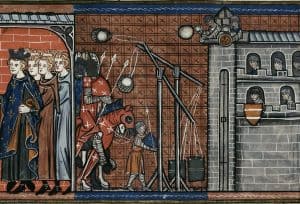 No matter the bravery of the defendants, no matter the impressive walls of the little Caerlaverock Castle, the odds were distinctly in favour of the English. It took them days to overcome the castle, no more. On the orders of Edward, some of the garrison were hanged, some were left alive to spread the word that the English king was a king best not affronted. As we all know, the Scots were ever a stubborn and uncowed people: they may have cowered under Edward’s rage and power, but ultimately they did beat the English—but that was several years in the future.

Hugh de Mortimer was present at the siege. We know this because there is a surviving description of the siege which includes illustrations of all the banners present, the various noblemen to whom the banners belonged listed by name. In general, the account of the Siege of Caerlaverock is obviously pro-English, but the author does give the defenders their due, clearly impressed by their bravery.

Our Hugh is mentioned as follows in the document: Hugh de Mortimer — well knew he how to win him friends — was there, raising high a crimson banner charged with fesses two of vair.

If we take this text at face value, Hug seems to have been a nice dude, a guy who lived surrounded by friends. However, there are those that say that there is a huge pinch of sarcasm in this line. In fact, some say, Hugh was probably not the kind of man who won himself friends easily. Rather he was given to bullying people into doing what served him best. Just to clarify here: we do not KNOW if Hugh was a nasty sort who used his fists to get what he wanted. Some of his actions rather indicate he was a fair lord. Later events, however, seem to indicate he wasn’t the nicest of men—at least not to his wife. 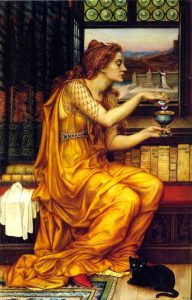 You see, in 1304, Hugh died. Most suddenly. In the prime of his life. Cause of death: poison. Administrator of said poison? Well, it seems to have been his wife, Matilda. Oh dear, oh dear: here we have a woman evil enough to resort to poison to rid the world of her man. Or maybe we had a woman who just couldn’t take it anymore. We do not know. But I think we can all agree that unless Matilda was some sort of psychopath, she must have had what she considered valid reasons to rid herself of her husband.

Whatever the case, Hugh was declared murdered. Everyone expected his lady wife to follow him into the hereafter relatively promptly—the medieval legal system has as little liking for murderers as we do, and capital punishment was usually meted out when one killed someone. This is where things become somewhat interesting: Matilda was pardoned of her crime some six months later. Just like that. “Right, you’re free to go, have a great life and all that, but do NOT poison anyone else, you hear?”

The reason for the pardon was probably two-fold: I am guessing people knew Hugh wasn’t the nicest of men and therefore felt sorry for Matilda. More importantly, Matilda was close to Edward I’s second wife, Marguerite of France, and it seems the young queen exerted considerable influence to have Matilda pardoned. However, Marguerite would not have succeeded unless she could give good reasons for such leniency. It seems likely that the arguments in favour of sparing Matilda must have been based on how Hugh had treated her.

Some sources insinuate Hugh was not the first person Matilda had helped over the great divide by the use of poison. In fact, it is seen as indicative of her extracurricular activities that she did not long survive her husband, despite the royal pardon. Once Edward I was dead in 1307, Marguerite was no longer in a position to protect Matilda—or so some say—who therefore suffered a hasty death. This, however, is speculation. We do not know how Matilda died. We just know that she did die in 1308.

With Hugh dead, the Mortimer branch of Richard’s Castle was no more. His daughters married—the eldest, Joan, was already wed at the time of his death to a Thomas Bykenore, and would later on go on to marry a Richard Talbot, bringing her new husband Richard’s Castle. The younger daughter, Margaret, would wed a certain Geoffrey of Cornwall who was the great-grandson of Richard, Earl of Cornwall and king of the Germans, albeit on the wrong side of the blanket.

And as to that claim on Whilton, well, the Mortimers never got that particular manor back. Not that Felicia left a neatly settled matter behind her: she too was married twice, she too had one child by each marriage. Some years down the line, the ownership to Whilton would yet again be disputed—heatedly. But that, I think, is a story for another day.