In 1355, Pedro I of Castile, a.k.a. Pedro the Cruel (or Just, depending on your take on things) and his long-time mistress, Maria de Padilla, welcomed their third child into the world. Yet another daughter, and I imagine Pedro would have preferred a son to the newborn Isabel that lay at her mother’s breast.

Things were a bit complicated at the time: first of all, there were uncertainties as to the legal status of the Pedro-Maria union. Had he married his mistress in secret prior to 1353 or not? If not, then he was wed to Blanche of Bourbon, the very unhappy French princess who married him in 1353, had three days with her husband before he returned to the open arms of Maria, and who had since then effectively been Pedro’s captive. If Blanche was Pedro’s wife, then Isabel, just like her sisters, was illegitimate. If, on the other hand, Pedro had married Maria before marrying Blanche, then he had committed the foul sin of bigamy.

Pedro’s detractors accused him of far worse sins than bigamy. His supporters likely couldn’t care less about the fate of poor Blanche. And they weren’t all that interested in Isabel, because Pedro became father twice in 1355: his other child, a son, was born to his wife Juana de Castro, whom he had wed a year or so earlier, insisting his marriage to Blanche was null and void (and that he wasn’t married to Maria, one assumes). In the eyes of Pedro’s court, baby Juan was a potential heir to the crown and much more important than baby Isabel. What Maria and Juana may have thought of the man who made them both pregnant at roughly the same time is unknown.

So there you have it: Castile in 1355 had one king, two legally wed queens and one perhaps-queen, whom some whispered had married the king in secret years ago. Very, very complicated, isn’t it? Blanche, of course, was out of the picture and would spend the rest of her life behind walls. By 1355, it seems Pedro was no longer all that interested in Juana either, son or no son. But in difference to Blanche, whose family was in France and therefore was virtually defenceless, Juana de Castro was a well-connected lady and Pedro was wary of riling her numerous relatives. So instead of locking her up, he arranged for a separation, sweetening the offer with lands and castles. Juana was wise enough to take what was offered and retired from court – even if she continued referring to herself as queen of Castile and Leon.

Once Juana was out of the way, Pedro returned to his Maria and their children. Yes, baby Juan was the official heir, but when Maria presented Pedro with a son in 1359, the king began to have second thoughts about who should succeed him. In 1361, he ordered poor Blanche to be murdered so as to clear the way for an official marriage with Maria, whom he intended to crown his queen. But Maria fell ill (some say the plague, but the chronicles just list an “ailment”) and died, leaving Pedro totally devastated.

In the aftermath of Maria’s death, Pedro wept. He tore his hair, his clothes, he screamed for his one love, his true love. A year later, he stood before the assembled nobles of his kingdom and announced that he had only had one wife—Maria, whom he had wed in secret all those years ago. Eh…what? Yes, he insisted, in his heart and soul, he had wed Maria long before Blanche entered the picture. Most touching. Well, not so much for poor, dead Blanche, but Pedro’s nobles decided there and then that if their king declared he’d been married to Maria, then so he had. In one fell swoop, Isabel and her siblings became legitimate. Their half-brother, Infante Juan, was just as quickly declared illegitimate…

However, Pedro’s matrimonial issues were but the tip of the iceberg. Below the surface simmered the constant threat of rebellion, with more and more of Pedro’s nobles siding with his half-brother, Enrique de Trastamara. This Enrique was as ruthless, as harsh, as Pedro—but he comes across as somewhat more stable. He was the son of Alfonso XI and his long-time mistress, Leonor, and while Enrique had been raised at court together with all his siblings and with his doting father a constant presence, Pedro had grown up away from court, accompanied by his bitter mother, Alfonso’s spurned wife. Where Pedro had few, if any, personal friends among his nobles, Enrique had many—and he also had a number of younger brothers, eager to support him. Plus, after Pedro had treated Blanche so cruelly, Enrique could count on the support of both France and Aragón.

As you all probably know, 14th century Europe is defined by one very long-drawn conflict: the Hundred Years’ War between France and England. So, obviously, if France supported Enrique, England was going to support Pedro. Plus, Pedro and Edward III were related: Edward III’s grandmother was the sister of Pedro’s great-great-grandfather (although, if we’re going to be correct, Pedro was just as related to the French king and the Aragonese king…). 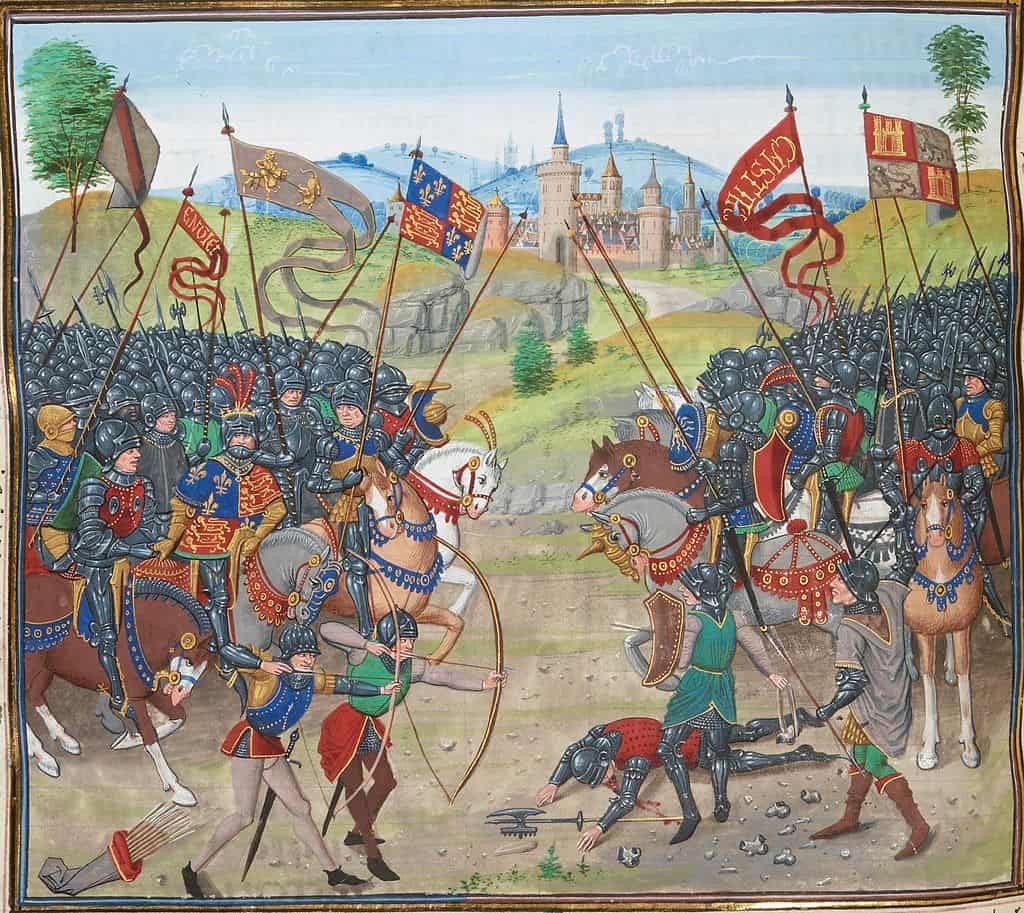 Things exploded into open conflict. Isabel and her sisters watched their father ride out to war, and one day in 1369 his fate caught up with him and Pedro was no more. Instead, Enrique was proclaimed king, first of the Trastamara dynasty.  Constanza and Isabel fled, head over heels, to the English-controlled Guyenne. Where until recently Pedro’s daughters had been princesses, now they had become liabilities. And possibilities. After all, an ambitious younger son might well marry them to claim the throne of Castile through them. And where did we have any such ambitious sons? In England, dear peeps, where Edward III and his wife Philippa had filled the royal nursery with many handsome, ambitious sons.

Well before Pedro’s death, Edward III and the Castilian king had entered into wedding negotiations. The eldest of Pedro’s available daughters (one had already taken holy orders), Constanza, was snapped up by John of Gaunt. Here was a man who was rich and educated, brave and competent—and who dearly desired a crown to cap things off. I have already written about John and Constanza, but in brief theirs was not a love match. After all, throughout most of their marriage, John spent most of his time and ardour with his long-time mistress, Katherine Swynford. But they did have a daughter, Catalina, and in the fullness of time, John’s ambitions would be indirectly fulfilled when his daughter married Enrique’s son and became the mother of a future king of Castile.

Isabel accompanied her older sister to England. And two years later, our Isabel was married to Edmund of Langley, John’s younger brother. She was seventeen. Her groom was thirty-two. Rather old for a first-time marriage, but maybe Edmund (or rather Edmund’s father) had been holding out for a princess bride. After all, Edward III was keen to marry his sons to women of wealth and/or power. Didn’t work out too well for his second son, Lionel, who was married to an Italian heiress. Turns out, it wouldn’t work out all that well for Edmund either.

I suspect Isabel and Edmund were mismatched. She seems to have been a woman of passion and strong opinions – from what little we know about her, she comes across as more forceful than her older sister. I also think it was difficult for a young woman accustomed to the heat and light of Andalucía to relocate to cold and wet England. Maybe she was homesick. Maybe she was just bored stiff. Whatever the case, according to contemporary chronicles, some years into the marriage—and after presenting her husband with one son in 1373 and a daughter in 1374—our Isabel found ways to amuse herself. You see, our princess was accused of having “loose morals”, which probably means she enjoyed the proximity of other men than her husband.

Edmund must have been displeased. Very displeased. As he was a loyal son to his father, he was often dispatched abroad to lead one group of men or the other in the ongoing wars, which means his dear lady wife remained in England all alone. Maybe this added to the distance between them. Or maybe it was just as simple as Isabel falling in love elsewhere. Not the done thing, back then, but by all accounts our Castilian princess found a lot more pleasure in the arms of John Holland than in those of her own husband.

John Holland, Duke of Exeter and half-brother to the future king, Richard II, was a temperamental, flamboyant man. Just what Isabel desired, apparently. Did they love each other, these two fiery peeps? No idea, but as some say their affair began as early as 1374 and likely continued for a decade it must have been more than a passing fling.

In 1385, Isabel gave birth to a son. Twelve years his eldest brother’s junior, this baby boy was named Richard of Conisbrough. One must hope his mother loved him dearly as his legal father, Edmund, seems to have pretended he didn’t exist. He gave nothing to his youngest son, there was nothing set aside for him in Edmund’s will, and Richard’s older brother was equally tight-fisted when it came to Richard. It was therefore fortunate for our young man that he had Richard II as his godfather. (And if we assume John Holland did father Isabel’s second son, then Richard II would have been the boy’s natural uncle) He was even more fortunate in his mother, who on her deathbed made the king her heir and begged him to take care of her youngest son and give him something to live on.

Isabel died in 1392. Her youngest son would go on to serve his king, would in the fullness of time inherit Edmund of Langley’s titles and lands, would father a son (also named Richard) before he was executed for treason. And his son, in turn, was one of the shakers and movers during the bloody War of the Roses. Richard of York, grandson to Isabel, would never himself wear the English crown. But two of his sons would, which is how the bloodlines of Pedro the Cruel (or Just, remember?) ended up firmly seated on the English throne. It is somewhat more doubtful if Edward IV and Richard III also had some of Edmund of Langley’s genes—but Isabel is not around to tell us the truth, so we will never really know.