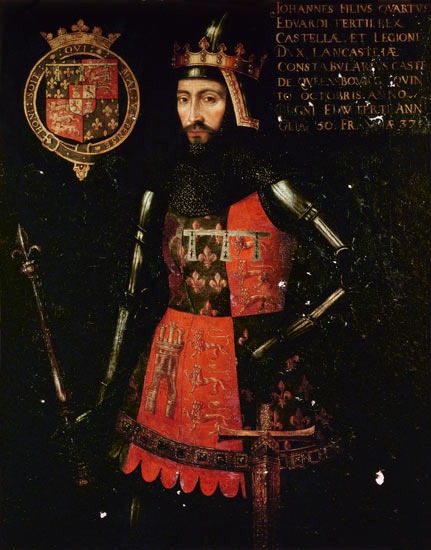 Sometimes I find myself considering the impact of John of Gaunt on medieval Europe—as one does, right? I’m going to come clean right at the start and say I rather admire this gent, whom I perceive as educated, intelligent, brave, loyal and very ambitious. Extremely ambitious, even. But not so ambitious as to want to replace his young nephew, Richard II on the throne of England (although I suspect he must have toyed with the idea, at least occasionally). No, John set his sight on another throne—that of Castile.
Obviously, John had no personal claim on the Castilian throne. But his second wife, Constanza, most definitely did. Constanza was the daughter of Pedro I of Castile, the not-so-nice man who locked up his French wife, murdered various relatives and who in 1369 ended up murdered himself by his half-brother Enrique Trastámara, bastard son to Pedro´s father, Alfonso XI.
Enrique claimed the Castilian throne by conquest, and for some years Constanza, at the time of her father’s death all of fifteen, was kept under lock and key. But in 1371 Enrique felt safe enough on his throne to let her go—as long as she left Castile. Besides, from Enrique’s perspective Constanza was no major threat—she was as much as a bastard as he was. Erm…There was a difference: Pedro had formally legitimised his children by Maria de Padilla his long-term mistress. Alfonso XI had never legitimised Enrique and his siblings. After all, why should he? Alfonso already had a legitimate heir in Pedro.
Anyway: At the time, John of Gaunt had just lost his first wife. The English had actively supported Pedro in the civil war that had devastated Castile—the Black Prince himself had led the combined Anglo-Castilian troops to victory at Nájera—and it was as clear as the day was bright to the English that Enrique was a usurper. The rightful heir to Pedro’s throne was Constanza, his eldest surviving daughter. Which was why John of Gaunt was all for marrying the Castilian infanta, with Edward III’s blessing.
John and Constanza were wed in 1371. In 1372, Edward III proclaimed them to be the rightful King and Queen of Castile. Obviously, Enrique was none too thrilled. His kingdom was anything but pacified, supporters of Pedro’s daughter crawling out of the woodwork at regular intervals. John, however, was delighted with his new title. As to his new wife, one gets the feeling there was not much more than cordial affection between John and Constanza, but John did his duty in bed and in 1373 Constanza was delivered of a little girl, Catalina (or Catherine).
A year later a little son was born, but he died while still a baby. There would be no more children. John’s carnal desires leaned towards Katherine Swynford rather than his Castilian wife. With Constanza, he shared ambition rather than passion, as determined as his wife to somehow reclaim her rightful throne.
At the time, England was in the midst of the Hundred Years’ War against France. The French had supported Enrique of Trastámara which per definition meant the English supported whoever was against Enrique. By 1379 Enrique was dead and the throne passed to his son, Juan I. This did not please either John or Constanza.

When Juan tried to claim the Portuguese throne through the rights of his wife, he alienated this neighbouring realm and its new king, Joao I. Our Portuguese monarch was well aware of Castile’s superior strength which was why in 1386 Portugal entered into an alliance with England, further reinforced by the marriage of John of Gaunt’s eldest daughter, Philippa, to Joao. (As an aside: John, Joao and Juan – same name, different languages…) The plan was for Portugal and England to join forces and oust Juan and in 1386 John, Constanza and Catalina therefore travelled to La Coruña in Galicia, from there to triumphantly ride south and crush Juan with the help of Joao.
Things didn’t quite work out like that. Juan was not about to give up without a fight, and it soon became apparent that the sides were well-matched, i.e. this could become a very long war. So when Juan proposed a peaceful solution, all the involved parties were inclined to listen.

Juan suggested that John of Gaunt and his wife renounce their claims to the Castilian throne. In return, Juan would agree to a marriage between Catalina and his own son and offer financial compensation to Constanza. Such a marriage came with many benefits, principally that of joining the legitimate descendants of Alfonso XI with the illegitimate branch. Plus, from John’s perspective, it meant his grandson would one day be a ruling king.
Said and done: in 1388, Catalina wed Prince Enrique, a sickly child six years her junior known to history as Enrique el Doliente, or Enrique the Sufferer, this due to his frailty. John of Gaunt and his wife sailed off back home, and Catalina was left behind to adequately prepare for her future role as queen of Castile.
In the event, she didn’t get that much time to prepare as her father-in-law died in 1390. An eleven-year-old boy was now king of Castile, and his seventeen-year-old wife was of little support, seeing as Catalina had not been educated to become a ruler—she’d been raised to become a good consort and had apparently not inherited any of her parents’ ambitious genes. Catalina was uninterested in power and wanted only to be a good wife.

Despite his physical frailty, Enrique was made of quite some stern stuff. In 1393 he assumed personal control of his reign, and then he spent the following years fortifying his hold on Castile. He reformed the administration, reduced the influence of the nobility, supported the expansion of Castile overseas by funding the conquest of the Canary Islands and built a strong naval presence—strong enough to defeat the English. He also embarked on a campaign to conquer the kingdom of Granada, the last remaining Moorish kingdom, and in general seems to have been a very competent king.
Where Enrique dedicated himself to policy, Catalina was of a pious nature, expending her time and efforts on founding religious houses. Catalina accompanied her hubby as much as she could, but it took some time before Catalina gave birth to their first child, maybe because of Enrique’s health. However, by 1406 there were three children—two daughters and a baby prince. Unfortunately, in 1406 Enrique died on Christmas Day. Castile had a new king, the one-year-old Juan II.

Enrique had named Catalina and his brother, Fernando, as co-regents. Catalina was obliged to step out of her comfort zone and assume a more active role to protect her son’s interests. Problem was, she and her brother-in-law rarely saw eye-to-eye on things which was why they eventually agreed to split Castile into two regions, one governed by her, the other by him. It was Fernando who wielded most of the power but it was also Fernando who ensured Catalina was allowed to keep her little son with her rather than turn him over to the men Enrique had appointed as his guardians. Still, their relationship was fraught and I suspect Catalina felt quite some relief when Fernando was elected king of Aragon, thereby diverting his attention from the governance of Castile.

There is a surviving description of Catalina, in which she is said to be tall and fat, of an extremely fair complexion and with a tendency to blush. She was blonde, walked like a man rather than like a lady, and she’d inherited the strong features of her Plantagenet forebears. She was also more prone to negotiations than to warfare, and when her brother-in-law died in 1416, Catalina made it her mission in life to shore up the boundaries of her son’s kingdom by various treaties.
Due to her family ties with England she encouraged trade between the countries, which benefited both nations. She also advocated new legislation that forced the Mudéjares (Muslims living Castile) and Jews to wear some sort of emblem and obliged them to stay in their home towns, forbidden to travel or to work with good Christians. This was not well-received everywhere, and some Castilian cities just refused to implement these laws. Still, the writing was on the wall, and some generations further down the line Catalina’s granddaughter, Queen Isabel, would throw all non-Christians out of Castile. After all, Isabel and her hubby were not for nothing nick-named their Most Catholic Majesties…
All of Catalina’s three children married first cousins, children of their uncle Fernando. This would over time become something of a tradition within the Trastámara family, with Queen Isabel marrying her first cousin Fernando II of Aragón. An unfortunate tradition that was embraced by the Hapsburgs as well and which would, in the fullness of time, result in a degenerated royal gene pool.

In 1418, Catalina died and was buried in Toledo, close to her husband. Her young son, Juan II, was thirteen at the time. One year later, he began his personal rule.
In 1501, Catalina’s great-granddaughter would return to the land of her great-great-grandfather as the bride of the Tudor prince, Arthur. Ironically, this prince was also descended from John of Gaunt via the legitimised bastards he sired with Katherine Swynford. In fact, John of Gaunt’s blood was all over the place: In the Yorkist kings, in the Lancastrian kings and even in the Tudor kings. In retrospect one could therefore say John of Gaunt was more than successful in his dynastic ambitions. Somehow, I suspect he wouldn’t have been entirely thrilled by the intervening years of civil war and bloodshed. Just as he’d have been horrified at the thought of his own son dethroning an anointed king and murdering him…