Sometimes, it’s something of a pain in the nether parts to be a history nerd. It detracts substantially from your enjoyment of certain movies, it makes you go “hmm, a Jew? In medieval Sweden?” when you peer at a magnificent painting and it makes you sigh and mutter something about idiots who don’t know anything about medieval dress when ladies of the time gallop about with their hair uncovered and unbound on the silver screen.

I must admit there’s an element of schadenfreude in all this: a snicker when an anachronistic kilt appears in a movie set in the 13th century – or a potato in the 11th century – a snide comment when Edward II swaggers across the screen and shouts that he’s unfurling the dragon banner. (Sheesh! Seriously????)

Most people, however, don’t care. I know, I know: utterly inconceivable to those of us who just love losing ourselves in detailed research along the lines of how the hose was attached to the braies and whether or not velvet would have been around in 1284. Some of us make lye soap just to check out of it works (it does, but it was a very messy process). We try cooking over an open fire and conclude it is much more difficult than one thinks to handle such an unregulated source of heat. But as I said: most peeps don’t care. They read the book/watch the movie because they want to be entertained. They may think they’re picking up some facts along the way (I hope not!) but most probably don’t expect the blockbuster movie to be factually correct. They want it to engage their imagination and emotions. They want to care about the characters. They want some action, some love, some drama. They do not care if the shape of the shields is wrong.

Those of us who write historical fiction must accept this – and recognise that the research we do, we do very much for ourselves as it allows us to travel back in time. thereby sparking our imagination. We have to learn not to load our text with facts, that it makes hard reading to add pages and pages of description of everything from how to build your very own wattle and daub shed to how best to slaughter a lamb. It’s a difficult balance: enough facts to convey a distant time, not so much so as to drown the reader.

Today, however, I’ve decided to talk about one of my favourite paintings in all its anachronistic glory. I give you “Valdemar Atterdag holding Visby to ransom in 1361” painted by Carl Gustaf Hellqvist. 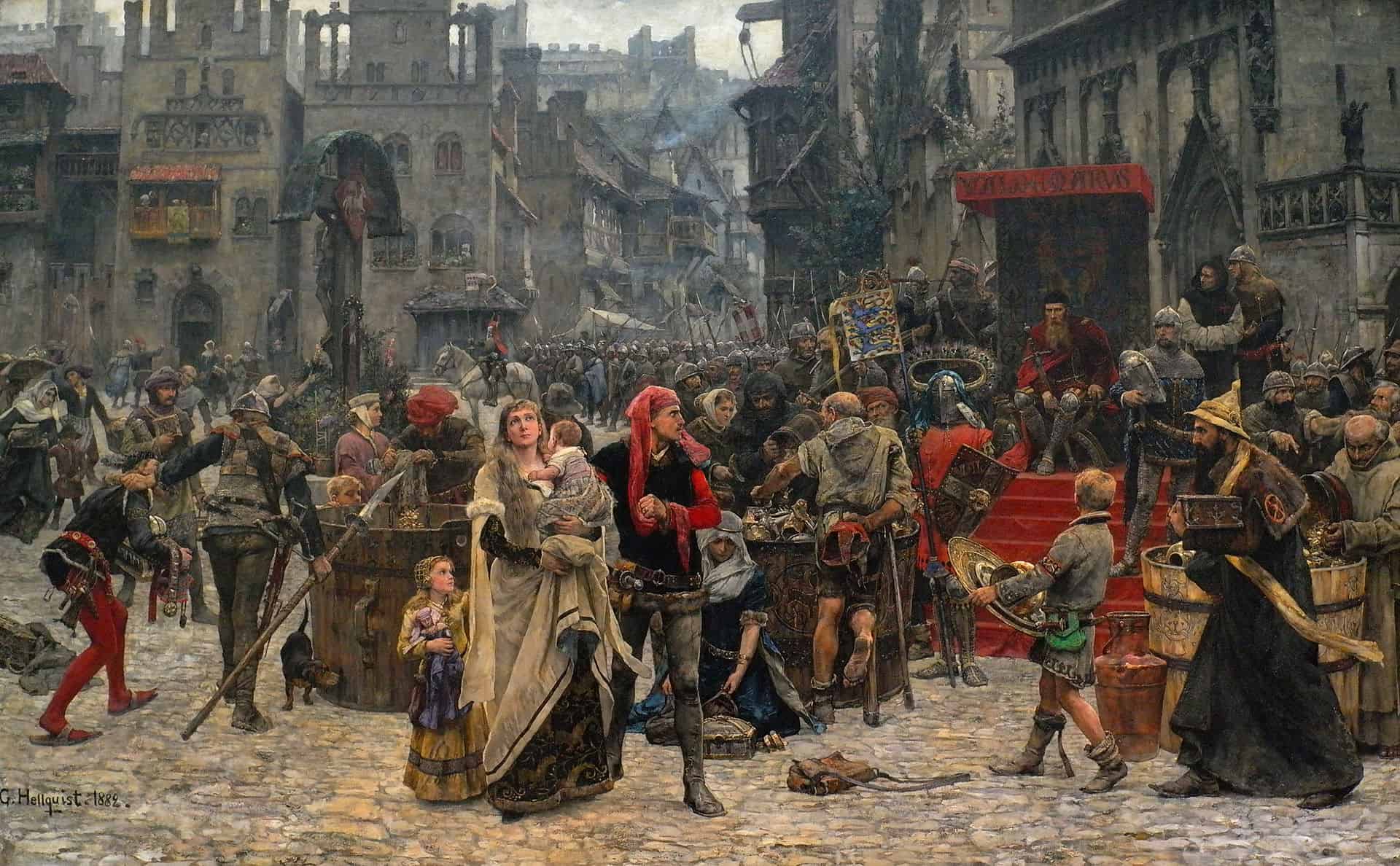 This is, IMO, a fantastic painting. There’s the dour Valdemar, presiding over the ultimate humiliation of the inhabitants of Visby. To his side, his son, Kristian. In the background, huge stone buildings loom over the square and the frightened, cowering people. And it is all wrong. All of it, starting with the fact that Valdemar never held Visby to ransom.

Let us start at the beginning. We are in the 14th century, more precisely 1361. Sweden and Denmark are at loggerheads – nothing new, they’ve been at it for centuries. On the island of Gotland lies the prosperous city of Visby, a city that is part of the Hanseatic League. The Hansa is one of those fascinating power structures that show just how much power resides with those that have wealth. What began as a group of merchants banding together for safety ended up being a network that stretched all across northern Europe, controlled essentially all trade in the region and were the medieval equivalent of an international banking system, allowing the members to access their funds even when they were far from home. The Hansa was also a mover and shaker: they backed some kings, they fought others. They financed wars, they re-routed trade as it suited their political ambitions. Obviously, the medieval kings weren’t all that fond of the Hansa – but it was dangerous to take them on.

Visby was once one of the most powerful of Hansa cities. Situated in the Baltic Sea, it controlled trade to Russia and to the north and saw a substantial influx of German-speaking merchants. In the 13th century, the city of Visby had about as many German-speaking congregations as Gute-speaking (Gute being the local dialect). By the late 13th century, the city of Visby was embroiled in a number of conflicts with the local farmers. Some say this was the reason why the city wall was built in the last decades of the century. A more prosaic reason is that Visby was a rich city and felt it needed the defence and as to the conflict with the local farmers, it had more to do with money than anything else. You se, the Swedish king, Magnus Ladulås, had demanded that the people of Gotland pay tax, and the farmers wanted to refuse while the Visby peeps felt it unwise to challenge the king. Better to pay his taxes and be left alone, they reasoned. Whatever the reason, the conflicts escalated into violence and boy were the Visby residents happy that they had their walls when things became really nasty!

A consequence of all this civil strife was that Visby took its eyes of the ball and the city of Lübeck was quick to capitalise, muscling in on what had previously been Visby’s monopoly: the trade with Russia. This did not go down well and it also meant that Visby’s overall influence within the Hansa shrank. But it was still a very prosperous city.

Let us leap back to 1361. Valdemar Atterdag was the king of Denmark and had recently managed to wrest back control over Skåne (the southernmost part of present-day Sweden). He was in need of cash – all medieval kings were chronically in need of cash, especially those with conquering ambitions. He therefore did a quick inventory of his assets and concluded that as of now, he would demand that the Hansa cities within his control pay for the privilege of doing business within his borders. Maybe he felt he needed to set an example. Or maybe he wanted to rub the nose of the Swedish king in the dirt by showing just how incapable he was of defending his own provinces (Gotland). Or perhaps it was just as simple as Valdemar wanting a lot of gold, quickly, and decided the best way of getting it was by attacking Visby, with the added benefit that he’d be sending a message to all other Hansa cities in his domain: behave or prepare to be plundered.

The Swedish king heard of Valdemar’s plans and sent a message across to Gotland to warn them. In Gotland, panic gripped the inhabitants. A huge Danish army was about to invade! In Visby, the burghers retired behind their walls and locked the gates. In the countryside, men and boys prepared to do battle and began the slow march towards Visby, assuming that once there they would join forces with the city peeps and make a common stand against the Danes.

The Danes landed. Well-trained and well-equipped, they too made for Visby. The farmer soldiers rushed for the gate, throwing worried looks over their shoulders. Once at the gate, they banged on it. It remained shut. They banged on it again, screaming to the people within that they open it. Nothing. More screams, more pleading. The gate remained shut. And then the Danish host was upon them and the rag-tag collection of Gute men and boys may have fought valiantly but they did not stand a chance. Before the  walls of Visby they were hewn down, while the city peeps lined the walls and stared down at the destruction below. How many thousands of men lost their lives that hot July day in 1361 is unknown, but one of the nearby mass graves contained the remains of 1 800 bodies, thrown down helter-skelter into a huge pit. Surviving engravings in churches in Gotland speak of the terror unleashed by the Danes, of blood-soaked ground and death. Everywhere death. Except in Visby.

No sooner had Valdemar won the battle but the city elders hastened to open the gates and hand over the keys to their city, kow-towing before their new master. Valdemar graciously received the keys and hastened to assure the citizens that he was not about to revoke their rights and privileges. Oh, no, he would be happy to recognise them – at a price. So yes, there was a ransom of sorts, but not quite as described in the painting above. Several days later, Valdemar sailed away with five barrels full of gold and silver. I am happy to report that said barrels were apparently lost at sea. Serves him right, IMO. 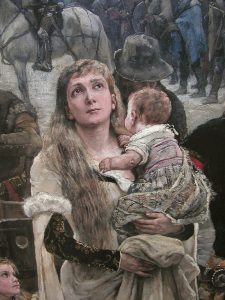 Back to the painting: To those who know their history, there is a lot to groan about. In the foreground to the right we have a gentleman in Jewish apparel. As far as we know, there were no Jews living anywhere in Sweden during the 14th century. Somewhat to the left of said gent, we have a touching family group. He is wearing clothes that place him in the 15th century. She is standing with her hair unbound and uncovered. Tsk, tsk… I guess it just goes to prove historical fiction is not restricted to the written word

There are a lot of other details in this painting that makes the history nerd in me wince. But the romantic me, the one that wants to reach out and wipe the tear off the woman’s face, she shivers with delight whenever she sees this depiction of that far-gone day in 1361, never mind how factually wrong it may be. Just as she cries buckets whenever she sees Mel Gibson let go of that scrap of cloth in Braveheart, no matter that William Wallace never, ever wore a kilt!

8 thoughts on “Of anachronisms and delighted shivers”