There are a couple of death dates I know by heart: Being Swedish, I know the death date of Karl XII who died in Norway November 30, 1718 purportedly having been shot by one of his own with a button. Hmm. Since then the button part has been dismissed, but whether or not he was shot by a Swede who had had it with this very bellicose king we will never know. I also know the death date of Gustav II Adolf who sadly died on November 6, 1632. Note the month peeps, and then it may not be a surprise that another of those death dates I know by heart is that of Roger Mortimer, first Earl of March, who died on November 29, 1330. In other words, he died today – well, 687 years ago, but still. 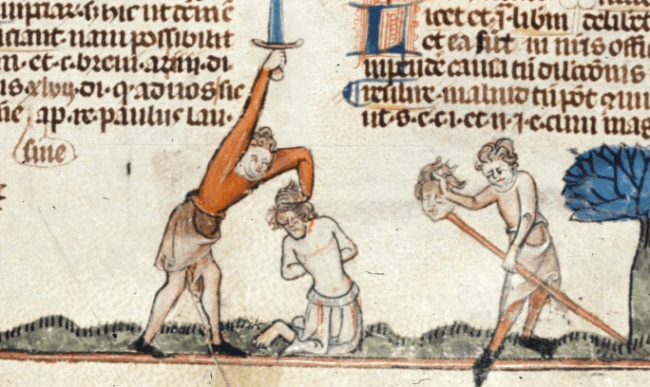 Opinions about Roger Mortimer are divided. I belong to those who see in him a man of great capacity and ambition who was ultimately corrupted by power. Alternatively, some of his more questionable actions were driven by fear: Mortimer was no fool, and the older Edward III became, the closer he knew the day of reckoning was coming, because Edward III was as capable, as ruthless, as ambitious, as Mortimer himself and would not tolerate being on a leash forever.
I have in a previous post told the story of how Edward, some weeks shy of eighteen, had Mortimer arrested, using the famous tunnels under Nottingham Castle to get to him. Mortimer was hogtied and transported back to London where he was walled up in a room in the Tower as Edward didn’t want a repeat of Mortimer’s famous escape from the Tower eight years before.
I assume they left a little hole through which to pass victuals, water and a chamber pot, because a month later Mortimer was condemned to death by the assembled parliament. He had no opportunity to speak in his defence, the king ordering him to be gagged and bound. In one way, Edward’s personal rule therefore began under the stain of illegality – an accused man had the right to answer charges brought against him.
As Mortimer was found guilty of treason (usurping the young king’s power could be considered treasonous I suppose, but at the same time it was Mortimer who’d secured the throne for Edward III) he could have been condemned to suffer that rather awful death of being hanged, drawn and quartered. Edward chose to go for the drawn and hanged version, and I suspect Mortimer shivered in relief. To die with dignity was difficult if you were first hanged until you were almost dead, cut down, castrated, disembowelled while still alive, and then mercifully killed by the separation of your heart from your body. Rephrase: not so merciful…

On this day in 1330, Mortimer was drawn through the streets of London to Tyburn where he was divested of his clothes and hanged until dead. Mind you, by the time he reached Tyburn, his fine black tunic would probably have been in shreds – being drawn behind horses caused a lot of wear and tear.

Now, one thing I’ve always wondered is if Mortimer had his hands or his legs tied to the horses. There are medieval depictions of men being drawn either way, and I suppose that if it was by your legs, chances were your head would be badly knocked about. By your arms, you’d have the dubious pleasure of seeing the surrounding crowds as they catcalled and pelted you with whatever objects they felt you deserved, be it rotten eggs, stones, mud or the odd veggie.
My soon-to-come book In The Cold Light of Dawn will of course have to address this issue. I can reveal that I have made a choice of arms vs legs purely based on what works best for the specific scene I have in mind. “My” Mortimer (who now and then takes up a lot of space in my head – I’d say we have a close relationship after all these years reading up on him. He doesn’t agree, as he is still sulking at my refusal to go alternate history on him and change the events in Nottingham) has expressed a preference and I’ve decided to go with his choice. After all, the end result is still the same: a forty-three-year-old man standing naked and shivering as he offers a short speech before the noose around his neck is drawn tight and he is heaved up to die. Takes some time to die when you’re hanged that way as your neck isn’t broken by the fall…
Anyway: once I’ve recovered from the pang of grief I always feel on this date I will do what I usually do on this day (and on November 6. Not so much November 30 as I don’t rate Karl XII as much of a king. Weird man who indulged in such hobbies as beating bears with cudgels…) I will light a candle and hope Roger Mortimer’s soul is at rest.
(NOTE! This is a rewritten version of the post I was asked to write for the FB Group The History Geeks)