Today is the first Sunday of Advent. Big, big thing in Sweden. In fact, it is probably the only Sunday of the year when our churches are full, the congregations adding loud and enthusiastic voices to psalms most Swedish people over the age of thirty know by heart. (The younger generation is a lost cause – they prefer other tunes)

By the time this Sunday comes around, most self/respecting Swedes will have decorated their homes. Not fully ( As an example, we don’t do trees until some days before Christmas) but there should at least be a poinsettia, some hyacinths, a number of paper stars, candles and a tomte or two. An evergreen wreath on the door is an added plus. Prior to decorating, a major cleaning operation should have taken place.
Now, Advent sort of kicks off the whirling pre-Christmas season. Us Swedes consume mountains of gingerbread biscuits in December, we drink glögg (hot spiced wine served with raisins and almonds) and bake. No Swedish Christmas without home-baked cakes, without a table that groans under the weight of the massive smorgasbord, containing everything from herring, salmon, ham, pork trotters, meatballs, sausages, three types of cabbage, potatoes, cheeses, bread, ribs, and rice-porridge mixed with whipped cream.

Normally, I would spend December baking. Fruit cake, Swiss rolls, saffron buns, gingerbread cookies, almond cakes, fritters. As I do every year I’d have tried to convince my mother it is high time she gives me her recipe for chocolate and hazelnut cookies. As always, she would promise to do so but keep on forgetting to do so. I’d be considering just how many types of herring I need to pickle and whether it was enough with gravad lax or did we need some smoked salmon as well. By now, I’d have ordered the ham and the ribs. I’d be making toffee and fudge and other goodies. This year, I’m not doing any of that. This year, Christmas will be healthy and very non-traditional.
It’s strange how deep-seated these traditions are, especially if one considers that they’re not much more than a hundred years old or so. If we go back beyond the 19th century, most Swedes were far too poor to eat anything but cabbage and porridge. Only the rich could afford meat for Christmas. Those further down the social hierarchy may have had a pig, but once the beast was slaughtered they sold the meat to buy cabbage and dried peas. (Okay, they may have kept the trotters & feasted on them) 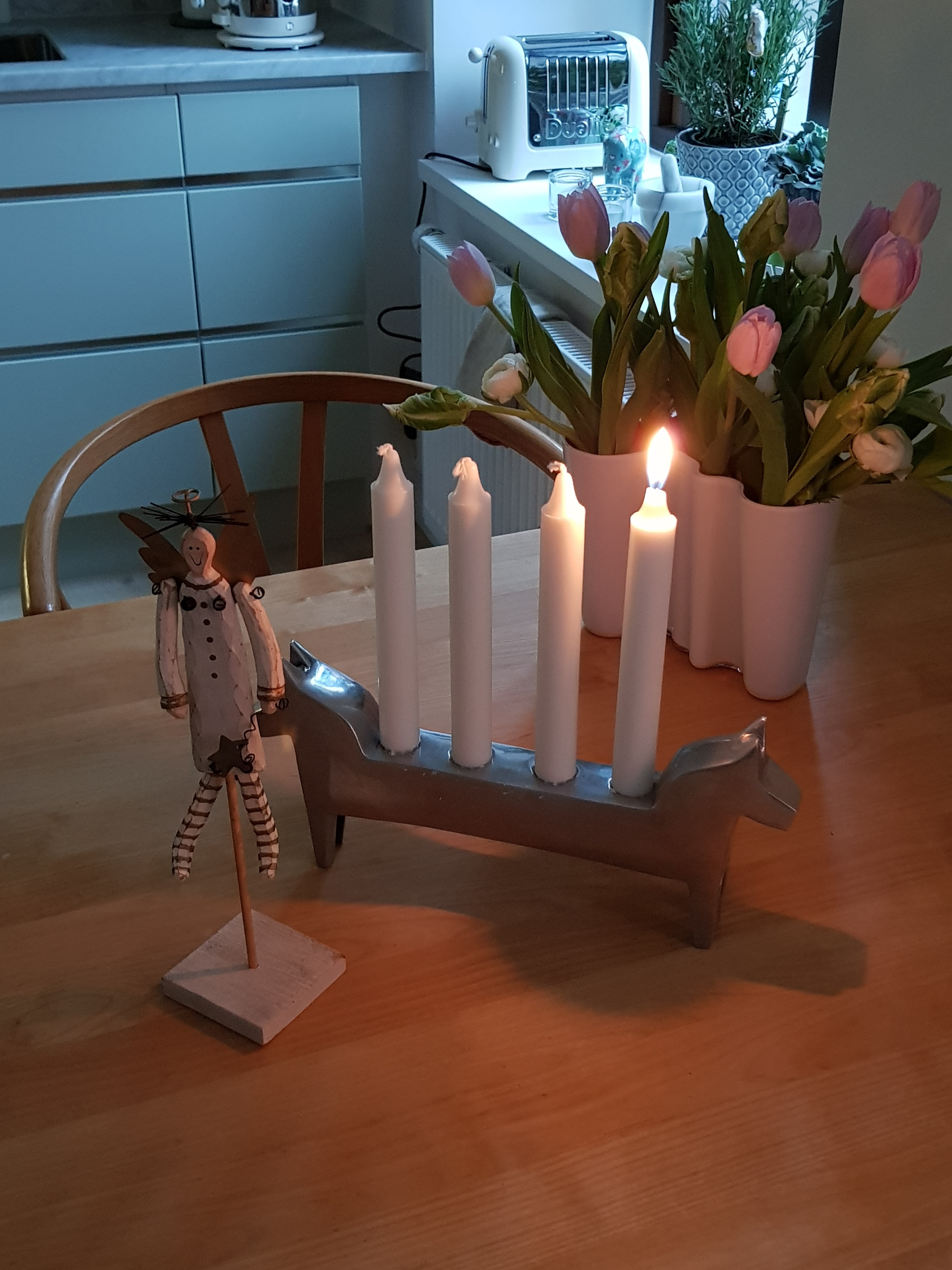 Likewise, we burn candles like crazy in December – every self-respecting Swede has an Advent candleholder for four candles plus we do like combating the midwinter dark by lighting as many candles as we possibly can. Our forebears likely didn’t have much more than rush lights, and the very, very cold and dark Swedish winter had them huddling together before their hearths while throwing worried looks at the dark outdoors. After all, everyone knew there were trolls and elves and gnomes in the forest and anyone foolish enough to venture outside after nightfall might very well end up on the troll’s dinner table.
Swedish fairy tales tend to be of the darker type. Rarely does the princess kiss the frog and reveal a prince, Rather she kisses the frog and dies or reveals a huge troll that wants nothing as much as to gobble her down, nicely served on a golden platter (even trolls have style). I suspect these tales reflect the mood of our forefathers, sitting cold and hungry in one-room abodes housing entire families, beasts and a generous complement of fleas and lice. There they were, sitting close together and what better way to pass time but to tell each other stories? Preferably stories that would keep the young ones from exploring too far into the wintry forests… 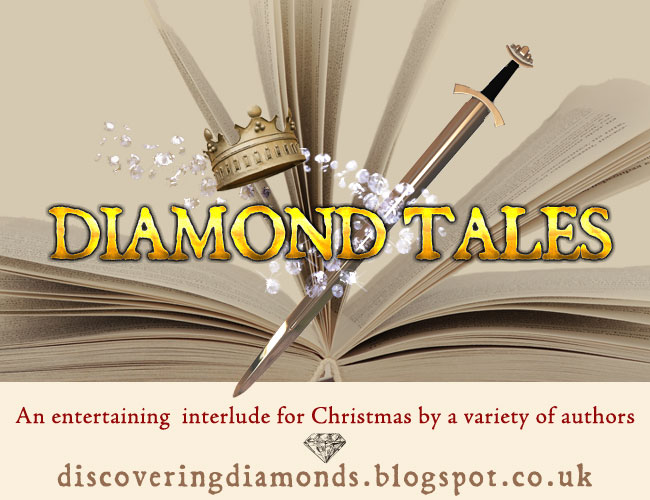 I like telling stories. (Duh!) So while I will steer clear of all the foodie traditions this year, I am proud to announce that I am taking part in a short-story blog tour which starts today and runs all the way to Christmas. Maximum 2 000 words long, these little nuggets go very well with tea and cake. Or wine and olives. Or coffee and chocolate. And they’re not nuggets – these Diamond Tales are more like sparkling jewels, the entire collection hosted by the Discovering Diamonds review site. So why not spend 15 minutes each day from now to Christmas escaping into a little bubble of glittering escapism? Who knows, you may encounter authors you’ve not read before – always a good thing, assuming you like what you read ?

Back to Swedish traditions: In Sweden, we have a Christmas Goat. Very strange, you might think, and there are various explanations as to why we have this fondness for Yule goats. One of the explanations has to do with the old feast day of Saint Nicolas on December 6. Tradition has it that on this day Nicolas would bring gifts to children and to show just how powerful this medieval saint was, he was often accompanied by a goat-figure named Krampus (originally representing the devil) whom Nicolas had on a leash to show that good wins over bad. Not that this was any truer six centuries ago than it is today, but we really do like hoping that the bad will be vanquished by the good, right? Over time, Krampus grew into his own: where St Nicolas would reward the good children, Krampus would punish or even carry off bad children.
After the reformation, St Nicolas was thrown on the scrapheap in Sweden. Saints were scoffed at (except for St Lucia) and instead of having a canonized bishop distribute goodies to the eager children on December 6th, the goat figure/ Krampus took over that role, becoming a mostly benign if stern figure who would reward the good children with presents while butting the bad children with his horns.
The goat was an established symbol here in Sweden loooong before Ansgar made it up here to christen us. Those of you who know your mythology will of course be familiar with the fact that Tor, god of thunder and war, rode a chariot drawn by two impressive goats. Long before St Nicolas & Krampus were household names, us Scandinavians celebrated the winter solstice with intense and wet parties that had as their primary purpose to ensure good crops and fertility in the year to come. One tradition was that the last of the sheaves harvested was saved until this midwinter event, at which time it was shaped into a rough representation of a four-legged animal. The resulting “goat” was used in various games but was also seen as a symbol for next year’s harvest, which hopefully would be better (or as good as) this year’s. 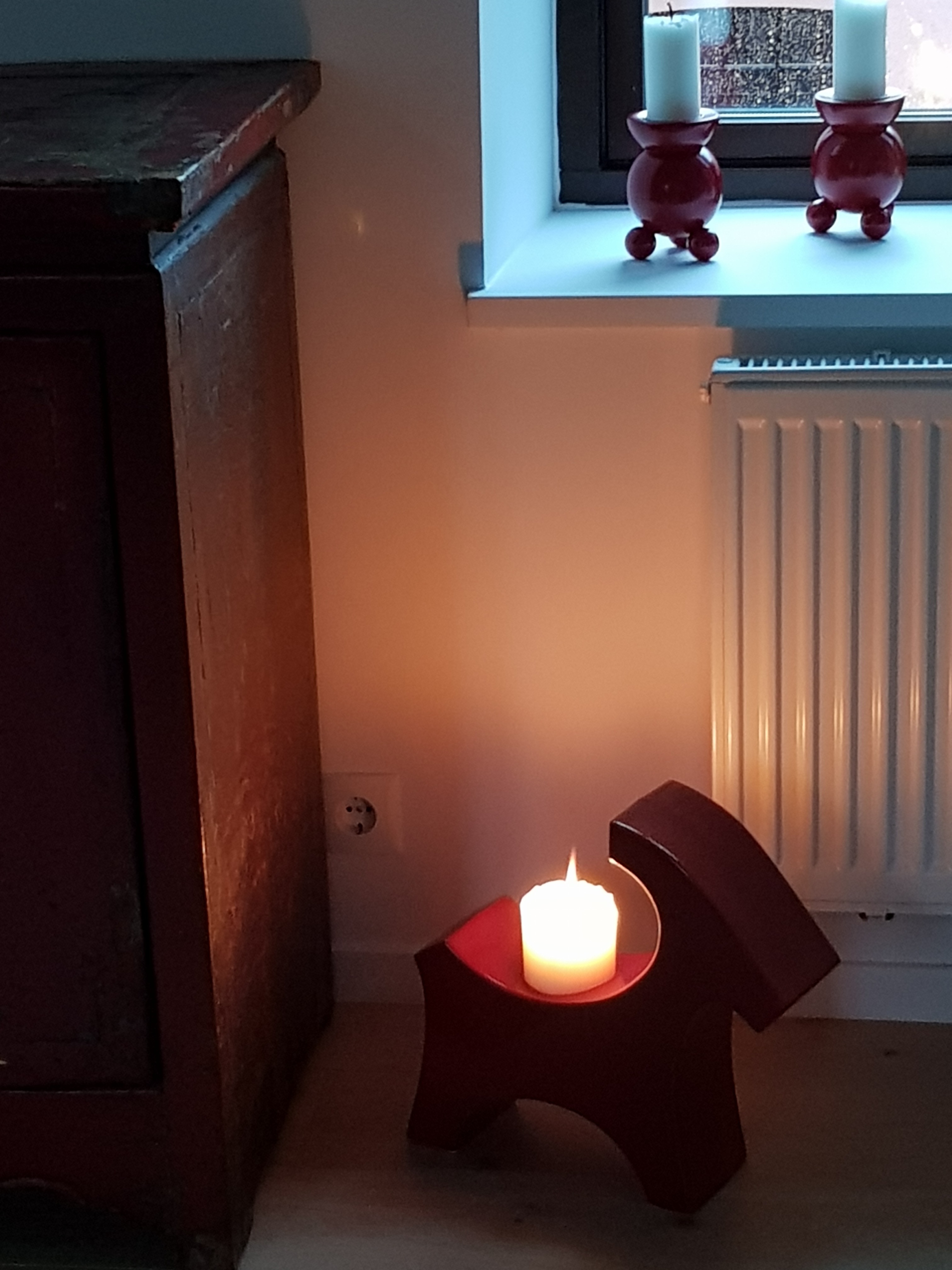 These days, our goats are mostly decorative. And as we’re now officially in the Christmas season, my goat is already in place, candle and all. As to me, it is time to start clearing my throat and humming a few bars of the first psalm to be sung today!

3 thoughts on “When Christmas looms – of decorations, traditions and short stories”