Spending time with second son is always something of an intellectual stretch, often ending with hubby and I staring at each other and wondering where on earth second son came from. Okay, okay: we know where he came from. We even have a pretty good idea just when he was conceived, but there was no sudden burst of stars at that critical moment, nor did his birth have us breaking out in song. It’s sort of difficult to sing and push at the same time, and hubby is tone-deaf and has too much self-preservation to risk humming as I was labouring. Whatever the case, second son is something of an enigma to us – he thinks so out of the box the rest of his family have a hard time keeping up.

Second son is also one of those people who are constantly expanding their knowledge. For a light summer read, second son chooses “The Wealth of Nations” followed by an treatise on Chinese history. He is just as happy discussing details in Roman history as he is explaining the inexplicable world of genetic algorhythms to his mother, and as he not only reads a lot, but also seems to listen to hours and hours of obscure podcasts, he can bring up the most amazing topics over tea and cake. Like immortality.
In this case, it all started with a discussion about Elon Musk and his somewhat dark view of what the advent of advanced artificial intelligence (AI) may mean for us humans. As per Musk, AI & digitalisation will lead to a huge reduction in “simple” jobs such as driving cars, lorries, buses, trains, working on production lines & whatnot, and as a consequence a lot of people will lose their income. This is a view Musk shares with many, which is why there is an increasing discussion about the need of implementing some sort of citizen’s wage. I can just imagine how difficult it will be to get such a system in place. Plus, I’m not so sure human beings benefit from passivity.
Anyway, in the midst of this debate, we ended up discussing somewhat more theoretical concepts such as artificial intelligence taking over, the challenges of living in a world where more and more people would likely make it to a hundred. This is when second son stole the last piece of cake and casually said that soon enough, eternal life would be a possibility.
“Round the corner,” he said. “It’s just a matter of locking down the way our cells replace themselves.” Fortunately, it’s not exactly round the corner. There’s a huge gap between understanding that if we can only find a way to stimulate old and tired cells to continue replacing themselves we can live for ever to actually doing it. Phew.
I’m not sure eternal life is something to aspire to. Isn’t life as precious as it is precisely because it is finite? And can you imagine the tensions it would cause in society when all these ancient peeps insisted on remaining alive, thereby shortchanging future generations? Plus any “eternity treatment” would probably be very expensive, which means it would be a person’s wealth rather than their moral attributes that would decide whether they would live forever, yes or no. In the world we presently inhabit there are quite a few very rich people with exceedingly low morals who, I believe, would be more than thrilled at extending their lifespan to the detriment of humanity in general. Not exactly a scenario I find particularly palatable.
Second son shrugged. “The technology will be there at some point. Just as we already have the technology to tamper with the DNA of unborn babies.” Yeah, we do. And it is a great thing if such technologies can be used to eradicate genetic diseases. It is not quite as good a thing if those technologies are used to “enhance” those future babies so that they all develop into tall, athletic, handsome blue-eyed and blond people. Or brown-eyed and dark haired. Second son nodded in agreement before stating that nature had a tendency to balance things out.

“Think of the banana,” he said, and I must admit my response to that was “Eh?”
“The banana,” he repeated patiently. “It used to be all bananas more or less were of a type known as the Gros Michel, but back in the 1950s, a fungus disease wiped out all Gros Michel bananas. A major catastrophe for the banana world, the result of all those bananas sharing the same DNA. If we start tampering with human embryos so as to make them fit one mould, chances are their DNA will also be very similar, which in turn would make the population very susceptible to certain types of epidemics.”
“Ah.”
“What we need to do is understand – or at least attempt to comprehend – just how radical the possibilities offered by new technologies will be – and start thinking about legislation to ensure all this new stuff isn’t misused,” second son continued.
“Would it be misuse to pay for eternal life?” I asked, visualising a number of men (yes, mostly rich white men with a narcissistic streak) sitting around sipping at some grossly expensive elixir.
“Probably not.” Second son stretched. “But the concept of eternal life and the reality of it are two very different things. Imagine living on and on while your friends die, your family dies, the world changes and no one can anymore understand your references to the music of your youth, or the events that shaped you.” He tapped his head. “That way lies insanity.”
I am prone to agree. While we may one day be able to tamper with our bodies so as to offer an endless lifespan, I’m not so sure our mental capacities would be as adaptable. Eternity is a long, long time to spend alive. Boredom would likely set in. Severe boredom, the type that makes you depressed enough to throw yourself in front of a train or off a house. If you live long enough, likely you’ll spend most of your time considering just how to stop living. 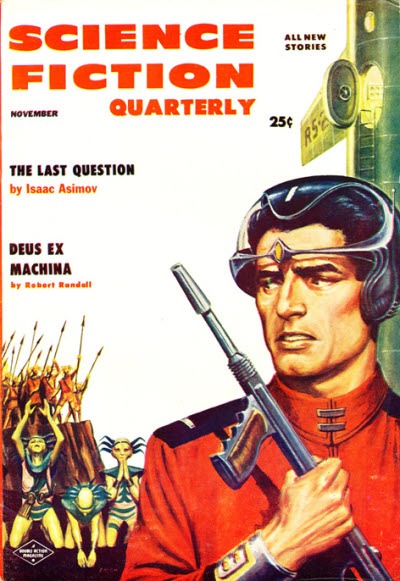 Very many years ago, I was a big fan of Isaac Asimov’s short stories. One of them has stayed with me through life, and is a rather short thing called The Last Answer. It tells the story of atheist Templeton who dies of a heart attack and ends up as a cognitive presence in the hereafter, his only purpose being to think thoughts that will amuse The Voice, an ancient, immensely powerful intellect that can easily think up amusing things all on his own. So goaded is Templeton by the futility of this continued existence at  The Voice’s behest that he decides to think up a way to destroy it. Which is precisely what The Voice wants him to do… (Great short story, BTW, as is the companion piece, The Last Question)
I guess Asimov and I shared a common perception as to how horrible eternal life could be…
No, no eternal life for me – at least not here on earth. I wouldn’t mind several more years, though, just as I wouldn’t mind miraculously shedding like 15 kilos, growing a couple of inches and wake up to long, thick hair the colour of a rippling rye-field. Probably won’t happen, and I’m okay with that too. 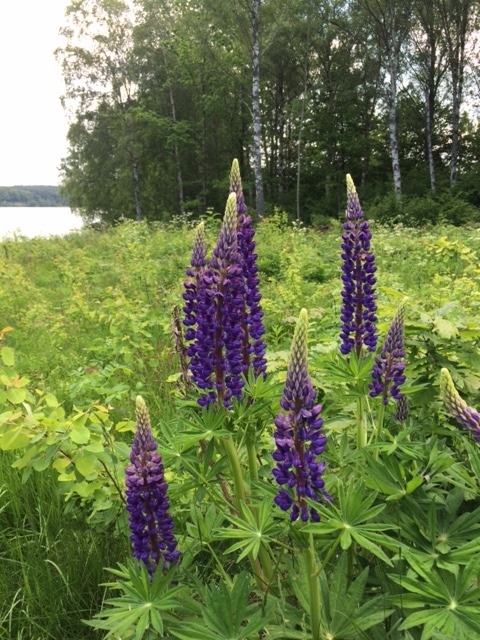 But when it is time for me to go, I am sure there is something on the other side. (And yes, I realise I am being inconsistent here: but this would be another life, not an ever-extended life)  I must admit to hoping for gambolling lambs and green pastures, ever-replenished teapots and warm apple pie and an endless supply of Belgian chocolate. And hubby to hold my hand, but when I say that hubby just smiles and shakes his head, reminding me that he doesn’t believe in stuff like that. He is planning on returning as a bluebell.
“Or a lupin, seeing as you love them so much,” he says with a smile that grows softer when he sees the tears in my eyes. Eternity without him seems sort of pointless, actually. That makes him lean forward to kiss my brow.
Ultimately, all we have is now. As yet, there is no elixir that adds years to our lives, no magical rejuvenation that has us springing out of bed at eighty while feeling twenty-five. Tomorrow there may be, and humanity will collectively have to address the challenges poised by such an invention. But for now, grab hold of your life and savour it. Life is short, and no matter how many gambolling lambs may be waiting in the afterlife, only this life is a certainty. Live it to the full, people. Marvel at the world that surrounds us, walk barefoot through dewy grass, wade along the seashore under a starlit sky. And when you see a bluebell – or a lupin – stop for a moment and consider just how lucky you are. You are alive. Not bad, hey?

8 thoughts on “Eternity is a long, long time – but we only have now”