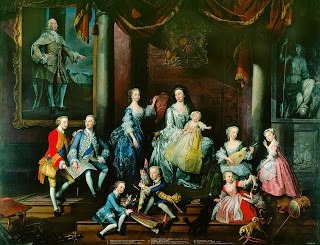 Today, I thought we could spend some time with Caroline Matilda, princess of England and queen of Denmark. She was born in 1751, daughter to Frederick, Prince of Wales and his wife Princess Augusta of Saxe-Coburg. By the time of her birth, her father was already dead, and as per her mother’s wishes she was brought up far from the corrupting influences of court life, the cosseted youngest sister of the future George III.

However protected her upbringing, Caroline Matilda was a princess, and as such she was expected to marry as it benefited her brother’s kingdom. To ensure the young princess was a credit to her future husband, she was given an excellent education, and by the time she was a teenager she spoke not only English, but also Italian, French and German.

In October of 1766, the fifteen-year-old Caroline Matilda was married by proxy to her cousin, Christian VII of Denmark. There were rumours surrounding the Danish king, mutterings that all was not well in the state of Denmark – or at least not in the head of its royal ruler – but for all George III’s concerns, he still chose to send his little sister off into the unknown. As to the Danish, it was all perfectly simple: “Avec un Coeur bon, une humeur douce (…) et une envie de plaire au roi son epoux, elle peut s’attendre à une sitiation très heureuse.” In other words, smile and please your king and all will be well.

Not so simple as it turned out, seeing as the young Danish king didn’t want a wife; just seventeen, he had hoped to enjoy some more years of carousing and whoring before he was forced into a marriage bed. Carolina Matilda was no more enthusiastic, but she knew where her duty lay, and so tried to make the best of things. Difficult to do, when she was a stranger in a country, doubly difficult when the king began to lavish all his attention and affection on a much admired prostitute.

Further to Christian’s womanizing, Carolina Matilda quickly realised her new husband was not all there. Given to panic attacks, to severe mood swings and a marked lack of concentration, the young king was restless and unhappy – and very much under the thumb of his formidable step-mother, Juliane Marie, and her cronies. 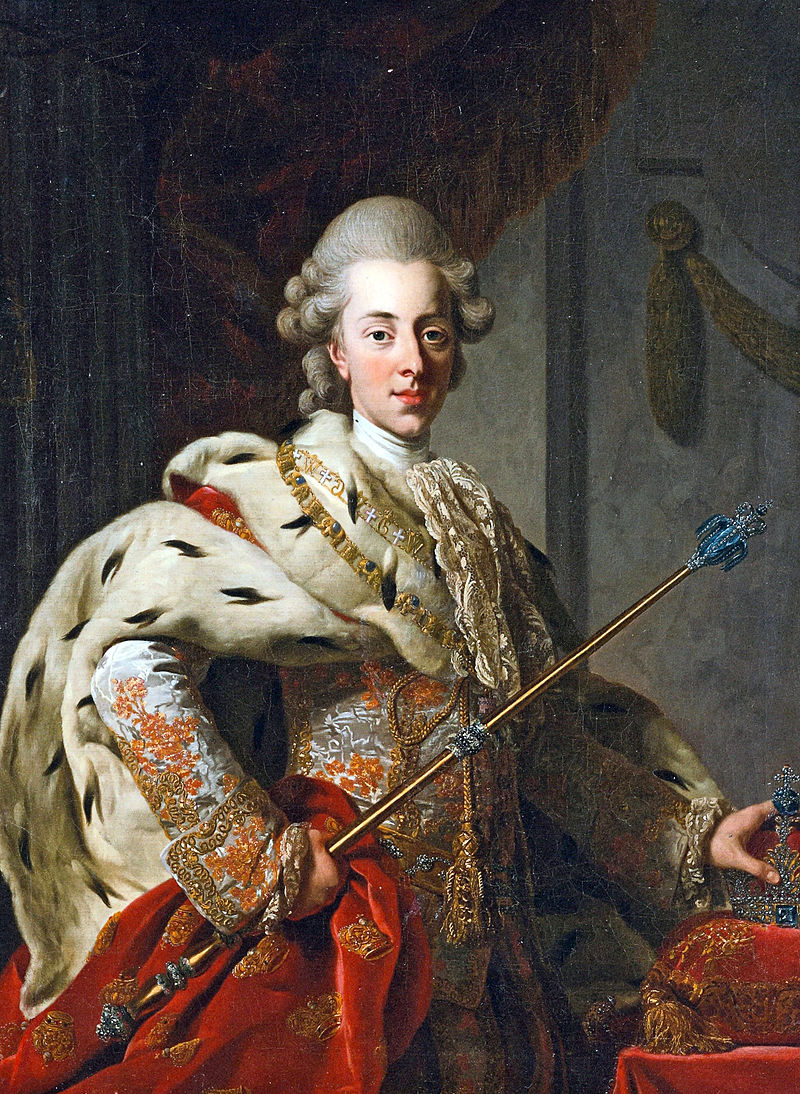 Christian seems to have been born with certain mental weaknesses – and things were not made better by the rather terrifying methods used to instill discipline in the young prince. He was often severely beaten and subjected to being submerged in ice cold water when he threw “tantrums”. His father was not all that interested in his son – he was more interested in women and spirits – and so little Christian had no one to look out for him. His step-mother most certainly did not: she had a son of her own to promote, and driving Christian over the edge would have been a perfect stepping stone for the oh, so eager mama to get her own baby into the ermine.

One therefore imagines that Juliane Marie was less than thrilled by Christian’s marriage to a potentially fertile wife. I imagine she did little to encourage the newly married couple to conceive, and must have been quite devastated when Christian’s reluctant visits to his wife’s bedchamber resulted in a little prince, born 15 months after the wedding. 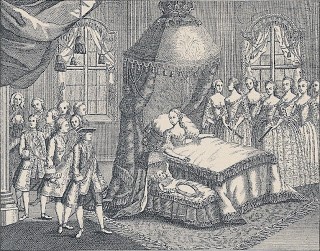 The birth of an heir did not improve the relationship between the young king and queen. He remained as distant as ever, she submerged herself in the care of her son. Now that he’d done his duty and fathered a son, Christian VII decided he needed to see the world, and  in May of 1768 he set off on a grand tour, planned to take at least two years. Caroline Matilda heaved a sigh of relief. Christian did too, sitting back in his gilded carriage after waving goodbye to his assembled family.

A king on a grand tour didn’t exactly ride around unaccompanied. With Christian went a group of people numbering close to fifty, and among his inner circle was one Johan Friedrich Struensee, hired as his personal physician. Struensee was a highly educated man, a proponent of the Enlightenment. He was also a kindly and patient man, and for the first time ever Christian found a person who took his panic attacks and mental ghosts seriously. In a matter of months, Struensee had become the king’s confidante, his pillar of strength, and when the king’s mental collapse in Paris forced the royal party to return home much earlier than planned, Struensee returned with them.

I imagine Caroline Matilda was less than happy to welcome her husband home – things had been nice and calm during his absence. And he was as vile as ever, his impervious, near on cruel, behaviour towards Carolina Matilda upon his return left her humiliated – and ill. Seriously ill.

The king proposed that his new doctor examine her – no, he insisted that the queen allow Struensee to do so. Caroline Matilda was sceptical. Struensee was the king’s man, and she had no reason to trust him. However, after a further few weeks of feeling ill, she reluctantly agreed to do as the king suggested. The progressive doctor did a thorough examination and concluded there was nothing physically wrong with the queen, she suffered from melancholia brought on by her obvious unhappiness. Struensee ordinated exercise, such as riding, and some months later the queen had clearly recovered, riding through Copenhagen in men’s clothes, her cheeks rosy, her eyes glittering.

While it is a fact very many young women adore horses, it wasn’t only the riding that had Caroline Matilda all starry-eyed and rosy. No, the queen had fallen in love – most unfortunately – with her husband’s physician. Struensee performed an elegant balancing act, tending to the king’s needs and anguishes during the day, to the queen’s rather more carnal desires at night. The man was as besotted as the queen, finding in Carolina Matilda an intelligent companion, a woman who applauded his progressive ideas and was willing to support him on various issues.

The king may have been mad as a hatter, but he was no fool. He was well aware of Struensee’s nightly visits to his queen, and he doesn’t seem to have cared. If anything, the addition of Struensee to the household had resulted in something approaching domestic bliss for both the king and queen, and for the first time ever, the king voluntarily spent time both with his wife and his son.

If the king had no issue with his present unorthodox marital situation, his court most certainly did. The immorality had to be stopped, someone should cane the queen for riding about in breeches, and as to Struensee’s visits to her bedchamber, well, really! The king shrugged and intensified his relationship with Struensee, appointing him his chief minister.

Struensee was a man of vision. He wanted to reform society, to break away the government from the stranglehold of the prim and conservative Danish church. In less than a year, Struensee pushed through more than a thousand new laws, notable among them a law that forbade torture. The king happily went along with all this, while in the wings his former advisors gnashed their teeth and howled in frustrated rage. A mere doctor, a foreigner (Struensee was German) to usurp their power and change their world – no, this was unacceptable.

While discontent brewed, the king, the queen and Struensee continued to play happy families. The king was given a Moorish boy as his personal page, and spent his days romping about with his new playmate. The queen was pregnant and even if the king now and then graced her bed with his presence, it was the opinion of the court that the expected child was Struensee’s, not the king’s. Whatever the case, once the child was born, the king claimed the new-born princess as his. 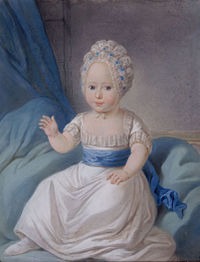 The summer when little Louise Augusta was born was the high point in Caroline Matilda’s life. A new child, a lover she admired and lusted for, a husband who seemed happy enough with his games, and a son she doted upon. All was well in her little world, and she probably dreamed of many future years like this, years in which Struensee would rule, the king would play, and she would raise the future king to be a man of ideals.

Unfortunately, the Danish nobility had other plans. Ably captained by Juliane Marie, the ousted former ministers performed a coup in January of 1772. After a night of festivities, a masquerade ball no less, Juliane Marie and her men paid the king a nightly visit, scaring him into signing two arrest orders, one for Struensee, one for the adulterous queen.

At dawn, January 17 1772, Carolina Matilda was wakened by her terrified maid, who handed her a note from the king telling her she was to be arrested and taken to Kronborg. Carolina Matilda first thoughts were for Struensee and she rushed through the secret passage to her lover’s room. It was filled with grim soldiers going through his papers. The queen rushed back and tried to get access to the king, to plead her case. Not to be, and an hour or so later the queen was bundled off to captivity, holding her little daughter. Her son she was forced to leave behind.

Initially, Caroline Matilda denied her affair with Struensee, hoping thereby to save her lover. But there were too many witnesses, and under substantial pressure, Carolina Matilda finally admitted to her adultery. He did the same, and in April of 1772, Johan Friedrich Struensee was beheaded before a huge crowd. It is said he kept on hoping for a reprieve… His mistress, the disgraced queen, signed the divorce papers that same month. Little Louise Augusta was taken from her once she was weaned, and in May of 1772, Carolina Matilda was exiled from Denmark – brother George III had sent envoys to negotiate for her release.

Caroline Matilda was never to see her children again. In June of 1775 she died, some months shy of her twenty-fourth birthday. It is said she died of scarlet fever – but some whisper she died of a broken heart.

Her cuckolded husband was to live for very many more years, at first as the unhappy and frightened puppet of Juliane Marie and her son, but from his son’s 18th birthday under Crown Prince Fredrick’s regency. Caroline Matilda’s son was to prove himself a most capable leader, both as regent and king, a man of vision and reform. And as to Louise Augusta, she would become her brother’s most trusted confidante and quite the darling of the Danish court.
(This post was originally posted on English Historical Fiction Authors blog – albeit that the above had been reworked.)