Some months back, I posted about the unhappy Juana of Castile and her erratic behaviour when her husband died. Grief, it seemed, pushed her over the edge, and life would never again be the same. In Juana’s case, very much the truth, what with her spending over four decades locked up. 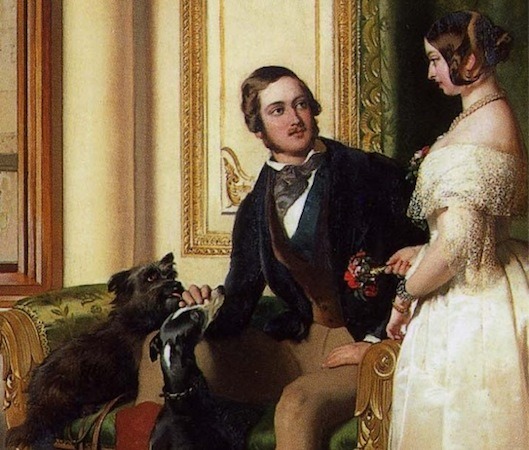 There are, of course, various other examples of people who have loved so much it left them vulnerable to immense heartache upon the loss of the other, and one example that immediately springs to mind is that of Queen Victoria and Prince Albert.
I must come clean and admit from the beginning that I am not much of a Victoria fan – or rather, of the Victorian age as such. IMO, it suffices to look at the clothes to understand why – that, and what I perceive as the hypocrisy of the age. Since some weeks back, however, I’ve had to revise my opinion of Victoria substantially – while the immediate image that pops to mind is the grieving widow in black of her latter years, she was once a spirited young woman with an amazing combination of guts and wits. And then there was Albert, and as most of you know by now, I am a sucker for love stories…
For those who know little of Victoria, one can start by stating it must have seemed very unlikely that she would one day become queen – her father was the fourth son of George III, and his chances of inheriting the throne were therefore slim. However, the future George IV only fathered one legitimate child, the Princess Charlotte (who died tragically in childbirth), the second son died without issue and while King William IV had ten illegitimate children, he had no legitimate issue. Victoria’s father, Prince Edward, therefore won the jackpot in this genetic gamble: his child would be the one to ascend the throne.
Edward was married to a German princess, Victoria of Saxe-Coburg Saalfield. The lady in question does not seem to have been the life and soul of a party, being of a serious disposition. Seeing as Prince Edward died while his daughter was as yet a baby, he had little influence in shaping his daughter’s character, which may not necessarily have been a bad thing, given that he doesn’t exactly come across as a paragon of virtues. 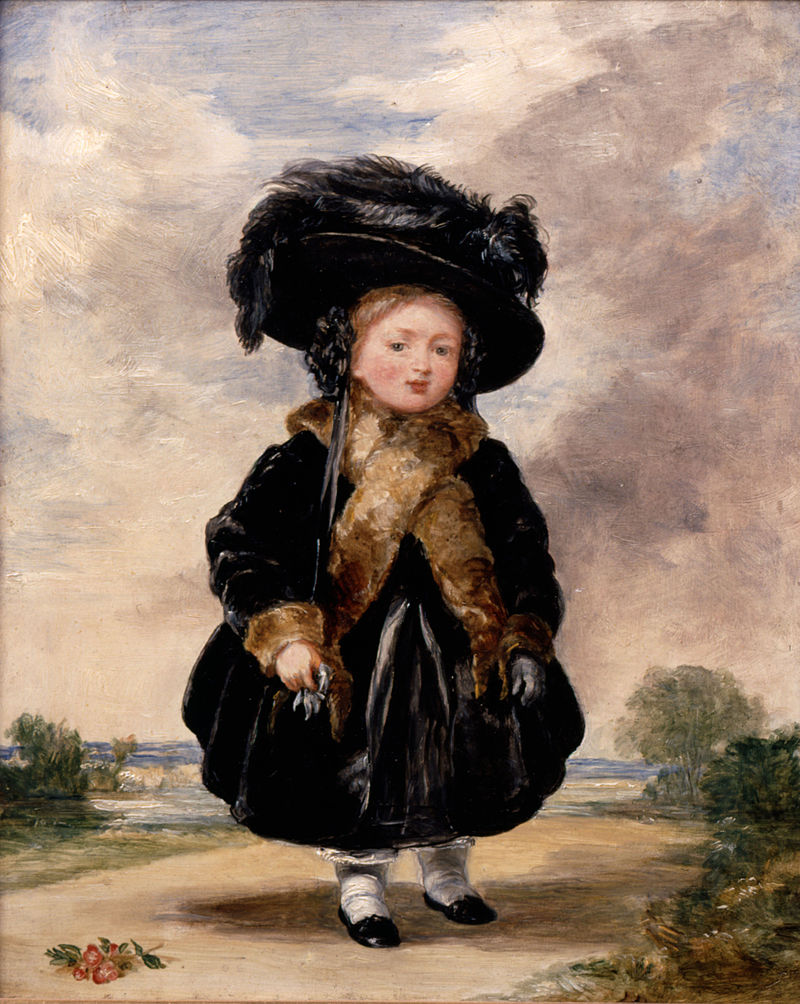 Instead, Victoria was raised by her mother, and due to Victoria Senior’s overprotective behaviour, no one but the mother (and her trusted comptroller – a rather vile character called John Conroy who, together with loving Mama, tried to coerce Victoria into appointing him her private secretary. Didn’t work…) had much of a say in how Victoria was brought up. One gets the impression of an isolated child, always watched, always supervised, her every day carefully regimented. It is testament to Victoria’s inner qualities that she emerged from this dreary childhood and youth relatively unscathed.
William IV disliked his sister-in-law, a sentiment returned in full by the lady in question who considered William IV a depraved monarch, what with all those bastard children of his that grew up at court. (And kudos to William’s wife, the gracious Adelaide, for seemingly finding it in her to welcome all these offspring when she herself was destined to remain childless) Specifically, William was very concerned by what might happen should he die before Victoria’s 18th birthday – he was determined to survive long enough to ensure Victoria Senior did not become regent. Happily, he did, clinging to life until Victoria was safely beyond her 18th birthday.
Victoria became queen in 1837, stepping out of the shadow cast by her mother to begin forging her own destiny. A young queen – but by no means a stupid queen. However, there was no getting by the fact that she was a girl, and as everyone knew, women were the weaker sex. Clearly, Victoria needed a man by her side. Hmm. Victoria rather enjoyed her new-found freedom, and was in no hurry to wed.
On the other hand, there was gorgeous Albert. 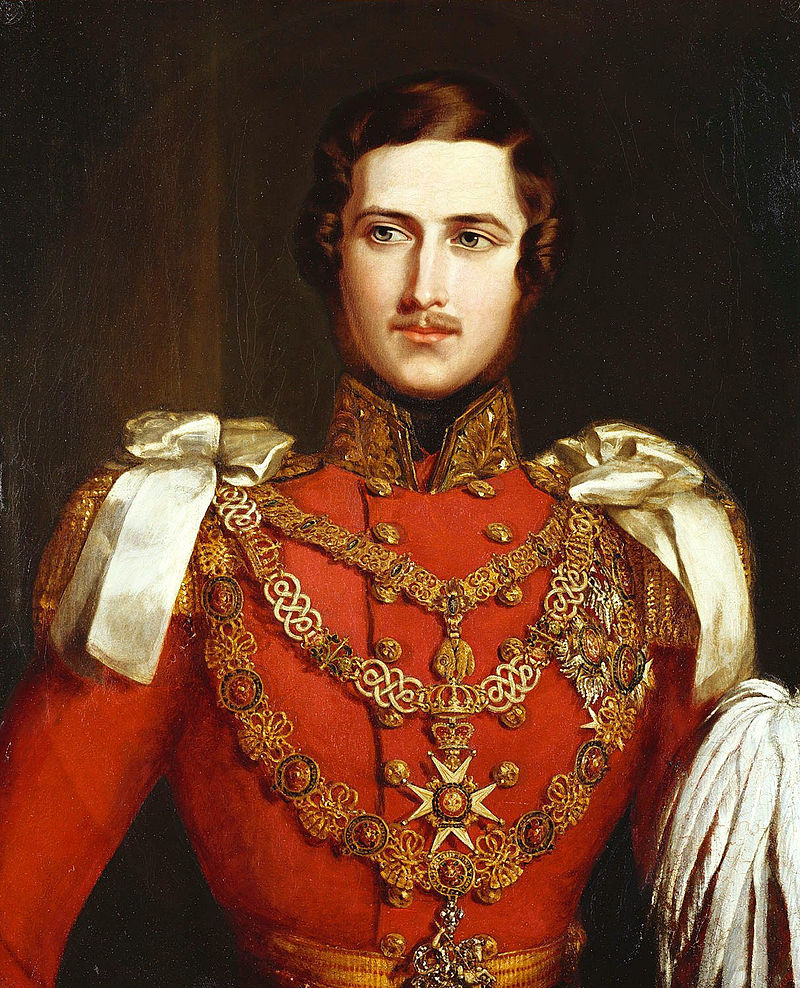 Albert was Victoria’s first cousin – a marital candidate eagerly promoted by Victoria’s mother and maternal uncle. They hoped to control the young couple and thereby influence the political development in Britain. While Albert may initially have been party to his uncle’s ambitions, soon enough the young man was genuinely in love with his prospective bride – and she with him.
They married in 1840 – after Victoria proposed to Albert (She had to: she was higher in rank). They were both twenty – very young as per our way of thinking. They also had what we in Swedish call äktenskapstycke, which translates into “marital affinity” and essentially means the bride and groom share values, interests and also certain physical aspects. Looking at Albert and Victoria, it is obvious they are related. Likewise, they were both proficient musicians, they both enjoyed drawing and shared an interest for culture in general. A marriage made in heaven, one would think.
But it wasn’t always a bed of roses: Albert was frustrated by being relegated to being “the husband, not the master”. A man of many talents and a well-developed social conscience, he went mildly stir-crazy living a life in which he was mostly expected to be decorative. Fortunately, Victoria quickly came to realise just how valuable an advisor her husband could be, and soon enough their partnership extended beyond bed and parlour to the office and beyond. 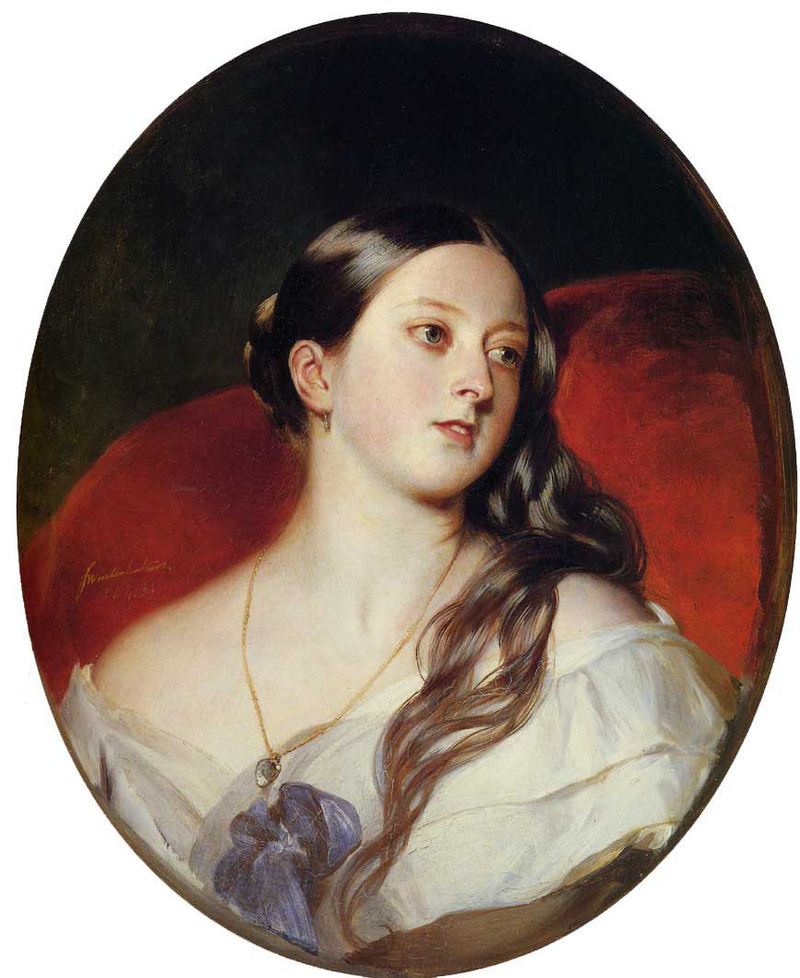 All in all, this was a successful marriage. She had herself painted in deshabillé for him, he reciprocated by always being there for her. Together, they had nine children. Albert was a firm believer in bringing up children with plenty of light and air, and in difference to Victoria’s isolated childhood, her large brood grew up in a home full of noise and laughter. I believe both Victoria and Albert wanted to compensate for their own unhappy childhoods – Victoria’s we have touched upon above, Albert’s was somewhat more dramatic, seeing as his mother was exiled from court and he was never allowed to see her again.
By the time the couple was entering into their forties, life was good – even very good. Yes, Albert suffered from some sort of chronic disease to his bowels, but it was a manageable matter. In 1861, Victoria’s mother died. She was quite affected by this, and Albert moved in to take over more of her duties so as to give her time to grieve. There was also the matter of the worrying rumours concerning their eldest son – apparently the future Edward VII was engaging in an affair with an actress. Victoria and Albert were horrified, and Albert set off post-chase to knock some sense into junior. (And for those of us who enjoyed the TV series Lily Langtry, we know just how well that worked out…)

Whatever the case, all these extra duties had a negative impact on Albert’s health. In December of 1861 he contracted typhus, and some days later he was dead. Dead. Gone from this world in the prime of his life, and Victoria was utterly devastated. The person she had come to rely on in all matters, the father of her children but first and foremost her husband, her companion through life, was no more, and she couldn’t quite fathom how she was to go on. Life, Victoria surely felt, had ended for her as well.
It hadn’t. In fact, she was to live on for 39 more years – always dressed in black. Her stockings were black. Her gloves were black. Her bonnets were black. Not so sure about her underwear…Initially, she retired almost completely from public life, incapable of facing the world without Albert at her side. As her isolation continued, people began to mutter. After all, the queen had duties to attend to, and all this grieving was considered excessive – borderline hysterical. Typical of a woman, to allow herself to be so dragged down by the loss of her husband, yet again underlining the relative frailty of the female gender. 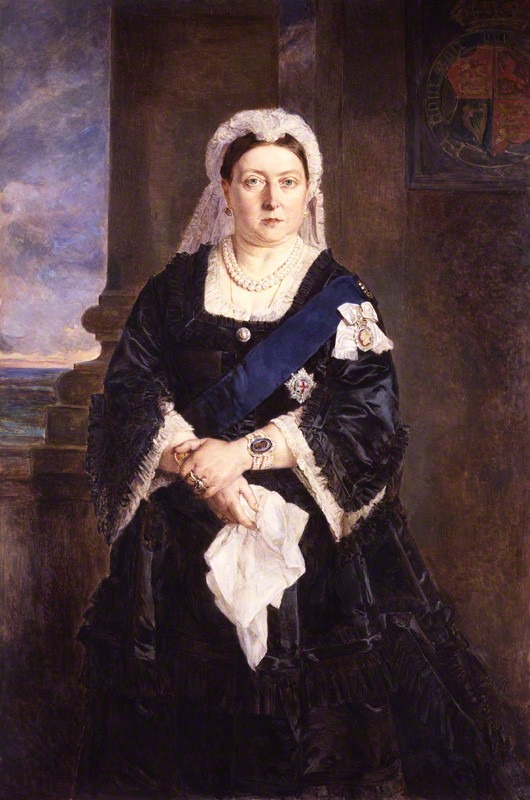 Some years later, Victoria rallied. A bit. She began to make public appearance in 1866 – but they were few and far between. Criticism mounted, and the once so popular queen was viewed askance – she should pull herself up by her bootstraps and get on with things. Ironically, her popularity rebounded after a failed assassination attempt, and by the time of the Jubilees she was restored to the position of Very Beloved Queen. Plus, of course, we have the presence of Mr Brown, Victoria’s faithful servant and (some say) potential lover. Did this mean she missed her dead husband less? I don’t think so…
Over time, Victoria’s family expanded as her children married and presented her with forty-odd grandchildren. More or less all modern European royalty is descended from this rather imposing lady and her so beloved husband. A big, bustling family, and at its midst, Victoria, always alone despite all the people that surrounded her. Alone.
To some it is granted to meet that one in a million person. Eyes meet, hearts click, and life goes on in joyous symbiosis. But such love comes at a price – all things in life come at a price – and when the other half dies, he (or she) leaves the partner torn apart, bleeding from wounds no one can see – or comprehend. 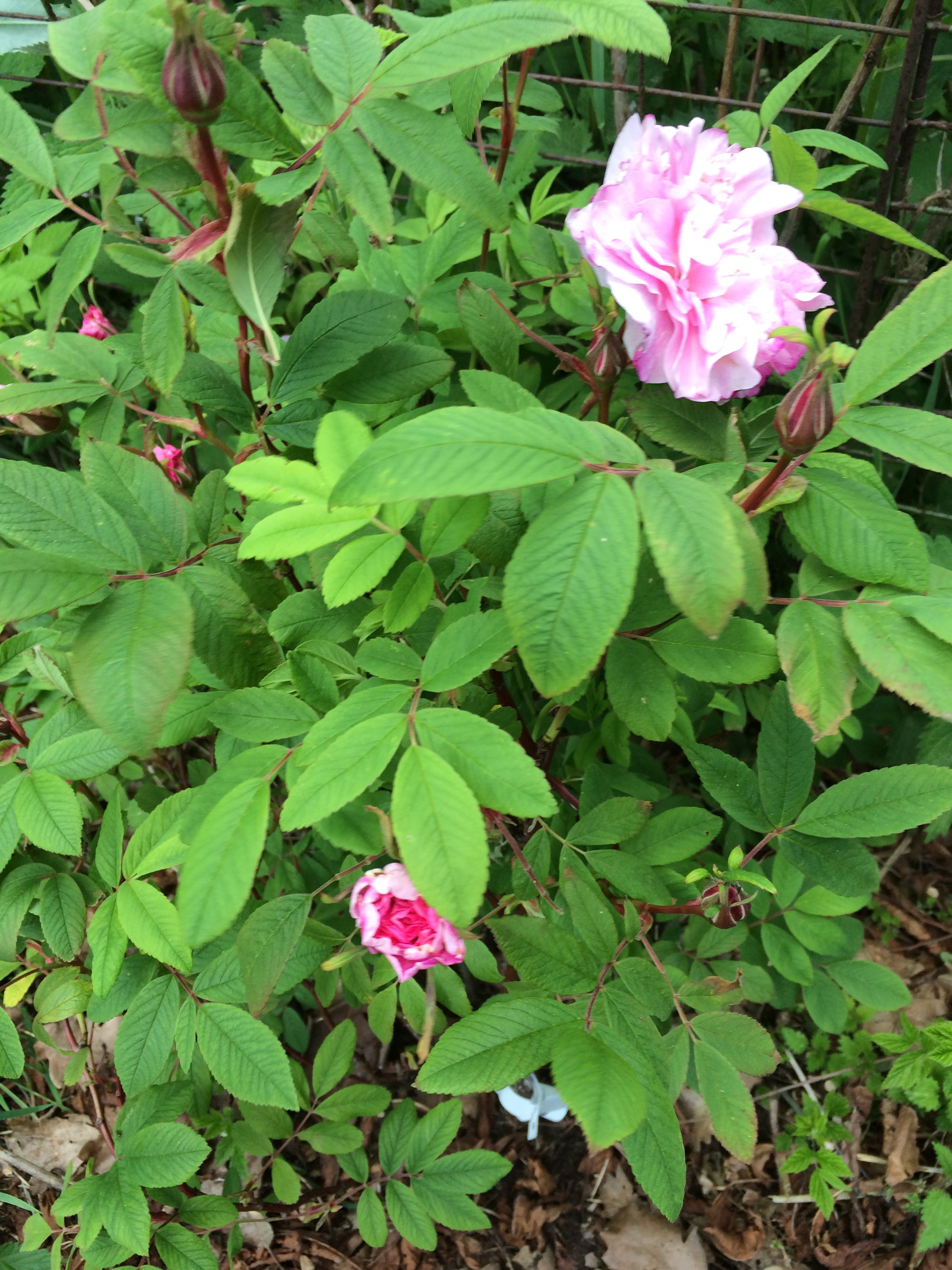 Over time, scabs form – humans are nothing if not resilient – but the pain, the loss is always there. At first, one lives in the hope that it is all a nightmare, that soon enough one will wake up and there he’ll be, smiling tenderly as he wipes away the tears. With time, one reconciles to the fact that he is gone, but at times, out of the corner of the eye, one sees a familiar shape, and hope clutches at the heart, throngs the throat with tears. That, I believe, is how it was for Victoria. That is how it is for all who love and lose. But, as a certain Tennyson put it, “‘Tis better to have loved and lost, than never to have loved at all.” And you know what? I think Victoria would agree.