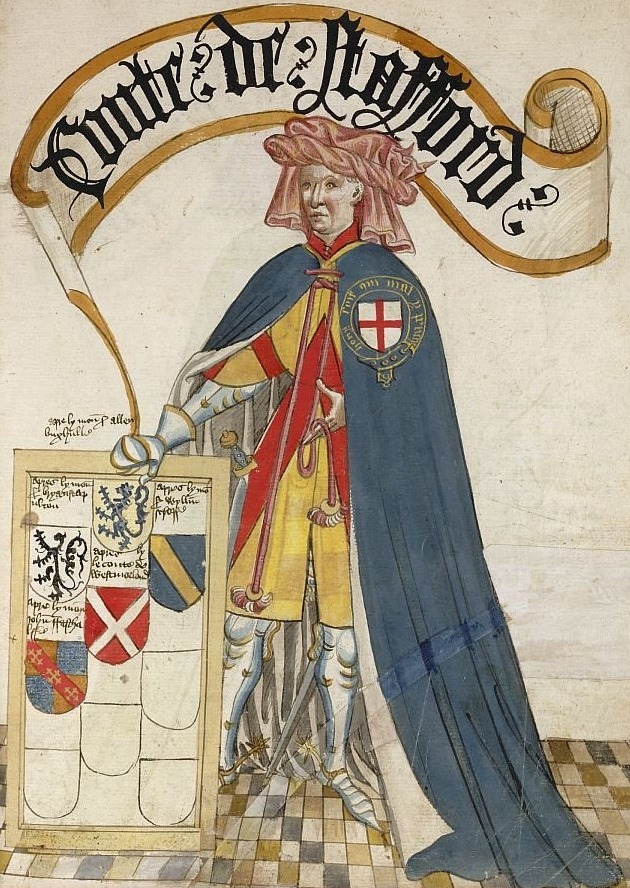 Today, I’d like you to meet Ralph Stafford. I will come clean right from the start and say that I am in two minds about this gentleman, but I’m guessing my opinion is pretty irrelevant to a man who has been dead 600 years and counting. It’s not as if dissing him on FB is an option…
Ralph was born around the turn of the 14th century, the son of a minor baron. Essentially, our man of the day is famous for two things: he was an active participant in the tunnel plot which led to Roger Mortimer’s arrest and subsequent execution in 1330, thereby allowing Edward III to finally begin ruling in his own name, and he had a most unconventional approach to finding himself a bride.
The tunnel plot we will return to in another post (think nervous young men, a tunnel under Nottingham Castle, smoking torches, and the certainty that if they failed, they’d all be dead come morning), so today we shall take a look at Ralph Stafford, the not-so-subtle seducer.
Ralph was, as stated above, the son of a minor nobleman. Yes, he was titled, but he didn’t quite have the means to go splashing about as nobles of the day were expected to do. Ralph had to be careful with his income, and in a court headed by King Edward III, by all accounts a young man who was rather fond of dressing grandly, it was hard to keep up.
Plus, of course, a nobleman needed horses and servants and armour – and a wife.
In 1326, Ralph married his first wife, a Katherine Hastings of which we know little beyond her name and the fact that she gave Ralph two daughters before passing away. Obviously, under such circumstances it was expected the relatively young Baron Stafford would marry again – if nothing else to produce a male heir. 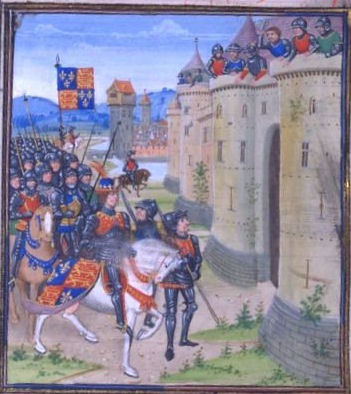 Ralph’s career was helped by his involvement in the tunnel plot. King Edward was grateful to the men who had rid him off the Mortimer yoke, and Stafford was given ample opportunity to put his best foot forward, which he did both in the king’s various Scottish campaigns but also as an ambassador abroad, accompanying senior nobleman Hugh de Audley on various occasions.
Hugh de Audley was the former brother-in-law to Hugh Despenser – Edward II’s favourite who to some extent caused the conflict that led to Edward II being deposed and replaced by his son (with proud mama Queen Isabella and Roger Mortimer taking over the day-to-day ruling). Hugh’s wife, Margaret de Clare, was one of three sisters to Gilbert de Clare, Earl of Gloucester, who died at Bannockburn. In one fell swoop, the de Clare sisters (or their husbands) became filthily rich – albeit that Lord Despenser, married to Eleanor de Clare, did his best to hog the lion’s share.
By the time Ralph entered Hugh’s orbit, Despenser was long since dead and Margaret de Clare had been assigned a fair share of her patrimony, making Hugh a very rich man. The Hugh and Margaret marriage had resulted in one child, yet another Margaret, who was born in 1320 or thereabouts. Margaret junior was therefore a VERY rich and eligible heiress. Plus, as an extra layer of icing to this already quite irresistible cake, through her mother she was the great-granddaughter of Edward I.
At the time, Ralph remained a relatively poor Lord Stafford. He was close to twenty years Margaret’s senior, and yet he was so smitten he upped and abducted her in 1336. Question, of course, is was he smitten with her, or her money?

Now, I’m hoping it wasn’t only about the money. Yes, yes, I know: it just goes to show I’m an incorrigible romantic, but still. I’m hoping he liked the way she laughed, or that she found him gallant and handsome despite him being as old as 35. Maybe there was something about his eyes that made her blush, or perhaps it was the curve of her hips that had him thinking of beds and pillows. Not only about the money, despite her being worth ten times as much as him.
The fact that Ralph had to resort to abducting his bride indicated Hugh de Audley had other plans for his precious daughter. With her lineage and money, she’d attract suitors like a queen bee does drones, and Hugh was probably thinking minimum an earl. Instead, that uppity Stafford took it upon himself to steal her away – his precious Maggie, in the arms of a bride-snatcher! Hugh threw a hissy-fit. So did his wife. Off they stormed to see the king and demand redress.
At the time, having abducted Margaret – and I imagine he would also have made sure he’d bedded her – Ralph had the upper hand: the de Audley daughter was spoiled goods, and the parents had little choice but to bow to the inevitable and allow them to wed. But their pride was smarting, besides which they may have been genuinely concerned for their poor daughter, especially if there were none of the romance ingredients I hoped for above. After all, it happened now and then that women were forcibly abducted and ashamed into marrying men they definitely did not want. (Like poor Alice de Lacy)
The king, however, would not hear one cross word against his trusted Ralph. Instead, he advocated ensuring the happy couple was married as soon as possible. Seeing as Edward was happily married to his Philippa, I am hoping he’d not have reached such a conclusion without verifying the bride was not totally adverse, but who knows…
Hugh blustered. He cursed. His wife wept and begged. The king insisted this was for the best, and so as to sweeten this unpalatable situation, he made Hugh de Audley an Earl, investing in him the title of Earl of Gloucester, dormant since Gilbert de Clare’s rather unnecessary if gallant death at Bannockburn.
“An earl?” Hugh de Audley said. “Me, Sire?”
“Assuredly you!” Edward clapped him on the shoulder. “A good man, a trusted servant – and a soon to be father-in-law to my very, very dear friend Ralph.”
“Oh.” Hugh looked at his wife, back at the king. “An earl, you say?”
The king inclined his head to Margaret. “Earl of Gloucester, in honour of your wife’s illustrious ancestors.”
Margaret beamed – until she recalled she shouldn’t be beaming, she should be most aggrieved, what with her poor daughter and all that. 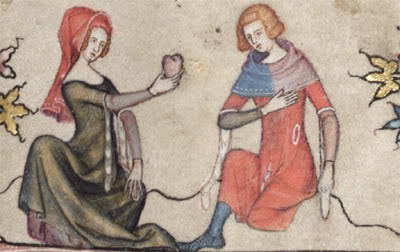 And so, in 1336 Margaret de Audley was married to Ralph Stafford. Our formerly borderline poor nobleman was now among the wealthier men in the land – and he had a wife who would go on to give him eight children. I take that as some sort of proof they were at least tolerably happy with each other.
Ralph was to become wealthy in his own right. As one of the king’s most trusted men, he was given several lucrative positions – plus the war in France gave ample opportunities for rich ransoms. And in 1350, Ralph himself was elevated to Earl of Stafford, a title his descendants would hold on to until, some years down the line, his great-grandson took yet another leap upwards and became the first Duke of Buckingham. Two generations further down, and the then Duke of Buckingham was beheaded for treason in 1483 – but that, as they say, is an entirely different story.

7 thoughts on “Taking matters (or her) in his own hands”