In the lost mists of time, long before the advent of monotheist religions, man worshiped Mother Nature. Time passed, civilisations developed, and somewhere 4 000 years ago, the old veneration for Mother Nature – a most female deity – was replaced by the decidedly male God of the Hebrews, soon to become the equally male God of Christians and Muslims.
A Patriarch God preferred male servants – or so the male servants said. Scripture abounds with examples putting women in their place – below men. St Paul states that “woman was created for the sake of man” and men like Thomas of Aquino did women a disservice when he described us as being intellectually inferior to men, weak vessels that did best in acknowledging man’s supremacy. (Huh: consider the notion of men going through childbirth – repeatedly – and then let’s talk about who’s weak and who isn’t…)

Further to this, woman was much more susceptible to sin than men – after all, it was Eve, not Adam, who ate that famous apple. And let us not get into the myth of Lilith, that ultimate apocryphal seductress, proving once and for all that woman was susceptible to lust, a creature ruled by her carnal desires and adept at entrapping men in her web of sensual pleasures. Ugh, said Thomas of Aquino, wrinkling his nose. Seriously, he added, sex for pleasure is a sin, and women are most sinful of all.
It suited the powerful Church to relegate women to the fringes of things. By combining a subtle defamation campaign along the lines described above with the often repeated “truth” that women are weak and need male protectors, women were eased out of almost all positions of power – at least officially.

Women who chose not to listen, or who continued to draw on ancient knowledge to heal and help others were viewed with distrust. Witches, their uneducated neighbours would whisper – but more in awe than in fear. Initially, however, the Church scoffed at the concept of magic and witches, stating that such things did not exist, and it was very rare for anyone to be accused of witchcraft. But in the 15th century, things began to change.
For one thing, the Church was battling an increased number of heretics, and secondly, popular belief began to equate witches with heretics – in the sense that a witch, per definition, worshiped Satan. A papal bull late in the century and the publication of the Malleus Maleficarum (The Witch Hammer) in 1487 effectively created an open season on witches – most of whom were female (of course, what with us being weak and sinful to begin with…)

Things didn’t explode until late in the 16th century. The tensions of the Reformation coupled with the general instability of the times created fertile ground for witch hunters, and suddenly there were witches crawling out of every fissure in the ground, both on the Continent and in Britain. No matter how many voices were raised protesting the barbaric practices of torturing a woman to extract her confession of being a witch, they didn’t help – especially not when such prominent figures as James VI of Scotland loudly argued that witches did exist and had to be fought with whatever means possible. (He wasn’t alone: his royal Danish brother-in-law, Christian IV, expressed exactly the same views)
Enter the Witch-finder, usually a man, who claimed to have the ability of identifying all potential witches. One such man was Matthew Hopkins, and what childish dreams he may have had regarding what he wanted to be when he grew up we will never know, as essentially nothing is known of Matthew Hopkins until that day in 1645 when out he pops of the woodwork, a self-proclaimed Witch-finder General.
At the time, Hopkins was a young man, some years and twenty, and over the coming years he was to more or less single-handedly cause the death by hanging of 300 witches (mostly women) Given that it is estimated the total number of people executed for witchery in England is around 500, one can but assume that Hopkins took to being a Witch-finder as fish take to water.
He extracted confessions through various creative procedures, such as sleep deprivation and “pricking”, whereby the accused was shaved of all body hair and submitted to being pricked with a long, sharp needle. Should the needle hit upon a point that didn’t bleed – well, obviously the naked terrified woman being inspected was a witch. 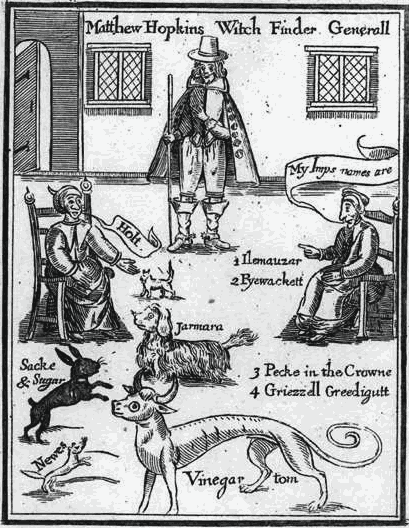 Fortunately for the women of England, Hopkins died in 1647 – still a number of years shy of his thirtieth birthday. At the time, his methods were already being questioned, and a number of people were speaking out against him, accusing him of being a cheat (duh), more motivated by the money involved than by any genuine desire to cleanse the world of real evil.
Unfortunately for several women in the New World, Hopkins was very proud of his methods – so proud he wrote a handbook, called The Discovery of Witches, published the same year he so opportunely died. This book was taken as the ultimate guide in how to find witches – at least in the Colonies – and indirectly Hopkins would thereby cause a number of further deaths in America – long after he was dead.
This little handbook offered a number of alternatives as to how to reveal a witch. Sleep deprivation and pricking have already been mentioned, but Hopkins was also a warm advocate of the swimming test, whereby the unfortunate woman was tied up and thrown into the water. If she floated, she was a witch, if she sank she was innocent. Most people float – at least initially – when thrown in water. And once they start sinking, chances are they’re already more dead than alive… (Incidentally, if you want to read an excellent fictionalised depiction of a woman being subjected to all this, I warmly recommend Ann Swinfen’s Flood)

Over the coming years, Hopkins’ methods would be applied to a number of unfortunates, starting with poor Margaret Jones, a Boston midwife who was hanged as a witch in 1648. His suggested approach to witch discovery was also used at the notorious Salem Trials of the 1690’s, and the swimming test would continued in use for a number of decades after that, as testified by the sad case of Grace Sherwood, who was ducked in 1706, had the misfortune (or not) to float, and accordingly spent the following eight years in prison for witchcraft. (Grace’s story I’ve covered in a previous post)
Over time, the voice of reason prevailed. Over time, men would yet again scoff at the ridiculous notion of witches. Sadly, that reaction came too late to save the estimated 50 000 people, 75% of which were women, who were executed during those centuries when it sufficed to point finger and yell “witch” to bring that person’s life tumbling down.

21 thoughts on “Thou shalt not suffer a witch to live”