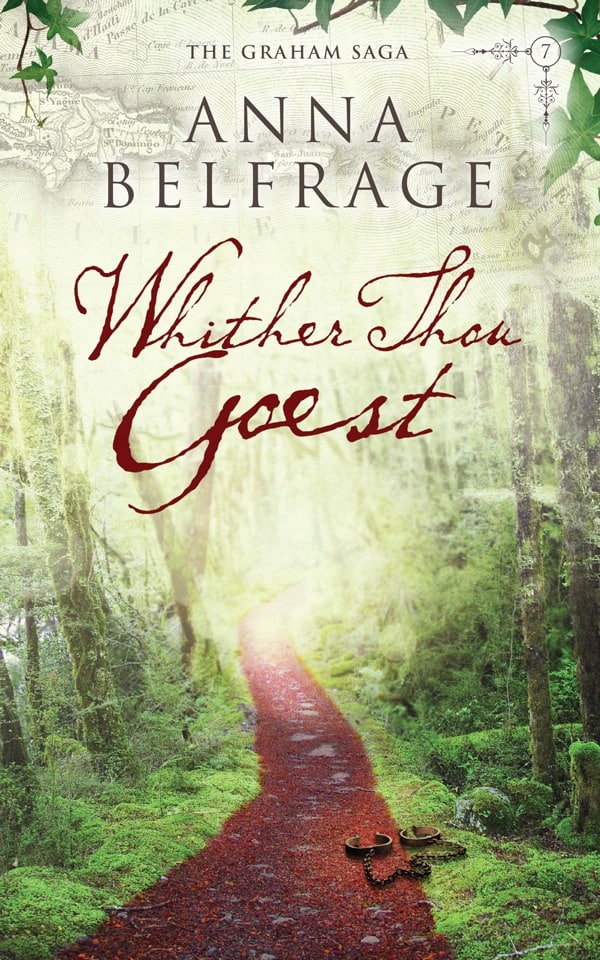 On November 1, the seventh book in The Graham Saga was published. Seven books.. Each book is around 120 000 words, and I’d calculate I have re-written more or less every word at least thrice as I’ve edited and hones, added and detracted. So seven books is the equivalent of 2 500 000 words – and this from a person who types with three fingers…

So what is this seventh book about? And how can a series extend over so many books and still bring something new to the table?

Starting with the last question first, I sincerely hope that is the case. And yes, there is an overall blueprint to which the books adhere. The difficulty lies in developing the characters – and keeping them true to themselves. Building different plots for each book is “easy” in comparison, and in Whither Thou Goest I am helped by the setting – my protagonists get to spend time in the Caribbean, very different from their home in Maryland….

Why the Caribbean? Well, I like the Caribbean. Sun, sand, sea and Kenny Rogers/Dolly Parton crooning Islands in the Stream – oops! that was anachronistic, as in the 17th century spending time on the beach was not about to happen – not unless adequately swathed in covering clothes and a hat, which sort of precludes running shrieking through the surf…

Actually, the Caribbean is about more than sun and sea. Those islands in the stream have their own fascinating history, and there was a lot of stuff happening in the area during the 17th century. Like pirates and the constant conflicts with Spain. Like the development of the slave trade – that huge blot on human history. At the beginning of the 17th century, most of the labour on the plantation fields were bond servants of one sort or other, white men who had a finite number of years of servitude to pay for their own passage. By the end of the century, the people toiling in the sun were black, and there was nothing finite about their period of servitude – they were chattels, accorded no human rights.

There were, however, white men who also ended up as slaves under the Caribbean sun. These were men of strong convictions – or who belonged to the “wrong” faith, like the 30 000 Irishmen Cromwell had deported to Barbados merely on the fact that they were Catholic. One such man is Matthew Graham’s nephew, Charlie. This young man fell under the spell of the Duke of Monmouth and joined in the duke’s ill-fated rebellion, which is why he has been condemned to live out his days in chains on a Barbados plantation.

It was quick, this transformation from human to beast. On the ship out, there had been desultory talk, a sharing of stories and hopes that allowed them to hang on to some scrap of basic humanity. Here, there was no talk on the fields, none of them had the breath for it, and at night, they collapsed to sleep as best they could, exhausted beyond the point of rational thought.
Starved already to begin with, the insufficient rations weakened him further, and the gruelling work under a punishing sun left him – all of them – a walking skeleton in less than a month. Charlie stole where he could. He ate anything set before him, he bullied the weaker of his companions into sharing with him, and while the others died, he remained alive. Alive, but a beast, an obedient slave that mumbled yes, massa, no, massa like the blacks did, that dragged and carried load after load of heavy cane to the voracious sugar mills from sunrise to well after sunset.
His skin no longer flamed under the sun, having tanned into a permanent reddish brown decorated with a scattering of uneven white circles where blisters had formed and healed. He was beaten for not being fast enough, he was whipped for standing for a moment in the shade to rest. He had the last remnant of the old Charlie Graham removed when his breeches were ripped off him and replaced by a linen clout, and still he survived, forcing his battered, starved body to work and eat, work and eat.

Obviously, Matthew Graham feels obliged to save his unfortunate nephew. Where Matthw goes, there goes Alex, reluctant to ever again let her husband out of her sight – look what happened to him last time that happened, him returning to her barely alive…

Whither Thou Goest is available from various on-line retailers (and some book shops) such as Amazon.

1 thought on “Number seven sees the light of day!”