Today I was at the dentist. I hate going to the dentist. No, wait; that doesn’t quite cover it. For days before a planned visit I have a constant stomach ache, and on the day itself my palms are sweaty, my knees are wobbly and all I want to do is flee. Don’t get me wrong, I have a wonderful dentist – now. It used to be I didn’t… Anyway, for a person with such dentist issues having to book an extra appointment is no fun, but as dental health is a prerequisite for a long life – and I do want a long life, preferably accompanied by good food, excellent chocolates and masses of tea – I had no choice.

I sat in the waiting room trying to submerge myself in a magazine when a woman of my age was escorted through the inner door by a dental nurse. It’s strange, isn’t it, how quickly you cotton on to the fact that something is not entirely right with a person by how others talk to them. In this case the nurse was soothing and chirpy, spoke slowly and loudly. The woman in question just beamed, her smile widening even more when the large man who had until then been sitting in a corner rose and moved towards her. It was as if her whole face was lit from within, her beautiful eyes hanging off him.

The man smiled at her, discussed things with the nurse and placed the woman close by his side while he paid and arranged for a new visit. All the time the woman smiled – somewhat vacantly. As they turned to leave, he took her by the arm and said “come now, dearie, let’s find your jacket, shall we?”. His hold was so gentle, his voice was so soft, and without having an idea of if I’m right or not, I immediately conjured up an image of a couple that went way back, a happy couple until something happened to her, robbing her of several central elements to her personality – but he still loves her, maybe more of because of what she was than what she is now…

Whatever the case, the woman nodded and followed him obediently. He helped her into the jacket, hands lingering over her arms, her shoulders. All the while he kept on talking to her, explaining what he was doing, and she just smiled and smiled. Whether or not he loved her or not, it was evident to anyone not blind that the woman adored him, and from the way his fingers followed the contours of her back once she was adequately swathed in her (far too big) jacket I’d bet he loves her too. Me, I was mainly entranced by how gentle his touch was. Every single one of her moves he dictated with his fingers, all the way from the coat hanger to the door, and it was like watching a butterfly caress a rose, light flutters of square, competent digits that had her leaning back against his hand, that glorious smile of hers widening even more.

Well, after that rather beautiful experience I floated to my feet when the dentist called my name, sort of hovered in his wake all the way to his room and the waiting dentist’s chair – upon which all the happy, gooey feeling left me in a rush. My dentist chuckled, indicated I should sit and then followed some minutes of clenched fists, constricted breathing and cold sweat in elbow creases – all of it very ridiculous, as my dentist is also possessed of gentle, careful hands that go about their business with as little discomfort as possible.

To distract me, my dentist tends to talk politics or philosophy or cooking as he works, now and then stopping to ask my opinion. As it’s difficult to say much more than “aaaa” with a drill and a suction hose in your mouth, you can well imagine just how one-sided these conversations are, but I must say I learn a lot, having been gifted with a dentist whose intellectual interests expand very far beyond dental health. This time he expounded on the sad state of the schooling system (and let’s not go there – not in this post) while he repaired my cracked filling. His warm hands would now and then correct the angle of my jaw, adjust the bib and sooner than I’d expected he was done. Phew. I gulped a couple of deep breaths to re-oxygenate my blood and sat up.
“Hang on,” he said as I stood, “you have something…” He reached forward and wiped something off my cheek, and once again I was struck by how sometimes big men have fingers as lightweight as gossamer.

Men are capable of the most fantastic gentleness – maybe even more fantastic because it can, at times, be in such contrast to their rather impressive physiques. My eldest son is my own personal favourite hunk, and I must say he comes across as all muscle, more muscle and even more muscle. But when he wraps his arms around me and gives me a hug, or when he rubs his bearded cheek against mine, it is the warmth and softness of his hold/touch that resonates with me. 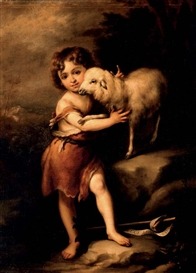 Murillo, St John and a lamb

It also throws me back to when he was a little boy, all long, uncoordinated limbs that would in passing fly out and land smack in the middle of one of his brothers’ face (mostly unintentional. Now and then, more than intentional…) causing one child to cry while the eldest crouched down to hug and soothe, saying he was so sorry. His hands would wipe at tears, try to re-set the dislocated elbow or sprained foot or bleeding lip, all the while moving over his brother’s skin with the utmost gentleness. He has the same approach to babies and dogs, and cats and – I hope, not being in a position to double check – women. His brothers (and his wonderful father) are the same; big strong boys with voices that went husky long before adolescence and hands that are gentle and soothing, strong and warm but always, always gentle.

Yes, I know that men are over-represented in the violent crime statistics all over the world. Men lash out, they punch and stab, and someone lies gasping at their feet. But that’s not ALL men – in fact, it is but a fraction of a percent (if that) of all men. And anyway, this post is about the men whose touch is like the kiss of a firefly on a sore joint, whose fingers draw patterns over exposed skin, who lay a warm, callused palm on your leg and squeeze to tell you that they’re there should you need them. It is about all those fathers who lead by example, who take the time to teach their sons how important it is to never use their greater strength to intimidate or hurt.

To all the wonderful men that help their women through their days and lives, to the men that lift their children and hoist them in the air, arms held out to catch them as they come hurtling back down, this is for you. To the men who cradle their babies as if they were made of glass, to the men who blow on scraped knees, who place a hand at the waist of their woman and envelop them in a slow dance, to the men who sits their weeping child in their lap and patiently listens and cuddles, this is for you. And especially, of course, this is for him, the man in my life, whose fingers always widen to braid themselves round mine when we go for a walk.

Oh; and hey, this is for my excellent dentist as well!