I like wandering round in churches, and on a recent visit to the Church of Holy Trinity in Kristianstad, I spent my time perusing the gravestones that line the walls of the church.

The church was built in the early seventeenth century, and as was the custom rich people were often buried directly under the church floor – assuming they paid for the privilege, of course. The problem in this particular church is that it is built more or less directly on rock, i.e. the graves became per necessity very shallow. As a consequence, the odour of decaying bodies very quickly became an issue – especially in summer – and the church was obliged to open all its doors prior to any services so as to air the interior. Still, well into the 19th century the hoity toity dead were buried inside the church, no doubt quite the tangible reminder to the people attending church of just how ephemeral life on earth is… I suppose the congregation was much relieved when it was decided to discontinue with this practise.

Old churches need to be renovated now and then, even this particular church. During one such renovation, the old graves under the floor were empties, whatever bodily parts remained thrown into a communal grave and the gravestones were instead placed along the church walls – inside and outside. Most of the inscriptions are illegible, but here and there is a tastefully executed skeleton holding a scythe, and  two stones have engraved images of the man and woman once buried beneath them, preserved for posteriority in all their worldly splendour. These people were once members of the ruling elite – now they are but dust and splintered bones, lying helter skelter in a communal grave. I wonder what they’d think about that ? 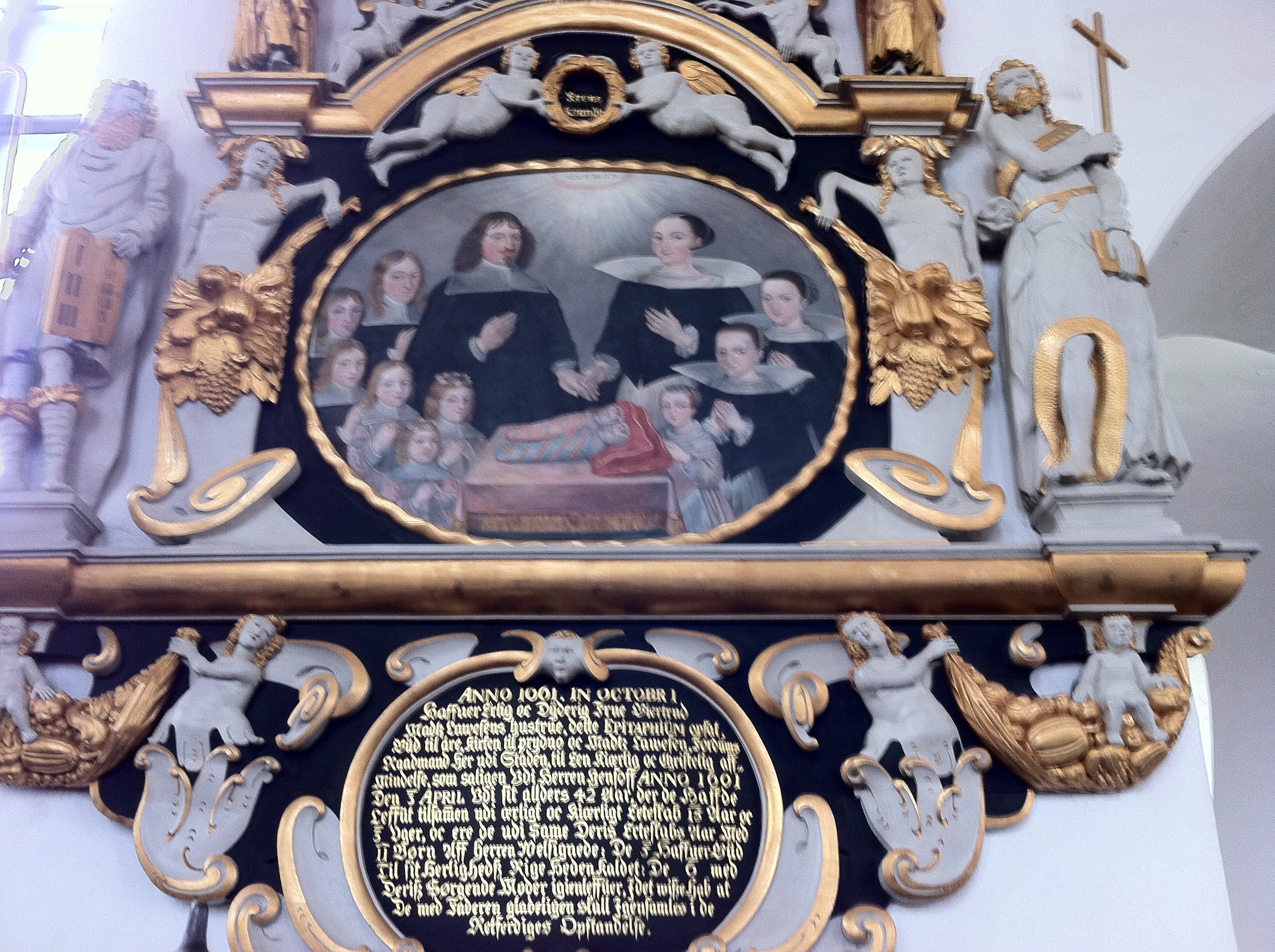 On one wall hangs a beautiful epitaph, donated to the church by a grieving widow. Her husband, Mads Lavesen, had recently died at the age of 42, and the epitaph was a commemoration of his life – or rather their life together. They’d been married for 15 years and 3 weeks and had during that time produced 11 children, five of which were already dead. Poignantly, all the children are depicted on the epitaph – the live ones in sober black, the dead in shimmering pinks and with flower wreaths on their heads. The inscription ends in hope as the widow states that she expects to be reunited with both her husband and all her children after the Resurrection.

It breathes trust and faith, this little piece of art. Trust in the afterlife, faith in that God will take care of her and her numerous family. As I stand before it, I experience a feeling of sadness – not for her, the woman who has depicted herself holding hands with her husband and surrounded by all the children she has given birth to, but for us, the people of today, who to a large extent have been raised to believe in Science rather than God, who have lost touch with the faith that was such a fundamental part of our ancestors’ lives and who, as a consequence, have nothing to hold on to as life approaches its natural end.

I am not about to launch myself into a discussion about faith – mainly because I perceive this to be of a very private issue. But at times I do reflect that in this brave new world of ours it is difficult to openly profess a religious inclination, as that is the equivalent of leaving yourself open to ridicule. Today – at least where I live – atheism seems to be the thing. People cite scientific truths as examples of why God doesn’t exist, the miracles that populate our world are deconstructed into biology and chemistry or physics.

Frankly, I don’t care if people believe in God or not. But I am worried that when we break down our world into formulas and genetic patterns, when we believe ourselves to have the right to patent plants that have been around as long as we have, when we think it is okay to tinker with DNA, we might be corrupting an invisible pattern. Also, once you can explain a sunset in terms of radiation and spectra, will you still be capable of savouring the sheer beauty of it? Doesn’t deconstruction per definition take away some of the awe? Look at a hawk as it plunges through the air; some of us will crane our heads back, entranced by this embodiment of perfect design. Others will start talking about hollow bones and wing span, about the forces required to keep the lightweight bird airborne. Yes, interesting to know – as long as we remember that knowing the HOW does not necessarily answer the WHY. After all, just because we understand how it flies doesn’t mean we understand why it’s there to begin with. 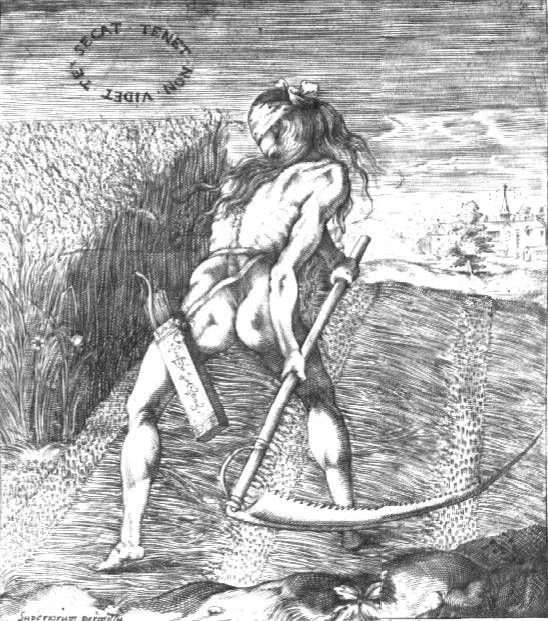 Back to death, that final equalizer that all of us will at some point experience. (Unless you’re hoping to become a vampire or some other form of immortal. It makes me shiver inside to consider  eternal life. Being around for ever probably takes a lot of shine out of it, don’t you think?) As one grows older, there comes a point in life when you realise there’s less life ahead of you than behind you. That’s when existential issues become relevant – and personal. This is also when believing in an afterlife is a huge comfort, because it makes us (me at least) feel so inconsequential to accept death as being the end. After all, there’s so much more to us than skin and bones, we’re all much more than the sum total of our kilos. All the knowledge, all those experiences we’ve accumulated along the way, do they simply vanish into thin air when we die? I guess the rational answer to that question is yes – well, assuming things DO end when our heart stops beating.

When I wander through churches and graveyards, when I peer at fading engravings and read my way through epitaphs and quotations from the Bible, I can’t help but feeling a bit jealous of the certainty with which our forebears faced death. To most of them it was a given truth that life – or rather existence – continued in some form or other after death. Some must have shivered in fear as they contemplated an eternity in hell. Others must have swallowed and hoped their stay in Purgatory would be short. (As a little point of interest; Purgatory as a concept didn’t survive the reformation – Protestants don’t believe in time-restricted hell, it’s either all in or all out.) Many, many repented on their deathbed. (Yet again; not the Protestants as their beliefs don’t allow for last minute redemption. It does, however, allow for divine mercy, so even the blackest of souls could pray to God for forgiveness.)

Almost all hoped for peace and light in the hereafter, a blissful rest after the travails of earthly life. Because we mustn’t forget that was how it was – for most of our ancestors. Life was tough and merciless, it was hunger and cold, children dying away from you, husbands being crippled in warfare, beloved wives dying in childbirth with a child you would have preferred not to have – but you weren’t allowed to say that out loud. Compared to theirs, our lives are a walk in the park – maybe so much so that we forget life by its nature is transient.

Some years ago, I was discussing faith and death with an old lady whom I knew to have a very strong belief in God. She laughed when I asked her about a hereafter in a picture perfect landscape complete with green meadows, fluffy lambs and a constant supply of tea and cake.
“Not quite like that,” she said. She grew serious and leaned towards me. “I don’t worry overmuch about it. You see, I am sure I will be taken care of as I need it. What that means…” She shrugged. “… well, I’ll have to wait and see, right?” Now that’s what I call faith, a rock solid trust that someone will take care of you, no matter what.

My husband is far more prosaic. When I ask him about life after death he shakes his head and takes my hand.
“You know I don’t believe in that,” he says, and I begin to cry, because it feels so final somehow; the day one of us dies it’s “poof” and we will never sit together like we’re doing at the moment, drinking tea and talking. And I find that thought so utterly, utterly terrible.
He takes my hand and smiles. “Hey,” he says.
“Hey yourself,” I snivel. And we won’t be holding hands either in the afterlife, will we? “You could at least say maybe,” I say, “you know, hedge your bets and say that you’re not sure, that MAYBE there’s life after death.”
“But I don’t…”
“I know,” I cut him off. I fiddle with my mug, feeling ridiculous for crying, feeling even more ridiculous for feeling so abandoned. It’s not as if he’s gone, is it? He’s sitting opposite me and holding my hand. He tightens his hold until I raise my face to his.
“A bluebell,” he says, “that’s what I want to be – once I’m dead. So every time you see one…” He leans forward to kiss my cheek. “… you’ll know I am there.”
“Huh,” I say – but feel strangely comforted. Besides, what’s to say he dies before me anyway?

I will never commission an epitaph like the one above. I will not write a text in which I express hopes to be reunited with my dear ones after death. But I hope – oh, yes I hope. And come to think of it, what better epitaph can anyone have than a flower the colour of summer skies, a flower that grows where nothing else survives, a flower that comes back year after year thereby reminding us that life does, in fact, go on.

4 thoughts on “In Memoriam”