I have recently released one of my books as an audio book under my own imprint.

I already have sixteen audio books under my belt – but they’re distributed by Blackstone publishing. In retrospect, I should maybe have held on to my audio rights to maximise my royalties, but I find it so HARD (and boring) to handle the related administration. Plus, Blackstone does a great job!
Still: this time, I decided to use Findaway voices and do it all on my own. Partly due to the royalty issue, but also because I learn so much by doing it all myself.

Thing is, I never listen to audio books. For me, a “book” is something you read.
“Then why on earth are you investing in converting your books to audio?” some of you may ask.
Well, mainly because a growing majority of peeps disagree with me. (I know! Totally inconceivable. . .)
More and more people enjoy listening their way through books as they cook, clean, drive or simply relax. In Sweden, audio book sales have been growing exponentially for some years. Audio book sales exceed the total sales of paperbacks and hardbacks combined. And as to e-books, the sales may be growing, but they are waaaaaay behind audio book in sales, to some extent because they’re very expensive.
I am not sure the Swedish trends can be taken as being relevant for the rest of the global bookmarket, but one thing seems to be consistent throughout: audio book sales are growing. Now that Spotify plan to offer them as well, I imagine new audiences may be reached.

The main reason, however, for me converting my books is Greg Patmore. He’s “my” narrator, and he has one of those voices that touches me to the core, a rumbling baryton that he so easily can shift into a tenor or an even darker bass. Mmmm . . . (This the former choir member in me speaking. Yes, sopranos are lovely and altos have depth, tenors sound tragically lyrical but a good baryton sends shivers down my spine) I have come to understand that all those audio book listeners out there tend to choose books by narrator just as often as by author. They fall in love with a voice, so to say. I find this rather interesting. Take “my” Greg, for example. He narrates books all across the various generes, so if a person decides to only listen to stuff he has narrated, they will be in for quite a varied ride. Former thriller aficionado may suddenly realise he rather likes a good paranormal romance – as long as his favourite narrator is doing the narrating.

It isn’t all that strange that people who love audio books develop preferences for a specific narrator. You see, converting your precious book into an audio is a group effort. In fact, it requires that I as the author take a step or two back, respecting Greg’s creative contribution as the narrator. Let me tell you I found that very, very difficult at first, because what happens when someone narrates your book is that they interpret it, and suddenly the emphasis is not necessarily on the words or scenes I found most relevant. (And you can read more about my initial angst and my habit of dropping eyes all over the place here) Accordingly, it took some time before Greg and I found our common mojo, but once we did things really took off. Yes, the audio books are still my books, but Greg’s contribution has added a distinctive pizazz – as distinctive to those who love hearing him narrate as my author voice is to those who love reading my books. Obviously, the combo is pure fireworks 🙂

My latest audio release is out 17th collaboration. With experience comes a certain fluidity, and the productive process is much, much smoother now.
These days, Greg can say things like “I decided to make him Welsh because it fit better” and I will go “Okay”.
Or he’ll say, “You have too many characters speaking in that scene, so now XX has a French accent so as to help distinguish her.” And I go “Okay”.
Or he’ll tell me, “It’s very repetitive, your use of this phrase. I’ve decided to cut it, as it doesn’t add anything but can irritate a listener.” Which is when I go “Okay” before frantically digging up my manuscript and groaning out loud at my SO repetitive use of this particular phrase. This leads to a more or less immediate edit of the book.

In brief, because of my cooperative efforts with Greg, my writing skills have improved, because these days I mentally “listen” to my text as I read it through. Yes, yes, I know: that’s been sage writing advice for yonks, to read your work out loud. But it isn’t only about that, it is about hearing the nuances, considering the descritive words and how they will work out loud.

Generally, when I send Greg a book to narrate, I also send him a list of the various players, adding what I perceive as their distinctive features. Over time, I’ve become better at focussing on the right distinctive features. I mean, “redhaired” won’t do much for Greg in way of guidance. But he rather likes it when I present him with a character whose distinctive feature is a voice that flows like honey. Not that he and I always agree on what such a voice may sound like, but as I have relinquished control (Umm. . . I TRY to!) to Greg on such matters, I no longer quibble about the texture of the voices. I sit back and enjoy them instead.

Well, enough about all that—I am thinking most of you aren’t all that interested in the actual process of producing an audio book. Let us instead return to the fact that I have recently published my first Audio book under my own imprint. I give you His Castilian Hawk in audio, the first in the Castilian Saga, narrated by the excellent Greg Patmore. 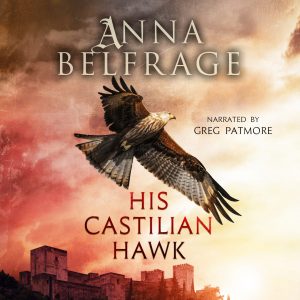 For bastard-born Robert FitzStephan, being given Eleanor d’Outremer in marriage is an honour. For Eleanor, this forced wedding is anything but a fairy tale.

Robert FitzStephan has served Edward Longshanks loyally since the age of twelve. Now he is riding with his king to once and for all bring Wales under English control.

Eleanor d’Outremer—Noor to family—lost her Castilian mother as a child and is left entirely alone when her father and brother are killed. When ordered to wed the unknown Robert FitzStephan, she has no choice but to comply.

Two strangers in a marriage bed is not easy. Things are further complicated by Noor’s blood-ties to the Welsh princes and by covetous Edith who has warmed Robert’s bed for years.

Robert’s new wife may be young and innocent, but he is soon to discover that not only is she spirited and proud, she is also brave. Because when Wales lies gasping and Edward I exacts terrible justice on the last prince and his children, Noor is determined to save at least one member of the House of Aberffraw from the English king.

Will years of ingrained service have Robert standing with his king or will he follow his heart and protect his wife, his beautiful and fierce Castilian hawk?

4 thoughts on “Pssst! Listen up – a post about audio books”