Today, I am hosting a stop on Deborah Swift’s Coffee Pot Book Club tour, featuring her book The Fortune Keeper.  This isn’t the first time Deborah visits. No wonder, as she and I share a passion for the 17th century, plus she is an intriguing lady, who has various other interests. Me, I am mostly fascinated by her taiko drumming and am hoping and hoping athat someday she’ll invite me to attend one of her sessions. (No pressure, Deborah!  😉 )

Enough about that: today is about The Fortune Keeper, a novel set somewhat earlier than the 17th century, namely in the Renaissance period. One of the supporting characters is Giulia Tofana, based on the IRL Giulia who, according to Wikipedia, was a professional poisoner. Hmm. Seems to me that would be a dangerous occupation to admit to, but it made it very easy to decide on the subject for  Deborah’s guestpost: poison. (And yes, I sometimes wonder what people would think were they to peek at a writer’s search history.)

So, Deborah, take it away!

Poison and its remedy – equally deadly?

Arsenic – the poison of kings and the king of poisons 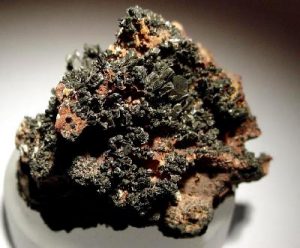 The toxic properties of arsenic were first brought to public attention by Hippocrates, who in 370 BCE described the abdominal cramps of a metalworker mining for minerals. In the 17th Century the odourless and tasteless character of white arsenic made it ideal as the undetectable poison of choice. To make arsenic, you had to heat arsenic ore to produce a white crystalline powder. The powder was soluble in water which meant it could easily be added to the unsuspecting victim’s food or drink.

This is the poison that it is widely believed was the main ingredient of Aqua Tofana, the poison named after Giulia Tofana, who supposedly killed more than six hundred men in Renaissance Italy.   Arsenic poisoning was difficult to diagnose because the symptoms could so easily be confused with food poisoning, which, in the days of no refrigeration, was a common occurrence. 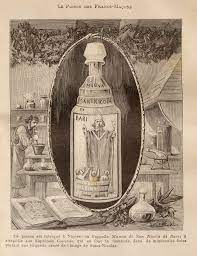 However, a large single dose could produce severe diarrhoea and vomiting, paralysis, and death within a day. Italy already a long history of poisonings, and in the 16th century the Borgia family, especially Cesare and his half sister, Lucrezia, intent on gaining power, were infamous for their poisonings , most of them probably effected by arsenic. As an aside, today the Borgias as poisoners is a disputed fact. (Anna: you can read more about that here)

‘Inheritance Powders’ became the name for these remedies used by women who wanted to rid themselves of their husbands, and in the 17th Century there was a spate of young, wealthy, married women, suddenly becoming widows.

Belladonna (Atropa belladonna) is a poisonous plant that was used in Renaissance times as a beauty aid, thus its name, “Belladonna” for the “beautiful women” of Renaissance Italy. The plant had the property of enlarging the pupils of their eyes, making them look more attractive (or so they thought)! We still use it today at the optician’s during eye examinations.

We know it in England as Deadly Nightshade — and yes, the clue is in the name.

Atropine derived from the plants is used to regulate the heart, but in the 17th Century, its ability to disturb the heart rate and kill was prized by poisoners. 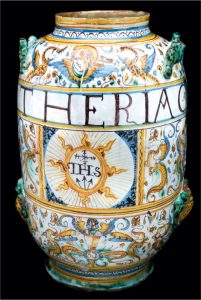 The list of ingredients in Venice Treacle is not for the faint-hearted. It was a dark sticky substance sold in jars and known as an electuary. This was supposed to be a remedy, yet as it followed the principle of “the hair of the dog”, whereby a concoction containing some of the poison would be effective against it, this probably caused even worse symptoms.

Henry of Grosmont, the 1st Duke of Lancaster wrote that “the treacle is made of poison so that it can destroy other poisons”.

For this reason, one of the main ingredients was snake flesh. People held the view that snakes contained their own antidote to protect themselves against their own venom. It was also widely believed that sin and snakes had some relationship (Garden of Eden) and that illness was brought on through sin.In Italy Venice Treacle was known locally as ‘teriaca’.

When making it, ritual was very important as teriaca was one of Venice’s most lucrative exports. Every Venetian family kept a jar for emergencies. To keep the recipe pure, the ingredients were displayed in public, then ground in public, and finally boiled in public Very few Venetian apothecaries were granted the honour of making teriaca. 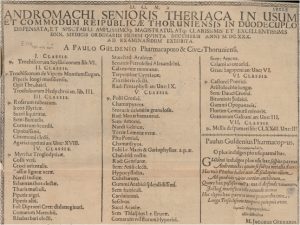 Above: From Science Direct Theriac Ingredients 1630, printed as a one-sided single-sheet flyer in the Franciscus Schnellboltz print house. The language of the recipe is Latin. One of the two surviving copies, held by the Early Books and Printed Materials Department of the Gdansk Library of the Polish Academy of Sciences.

Thank you for reading. Keep off the Theriac!

Thank you, Deborah, and I promise: no Theriac for me!

Now, onto the book! 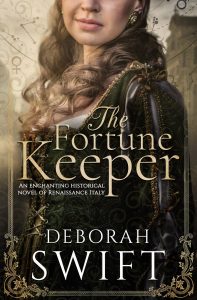 Count your nights by stars, not shadows ~ Italian Proverb

Mia Caiozzi is determined to discover her destiny by studying the science of astronomy. But her stepmother Giulia forbids her to engage in this occupation, fearing it will lead her into danger. The ideas of Galileo are banned by the Inquisition, so Mia must study in secret.

Giulia’s real name is Giulia Tofana, renowned for her poison Aqua Tofana, and she is in hiding from the Duke de Verdi’s family who are intent on revenge for the death of their brother. Giulia insists Mia should live quietly out of public view. If not, it could threaten them all. But Mia doesn’t understand this, and rebels against Giulia, determined to go her own way.

When the two secret lives collide, it has far-reaching and fatal consequences that will change Mia’s life forever.

Set amongst opulent palazzos and shimmering canals, The Fortune Keeper is the third novel of adventure and romance based on the life and legend of Giulia Tofana, the famous poisoner. 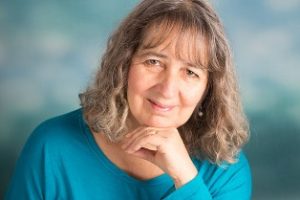 Deborah Swift is a USA TODAY bestselling author who is passionate about the past. Deborah used to be a costume designer for the BBC, before becoming a writer. Now she lives in an old English school house in a village full of 17th Century houses, near the glorious Lake District. She divides her time between writing and teaching. After taking a Masters Degree in Creative Writing, she enjoys mentoring aspiring novelists and has an award-winning historical fiction blog at her website www.deborahswift.com

Deborah loves to write about how extraordinary events in history have transformed the lives of ordinary people, and how the events of the past can live on in her books and still resonate today.

Recent books include The Poison Keeper, about the Renaissance poisoner Giulia Tofana, which was a winner of the Wishing Shelf Readers Award, and a Coffee Pot Book Club Gold Medal, and The Cipher Room set in WW2 and due for publication by Harper Collins next Spring. 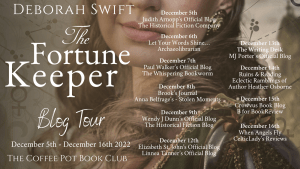 2 thoughts on “The Fortune Keeper – intrigue in Renaissance Italy!”