Sometimes, hubby and I spend several hours over the weekend solving crosswords. He is much better at it than I am, mainly because there are so many words/clues that only exist in the rarefied world of crossworders (is that even a word?) and he has been solving crosswords for yonks.

Today, one of the clues was “a part for Salome”. Well, history-minded me immediately went “Head! Head!” – except that it didn’t fit. Apparently, the part Salome wanted was a much longer word. Ultimately, we solved it (it should be “Opera-aria”, which in Swedish is one word) but I was left stuck on Salome. 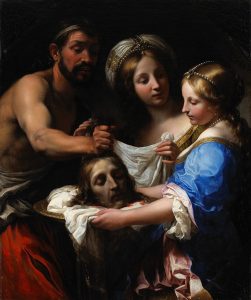 It is easy to dislike a young woman who requested the decapitated head of John the Baptist as her reward for dancing, but I am thinking there was probably more to Salome than that.

We can, of course, start by sorting out Salome’s bloodlines. She was the daughter of Herod II and Herodias, the latter being Herod’s half-niece.

Herod II was the son of Herod the Great, and one of his brothers was Antipater, another was Herod Antipas, a third Herod Archelaus and then of course there are his two brothers Alexander and Aristobulus who were murdered by their father, Herod the Great. Herod the Great seems to have been big on filicide. He was also to order the execution of Antipater, thereby causing Emperor Augustus to exclaim that it was better to be Herod’s pig than his son. Obviously, as Herod, being Jewish, did not eat pork.

Phew, quite complicated, isn’t it? It gets even more complicated when one considers that Herodias was the daughter of Aristobulus who, together with his brother, was strangled by Herod the Great on somewhat spurious accusations of treason. Fortunately for Herodias, Herod the Great had a fondness for his grandchildren, so no sooner was Aristobulus buried but his children were brought to reside with Herod the Great, likely in one of his many sprawling buildings. Herod the Great not only had a thing about filicide. He was also into architecture and construction, Commissioning buildings as varied as the Second Temple and the fortress of Masada.

Herodias was about eight when her father was executed, Whether she blamed her grandfather for it, I do not know. Some years later, she was betrothed to Herod II, who was twelve years or so older than she was. Together, they moved to Rome and in the fullness of time, along came baby Salome.

I must take a little break here, because if we’re going to be absolutely correct, we’re not certain the baby was named Salome. Some have interpreted the texts as indicating Herodias named her baby girl after herself, i.e. Herodias Jr. In the biblical references, Salome is unnamed, referred to as Herodias’ daughter or “the girl”. Jewish historian Flavius Josephus does, however, refer to her as Salome, daughter of Herod II and Herodias, who became the wife of her uncle Philip the Tetrarch.

To complicate things, Salome was not the first Salome in the Herodian dynasty. There was Salome I, sister to Herod the Great. This was not an entirely nice lady, albeit one must admire a woman who takes it upon herself to divorce her husband when she gets sick of him—even if that was against Jewish law. Her second husband she got rid off by accusing him of treason, big brother Herod the Great happy to help by having him executed. She was also a mover and shaker behind the events that led to Herod executing two of his sons. Not, in brief, a woman to have as your enemy.

In honour of his intrepid sister, Herod the Great named one of his daughters Salome. This Salome would have been Herodias half-aunt and is usually called (unsurprisingly) Salome II. Her mother was one of Herod the Great’s lesser wives and we know nothing of what happened to her or Salome II. I am hoping they melted into the fringes of thigs and lived happily ever after. Seems to me the Herodian dynasty had very few HEA moments. . . 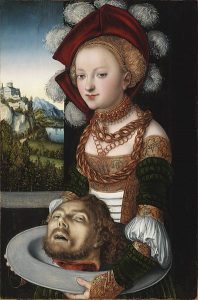 Back to today’s protagonist, Salome III. I imagine she was a welcomed baby, because if we’re to assume she was still very young when she danced so beautifully for Herod Antipas, she must have been born after several years of marriage between Herod II and Herodias. Maybe they had difficulties conceiving, or maybe they didn’t like each other and avoided bedsport. The latter seems somewhat more probable when one considers that somewhere around AD 20-30, Herodias divorced her husband. Okay, so Herod II actively divorced her too, but she seems to have taken the initiative. You see, Herodias had set her eyes on Herod Antipas, her hubby’s younger brother.

Herod Antipas had travelled to Rome for various reasons, among others to see his brother, Herod II. There he met Herodias and he seems to have been as besotted by her as she was with him, but there was a teensy-weensy problem. Two, actually. First, Herod Antipas was married to Phasaelis, one of those royal dynastic marriages made to ensure cordial relationships with bordering countries and kings, in this case king Aretas of Nabatea. Secondly, while Herodias was divorced, Jewish law frowned on marriage if the first spouse was still alive, which Herod II most certainly was.

Well Herodias she spat and spat on the stone, and after some time, Herod Antipas decided love had to come first, divorcing his wife and sending her back to her father. Thereby, he effectively sealed his own fate, but this was something he was blissfully unaware of at the time, more than happy to instead spend his time with fair Herodias.

One person who was rather voluble in his criticism of Herod Antipas and Herodias’ marriage was John the Baptist. In his eyes, Herodias could not/should not marry, referring to the fact that Herod II was still alive and kicking. Herodias resented John for this and demanded that he be locked up. Herod Antipas did some hemming and hawing. He enjoyed John’s company, found his preaching invigorating, even, but his wife was adamant and so John ended up imprisoned.

And now, dear peeps, we are approaching the climax of this story. Given what was to transpire, I reiterate that Salome must have been very young. Alternatively, she was a tad simple, affected by all the intermarriage up her bloodlines. After all, her mother married her half-uncle who was also her cousin and her grandfather was married to his first cousin. Still, I lean towards her being young, especially since I’ve found a suggested birth date of 15 A.D., which would make her fifteen at the time. 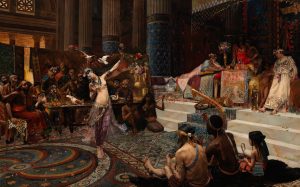 Salome was considered beautiful, and to entertain his guests, Herod Antipas urged her to dance. As the myth of the dancing Salome has evolved, so has the dance. While there is no reference to what kind of dance she danced in the Bible, these days we say she danced the Dance of the Seven Veils, which is essentially a 19th century invention. Blame Oscar Wilde, if you will. The more lurid depictions insinuate she was more or less naked under all those veils, and once the last one fell, she was revealed in all her glory for Herod Antipas’ guests. Not a likely scenario, IMO. Salome was a Jewish princess, and such ladies did not go about disrobing themselves before others than their husband or women servants. 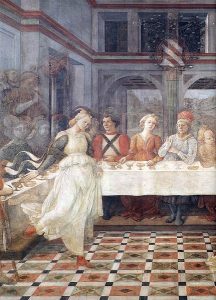 Whatever the dance, Salome felt entitled to a reward for shaking her booty alluringly. And I imagine it was rather uncommon for a princess to do the entertaining. Maybe she also did let fall a veil, revealing her face to the entranced audience. Maybe a shapely forearm, the silhouette of a bosom, the elegance of a bare ankle? But she wasn’t doing anything without a reward, and Herod Antipas smiled at his step-daughter and promised her anything her little heart desired – as long as it did not exceed half his kingdom.

So Salome danced. And danced. And once she was done, she rushed out to her mother and whispered. “What reward should I ask for, Mama?”
Herodias smiled and leaned closer. “Ask for John the Baptist’s head.”
Did Salome recoil? Did she gasp a “What?!!?”
We do not know.
What we do know is that according to the gospels, she did just that, and Herod Antipas, bound by his promise to her and with all his guests as witnesses had no choice but to comply. A while later, John’s head was presented to the princess atop a platter. This, I hope, is where she fainted. . . 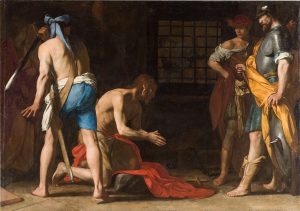 Herodias, I imagine, was happy. Herod Antipas not so much, especially as beheading John caused his subjects to grumble—loudly. Plus, there was his ex-father-in-law to contend with, because by now Aretas was taking the field, demanding retribution for the dishonour done to his daughter—and him—when Herod Antipas cast her off. War was looming, and while at first Herod Antipas could count with some Roman support, that changed when Tiberius died and was replaced by Caligula. “Support him?” Caligula snorted. “No way! Exile him, I say!”
Which, dear peeps, is exactly what happened. Herod Antipas and his Herodias were exiled to Gaul. How that went, where and when they died, well, we do not know.

As to Salome, not long after her famous dance she was wed to her very much older uncle, Philip the Tetrarch. Alternatively, Philip’s wife Salome wasn’t his niece but his half-sister (you know, Salome II, whom I wished a Happily Ever After). Seems unlikely, because while the Herodian dynasty happily married cousins and uncles and nieces, they rarely married siblings.

I’m not entirely sure Salome would have been all that thrilled with having a husband forty years her senior, but fortunately for her, Philip died some years into the marriage, leaving the then twenty-year-old  Salome to wed again. In keeping with the proud Herodian traditions, she married. . .taa-daa. . . a close relative, in this case her first cousin, Aristobulus of Chalcis. They were probably of an age, and she would go on to give him at least three sons.

Maybe there were some hot nights when Salome swept herself in veils and danced for her husband. As the cicadas chirped, as the moon rose high, she danced and danced, shedding one veil after the other. Maybe, with him she needed no other reward than the appreciation in his eyes, the caresses of his hands on her blushing skin. Maybe she had to close her eyes for an instant and swallow repeatedly to banish the thought of that other dance and that macabre reward she demanded at the say so of her mother. Or maybe she just shrugged, consigning John the Baptist to the irrelevant people no one truly missed. Huh: I guess she got that one wrong, right?